7 Kommentare December 6, 2019by Thorben
Hey, guys! Just a heads up: The linked offer is already a bit older and the price of the gadget might have changed or it might not be available anymore.

Current smartphones often resemble each other almost 1:1 and differ at most in the solution to the “front camera problem”. Another silhouette, even though strongly copied by Blackberry, is offered by the Uniherz Titan. The smartphone with “real” keyboard and touchscreen even offers a waterproof outdoor design. Technical data of the Unihertz Titan

The best of both worlds

At first glance you can see that this is based on the well-known and sometimes very popular Blackberry design. With a width of 92.5 mm, the mobile phone offers quite different dimensions than current smartphones, but with “only” 15.3 cm in height it is somewhat shorter than, for example, a Xiaomi Mi 9T. The smartphone is roughly divided into two elements: the touchscreen display and the keyboard. Above the display, however, there is a very thick screen edge that offers space for the logo and the front camera.

The touch screen display offers a diagonal of 4.6 inches and a high resolution of 1430 x 1438 pixels, so the screen is almost square. The pixel density is even 441 ppi, thus pixels per inch. This is definitely an above average value. But apparently it is an IPS panel and not an AMOLED. This also explains why the fingerprint sensor is located above the keyboard, in the middle between two function keys left and right. The fingerprint sensor also serves as a trackpad. However, Unihertz integrates a “Multi-Language Switch” in the upper right corner, which probably makes it easy to set the keyboard to QWERTY. Then you only have to get used to it a bit. There is also a menu key, a back key and a shift key. The keyboard also has a backlight.

On the back, the outdoor design is completed with a metal element around the dual camera. Otherwise you keep the mobile phone relatively simple, mostly in black combined with the mentioned elements. What’s special about this is that the phone also offers water resistance according to the IP67 standard and can therefore fall into the sink. It is also dustproof and protected against light impacts. So you can also use the Unihertz Titan for an outdoor adventure. But you have to live with the 303 g total weight. The Titan doesn’t really have a processor worthy of a “Titan”, but still a very solid Helio P60 processor from MediaTek. The Octa-Core with 2 GHz, for example, has shown in the UMIDIGI F1 that it offers more than enough power for everyday use. In addition there is a proud 6 GB LPDDR4X RAM and 128 GB internal memory, which can also be expanded in the hybrid SIM slot.

The battery offers a capacity of 6000 mAh, which is a proud value considering the small display and should provide an above-average long runtime. The battery can even be charged wirelessly, but it’s faster with the USB-C cable. Unihertz also produces the uCable, which shows the current and voltage on a small display.

The dual camera on the back consists of a 16 megapixel sensor and a secondary sensor whose resolution is not specified. This is probably a portrait sensor for additional image information. The front allows 8 Megapixel Selfies. On the Uniherz Titan runs Android 9, which looks a lot like Stock Android and probably only gets by with its own icon pack. This even makes Face Unlock possible. The “outdoor keyboard smartphone” offers almost the full range of connection possibilities: Dual Band ac-WiFi, GPS, Beidou, GLONASS, Bluetooth 4.1, USB Type-C, LTE and even NFC. The SIM slot is a hybrid SIM slot. This means that it can accommodate either two Nano-SIM cards or one Nano-SIM card and one microSD card. 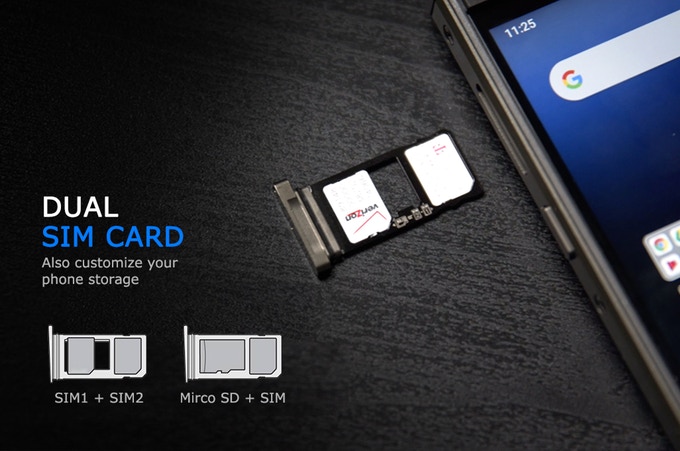 The Unihertz Titan brings several worlds and demands together. The Chinese company combines the business design of a Blackberry with the outdoor appeal of a Blackview without sacrificing luxury features such as NFC or wireless charging. In general, you don’t have to do much without it, only the camera is probably a little behind today’s standard. In addition, the phone is a bit clunky, but also seems to be difficult to destroy.

The crowdfunding campaigns for the Unihertz Titan have already ended, and the smartphone will be launched next year. At Kickstarter the first backers got it for $240, the selling price will be around $360. Uniherz is already selling the Unihertz Atom over Amazon for $260, so the Titan will probably be available there as well.