0 Kommentare October 4, 2019by Jens
Hey, guys! Just a heads up: The linked offer is already a bit older and the price of the gadget might have changed or it might not be available anymore.

Now that winter is indeed coming, this mug is able to hold all your nice and hot tea, soup or any other hot drink without tipping over. The Fiu Grave is available at AliExpress for $16.98.

This cup won’t fall over. At least this is what the advertising promises. For clumsy people who like to knock over the coffee cup this might be the perfect invention. 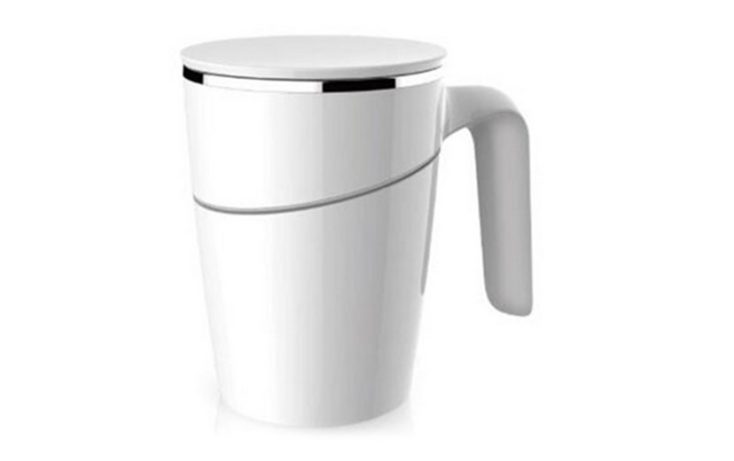 Personally I remember a nice experience in my apartment when I knocked a glass of white wine on my desk over and tilted it completely into my computer fan next to the table. Surprising realization: My computer doesn’t like white wine. I don’t know if I would drink wine from this cup from now on, but that would have saved me the mishap.

The Mighty Mug has already shown the principle of this mug a while ago. We hadn’t tried it out ourselves, and many comments criticized the plastic interior and the poor (because high) thermal conductivity: The cup itself became much too hot. The Grace cup now makes both a bit better.

There’s not much to say about that. What you see is what you get. On the outside the cup is mostly white, apart from a narrow metal strip on the edge below the lid. It merges seamlessly into the interior, which is also made of metal – more precisely – 304 stainless steel. The exterior is made of plastic. Only the underside has an eye-catching colour, which is, however, rarely seen. It consists of silicone and is kept in bright orange. 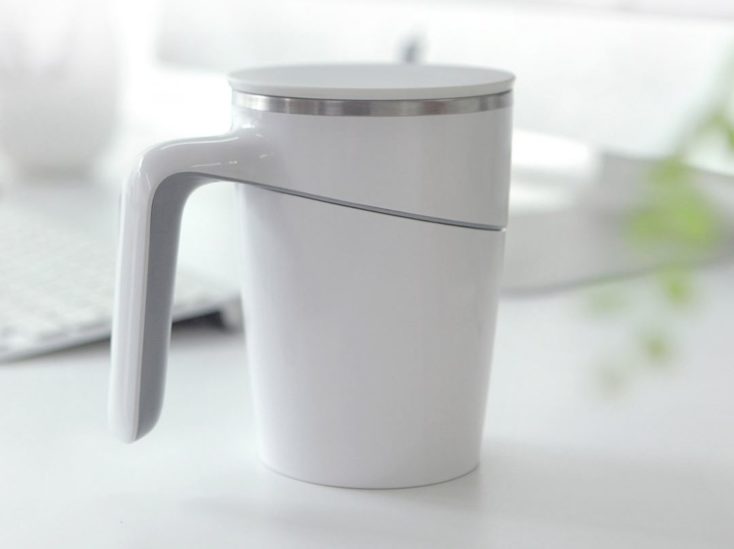 In fact, the cup consists of two parts that have been inserted into each other. If you lift the cup by the handle, there is always a gap of about four millimetres. The fact that these are two layers also benefits the temperature development. We simply did the test with boiling water. The cup gets noticeably warm, but never so hot that it would be unpleasant. At the same time, the drink remains warm/hot for a little longer, even if one cannot yet speak of a thermo cup.

The construction from two parts has of course a purpose. If the cup is placed on a smooth surface, the lowering of the upper part creates a vacuum under the cup. This causes it to suck on the table and cannot be lifted or tilted over without considerable effort. If you try to lift the cup below the handle, nothing happens. Lateral blows also cause the cup to shake, but cannot harm it. But if you lift the cup by the handle, it can be lifted completely without effort, because the vacuum is released. If you haven’t tried it, it may sound hard to imagine, but it works just as described. It takes a powerful, swinging blow to really knock the mug over. The suction even works so well that you can tilt the cup or even stick it to a vertical wall.

Conclusion: Is the cup worth its money?

The Fiu Grace cup definitely delivers what it promises, albeit with limitations. Because it really needs a smooth surface for it to work. The worktop in the kitchen, glass tables or even smooth wood are no problem. However, uneven surfaces or wood with deep grain do not work.

Nevertheless, we really like the cup so far. If you like the design and don’t want to accidentally spill your drink, you can buy the cup.