Telephoning with the finger: The SGNL wristband with sound transmission over the bones 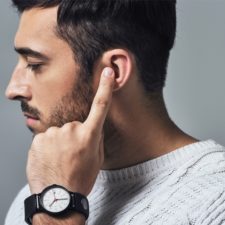 Hey, guys! Just a heads up: The linked offer is already a bit older and the price of the gadget might have changed or it might not be available anymore.

Imagine the following situation: A young man is walking past you talking in town with his finger in his ear. First thought is that he is not quite right in his mind. But what sounds unimaginable today could soon become reality with the SGNL bracelet. Thanks to the SGNL wristband, your mobile phone can stay in your pocket when you’re on the phone and it doesn’t have to be stalled all the time.

The bracelet is currently still a kickstarter project but will soon become reality.

The company, which emerged from Samsung’s research department, recently presented its wristband, which enables the user to make phone calls “without” a smartphone thanks to bone sound transmission. The technology is not new, because it is also often used in headphones or headsets.

Sound transmission via the bones is very useful when you have to perceive the ambient noise, for example to communicate on a motorcycle. Because the sound doesn’t go through your ears but through your skull bone, you’ll hear everything that happens around it. Admittedly, it all sounds very bizarre and looks the same. It may be good, but the idea is not wrong at all.

The SGNL bracelet is connected to the user’s smartphone via Bluetooth and is intended to replace the strap of a watch. The secret of the futuristic bracelet lies in a small rubber dome on the inside of the bracelet, which transmits the sound to the index finger using the arm and hand bones.

If you put your finger in your ear, you should actually hear the call from the other person. The other person should also understand you well thanks to the microphone built into the band. Logically, because with the finger in the ear the band is directly in front of the mouth.

The sound quality and volume can be corrected and adjusted with the SGNL strap and index finger. The bracelet should be worn on the right arm.
Of course, the strap can be adjusted in size by removing and adding links.

The existing tests all describe a high pressure which needs getting used to but should be highly essential for sound quality and volume. The SGNL bracelet will be available in different widths to be able to use it with as many watches as possible and should it not fit on the watch, you can wear it like a fitness bracelet.

Now I’m looking forward to your opinion: Absolute nonsense or the telephony of the future?

Write it in the comments! ;D