Apparently it is becoming more and more of a problem in Japan that Apple fans drop their expensive AirPods at the train station and never see them again afterwards. Panasonic has now addressed this problem and developed a kind of vacuum cleaner that allows you to vacuum headphones off the train tracks without having to walk on them. 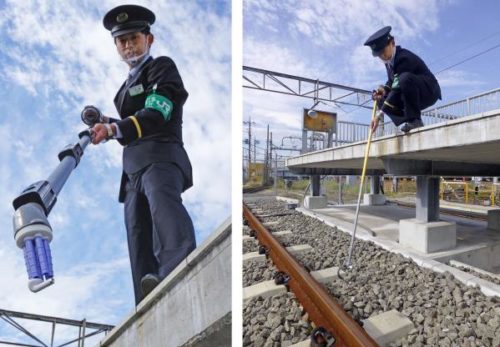 What sounds like fake news is absolute reality. In cooperation with the East Japan Railway Company, one of seven successors to the Japanese state railroad and one of the world’s largest passenger railroad companies, Panasonic is working on a battery vacuum cleaner for headphones. According to Japanese media reports, it would normally and impractically use grippers to pick up the small headphones that often end up in the rail bed. This is of course a rather annoying fiddling job for the railroad employees.

The East Japan Railway Company cites alarming figures: 950 such headphone incidents were recorded in 78 different stations between July and September. However, those who wish to have their lost headphones back will not be entirely happy with this information: The trackbeds are probably currently being cleared of this kind of jewelry after the last train one day. So many of the expensive losses should probably never find their way back to their owners. So maybe you should rather rely on cheaper Airpod alternatives and securing straps.

Whether the vacuum cleaners will also find their way to us is unclear. There are currently no clear figures on how many Airpods and Co. are lost at train stations. Panasonic is known for the development of consumer electronics, personal care products, telecommunications and household appliances. That the Japanese manufacturer would one day be working on something like this would probably not have been expected by those responsible for the Group itself.

Yes, this is certainly not the most important news of the year, but we thought you might find it as interesting / funny / odd as we do. So we didn’t want to withhold this information from you and hope that you will forgive us. 😉

Hand on heart: Who has ever lost his headphones at the train station?