0 Kommentare May 20, 2018 by Maike
Hey, guys! Just a heads up: The linked offer is already a bit older and the price of the gadget might have changed or it might not be available anymore.

Everybody knows the feeling when the alarm clock pulls you out of your sleep in the morning. You’re tired and annoyed by the shrill alarm sound. Getting up with the daylight clock, which simulates the sun, should be more comfortable. That one can wake up by sunrays is obvious, but can an alarm clock simulate the natural sun? Find out in our test of the Vava smart alarm clock. 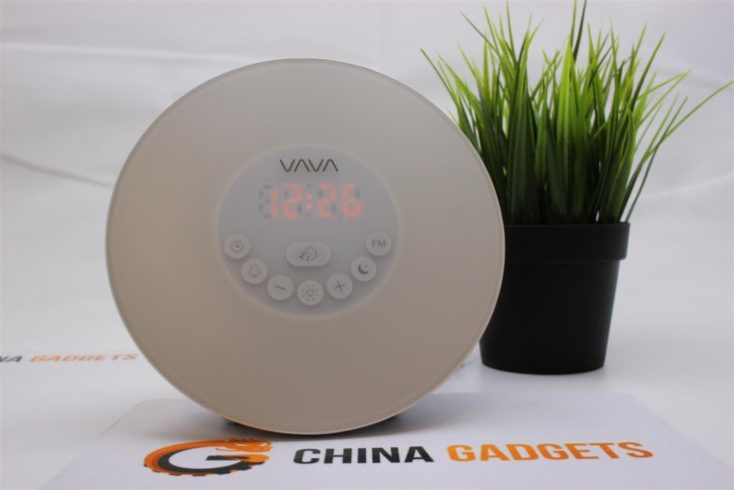 The smart alarm clock comes in a box, on which the product is shown. The box contains a manual, 3 AAA batteries, a power supply, a MicroUSB cable and the alarm clock itself. Nice that the optional batteries are included here. 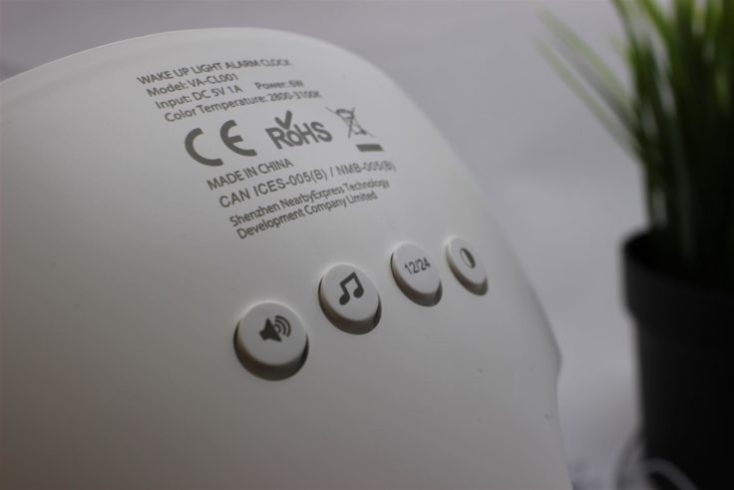 Just like the sun, the alarm clock is circular. The material used is white plastic, some of which lets the light shine through. On the front is the display, eight touch-sensitive buttons and the light ring. On the top side there are 4 additional buttons. A kind of handle is attached to the back, under which the battery compartment and the speaker cover are located.

The main feature of an alarm clock is of course, as its name suggests, the alarm function. The special feature of this alarm clock is that it wakes you up with light. In contrast to other alarm clocks, which only start to sound at alarm time, the light alarm clock starts half an hour earlier. First it switches the light on at a low brightness until it reaches full light intensity at the wake-up time. If the light does not wake you up, the light alarm clock also uses a normal alarm tone. You can choose between 7 wake-up tones, one of which can be assigned a radio station. All morning grouches are taken care of, when the snooze button is pressed the alarm tone is repeated in 5 minutes. However, the light remains activated despite the snooze button. If you are used to the alarm clock knowing when it is weekend and automatically deactivating the alarm, please keep in mind that you have to manually turn off the alarm clock of this gadget.

The light ring cannot only be used for the alarm function. If you press the middle button on the front, where you can see a sun, you can activate the light simply like this. A further press of the button switches to a coloured light. With the plus and minus keys you can then choose one of the 7 colours. Since the plus and minus keys are already assigned in the color version, it is not possible to set the light intensity.

Another way to use the alarm clock is with the sunset function. Here you can set a time just like the alarm clock. The difference here is that the light continues to decrease 30 minutes before the entered time. So you can plan your own little sunset.

The loudspeaker of the light alarm clock is not only used for the alarm tone. You can also listen to the radio through him. Just press the FM button and the radio will sound. The sound will not win a prize, but it will be enough for this use. The only annoying thing is that the display of the radio frequency replaces the time and you can’t read what time it is.

If the power supply via MicroUSB fails, the alarm clock can continue to operate with limited functionality. The alarm function via an alarm tone and the FM radio continue to function without problems. However, the night light can no longer be switched on. The time display can also only be briefly displayed by pressing a button. A power connection is recommended, but you are not stuck in case of a power failure. 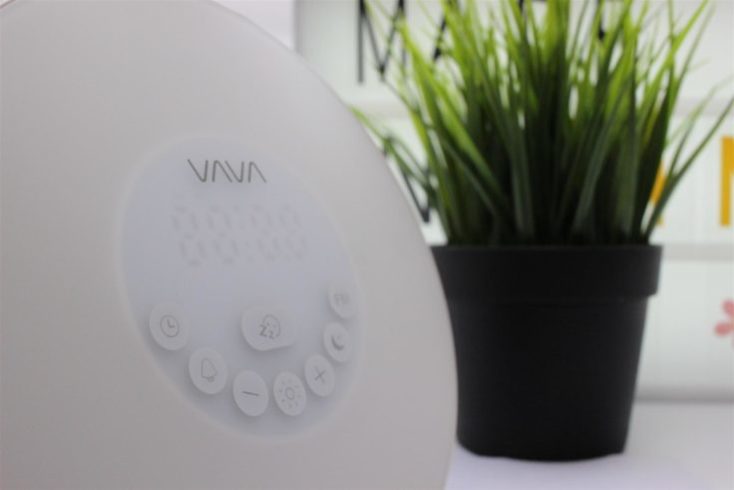 First of all, perhaps I should report on my sleeping behaviour to do justice to the alarm clock. If the sun shines with full power in my bedroom in summer, I’m usually not very interested in it. Alarm clocks also take a few seconds to get my attention. You realize the alarm clock had a tough opponent. So I wasn’t surprised that the light alone didn’t wake me. But I have to say that I felt my eyes were waking up more comfortably. Of course, this can also only be a placebo. But you can hear from other people and evaluations that they are awakened by the light and describe it as pleasant. So it depends on your person and, as is well known, trying is more than studying.

Even if the alarm clock didn’t manage to wake me with its light, I definitely liked it better than traditional clock radios. The night light function is practical if there is no light at the bed and the light switch is not yet equipped with voice control. The battery compartment is also practical so as not to oversleep in the event of a power failure. Who still swears on physical alarm clocks, should try the light alarm clock once. But the smartphone alarm group may also find a more comfortable way to get up here. At least those who don’t sleep like a rock.