0 Kommentare May 21, 2018 by Maike
Hey, guys! Just a heads up: The linked offer is already a bit older and the price of the gadget might have changed or it might not be available anymore.

Vernee is no longer a blank page and some devices have already found their way into our editorial office. Even with the low-budget Vernee Thor E smartphone, the battery is in the main focus. With the new model, the Vernee Thor Plus, the manufacturer is concentrating even more on the battery and promises a battery life of one week. We tested it for you. 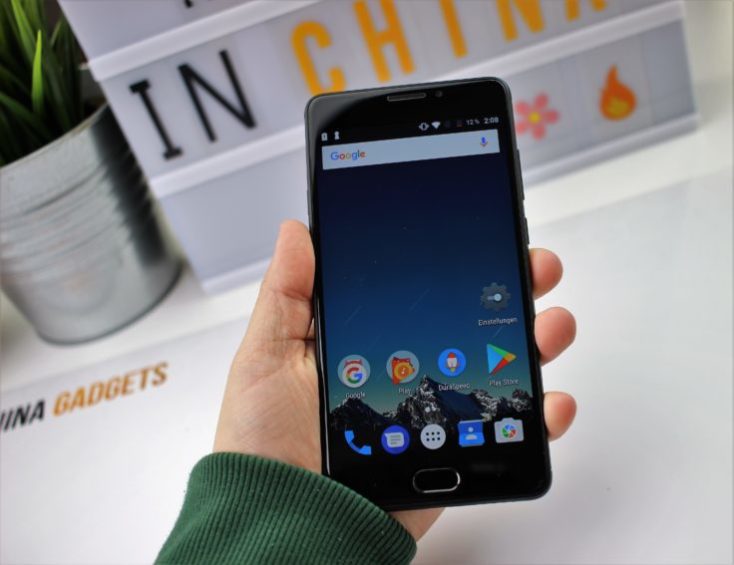 With dimensions of 15.3 x 7.6 x 0.87 cm, it resembles the Ulefone Power, which is also equipped with an almost equally large battery, but is significantly thinner. The weight of 188 g is also slightly lower. The 5.5 inch AMOLED display with slightly rounded edges is set in a matt metallic housing. Unfortunately, the display does not resolve in Full HD, but the AMOLED displays are known for their color fidelity. Below the display is the fingerprint sensor, which is to unlock the screen within 0.1 seconds. And indeed, unlocking the smartphone is very fast. The edges of the metal body are slightly rounded on the back, which makes the Thor Plus comfortable to hold in daily use.

The Vernee Thor Plus uses MediaTek’s MTK6753, in which eight cores clock at 1.3 GHz each. Due to the lower clock rate, the processor works much more economically, which of course plays well into the cards of the Thor Plus as a battery-powered smartphone. The corresponding graphics chip is the Mali-T720, but this CPU is already two years old and therefore not too modern anymore. With 3 GB RAM the smartphone is equipped with enough memory for everyday applications. Graphically highly sophisticated apps are less popular. The 32 GB internal memory, on the other hand, is a little smaller. Fortunately, this can be expanded by 128 GB using a MicroSD card. The benchmark test results reflect the average hardware.

As already mentioned, however, the focus of the Vernee Thor Plus is on battery performance. 6.200 mAh battery capacity are already a house number and are actually only exceeded by the Oukitel K10000 Pro or by a Nokia 3310. Battery capacity does not directly require a longer battery life. Vernee is probably also aware of this and has accordingly adapted Android with its own VOS ( Vernee OS) to regulate the energy consumption. In addition, the Thor Plus has an Endurance mode, which should not elicit more than 15% of its charge per day from the permanently installed battery. In this mode, the phone is limited to black and white colour reproduction and the use of only six selected apps. Allegedly, a runtime of one week is possible. However, this did not prove to be correct in the test. In any case, the runtime tests only show a slightly longer runtime.

Vernee doesn’t follow the trend of dual lens cameras and only gives the Thor Plus one camera lens on the back and one on the front. While the main camera has a resolution of 13 megapixels and an f/2.0 aperture, the front camera offers a resolution of eight megapixels. Here, too, the now obligatory beauty mode is not omitted. The photos of Thor Plus are okay. If the lighting is reasonably good, photos can be taken properly. However, in difficult lighting conditions or darkness, the camera cannot be used at all. The photos below are much too dark, if you compare this with the Vernee M5 (same motives and light conditions) it becomes especially clear.

Also with the USB connection Vernee shows up rather conservatively and remains with the well-tried Micro USB connection. The large battery is charged using a 9V 2A 18W Pump Express 2.0 charger. A full charge therefore only takes about 90 minutes. Rural network coverage is also provided by LTE.

Otherwise the Vernee Thor Plus shows up rather modest regarding the extras. GPS, WiFi 802.11a/b/g/n and a fingerprint sensor are now part of the standard repertoire of every China mobile phone. Just as the scope of delivery is rather spartan and limited to the most necessary. After all, the manual is in English.

The Vernee Thor Plus clearly presents itself as a smartphone with enormous battery power. In the test, however, this assertion proves to be unjustified. Nevertheless, a good runtime cannot be denied. However, the advertised battery life of one week is by no means reached. Apart from this feature, the Thor Plus is probably in the lower midfield in terms of features such as performance or camera. On average, the Vernee Thor Plus is a large smartphone with a nice display, good battery life, Pump Express and smooth handling. This smartphone should be especially interesting for people who don’t need to see it every night to recharge their device to get through the next day and not expect too much from this. For the price range you get a decent smartphone with an average camera.