5 Kommentare February 8, 2018 by Maike
Hey, guys! Just a heads up: The linked offer is already a bit older and the price of the gadget might have changed or it might not be available anymore.

Following the first outdoor smartphone of the Chinese manufacturer, the Vernee Active, the successor shall be revealed at the Mobile World Congress (we will be there for you!). But instead of Vernee Active 2, it will be named Vernee V2. We were lucky to be able to put our hands on one of the first test samples in China, in addition to taking pictures of it. But can a successor even deliver useful improvements on such short notice? 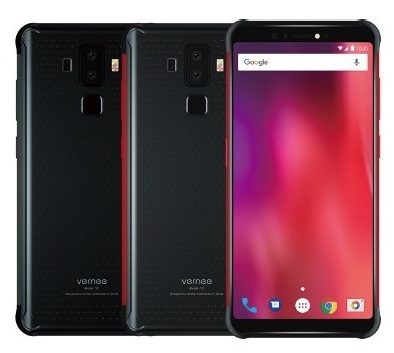 The predecessor already didn’t look much like a classic outdoor smartphone, even though one could see its resilience, it did seem a bit more classy than other ones. The V2 continues with this classy design as it doesn’t come with the usual metallic back cover with loads of screws, but rather a really simple, dotted backside. Likewise, the lateral edges are made of metal (in red or black), whereas the top and bottom are made of rubber. 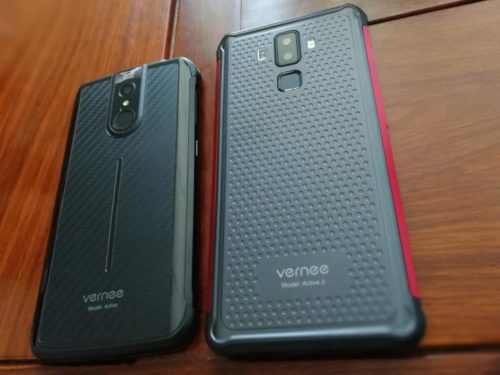 Weight and exact measurements are still unknown to us, but as we can tell from the pictures the V2 is a little bit longer than its predecessor. Probably because a 5.99 inch display was used, giving us a trendy aspect ratio of 18:9. The LC-Display has a resolution of 2160 x 1080 pixel and a pixel density of 403 PPI.

Hidden inside the V2, is the new and currently very popular Helio P23 from MediaTek. With its octa-core and 2,0 GHz, it provides enough power for a good performance. Great graphics will be provided by the Mali-G71 MP2 GPU with 770MHz. I was able to test this System-on-a-Chip lately with the UleFone Power 3, where the results were better than a few Helio P25 SoC. There are two configuration possibilities with RAM and internal memory: either 4 GB RAM and 64 GB memory or 6 GB and 128 GB. 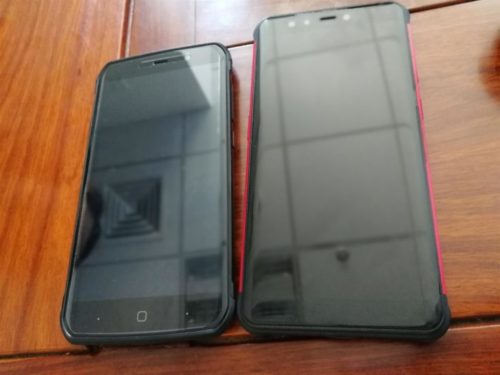 Compared to the predecessor, the amount of cameras has been doubled so that there are two cameras on each the front and the back. A flashlight is also integrated in the front and the back for the perfect selfies. Pictures are taken with the 13 or 5 megapixel camera, whereby the secondary camera would solely be for the portrait mode. The same goes for the front camera and the secondary 5 MP camera. The smartphone is powered by a huge 6.000 mAh battery pack, promising a long runtime. The complete charging time is supposed to take between 150 and 200 minutes.

Concerning connectivity, Vernee implements most of the common connectivity types such as bluetooth, GPS, NFC and the LTE band 1 / 3 / 7 and 20.  Furthermore USB-C is built-in. Unfortunatly, it is unknown whether an infrared sensor or a headphone jack are installed. The system is operating on Android 8.1. 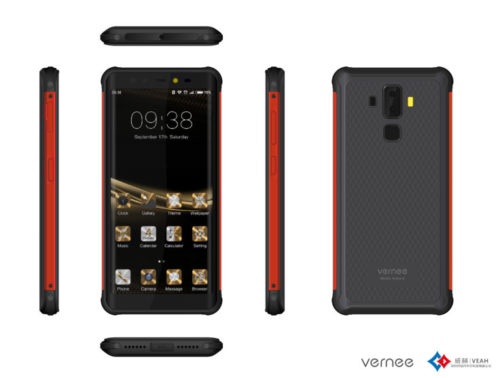 The fingerprint sensor is positioned on the backside of the smartphone beneath the camera. Furthermore the smartphone has a IP-68-rating, meaning it’s water- and dustproof. A really interesting feature of the Vernee V2 is the embedded pulse monitor next to the main camera. The official presentation of the Vernee V2 and the price will be at the MWC at the end of february.

All in all the Vernee V2 makes a really good first impression. Especially the red design on the sides is a real eyecatcher. In particular considering the other typical outdoor smartphones. The Helio P23 has proven itself to be a solid performer and in combination with the huge battery pack a long runtime can be expected. A missing headphone jack could be a disappointment, but we will see if that turns out to be true at the MWC (as we will be there!).

What do you think of the Vernee V2 and the new feature of the pulse monitor? Useful for an outdoor smartphone?