11 Kommentare June 17, 2019by Tim
Hey, guys! Just a heads up: The linked offer is already a bit older and the price of the gadget might have changed or it might not be available anymore.

Viomi usually produces kitchen appliances such as air purifiers for the refrigerator. Their second model comes at a very inopportune time – after all, several new top models have just come onto the market from Xiaomi. But the technical data gives reason to hope that Viomi would also like to compete for the vacuum robot throne. We tested it. 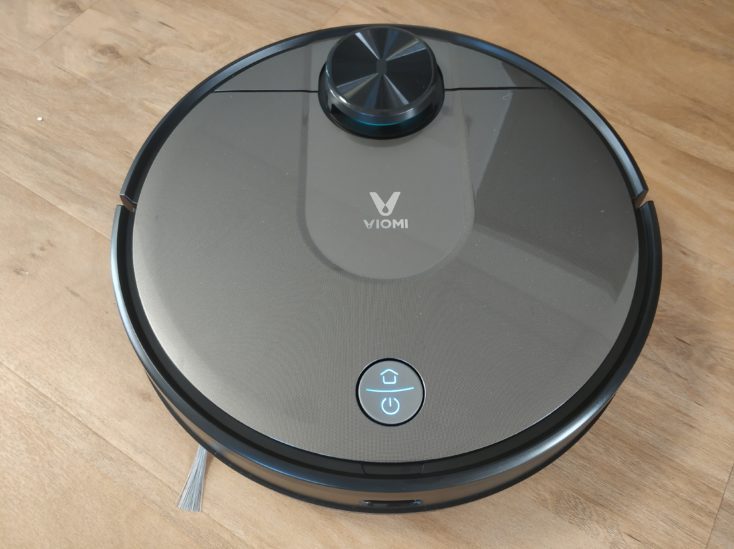 The predecessor VXRS01 also had a hard to remember product name, as did the new model. For simplicity’s sake, we will call it V2 instead of “V-RVCLM21B”.

To bring with the Mi Robot 1S a regular successor for the first generation? Absolutely sensible. For those who want to spend more money on all the technical gadgets, the RoboRock S6 out? Also still comprehensible. But a third vacuum robot in just a few weeks, and then the anything but hotly anticipated successor to the Viomi VXRS01? It’s rather confusing.

Why doesn’t Xiaomi bring out the robots bit by bit every three months? Then all models sell and it would be clear. Are the manufacturers perhaps not so closely interwoven? A business model that cannot be understood directly. Nevertheless, the technical data speaks for a genuine internal Xiaomi competitor. But can it also prove itself in our review?

Scope of delivery of the Viomi V2

The scope of delivery includes besides the vacuum robot:

Unpacking the package is a lot of fun as the scope of delivery is very minimalistic and simple. As you know it from products of the Xiaomi ecosystem. But you can also say: A little more accessories (brush heads etc.) would have been nice.

Design is always a matter of taste, of course. Unlike other models, however, we in the editorial team agreed that the Viomi V2 really looks good. The plastic used in the production makes a very high-quality impression, the laser tower on the top pleases the tech design heart and the grey-black-dark green colour choice should appeal to most people. Even the first generation was visually successful, at least that’s what the Viomi stock corporation can do.

Since I have tested the Mi Robot 1S before the Viomi, I find the workmanship there a bit better. The curves of the front bumper and the surface are even finer. But that’s a high level of complaining, the V2 is definitely positive from this point of view.

With the power button on the upper side you switch the robot on and off, start and stop it. With the other button you send it back to the charging station. From experience one will use the buttons only rarely or not at all.

Our model is the international version, which you can also get when ordering from the shops linked above. Accordingly you will find a CE-mark on the underside. I personally don’t care, but many of you don’t, as you can read from the comments again and again.

Measuring 35.0 x 35.0 x 9.45 cm, the vacuum robot – like most models with a laser distance sensor – has grown quite tall, so you have to decide beforehand by re-measuring whether the robot is suitable for the four walls. Again and again you notice that people are annoyed that the round household helper does not get under the bed or sofa. Measure beforehand and don’t be surprised. The weight of 3.3 kg is average and trivial.

Depending on the company’s update policy, this can be particularly worthwhile, as in addition to bug fixes and optimizations, new functions are also released from time to time. After some time, for example, the Mi Robot received the zoned cleanup feature and the Alexa controller via a firmware update.

After a loading time of 3-4 hours, the vacuum robot is ready for operation for a working time of 2 hours. This time varies depending on the suction level set in the app. Of course, the running time of the 3200 mAh battery also depends on the conditions in the four walls. The more dirt there is in the corners, the more power the battery will lose, etc. Logical.

Functions of the new vacuum robot

While the first generation was mostly just chic to look at (but not much more), the second generation comes with a whole armada of features:

The multi-room cleaning of the new Xiaomi vacuum robots Mi Robot 1S and RoboRock S6, that the AI of the robot automatically divides the entire area into different areas and that individual working times can be defined for each room, is not included. Instead, specially created areas can be defined and drawn on the map. These can be equipped with virtual walls that the robot does not run over and completely forbidden zones.

Of course, the usual vacuum robot functions such as automatic retrieval of the charging station and detection of gaps are also part of the game.

Navigation, sensors and operation of the Viomi V2

Like most high-priced and powerful vacuum robots today, the Viomi V2 navigates via laser distance sensor (LDS). The Viomi scans the obstacles in front of it and creates a virtual map on which it draws the outlines of the furniture and other obstacles.

A laser room measurement does not only have advantages. Here is a short overview in tabular form:

To support navigation, we have included the SLAM algorithm (Simultaneous Localization And Mapping), which is mandatory for vacuum robots with mapping, in the software package. Via the wall sensors on the side, the robot knows what is next to it and accordingly knows when and how far it can turn without docking. The collision sensors prevent frontal collisions and falls from heights, such as steps.

The working method in detail

The Viomi V2 proceeds as follows when cleaning from the charging station (important for mapping!):

Anyone who now thinks, “Hmm, I know that from somewhere” is not wrong. The Xiaomi and Roborock vacuum robots work according to the same principle. In general, it’s no longer advisable to buy a model that doesn’t run straight through your home. The principle of chaos in smaller flats does fulfil its purpose as far as possible, but not always every area in the four walls is driven off and cleaned accordingly.

The Viomi V2 works with a brush head as we know it from the Xiaomi vacuum robots. On the underside there is a main brush that works in “V-shape”, as it is called in vacuum robot marketing, with rubber lamellas and bristles alternately.

Of course, an exciting factor is also the 2150 pa suction power, which is the highest measured value for a vacuum robot to date. Thus the V2 leaves the in-house competition at least in this point behind, even if one does not really notice the difference. In a direct comparison with the Roborock S6 and Mi Robot 1S, the Viomi failes a little bit: Both last mentioned models vacuumed up more dirt, dust and placed garbage.

Within the app you have the choice between different suction levels. Volume and suction power data are available. Since vacuum robots are supposed to work while we are on the road, the operating volume plays a subordinate role, but even at the highest suction level the V2 with 69 dB is still very quiet compared to other models. Comparison with us humans: We talk at an average volume of 60 dB.

The Viomi Robot App: Integration into the WLAN

After downloading the Viomi Robot App (Android, iOS) and registering via disposable/spam mail address, the vacuum robot must still be integrated into the app and the WLAN. As always, please note: Vacuum robots can only be connected to 2.4 GHz networks, but the current WLAN standard is 5 GHz. So you have to change the network if it does not transmit on both frequencies at the same time (which most do).

But now the clou: There are two types of models of the Viomi V2. One can be connected via Mi Home App, one with the Viomi Robot App. Now our model is obviously one of the two types that can be connected to the Mi Home app. Fact is: The Viomi V2 is not yet unlocked in the Mi Home App, not yet available. This will change within the next one or two weeks, according to the manufacturer.

Of course we will keep you up to date and extend and revise the test in the near future. The following steps have to be done in theory to connect the robot with the WLAN and the app:

Functions within the app

The individual features and functions within the app are listed:

Wipe function of the Viomi V2

Wiping functions with vacuum robots: A never-ending, mostly sad game. Most of the time, the round household helpers pull a mop on the underside behind them, making the floor somewhat damp, but fail due to real stains and coarser dirt. With the Viomi V2 the next challenger enters the ring, so that he gets the title of Narwal Vacuum Robot. For all others I would wish the wipe function away, so that the total price for the respective model sinks.

The preparation of the wipe function in a series of pictures:

In fact, this wiping function is also the usual procedure for a vacuum robot (at least without app) as described above.

The app may give you better control over how much water from the water tank lands on the microfiber cloth and on the ground. But the wiping function is not recommended and not an argument to buy. I recommend the Narwal or Deebot Ozmo 930.

It’s a bit like a tech fair at the moment: No matter where you look, new models are being promoted everywhere. Now also Viomi, the company that is somehow associated with Xiaomi. It’s not only hard to keep track, it’s also hard to continue to react euphorically to new robots.

I read a comment in a forum in which someone wrote that he always has this ” want to have-feeling ” with all products from the Xiaomi universe, only not with those of the brand Viomi. Somehow I feel the same way, even though I can’t explain it exactly. The spark simply doesn’t want to jump over, although the Viomi V2 has everything you’d expect from a vacuum robot. Is it perhaps due to the direct comparison with the other top models?

While Xiaomi takes multi-room cleaning to a new level with the Mi Robot 1S and RoboRock S6, Narwal Robotics launches the world’s first self-cleaning robot, the technical achievements of the Viomi VXRS01 are a bit poor. But the app rating is still pending, so the Viomi V2 can still collect a few points.

The brand Viomi: Meaningless or interesting for you?