5 Kommentare January 9, 2019by Jens
Hey, guys! Just a heads up: The linked offer is already a bit older and the price of the gadget might have changed or it might not be available anymore.

At first glance, the Visuo XS816 is another budget drone in the Mavic design. A special feature, however, is the second camera, which is located under the drone. In addition to the front camera, it is also possible to film vertically downwards during the flight. 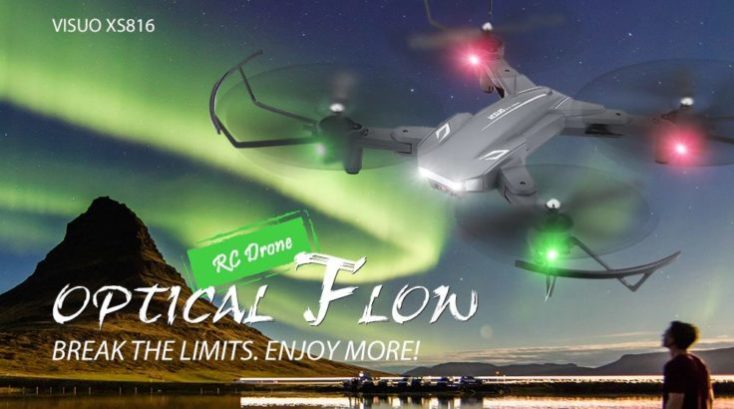 We had already had contact with the VISUO models of the manufacturer Tianqu in the past. The XS816 is based on the DJI Mavic Pro – a trend not only followed by Visuo but also by many Chinese manufacturers. Accordingly there are again foldable arms. When folded, the drone is still wider than the expensive DJI drone, and the complete fairing is simple plastic.

On all four arms there are LEDs, green at the front and red at the back. As usual, the camera is located at the front, with a resolution of 720p again. There is no gimbal. But at the bottom there is a second camera. You can switch between the two cameras during the flight; the app even has a split screen mode that shows both images side by side. 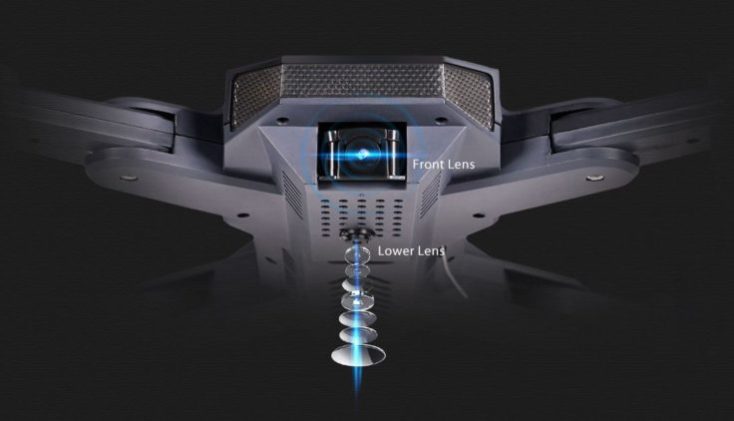 In addition to the two cameras, there are other features. For example, photos and videos can be triggered by hand gestures. An optical flow sensor ensures a stable position; the tracking function enables the drone to follow a marked person. All this is shown in the advertising video below. How well this works in reality remains to be seen. Especially the shown video recordings are sometimes much too good for the built-in camera.

But the battery is supposed to be a clear improvement to the previous models. With 1.800 mAh it has double the capacity and should allow flight times up to 20 minutes. The manufacturer promises quite a lot, we are curious whether this can be kept. 20 minutes would indeed be impressive.

Typically, a lot is promised here in graphics and videos. Shooting “like a professional cameraman” (GearBest) is not done with this. Nevertheless, some of the features, especially those around the two cameras and the larger battery, sound interesting enough to try them out. How do you rate the Visuo XS816?