VocalSkull Beyond 5 Bone Conduction Headphones with FM Transmitter for $69

0 Kommentare May 23, 2019by Jens
Hey, guys! Just a heads up: The linked offer is already a bit older and the price of the gadget might have changed or it might not be available anymore.

Bone Conduction headphones do not transmit sound through the air, but through vibration through the bones of the ear. The VocalSkull Beyond 5 wants to be such a headphone and doesn’t need classic ear studs. 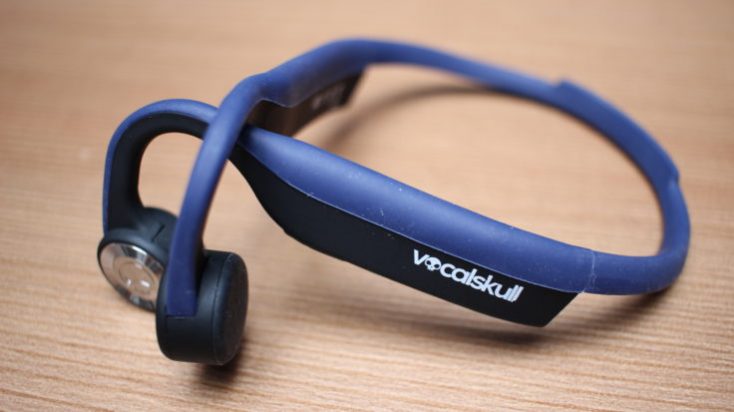 A while ago we tested the Alien 5 of the same manufacturer (VocalSkull, here the official website). These are sunglasses with an integrated loudspeaker that also use Bone Conduction technology. There the loudspeakers were in the temple of the glasses above the ears; here there is a neckband and the headphones sit in front of the ears. This construction is also found in almost all other Bone Conduction headphones. Unfortunately the model also loses an advantage of the glasses, but more about that later.

The design doesn’t differ much from other Bone Conduction headphones or generally wireless headphones with neckband. You can choose between dark blue and grey as colours, whereby the underside with the controls and the loudspeakers are black in both cases. There are three buttons to switch on and to turn up or down. 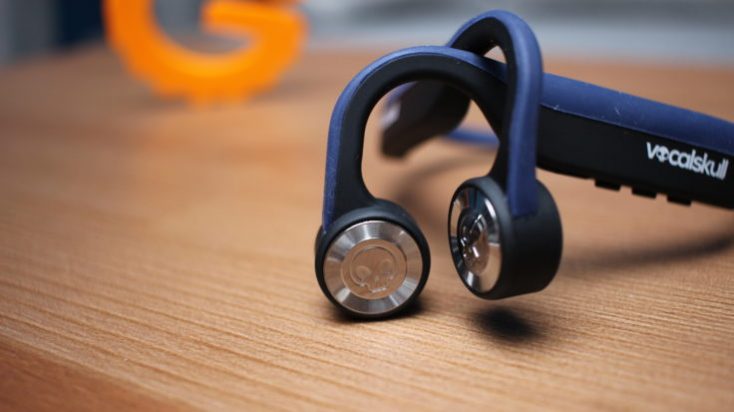 The bracket is flexible and rolled up in normal condition. This means that there is always a certain amount of tension, so that the temple does not sag and lies on the neck, but is always held by the ears. The 41 grams do not attract negative attention; the headphones are never too heavy. When I wear them, I constantly get the impression that the headphones are pressing too hard against the skull. At no time is this painful, but you notice that you are wearing the headphones all the time, while the Alien 5 sunglasses and even ordinary in-ear headphones go unnoticed. 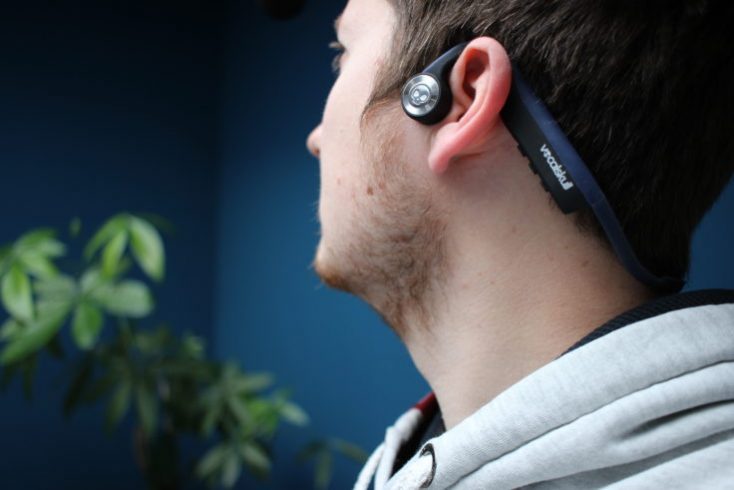 For me, the clearest difference to the glasses is the positioning of the headphones. They sit – as mentioned above – directly in front of the ear. What seems to be normal with Bone Conduction headphones was unusual for me at first, because I had just tried the glasses. There I found it pleasant that you could still have a normal conversation even with moderately turned up music, because the ears remained free.

This is no longer possible here, as the loudspeakers simply sit much closer to the ear. Although you can still hear the other person, the acoustic perception is extremely limited when you wear the Beyond 5 and listen to music. Well, that’s also the case with classic headphones, but I still don’t like it here because I actually want my ears free.

The surface is made of silicone, which is pleasant to the touch. A small disadvantage here is that the dust attracts almost magically. At the transition to the plastic parts, the material unfortunately protrudes a little, which is also not quite optimal. But the headphones are excellent as IP67, so they are waterproof even when diving for a short time.

Sound of the headphones

So let’s get straight to the sound. As with the Alien 5 sunglasses, I’m not sure how much it really is a transmission of sound via vibration. Just like with glasses, you can clearly hear the music if you hold your ear next to the speakers. So there are definitely loudspeakers built in here. This becomes particularly clear when you simply place the headphones directly on the ear instead of in front of it as intended, which makes the sound noticeably louder.

If it weren’t a bit uncomfortable (and it wouldn’t look strange), you could wear the Beyond 5 like ordinary headphones – with the same effect. To be fair, you have to say that the effect will wear off if you wear the headphones properly. Then the shielding to the outside works pretty well, and if you’re not standing right next to someone, nobody else listens to the music. 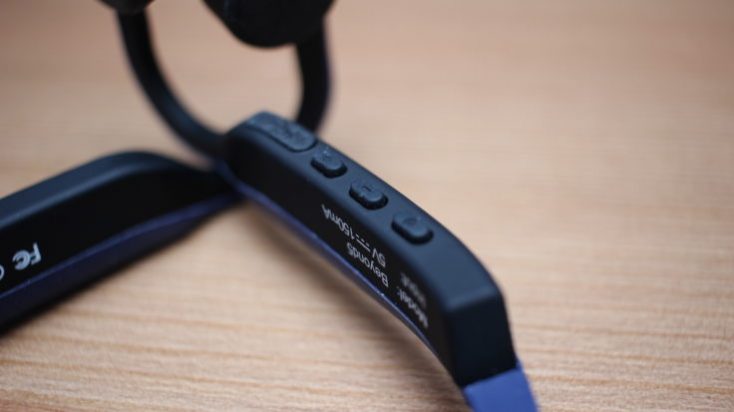 All in all, that doesn’t mean that the bone transfer thing doesn’t work at all. VocalSkull has included a pair of foam earplugs with the headphones. With this you can do the self-experiment and put the headphones to the test (of course you can also do it with your fingers in your ears). Even with earplugs in your ears, you can listen to music normally, even if you can’t hear anything else through your ears. The effect is really cool.

You will also notice an immediate difference if you lift the speakers only slightly: Then you hear less immediately. As soon as you re-establish contact and the headphones rest on the skull again, it gets much louder. Something works here in any case, I just don’t have the advantage over ordinary in-ear headphones, of which there are really enough good (and cheaper) models. 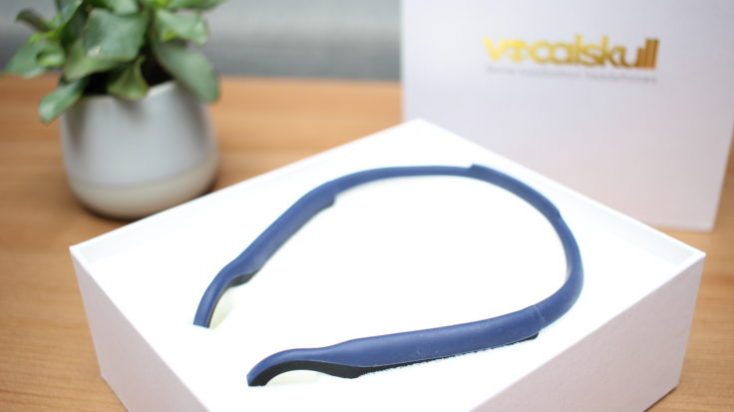 Now you don’t have to connect the headset to your mobile phone via Bluetooth to listen to music. You can also simply receive radio programs with it. To start the mode, you have to press the plus and minus button for two seconds (which is difficult for one hand, though). By the different frequencies one changes afterwards by holding down either the plus or the minus button.

This works quite well overall. You have to be patient until you find the desired station, but that’s the case with radio if you only have two buttons. Once you have set the desired station, you often don’t want to change it anyway, and then you receive good quality without strong noise. For me, it’s the most surprising feature and a plus point you won’t find in any other headphones. 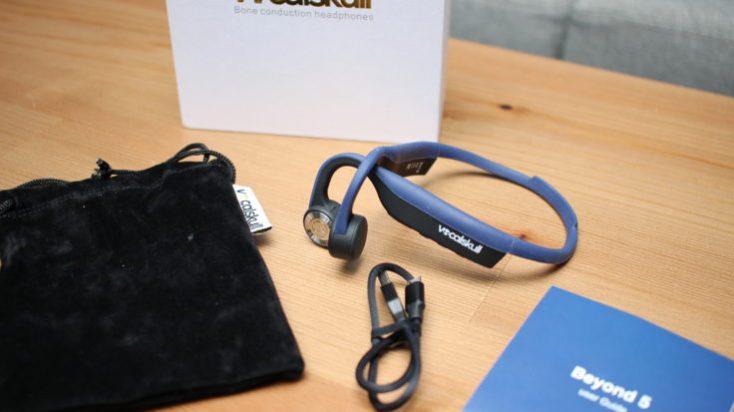 Since a microphone is also built in, calls can also be made with the headphones. Of course, a smartphone must be connected via Bluetooth. Then you can accept an incoming call with a short press on the power button. You understand the voice of the caller well, you are only slightly distorted but still clearly perceived. So you don’t have to take off the headphones to make a phone call.

I’m a little bit torn. On the one hand the technology is really cool and works somewhere (even if it’s not “real” bone conduction). On the other hand, I lack a bit of the real advantage over normal in-ear headphones. At least you can still hear loud ambient noises. And even if the sound here is a bit better than with the Alien 5 sunglasses and is also better shielded, the glasses still had something special about them (“What, you listen to music with the sunglasses?”), which the headphones are missing again. Really cool is the radio function, which is a little highlight of the headphones. Songs with a lot of bass just don’t bang enough, which is probably due to the underlying technology. 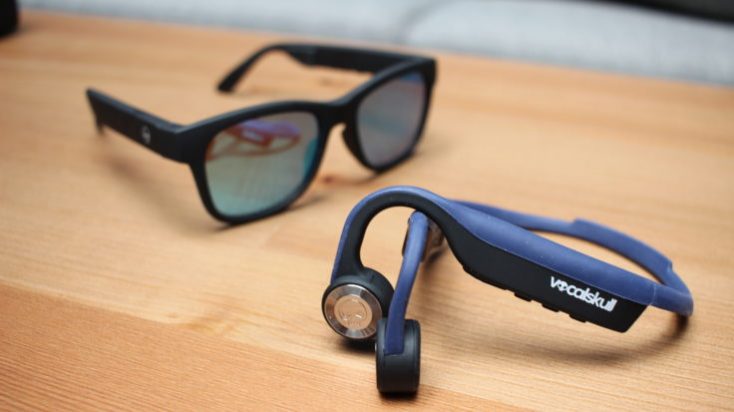 If you’re really looking for sports headphones, I think in-ear headphones are better. If you’re looking for Bluetooth instead of cables, we can recommend the Redmi Airdots as a completely wireless alternative. Only if you really want to enjoy the advantage of keeping your ears free and your surroundings more visible could the VocalSkull Beyond 5 be the right choice.

And on the other hand, none of these headphones have a built-in radio. So if you’re a passionate radio listener and you might even be interested in new technologies, you’ll find two more arguments for buying them.