1 Kommentare August 7, 2022by Jens
Hey, guys! Just a heads up: The linked offer is already a bit older and the price of the gadget might have changed or it might not be available anymore.

An LED projector with Full HD resolution for less than €150 sounds interesting. The Wanbo T2 Max is also extremely light, compact and equipped with a German Android operating system. Reason enough for us to take a closer look at the projector. 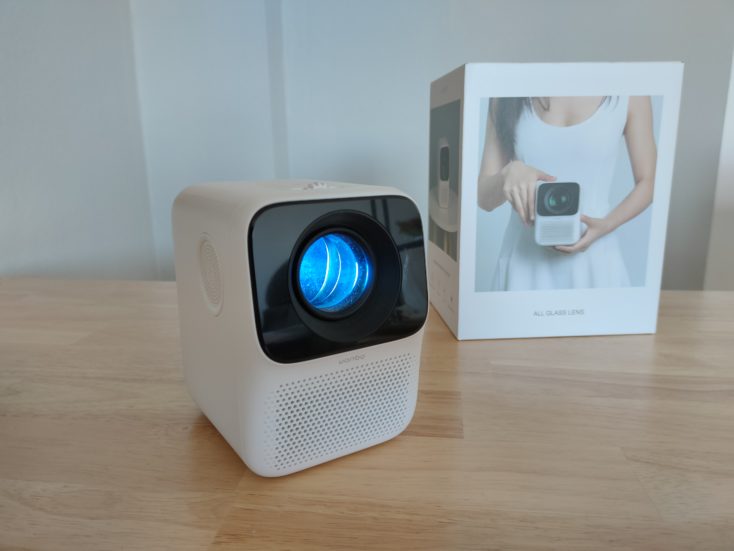 Tim had tried out the EZCast V3 for us a while ago, which was also a very small and inexpensive projector, but could only display 720p. For its money, it was okay, but not Full HD. The Wanbo T2 is sometimes called “Xiaomi Wanbo T2”, but it is not really from Xiaomi. However, it is sold on xiaomiyoupin.com in China and it cannot be ruled out that Xiaomi’s expertise in this field was used for the development.

The beamer is really “mini”. According to the official specifications, it is just 11 cm wide, 14 cm long and 15 cm high. With a weight of 900 g, it is also remarkably light. All this makes it flexible in use, of course. It doesn’t take up much space and can be quickly moved around, so it’s easy to take along.

When it comes to design, you don’t have many options with a projector. The lens has to be at the front, the ports at the back, which leaves the sides for the speakers. The only noticeable feature is that the Wanbo is more tall than wide, which distinguishes it from most other beamers. The same principle can also be found in the two small Xiaomi beamers, among others, one of which I have at home myself and which is quite suitable for comparison here.

Overall, I like the design here. The beamer is completely matte white, with the only exception being the glossy black area around the lens and a light gray around the ports on the back. On the bottom, we find a silver sticker with some technical information as well as the CE label. However, you usually do not see it anyway. 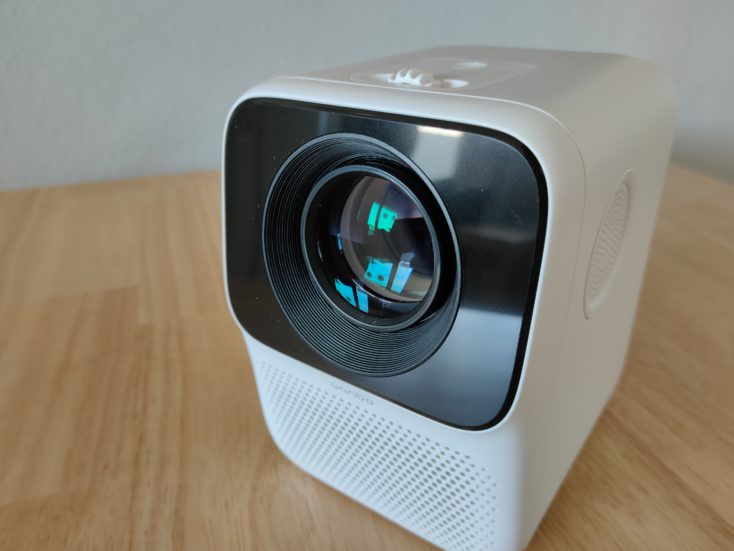 Four rubber studs on the bottom provide a non-slip stand, but they are not height-adjustable. There is a standard thread in the center to mount the projector on an appropriate tripod or upside down on the ceiling. 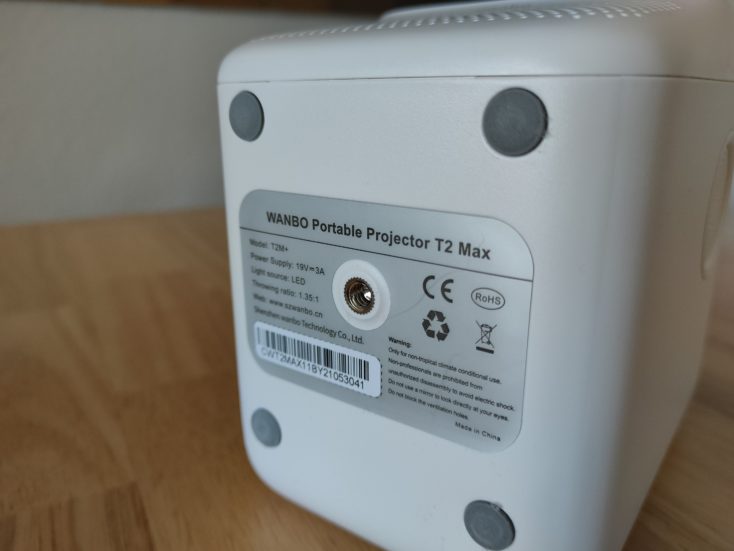 A few words about the build quality. Overall, it is good (and absolutely appropriate for the price), but not quite perfect. Especially the front and the center are neatly connected, but you can feel the somewhat unclean gaps between the back and the center, especially at the corners. This is hardly noticed visually, but it is noticeable when you touch it. Furthermore, the dial on the top wobbles and clatters when you move the projector. Only small things, but nevertheless.

The Wanbo T2 Max is limited to the essentials in its operation. The focus can be adjusted manually via a small wheel on the top. Directly behind it is the power button, the only button on the projector. 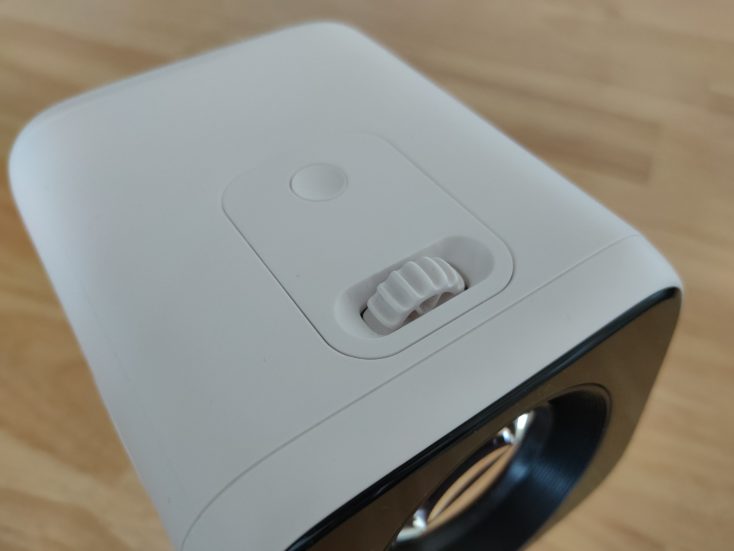 All settings are made with the included remote control. It needs two AAA batteries and does not have any other special features. A mouse pointer can be activated at the push of a button, which can then be controlled via directional keys, which can be advantageous in some apps. 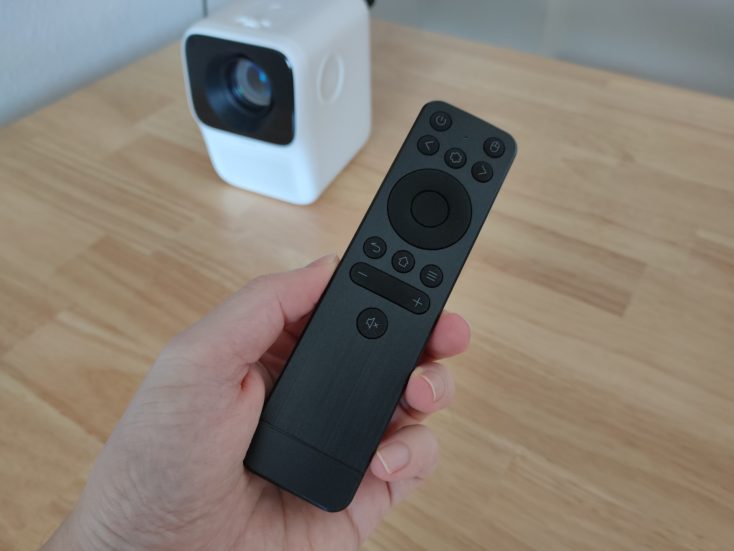 There is an HDMI port as well as a USB port on the back. Headphones can also be connected via an AUX port. Thus, you do not need an additional adapter. 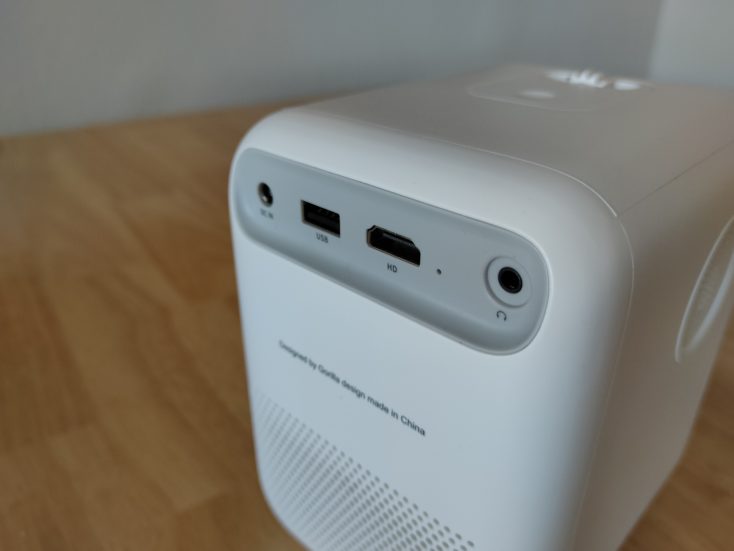 What is offered here is sufficient, but nothing more. Like on many cheap projectors, a version of Android 6 is used here. It is not only a bit outdated, but also not optimized for beamers. Thus, the menu item “About the phone” with system information is found in the settings.

The interface is simple with a few app sliders on the home page. YouTube recommendations are displayed here by default. Various video apps can be installed via an app store; Netflix and Amazon Video are already installed. Thanks to the 16 GB of storage, you also get all the necessary apps accommodated. 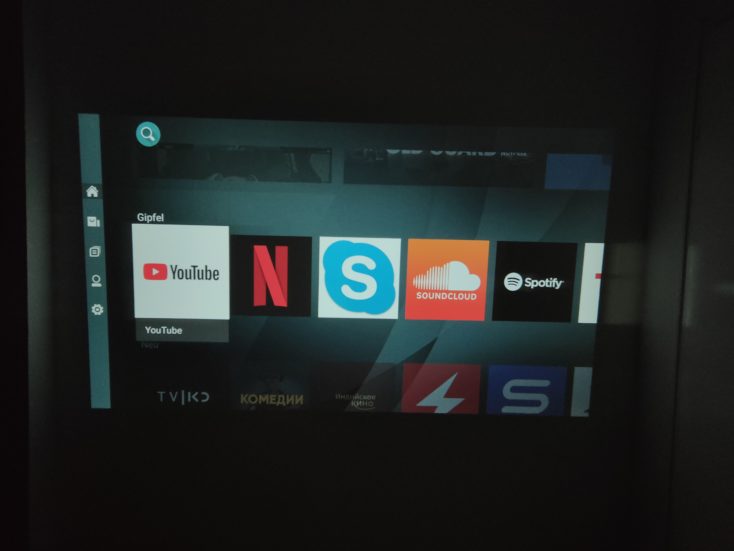 Some apps occasionally load a bit slowly, and not all of them are optimally adapted for operation with the remote control. The language can be changed to German, but not everything is perfectly translated (see “Summit” for “Top”(-Apps)). Within the apps, everything is partly in English anyway, and the small pop-up message that appears when you activate the mouse pointer is in Portuguese throughout. “Desativar” means deactivate, by the way, as I learned that way.

The brightness – more for the evening program

In terms of brightness, we need to clarify something right away. How lumens are measured unfortunately still differs from manufacturer to manufacturer, and in practice the actual brightness of the image also always depends on the environment and the screen. Almost all manufacturers gloss over the effective brightness here, and so does Wanbo or Banggood.

A while ago, you could still read something about 5000 lumens on the product page, an absurd value. In the meantime, Banggood speaks of 200 ANSI lumens, which is at least more realistic. There is no information about this on the projector itself, not in the manual and not on the packaging. Whatever value Wanbo measured themselves, it doesn’t seem to be good enough that they want to advertise with it.

In practice, it looks like the Wanbo T2 Max is rather unusable in daylight. You can use it, but you won’t be able to see much, especially with a screen size of more than 80 inches. However, it still works sufficiently well in well-darkened rooms and with a smaller picture. I was able to watch series on the projector during the day and was satisfied. Nevertheless, the picture comes into its own best in the greatest possible darkness. That is not bad, most of the time you watch especially movies rather late in the day, but you should know what you want. 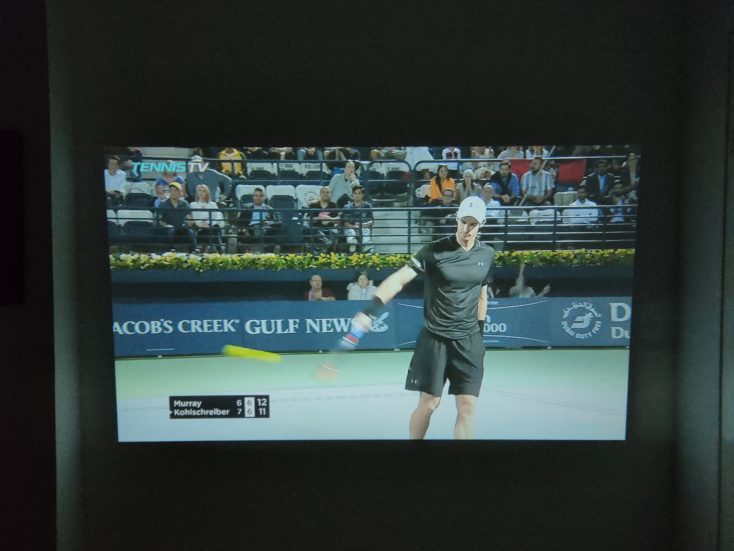 As mentioned, we are talking about LEDs as the light source here. As usual, they promise a particularly long lifespan of 20,000 hours. If they keep that, you will sooner have already disposed of the projector than having to replace the LEDs.

Unfortunately, many Chinese manufacturers still don’t cover themselves with glory when they advertise their HD projectors as “Full HD compatible” or even “4K capable”. It is not what videos can be played back, but what comes out in the end that is important. However, you really get real Full HD here. In times of 4K, this is no longer the optimum, but it is still completely okay for most applications.

But beware: There is also a Wanbo T2 (without “Max”), this model only supports 720p. If you want to buy the projector, don’t be tempted by the slightly lower price, but make sure you choose the right model.

Almost as important as the image quality of a projector is the volume of the fan. If it’s too loud, you can’t really enjoy even the most beautiful movie. Unfortunately, Wanbo doesn’t give any information about the volume, at least I couldn’t find it anywhere. However, I assume a bit over 30 dB, which is almost at the upper end of the scale. The volume is particularly noticeable next to the comparatively quiet Mijia beamer with 24 dB.

Especially late in the evening, when the sound is perhaps not turned up all the way, the fan is unfortunately already clearly audible. At some point, this becomes background noise, and it cannot be completely avoided with any beamer, but still. It’s less annoying at the appropriate volume of the movie, but in the end it remains one of the negative points that you have to put up with at the still quite low price.

While we’re on the subject of volume, let’s briefly talk about the speakers. Two 3 watt speakers are installed here, which sound according to expectations. In action scenes they are noticeably weak and lack the necessary bass, unfortunately they are completely unsuitable for music, but they are pleasingly okay in dialogues and especially in the midrange.

To cut a long story short: I watch sitcoms with it, but not Avengers. At least you can connect an external speaker via the AUX port.

Conclusion – Not a bad projector for its price

Is the Wanbo T2 Max a good projector? For the price you pay, yes; however, a few small points of criticism remain. First of all, there’s the fan, which wouldn’t get any quieter if the projector cost another 50€ less. Unfortunately, you have to live with that, even if it’s not a knockout criterion for me. The operating system is not necessarily bad, but somehow not the real thing either. In the end, I always connected my laptop, on which it is easier to use Netflix and the like. I don’t blame the somewhat weak brightness on the projector; you simply have to pay a lot more for a really bright projector.

However, the fact that a lot of information is left out of the data sheet, be it the brightness or the fan volume, is simply unnecessary and doesn’t exactly improve the reputation of many cheap Chinese products. Thus, the product simply feels “cheaper” than its nice exterior first suggests.

So when can you buy the Wanbo T2 Max? If you have an upper limit of 150€, then you probably won’t get anything much better. The Full HD resolution still looks really good under 100 inches; the brightness is also no longer a problem in the dark. If you like the design and don’t want your projector to look like an office/conference/classroom, the Wanbo T2 Max is a good option.