0 Kommentare August 28, 2021by Jens
Hey, guys! Just a heads up: The linked offer is already a bit older and the price of the gadget might have changed or it might not be available anymore.

The Wanbo X1 is a simple projector for little money that is supposed to be long-lasting thanks to LEDs and at least has a resolution of 720p. The price is clearly in the foreground here. What you get for your money and for whom the projector is something, we will tell you in our review. Unlike the T2 Max, the Wanbo X1 looks like a normal beamer that you would find in any office or lecture hall. Sure, in terms of design, it is a bit prettified. Smooth surfaces, few details and plain white as the defining color – it looks nice for such an inexpensive device. However, you probably won’t care after the first look. It looks okay and you don’t have to hide it in the box after use. 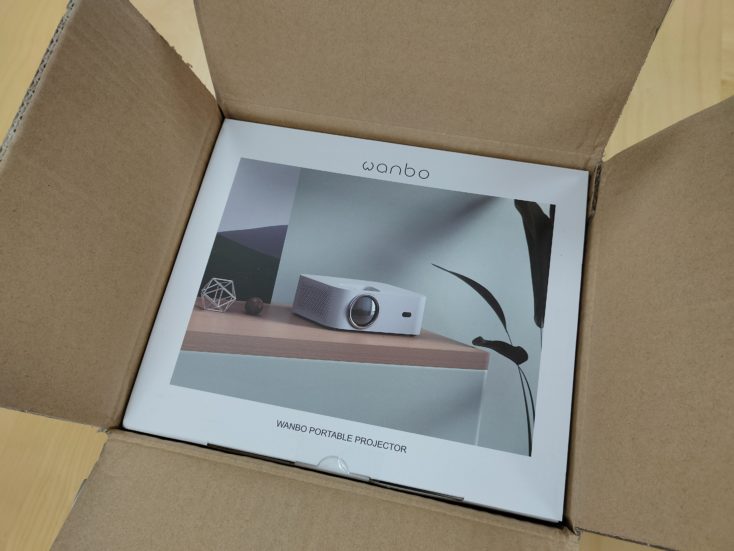 On the top, besides a few (also white) buttons for operation, we only find the wheel for adjusting the sharpness. Strictly speaking, we have two separate wheels here. One tilts the lens minimally up or down to compensate for the tilt of the beamer when you tilt it slightly. By the way, you have to put a book or something similar underneath for this in the classic way, because the projector doesn’t have adjustable feet. 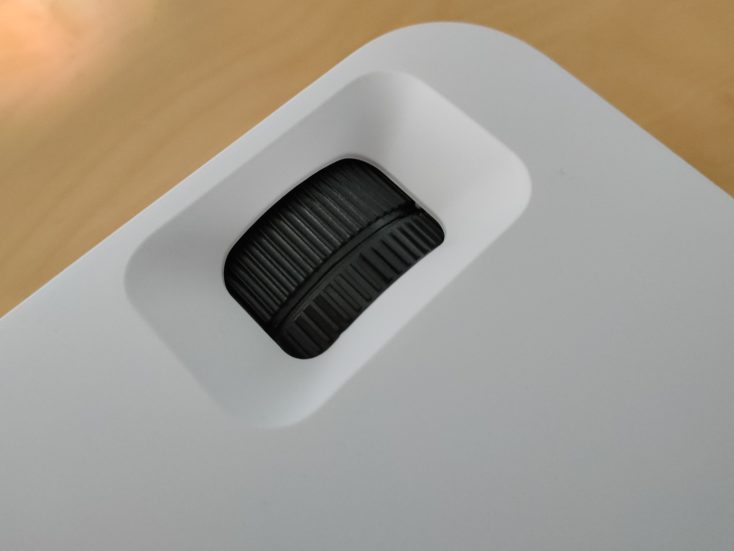 This also brings us to the underside, where we see those feet. The four studs are always rubberized and thus reasonably slip-proof. In the middle, there is an ordinary thread to attach the X1 to a tripod or under the ceiling. There is also a sticker with technical data and CE mark. 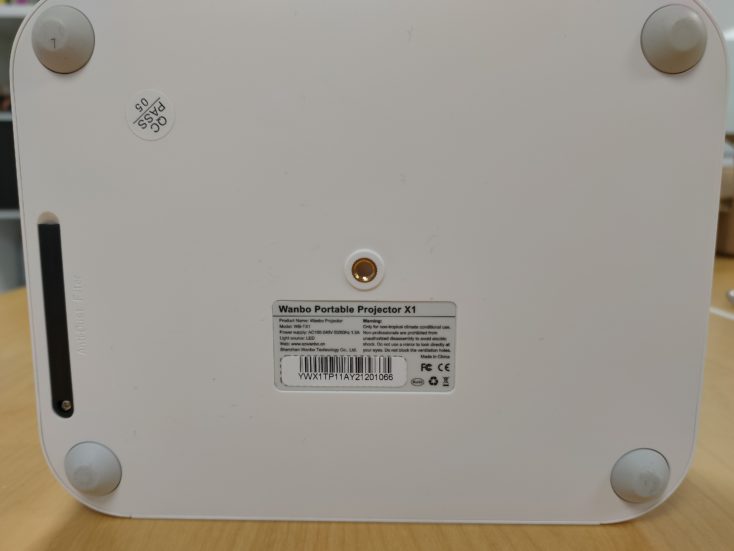 On the back, there is one HDMI and USB port each, as well as AV and headphone jack. A “dust filter” is installed in the fan on the side. You can also remove it, it’s a piece of foam in a plastic holder. How well it works now I can not say, but I had no problems with dust in the beamer. 🙂 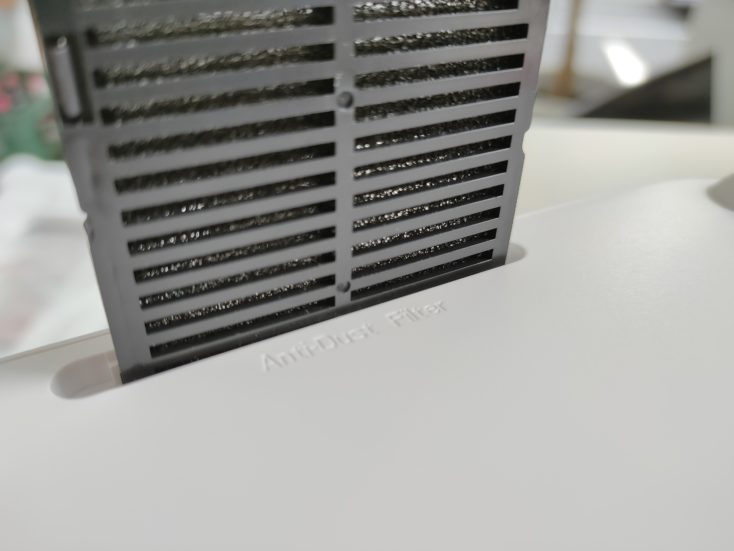 A few words about the accessories. There is a 1.5 m long power cable with German power plug, which is wonderful. Remote control and manual (English) are fine. The HDMI cable is 30 cm long, which unfortunately will almost never be enough to connect a laptop with it and set it up reasonably. The AV cable is, well, nice. Maybe someone else will use it. 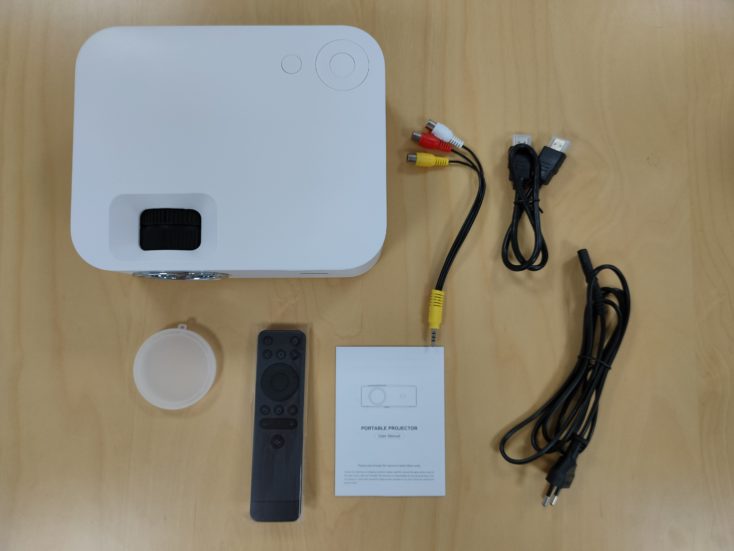 You’ll probably use the remote control first and foremost, even though the necessary buttons are also available on the projector itself. Not all buttons are assigned on the remote, actually it’s just about navigation with the direction buttons as well as “OK” and “back”. There are a few settings, such as selectable color profiles (warm, cold, medium), the aspect ratio or sound settings. The options for the sound are a bit odd, as you can change the sound to “Surround” or “SRS TruSurround XT”. Sounds wacky, but between off and surround I can’t tell the difference. In the XT option, it’s supposed to be 360° sound. For me, the speaker then just sounds louder. There is no operating system here, after switching on (which takes a few seconds), a simple menu awaits you directly, in which you can select the input signal. Thus, an additional device that is connected via HDMI is absolutely necessary. If you have pictures or videos on a USB stick, you can also play them from there. 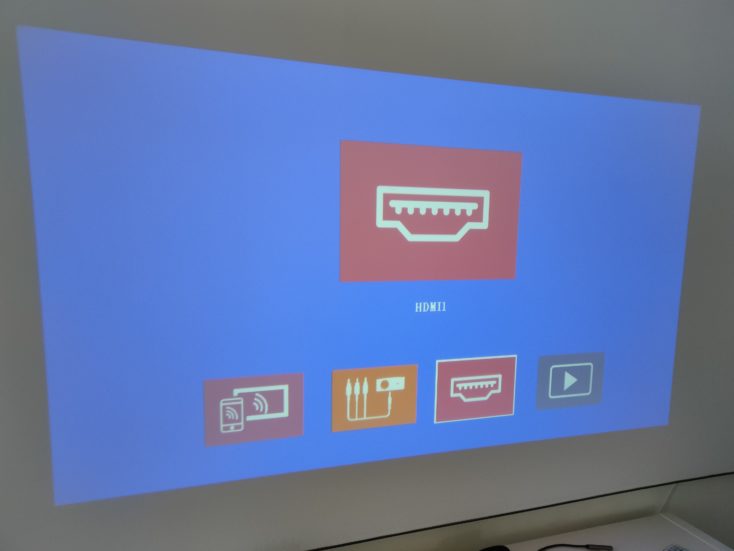 I don’t even mind the missing OS. With some Chinese projectors, the operating system is often either really bad, only available in Chinese or does not support the required apps (Netflix, Disney+, etc). My Xiaomi Mijia Projector, which I’m very happy with, has a Chinese OS that I can use halfway in English, but I still use it exclusively with a laptop connected.

The resolution of the projector is 1280 x 720p, commonly called HD. You simply won’t pick anyone up with that nowadays, when new TVs offer 4K by default. Of course, this is also due to the price, and a projector doesn’t have to come close to the resolution of a screen either, but Full HD should still be it. It doesn’t cost that much more. Full HD content can be played back without any problems, after all. 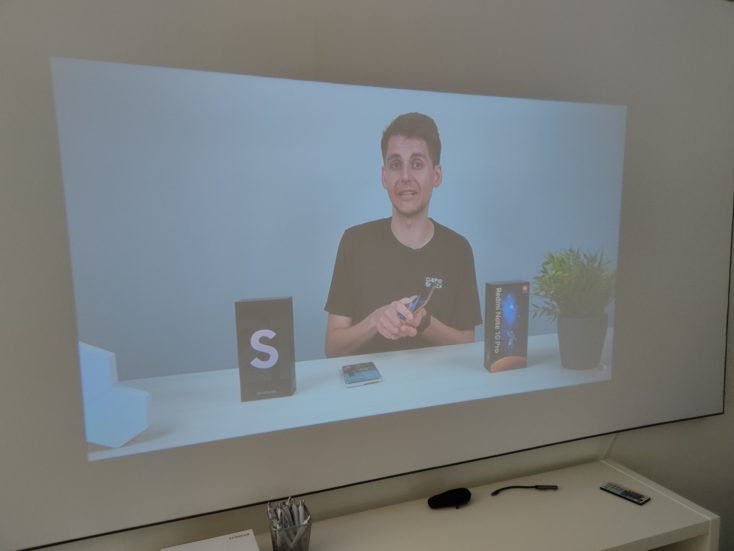 The picture looks “good” for 720p, and I also like the colors. Unfortunately, the projector is not really bright, especially with a larger screen. The manufacturer states 300 ANSI lumens, but in practice the picture is simply not bright enough in daylight. The photos were taken in daylight, but in a relatively darkened room. Therefore, I can hardly advise a larger screen than 80 inches. 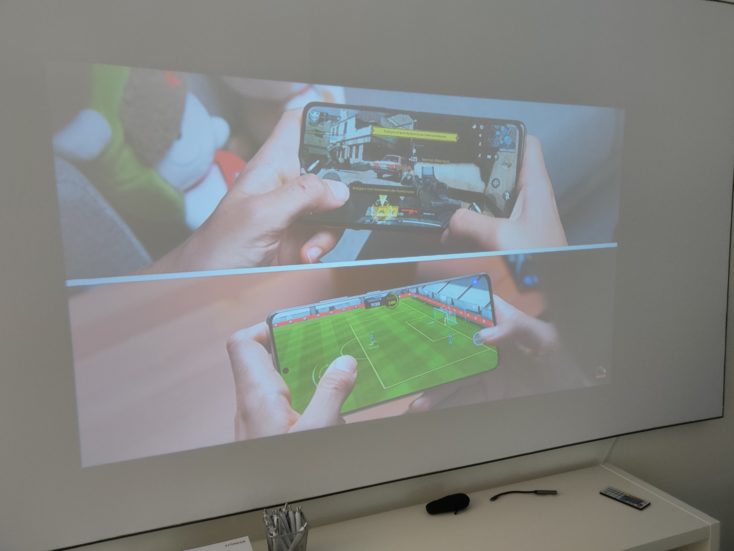 There is a kind of keystone correction in that the lens can be tilted slightly. Minimally, you can compensate if the projector is tilted up or down.

Another thing worth mentioning is the fan, which isn’t unbearably loud, but can hardly be overheard at normal sound settings (without this surround thing). By the way, the beamer gets very warm quickly despite the fan.

The Wanbo X1 is not bad, but somehow not good either. If you’re happy with 720p and a projector that you can only use perfectly after the sun goes down, you’ll probably get by with the X1. Of course, $105 for a durable LED beamer is not a bad price either. However, I don’t know why you should be satisfied with that when you can also get better devices for hardly any more money. I wouldn’t buy a 720p beamer anymore simply out of principle. You could probably just buy any noname product on Amazon, comparable devices aren’t much more expensive there either.

I found the Wanbo T2 Max better, which offers Full HD for $70 more, even if it is similarly bright.