2 Kommentare February 28, 2019by Tim
Hey, guys! Just a heads up: The linked offer is already a bit older and the price of the gadget might have changed or it might not be available anymore.

“Oh Fido, we’ve been outside three times today.” Especially for those dog owners whose dogs just never get tired, this gadget could give some time on the couch: The Wickedbone dog play bone can be steered simply by App, however, is not quite cheap. 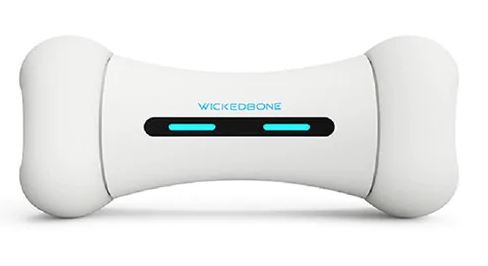 The new playmate for the four-legged friend?

Wicked, wicked, wicked. The functionality of this 15.1 x 6.4 x 6.4 cm small silicone play bone is quickly explained: The 300 g light bone can not only be steered in its movements, but also has a few more complicated actions in store. Let’s list the individual movements that can be selected by app (Android, iOS):

So the dog should run after the bone, play with it and interact. What seems a little strange are the 12 different emotional interactions that the bone offers via app. The bone should be able to communicate with the pets. How well this works is questionable. See for yourself:

According to the manufacturer, the bone is made of FDA-compliant materials (FDA is the Food and Drug Administration) and should be safe for animals to bite. Of course each animal is different and each dog is different strong or playful. Although the bone should be very stable, one can well imagine that some dogs will not treat it too lightly. Surely there are one or the other dog who gets the bone destroyed after a short time. After all, even small dogs like Chihuahuas can do something with the play equipment, even if they probably can’t pick up the bone in their mouth. Simply backflashing is also fun.

Who is the gadget for?

The target group of this former Kickstarter game bone is relatively clear: people who don’t always have enough time for their pets – or who can’t always generate enough energy. There is even an “autoplay function” for this, so that the bone keeps the four-legged friends occupied independently. In this mode it reacts to touches and adjusts its movements accordingly. After a loading time of only 1 hour, the small bone is ready for the following working (or playing) times:

In order to be able to clean the bone after some game units, the “hoops”, i.e. the lateral ends of the bone, can be removed. So you can simply clean the toy under the tap. Practically it would be that one could start the bone also from on the way, for instance if the day in the office becomes longer again. With vacuum robots or surveillance cameras, this has been possible for quite some time, would also be conceivable or at least useful here. However, since the device is connected via Bluetooth, this is not possible.

In itself, the principle is relatively simple and probably fulfils its purpose. But two questions have to be asked: Do I really need the device and is it worth around $100? In itself applies: For my four-legged friend nothing is too expensive to me. Just under $100 for an app-controlled bone then seems quite steep. In addition the use of the gadget depends very much on the respective animal. Not every dog reacts positively to electronic playmates, especially to inspire cats, is an art in itself.