0 Kommentare October 12, 2021by Jens
Hey, guys! Just a heads up: The linked offer is already a bit older and the price of the gadget might have changed or it might not be available anymore.

You have to look pretty closely to find anything special about beamers. Cheap models, whether with HD or Full HD, are a dime a dozen, and 90% of them look the same. The XGIMI Elfin stands out from other beamers at least visually, but it also offers enough interesting points with Android TV 10.0, automatic keystone correction and 800 lumens of brightness. 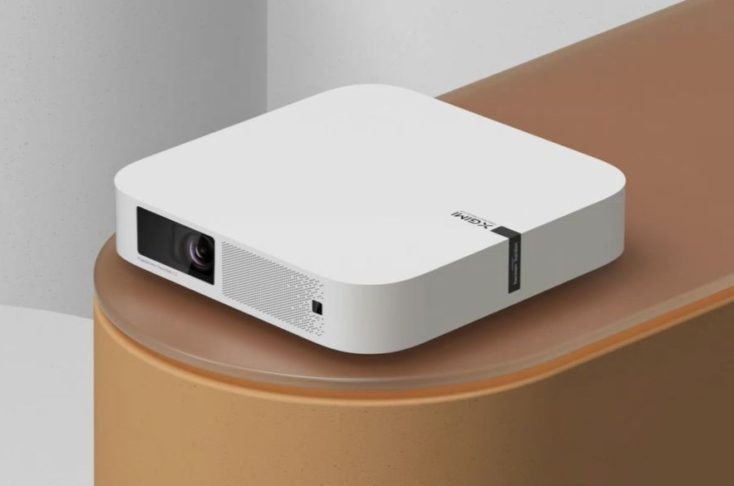 The box doesn’t quite give you an idea of how slim the projector really is in the end. But one thing after the other. After opening, you look directly at the projector, which is still protected from scratches by a plastic film. Below that, the cables, the remote control and the manual are in three smaller compartments.

That is also all the accessories that are included. Unfortunately, there is no HDMI cable, but probably everyone who owns a device that can potentially be connected to the projector should have one at home. Otherwise, you can easily find HDMI cables on Amazon.

The power cord has a Schuko plug. However, XGIMI does not have any problems here. The manual is written in several languages, and all parts have a CE mark, of course.

Probably due to the small size of the beamer, we have an external power supply here; so, strictly speaking, we have two cables. The actual power cable is 1.10 m long and has a C6 plug, so you can optionally use a longer cable with the same plug here if you find that too short.

To the actual projector and the most striking feature: The XGIMI Elfin is quite small. Flat, to be exact. It is just 5 cm high and measures 19.2 x 19.4 cm in width and length. Strictly speaking, it does take up some space, since the footprint is not much smaller than that of other “conventional” projectors. But it is especially flat and fits into any shelf, no matter how low it is.

This also makes it comparatively easy to transport. “Light” is a keyword at all, because 900 grams of weight are also below average. Whether it’s a backpack or a handbag, you can pack the Elfin easily. 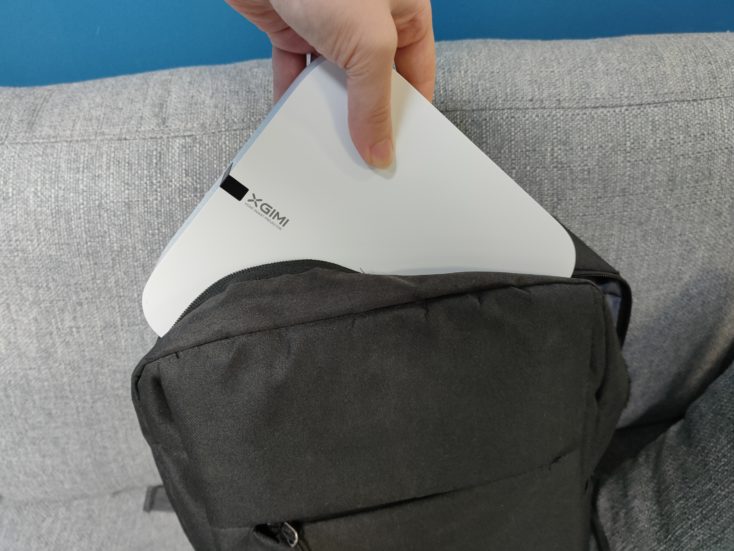 The light source is of course LEDs and no obsolete lamps installed. A brief summary of the advantages: more power efficient, less heat generation and longer life. XGIMI states 30,000 hours, which would be over 40 years with two hours of use every day. Even if the value is not quite correct and should actually be lower, you can assume that you will probably never have to replace the LEDs, but rather get a 4K or 8K projector in 10 years. Or what will be the common resolution in 10 years, who knows.

There is an “on” button on the back, but you only need it the first time you turn it on if the Bluetooth remote hasn’t been paired with the projector yet. Besides the printed data and labels, there is also a thread on the bottom to mount the projector on a tripod or upside down under the ceiling.

There are only the most necessary connections: One HDMI and one USB port, plus a headphone jack – that’s it. Thus, multiple devices cannot be connected via HDMI at the same time.

A few words about the operation (that’s all it needs). There are no buttons on the projector itself, instead you use the included Bluetooth remote control. This has to be paired with the device once, but then all the buttons are self-explanatory. If I can say one thing about the remote control: It looks damn fancy, I like the white with black buttons extremely well. There is also a microphone integrated and there is a button for Google Assistant voice control. Oh, and it needs two AAA batteries, which are not included. 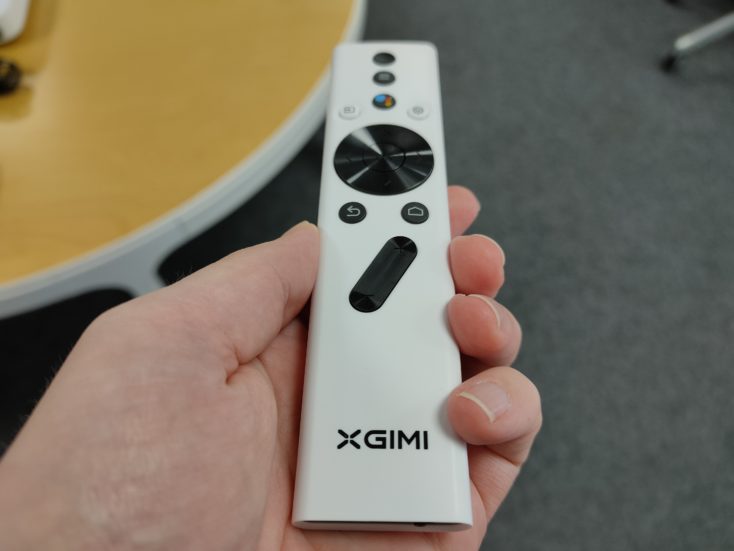 You have to set up the projector briefly at the first start, but that is done in a few minutes. Anyone who has already set up an Android device knows the procedure. Select the language, connect to the Wi-Fi network, and optionally transfer an existing Google account directly to the projector via smartphone. 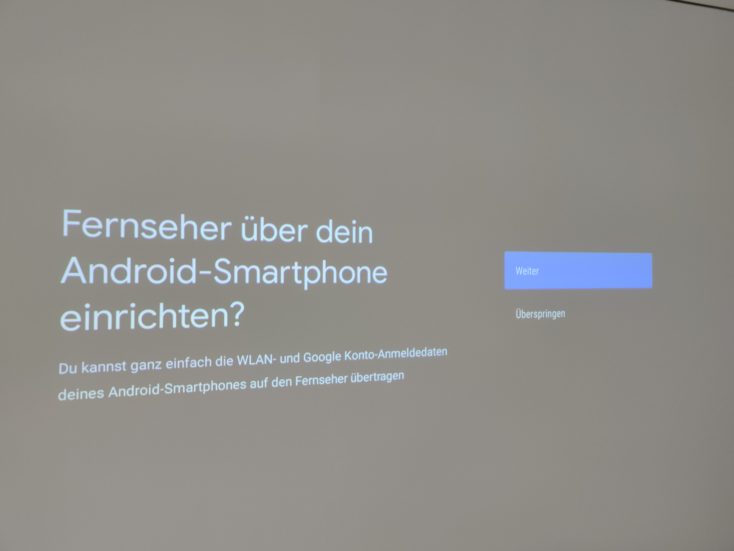 As mentioned, Android TV 10.0 is used as the operating system. There is no outdated Android 6 like in the Wanbo T2 Max or other experiments, but you can expect that for a €600 model. Chromecast and Google Assistant are also included. A variety of apps can be installed via the Playstore, Prime Video, Hulu and Disney+ are explicitly mentioned.

Other features include automatic keystone correction and auto-focus. Both are implemented by a sensor on the front that detects the distance and angle of the projector to the screen. Somewhat surprisingly, the projector also supports 3D. The technology has rather fallen out of fashion in the last few years and would absolutely no longer be a purchase criterion for me. However, anyone who values it will find what they are looking for here. 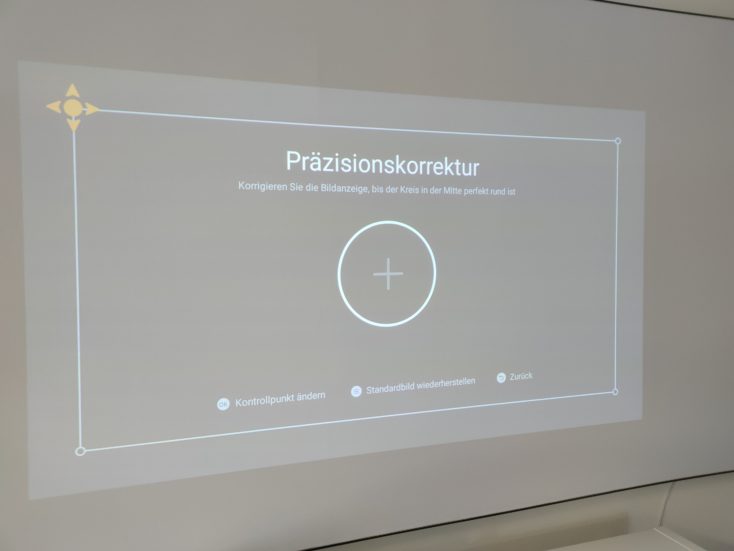 While the autofocus works well and the image is actually always sharp, the keystone correction is not convincing. Although the image really adjusts automatically every time the orientation is changed, it is rarely perfectly rectangular. I almost always had to readjust it manually. That is not tragic and only has to be done once after setup anyway, but it makes the function kind of superfluous – a pity.

To be able to watch Netflix on the projector, a small detour is needed. The “normal app” can be installed, but no content can be played. Apparently, the app is not yet fully supported by some Android TV devices. To use Netflix anyway, you have to download the app Desktop Manager from the Playstore. Then install Netflix via this app and you can use the app normally. XGIMI is said to be working on fixing this problem. Unfortunately, it is currently not possible without this workaround. 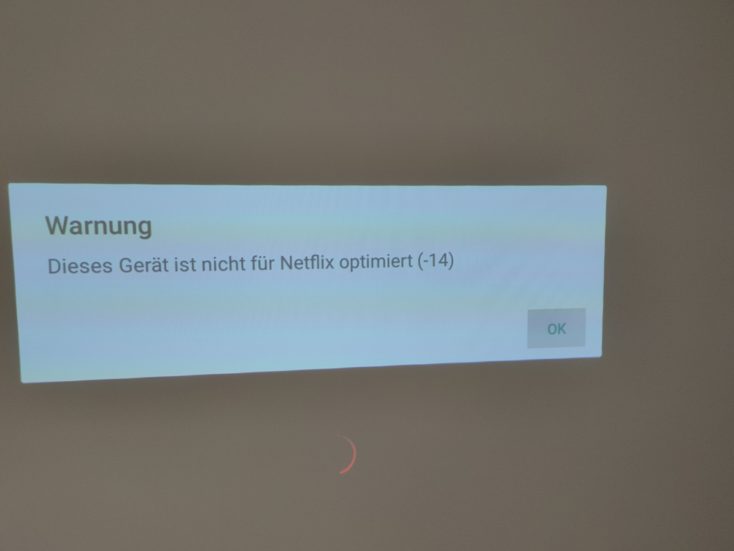 The brightness is often described as the most important factor in a beamer. 800 ANSI lumens, which are specified here, are a good value, and even in daylight the image is well visible. Only in direct sunlight does it really get too much. Nevertheless, it is best to enjoy the picture in the dark, but especially when the projection surface is not quite as large, it is just as well during the day.

The native resolution is Full HD, as 1920 x 1080p. That still looks different on a screen than on the TV and is, in my opinion, still perfectly adequate in 2021 (while I also say in the meantime that all new devices should support UHD). However, videos with higher resolutions up to 4K/UHD can be played back.

In the settings, a few color profiles can be selected or all values like contrast, brightness and color intensity can be set manually. The projector supports HDR10+ and MEMC.

Gaming is also possible on the beamer. We have Playstation 5 and Nintendo Switch connected to the Elfin and both look great. However, I noticed a noticeable input lag when gaming. You get used to it quickly and single-player games are playable without problems. However, this could be a disadvantage in fast online games, especially on a higher level. For me personally, this would not be an exclusion criterion, but hardcore gamers should consider it.

Two points about the beamer’s “sound”. On the one hand, the speakers are of course important, but on the other hand, the fan and the volume it produces is also a decisive criterion. XGIMI states “under 30dB” on its own website. That is a good value for a projector, many models are rather around 35, very loud ones over 40dB. For comparison, a normal conversation takes place at around 40dB. In fact, even during prolonged use, the fan is very quiet and rarely distracting. One of the biggest advantages of the Elfin in my opinion.

We were asked several times to check the volume using measuring devices. Unfortunately, there is a basic noise level of at least 30 dB in our office, which our measuring device indicates. I cannot reliably measure values below this in any of our rooms. When measuring at a distance of one meter from the beamer, I cannot detect any change in the value.

The speakers, as always with XGIMI, come from Harman/Kardon (who now also cooperate with Xiaomi and produce the speakers in the Mi 11T Pro, for example). Of course, there is not much room in the small Elfin, and the bass in particular does not really come into its own. Apart from that, the 3-watt speakers in the Beamer do a good job and sound pleasant even at higher volumes.

The XGIMI Elfin is a solid overall package. There are cheaper Full HD projectors, but with DLP technology, Android 10 and the other features, the Elfin offers much more than the usual 100-200€ Amazon models. The brightness of 800 ANSI lumens is also clearly above that of these budget models, and the very quiet fan is also a plus. In addition, there is the interesting shape, which is not a pro-argument per se, but can also be advantageous depending on the intended use. Extras like the auto focus and 3D support (!) round off the package. Deductions are only made for the insufficiently well-functioning Auto Keystone correction and the slight input lag during gaming. Netflix can also only be used via a small detour.

The price is around 600€, partly also 650€ on Amazon. The scope that the XGIMI Elfin offers is not found in cheaper beamers. Nevertheless, I would recommend it with some restrictions. As a permanently installed home theater projector, it is not ideal in my opinion, here alone lacks several HDMI ports, even if the image is sufficiently good. Also, those who do a lot of online gaming might be better advised elsewhere. The Mi Smart Projector 2 Pro costs about the same, but it is much brighter and has much better speakers, but it is four times as big and heavy.

However, those who do not install the projector permanently, but only occasionally; those who like to take it to friends’ houses; those who occasionally play games or do not play too many hectic games; all of these can, in my opinion, safely buy it.