0 Kommentare January 6, 2019by Jens
Hey, guys! Just a heads up: The linked offer is already a bit older and the price of the gadget might have changed or it might not be available anymore.

With the XGIMI H2 we would like to introduce a Full HD LED beamer. It plays in a league with the Mijia Projector from Xiaomi, which we have already tested, both in terms of price and data. Which of the two beamers is the better one? 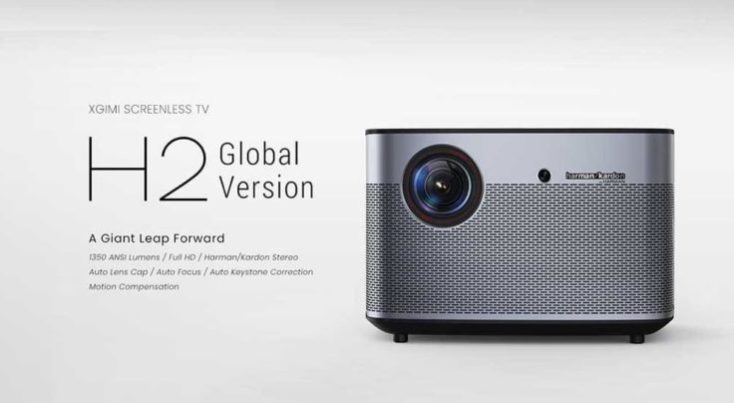 The floor plan of the beamer is approximately square with rounded corners. With sides of 21 cm and a height of 13.5 cm it does not take up too much space. On the upper side there are some buttons for operation as well as a touch bar for volume control. On the underside there is a thread exactly in the middle.

At the connections on the back side there are two USB connections (one USB 2.0 and one USB 3.0 each), two HDMI inputs as well as a LAN port and an S/PDIF connection. The headphone socket and the connector for the power supply are also located here, of course. The ventilation slots are located directly above the connectors. 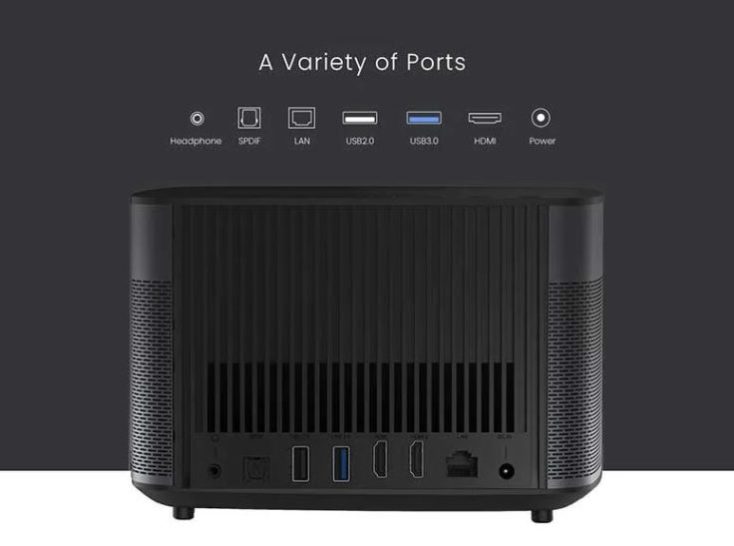 In front of the lens there is an automatic mechanical cover, which is pushed to the side when switched on. Next to it there is a sensor with which the beamer can independently adjust focus and keystone correction.

It is a DLP LED beamer whose luminaires are to have a service life of 30,000 hours. It’s questionable whether this is really the case, but with LEDs you don’t have to worry about having to change the lamps at some point. The brightness is given as 1350 ANSI lumens, which is more than the 800 lumens of the Mijia Projector. But already the Mijia Projector had a sufficiently bright image in darkened rooms.

The image resolution is Full HD (1920 x 1080p), but videos up to 4K can at least be played back. The throw ratio is 1.2:1, which means that at a distance of 1.2 meters to the screen, an image with a diagonal of one meter is produced. It is interesting that at least the manufacturer promises a projection of up to 300 inches. That would be a screen diagonal of 7.63 m(!). Of course, this is theoretically possible – if you put the beamer further away, the image also gets bigger and bigger. Nevertheless, this sounds very exaggerated, and a value below 150 inches should be much more realistic if you still want a reasonable picture.

Like the Xiaomi beamers, the XGIMI H2 has its own operating system, which is also based on Android 6.0. This is the real advantage compared to the Xiaomi models, because the operating system of the Global version supports different languages, is much clearer without dozens of Chinese program offers and Google apps can also be used. YouTube is already pre-installed, Apptoide can be used to download additional apps (Netflix, Amazon Video).

The speaker is very promising. Especially with cheaper beamers the sound is often a point of criticism, because the focus is understandably on the picture. It is often better to use external speakers. In this case, however, loudspeakers from the well-known manufacturer Harman/Kardon are used. Two 16W loudspeakers and an additional passive radiator should provide a full and atmospheric sound. So the beamer also has the possibility to use it only as a loudspeaker.

On paper, the XGIMI H2 reads better than the Mijia Projector. Brighter picture, the Harman/Kardon speakers and the multilingual operating system are clear plus points. But here we are a little more than $100 higher. For an LED beamer with Full-HD and DLP this is still a good price.

What do you think? Does the beamer sound basically interesting; do you think the XGIMI H2 could be a real alternative or even better than the Mijia beamer?