The Xiaomi 12 is supposed to be the new flagship of the now second-largest smartphone manufacturer worldwide. Like the Mix 4 and Xiaomi Pad 5, not only the “Mi” in the name is removed, but also a few features of the predecessor. Next to the Xiaomi 12 Pro, the normal Xiaomi 12 almost looks like a mini version of the actual flagship. What can we expect from the Xiaomi 12? 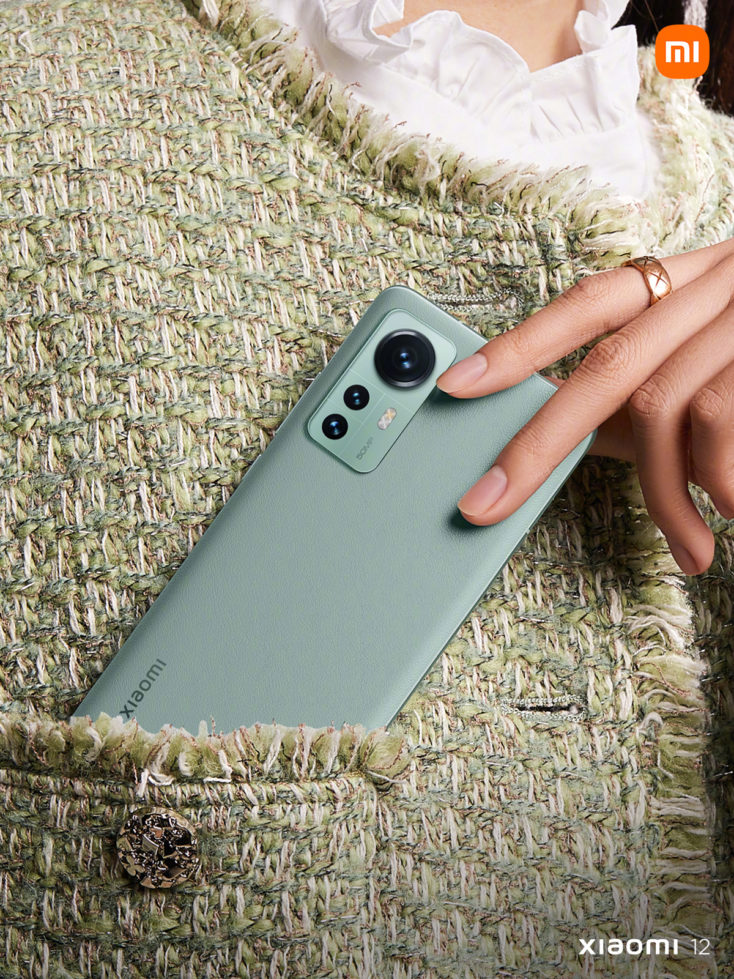 If you looked at the Xiaomi 12 and 12 Pro head-on, you can see the design language of the flagship series. In a way, it looks like a mix of the Xiaomi Mi 11 and the Xiaomi 11T Pro. However, the front differs from the predecessor in one particular aspect: The front-facing camera is in the center and no longer on the upper left. That was actually the unique selling point of Xiaomi’s top models. 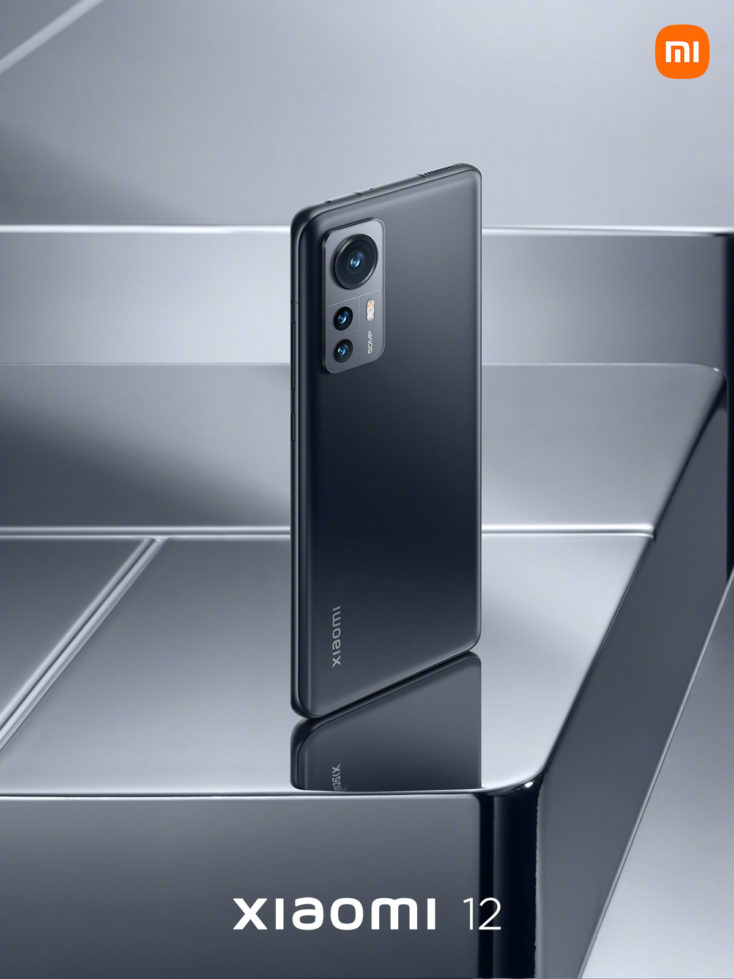 However, the biggest feature of the Xiaomi 12 is its size! Even before you compare the Xiaomi 12 with the iPhone 13. Thus, the new Xiaomi flagship offers a screen diagonal of 6.28″, although the phone is slightly thinner than the iPhone 13 with 69.9 mm in width. This difference of 1.6 mm should be noticeable according to Xiaomi! Nevertheless, the iPhone 13 is still slightly smaller than the Mi 12 with a diagonal of 6.1″. The weight of 180g is another 16g lighter than the Xiaomi Mi 11. The display is curved, the corners as well, but there is no longer a display, only a black border. 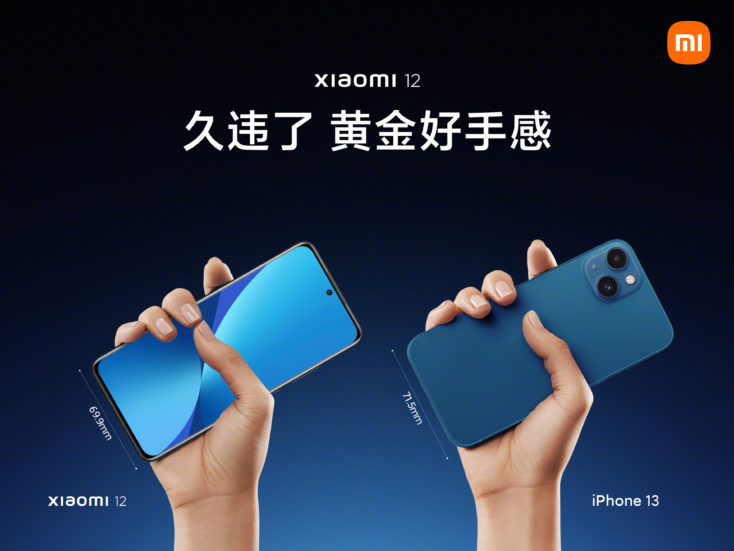 The rear side follows the motto “understatement” because hardly anything can be found there except for the camera module and the Xiaomi logo. The camera module houses three cameras. The main sensor is considerably larger, takes up the most space at the top and is slightly offset from the other two sensors. The individual sensors are even visually separated with fine lines and remind us of the OnePlus 9 Pro. The Xiaomi 12 is available in four colors: black, pink, blue and green. At least the green colorway is equipped with a synthetic leather back, while the other backs are made of matte glass. 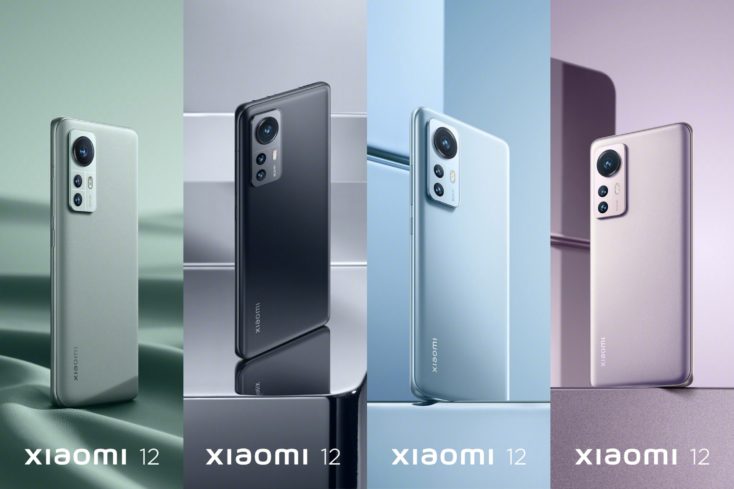 How sharp is the display of the Xiaomi 12?

Thanks to the 6.28″ diagonal, the Xiaomi 12 is relatively compact. It is a 120 Hz AMOLED screen with FullHD+ resolution and a refresh rate of 120 Hz. Thus, the resolution is probably lower than that of the predecessor! That is logical for a smaller display, especially since the higher resolution also requires more energy. In addition, we get a pixel density of 419 ppi. The screen supports HDR10+ and Dolby Vision as well as 12-bit color depth. The brightness of up to 1,100 nits is particularly bright, although it can probably only reach this value with automatic brightness and HDR content. Like the predecessor, it is protected by Gorilla Glass Victus. 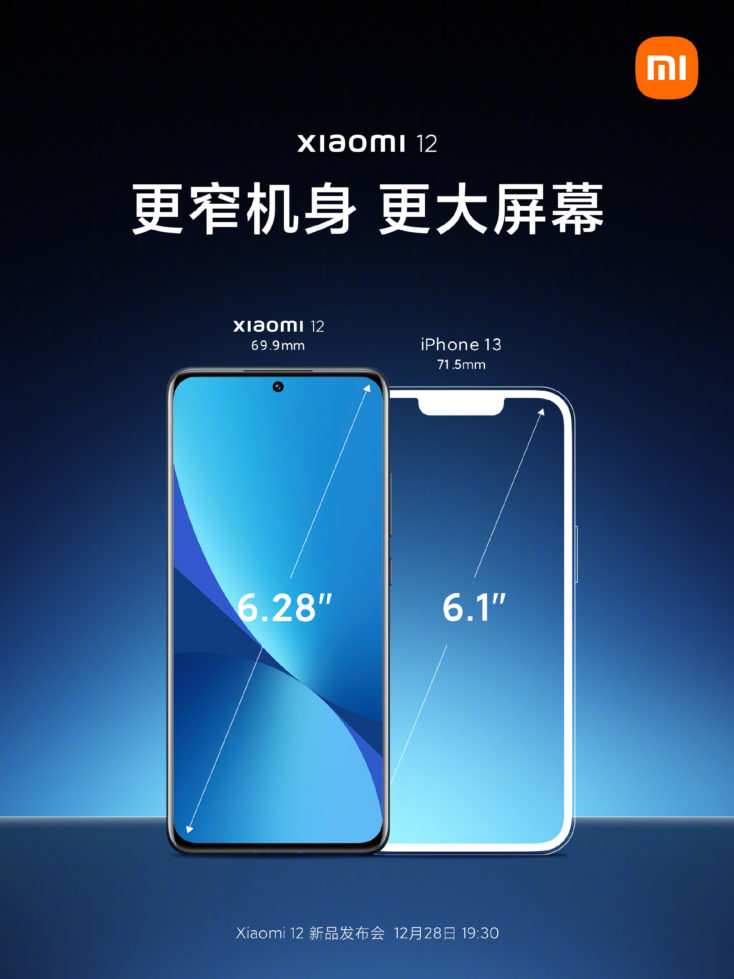 Due to the AMOLED panel, it is also possible to integrate the fingerprint sensor under the display again. This is probably an optical sensor again. AMOLED also offers the energy-saving advantage and can also enable an always-on display. As usual, MIUI offers a wide range of settings.

Which processor is in the Xiaomi 12?

Why Xiaomi is in such a hurry to present the latest flagship is relatively clear. One reason is that it is the first manufacturer with the new processor for the coming year. As in the past generations, they chose Qualcomm’s top processor, the Qualcomm Snapdragon 8 Gen 1 in 2022, which is now manufactured in a 4nm process with a Cortex X2 high-performance core. 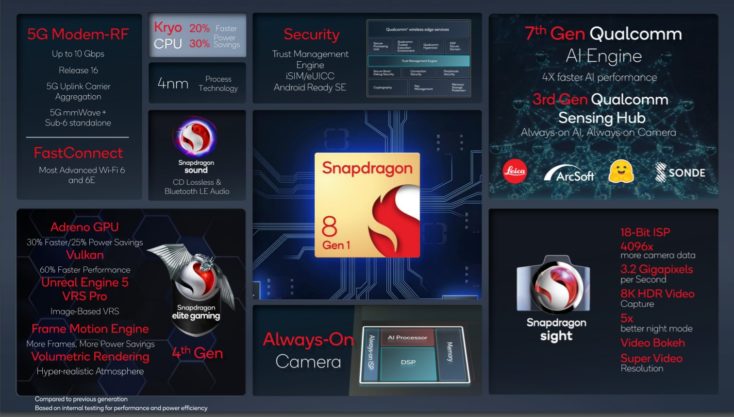 The new processor offers a clock rate of up to 3 GHz and consists of Qualcomm’s Kryo CPU cores. The performance is not increased that much, the focus is on efficiency in this generation. Allegedly, it offers the best performance per watt. Especially the Adreno 730 graphics unit offers 30% faster graphics rendering and is 25% more efficient! The chip also gets a better image processor and better AI capabilities, which are said to be up to 400% stronger. On top of that, there are new connectivity standards like the new Snapdragon X65 5G modem and WiFi 6 and 6E. Since there were heat problems with the Snapdragon 888, Xiaomi emphasizes improved cooling here.

No details are known about the memory yet, but we can expect at least 8 GB of LPDDR5 RAM and 128 GB of UFS 3.1 mass storage.

The regular Xiaomi 12 is equipped with a 50 MP sensor with 4-in-1 pixel binning. This is the Sony IMX766 sensor with 1/1.56″ size, which we also know from the OnePlus NORD 2 or OPPO Find X3 Pro. The lens consists of eight lenses, the aperture of ƒ/1.9 is not quite as fast as the competition, but the sensor is optically stabilized. In addition, there is probably a 13 megapixel ultra-wide-angle camera with a 123° shooting angle with a ƒ/2.4 aperture. The third camera is unfortunately a macro camera, where the resolution is concealed. The closest focusing distance is normal at 3 cm. 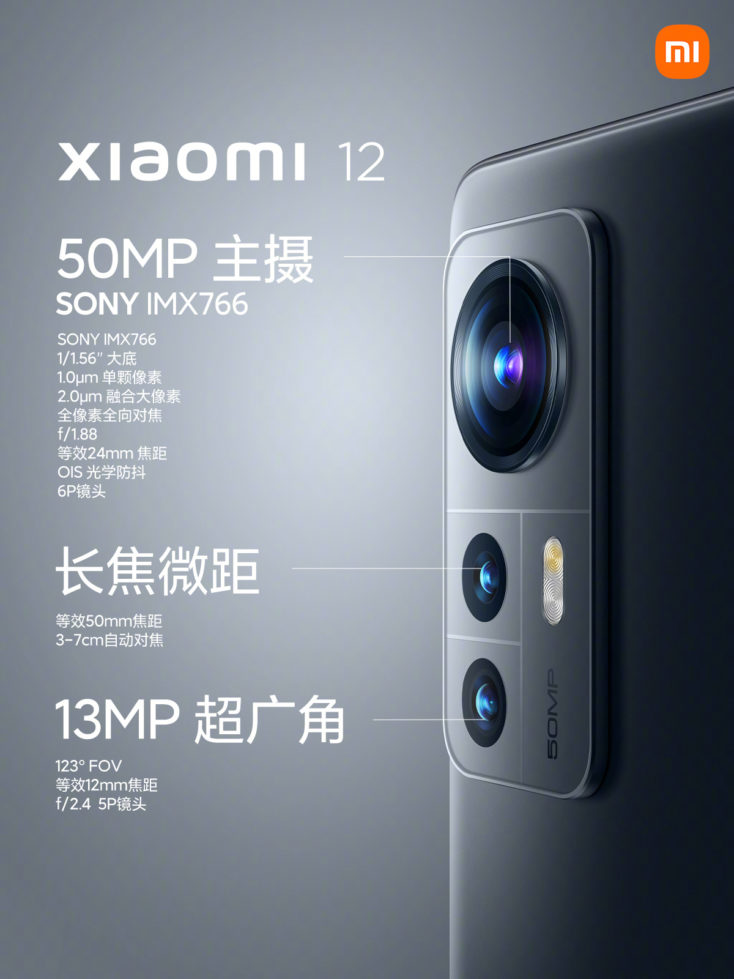 Xiaomi has also improved the shutter speed. Thus, the Mi 12 is able to take 50 photos in the same time that the Huawei P50 Pro can take just 17 photos. Another new feature is CyberFocus, an improved autofocus with FollowFocus, so that the selected object is always in focus, even when other objects or people come into the frame. 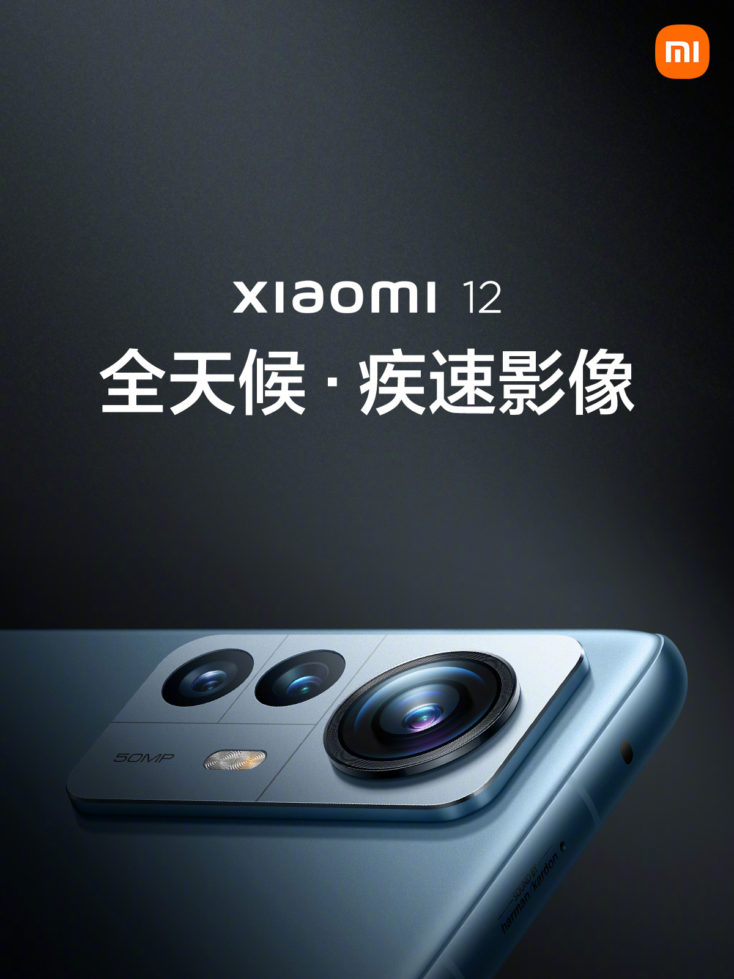 A new selfie camera has now been chosen. The sensor has a resolution of 32 megapixels, which is a decent upgrade compared with the previous front cameras in Xiaomi flagships. Thereby, you have an improved “front light”, in which a part of the viewfinder is already turned white to illuminate selfies well even in low-light conditions.

As expected, the Xiaomi 12 is also equipped with corresponding 5G modem, but good old LTE is also still on board. However, the Xiaomi 12 version in China that has been presented so far will probably lack LTE band 20, which is why an import is only suitable to a limited extent. However, WiFi 6 for home use as well as the current Bluetooth and GPS standards are included. A USB-C port is found on the bottom, but there is no jack. As is typical for Xiaomi, you will not have to do without an IR blaster on the top. 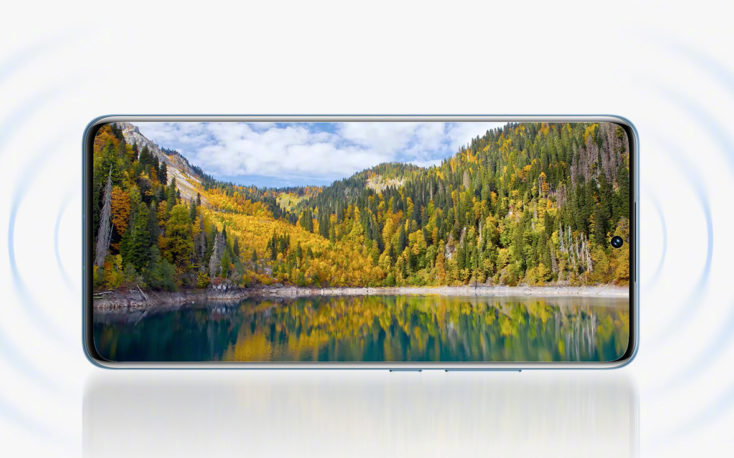 The runtime of the predecessor was suboptimal, but that was mainly due to the Snapdragon 888. To counteract this, the efficiency of the new top processor is probably relied on. The normal Xiaomi 12 also gets a smaller battery because of the smaller display. With a capacity of 4,500 mAh, it is even smaller than in the predecessor, but the display is smaller and not as high-resolution, which is why the runtime should be good as typical for Xiaomi. In addition, the Xiaomi 12 charges with 67 W via cable, whereas the wireless charging power is 50 W – just like the predecessor. 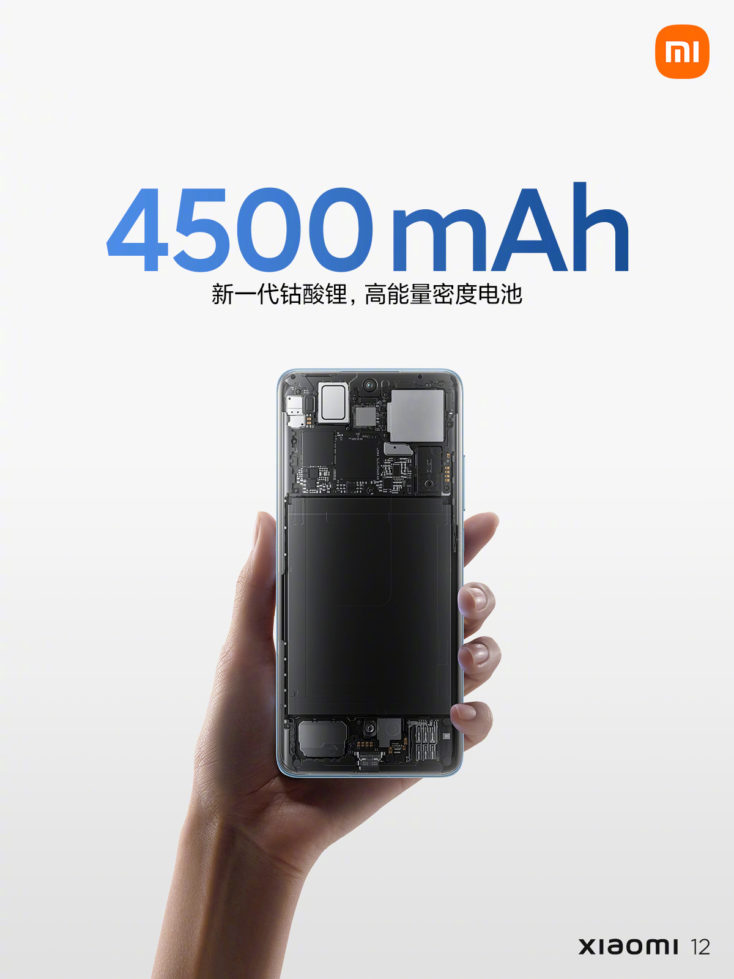 The manufacturer has also already launched a smartphone with 120W charging in Europe with the Xiaomi 11T Pro. We also get that in the Pro version in this flagship generation; the Xiaomi 12 Pro can be charged with 120W via cable. But wireless charging is also possible again.

Xiaomi also announced the new MIUI 13 operating system during the presentation of the Xiaomi 12. Beforehand, it was necessary to point out how well the in-house operating system performed in the Master Lu benchmark and only had a speed loss of less than 5% even with continuous use of one and a half years. Above all, security and privacy are also important. Thus, there is now a kind of “anti-fraud protection”, which is shown by corresponding logos throughout the system, for example, and takes effect. Face recognition has also been revised so that parts of the upper body are also included in the biometrics. 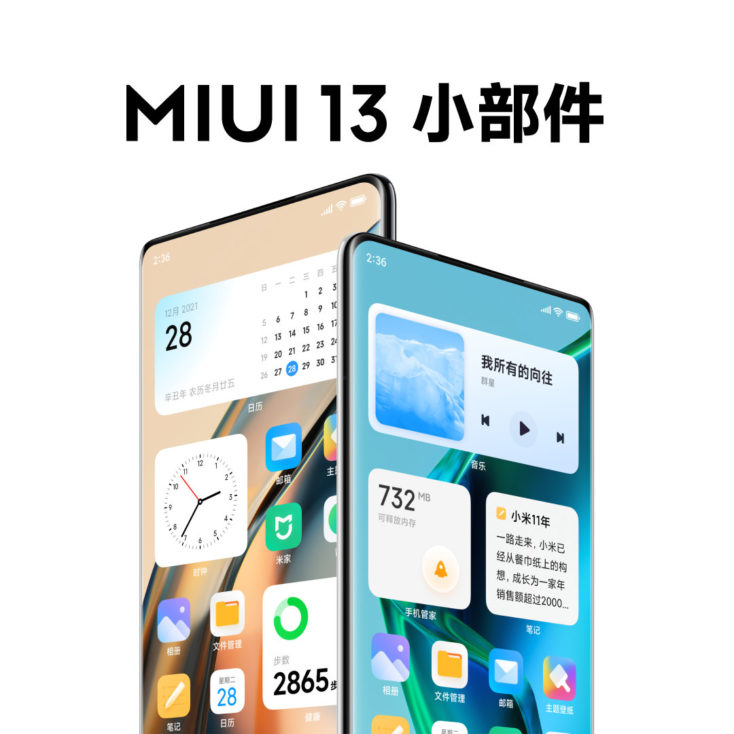 Xiaomi also announced that it will continue to pursue the ecosystem approach and that MIUI will be installed on all devices. Besides the smartphone, MIUI will also run on tablets, watches, smart home gadgets or the TV. Everything is connected, so that you can simply drag a running song from the Home app to the TV and play it there. The widgets have also been redesigned, and some of them can even be personalized.

Which versions will be available?

As is often the case, the Xiaomi 12 is not alone. Allegedly, there will even be four different Xiaomi 12 models, last year it was the Xiaomi Mi 11, Mi 11 Pro and Mi 11 Ultra. A successor is expected from these devices, and there is even a Xiaomi 12X! This is more or less the Xiaomi 12, only with a Snapdragon 870 processor and without wireless charging. The Mi 5X was the model for the Xiaomi Mi A1, for example.

The Xiaomi 12 Ultra, which puts special emphasis on cameras, is likely to attract a lot of attention again. Allegedly, Xiaomi enters a partnership with Leica, which ended its cooperation with Huawei. There is also a cooperation with Sharp, but perhaps they did not enter into an exclusive contract and help Xiaomi with the main camera of the 12 Ultra. This is probably combined with three telephoto cameras with different zoom levels with up to 10x zoom at a resolution of 48 megapixels.

So far, only the Xiaomi 12, the Xiaomi 12 Pro and the Xiaomi 12X have been unveiled, the 12 Ultra has not (yet) been announced. However, it would not be unusual if this model is presented in a separate launch event. We will keep you up to date in this regard!

When will the Xiaomi 12 be released and how much will it cost?

The Xiaomi 12 and Xiaomi 12 Pro have only been introduced in China yet. Due to the English operating system and the lack of LTE Band 20, an import is not necessarily worthwhile. A release for the German or European market has not been announced yet.

It is hard to consider the Xiaomi 12 as the successor of the Xiaomi 11, the approach is different. The shrunken size alone is a good, but surprising step from our point of view. This actually places it somewhere between the Mi 8 and Mi 9. You also have a lower resolution than in the predecessor, slightly less battery, and strictly speaking, a lower-resolution camera. However, that is precisely an advantage, the Sony IMX766 gives more hope than the 108 MP Samsung sensor.

Due to the size, however, a few other factors arise. The smaller display should consume less power, and the battery is also relatively large in relation to the size. The Xiaomi 12 is certainly a good all-rounder, but probably not a high-end smartphone. That is left to the Xiaomi 12 Pro and thus returns a bit to the roots of a Mi 9. At least there is now a reasonably compact smartphone again that we can probably recommend.

What do you think of the Xiaomi 12?