0 Kommentare October 9, 2019by Jens
Hey, guys! Just a heads up: The linked offer is already a bit older and the price of the gadget might have changed or it might not be available anymore.

In the course of the event, where the Mi 9 Pro and the Mi MIX Alpha were presented, CEO Lei Jun also briefly showed a new Powerbank with 50 Watt. It is the second Powerbank in a short time, only recently a new wireless model was announced. Meanwhile most data are known and the Powerbank can be bought online. 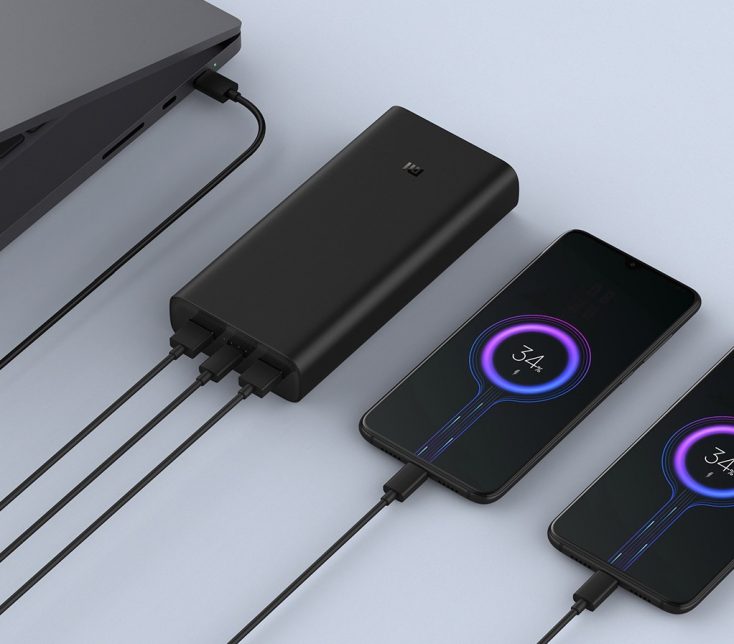 The Powerbank with 50 Watt is the most powerful model of Xiaomi so far. As was again emphasized in the presentation, not only smartphones but also notebooks can be charged with it. This is especially practical when you have to work on your laptop or want to watch movies on the go.

But the 50 watts are also needed to keep up with current developments in smartphones. The Mi 9 Pro can be charged with up to 40W, which conventional Powerbanks simply can’t do anymore. But this is the only way to achieve the extremely short charging times. The Mi 9 Pro charges from zero to 100% in 48 minutes.

Maximum performance can only be achieved from the USB-C output. The two USB A outputs deliver up to 27 or 15 watts. However, it is also possible to use several ports at the same time, which makes sense especially if the end devices to be charged don’t take full advantage of the performance anyway. So far, this has only been possible with the latest models such as the Mi 9 Pro mentioned above.

The capacity is 20,000 mAh, which is the current upper limit for Powerbanks. Why one would not bring simply a model with 100,000 mAh on the market, Lei Jun answered with a simple reason: 20,000 mAh are the approximate limit value, up to which most airlines allow to transport Powerbanks in airplanes. So a larger Powerbank loses the advantage that you can take it with you on long journeys.

The estimated price for China, at which the Powerbank can now also be found on xiaomiyoupin, is 299 RMB. The converted price is $41, which is an attractive price, as you might anticipate. However, as expected, the import price is rather $50 and up.

Is the Powerbank interesting for you or do you say: Less watts are enough for me because my smartphone can also be charged with less powerful Powerbanks?