3 Kommentare September 21, 2019by Jens
Hey, guys! Just a heads up: The linked offer is already a bit older and the price of the gadget might have changed or it might not be available anymore.

Xiaomi has announced that it will soon launch the first 8K TV. The official launch is scheduled for September 24. Then also the 5G versions of the MI 9 and Mi MIX as well as the new operating system MIUI 11 will be presented. 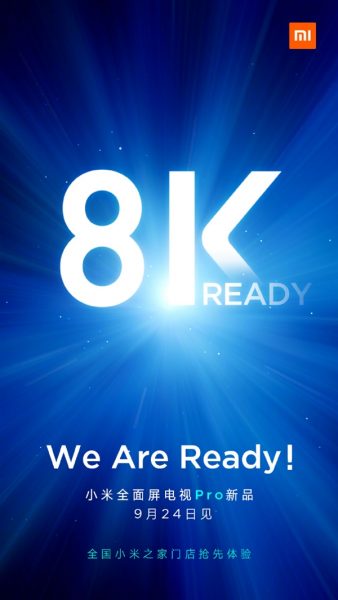 Xiaomi already has a strong presence in the television market in China and India and sells a few dozen different models. From “small” 32 inch and Full HD up to 70 inch 4K televisions everything is included. Most devices are so-called Smart TVs, on which also Xiaomis operating system MIUI TV runs. An 8K Smart TV would probably be the best model so far.

For Europe and the far west the devices are so far little interesting: The transport is expensive and complaints are still clearly more complicated and more expensive than with smaller devices. Some Xiaomi televisions can be ordered via platforms such as AliExpress. However, the cost advantage of the cheap devices in China is no longer so great here.

But Xiaomi is already expanding into Europe. In countries like Spain, France and also Austria one is already represented with stores and seems to be currently also on the leap to Germany. It is quite possible that we will soon be able to find televisions in European stores as well. Then it will depend strongly on to what extent Xiaomi can keep prices low in order to be able to offer itself as a real option when buying television.

Apart from the resolution, not much is known about the now announced model. There will probably be a 55 inch version and a 65 inch version. You can probably assume a comparatively low price (if you can even talk about “cheap” with 8K televisions). Just as with the previous models, only China and India will be the target market, an import into other countries will hardly be worth it.

Samsung and LG already have 8K televisions on the market, but the price here is between 5,000 and 30,000 US dollars. Overall, 8K is still an absolute niche technology, as it is extremely expensive on the one hand, but there is hardly any content included in 8K on the other. Not even 4K is standard until today.

It is quite possible that Xiaomi, as a newcomer in the international TV market, simply wants to attract as much attention as possible with the announcement. It remains to be seen whether the television itself has what it takes to become a bestseller in China.

A review of a Xiaomi TV?

We have often been asked if we would like to order and test a TV from Xiaomi. For various reasons we have refrained from doing so so far. Especially at the beginning, most televisions only had a Chinese operating system. That was already a problem with the Xiaomi projectors we tested. In addition there is the not always given availability, because apart from the platform AliExpress you can hardly get the TVs. Hardly any online shop includes the devices in its assortment so far.

Should Xiaomi now want to sell more products in Europe / the West, this could of course change. Beamer and television sets can already be partially converted to English – a good sign. What is your opinion about Xiaomi TVs? Does the company have a chance on the market against established brands (whose devices are no longer so expensive)? And do you personally have an interest in a Chinese television, or does it pass you by completely? Tell us your opinion in the comments, we are looking forward to an exciting discussion.