0 Kommentare May 12, 2019by Tim
Hey, guys! Just a heads up: The linked offer is already a bit older and the price of the gadget might have changed or it might not be available anymore.

With the Xiaomi AirDots, the Chinese manufacturer took quite a bit of time. Only two years after the release of the Apple AirPods does Xiaomi counter with its own door wireless in-ear. The adoption of the Notch design for smartphones, on the other hand, only took a few months. Whether the headphones, which we had to wait so long for, can now at least convince, you can find out in the review! 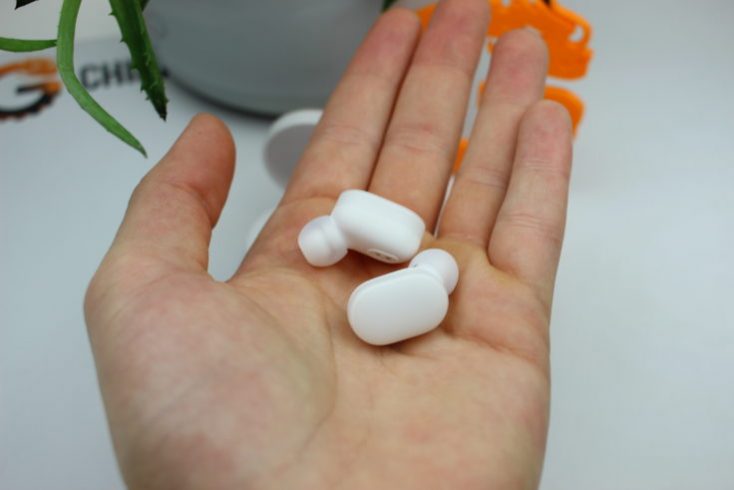 The AirDots arrive in a white, plain cardboard box. On the front the AirDots and the charger are shown. On the back you can find all technical data of the headphones, unfortunately everything is in Chinese, as well as the manual – for the time being the AirDots don’t seem to be intended for the global market. 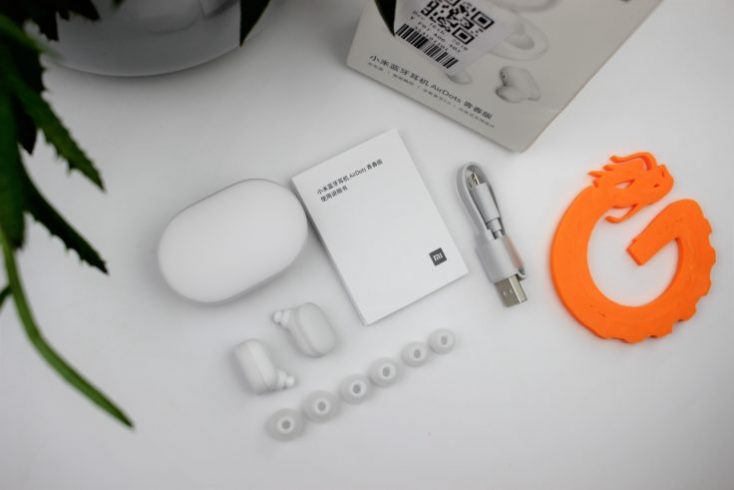 The scope of delivery of the Xiaomi AirDots is straightforward. In addition to the Chinese user manual, ear pads in three different sizes, a very short Micro-USB charging cable and of course the headphones with charging cradle are included. Xiaomi was also more generous here, at least with the ear tips there are a few more than with the TicPods Free.

The design of the Xiaomi AirDots Youth Edition was probably developed together with that of the Xiaomi Mini Bluetooth Headset. Both headphones have the exact same housing size of 23 x 14.5 x 13 mm and a weight of 4.5 g per handset. 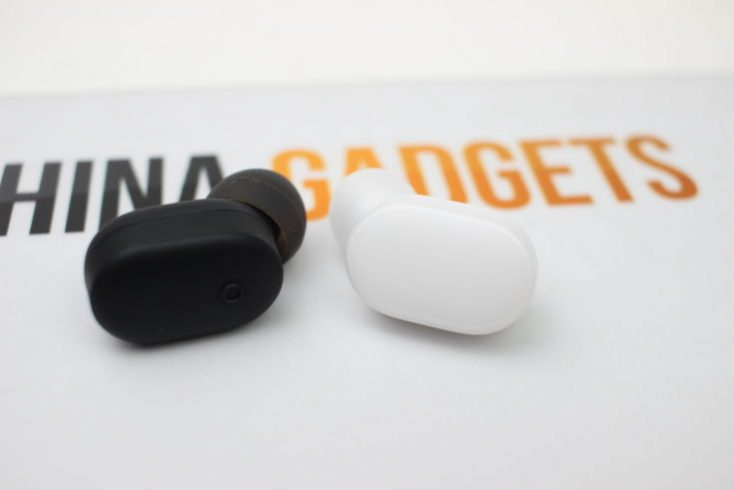 The charger cradle of the AirDots measures 62 x 41.5 x 26 mm and weighs 29.6 g. Together, the receiver and charger cradle weigh 38.6 g – quite light if you compare AirDots with the Anker Soundcore Liberty Air. 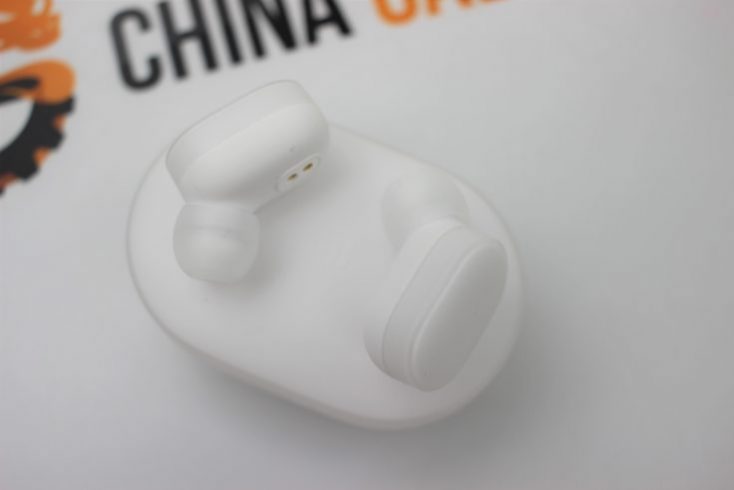 Although the Xiaomi Mini Bluetooth Headset is available in black and white, the Xiaomi AirDots Youth Edition (unfortunately?) is only available in white. All in all, the headphones couldn’t have been designed simpler. The shape and the used material of the charging cradle corresponds to that of a Xiaomi AirDot itself, even the surface of the lid is based on the touch panel.

Anyone looking for a large, eye-catching Mi logo will only find it at second glance. It is very small and discreet on the lid, but depending on the angle you look at the cradle, it is almost invisible. The headphones even manage without branding. Although the name “AirDots” is obviously based on Apple’s AirPods, the bud design as a whole is very far away from Apple. 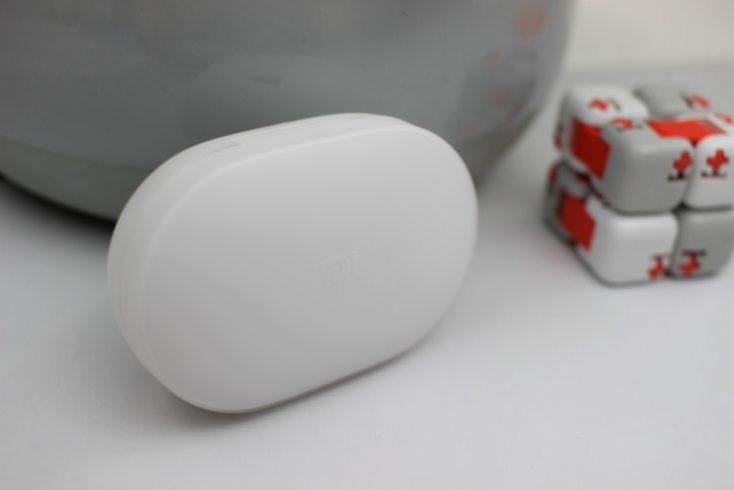 As usual from Xiaomi, there is nothing to complain about in the quality of the workmanship and material. The AirDots consist completely of a light but high-quality plastic, which gives both a chic and a sporty impression.

Inside the Xiaomi AirDots Youth Edition, a dynamic driver with a diameter of 7.2 mm beats comparatively large. Space for a BA driver, as in the Xiaomi Piston Pro series, the manufacturer apparently no longer found – a pity.

The headphones have a f, compared to the Xiaomi Mini Bluetooth Headset, fortunately other hardware is built inside. For a dynamic single driver, the AirDots are stronger than I expected in the tweeter and midrange range. 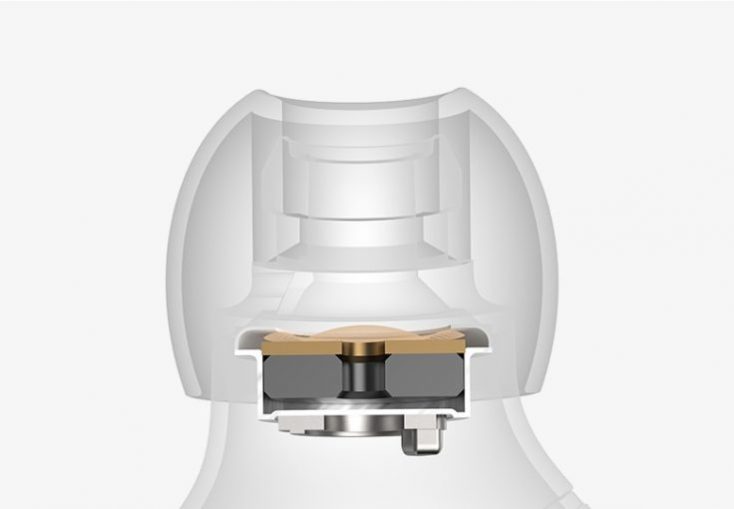 Especially in the high-frequency range, many inexpensive headphones are not as good as the AirDots, they move in this frequency range at about the same level as the Anker Soundcore Liberty Air. The midrange, on the other hand, is somewhat muffled, but nevertheless blends in well with the overall sound.

In the bass range the Xiaomi AirDots Youth Edition are surprisingly relatively reserved. Although it has a good bass that blends in well with the sound, it is much less dominant. Compared to the Anker Soundcore Liberty Air, the differences are relatively small.

In the test I liked the sound of the Xiaomi AirDots Youth Edition. Of course, Xiaomi has already introduced better-sounding in-ear headphones to the market in the area of wired headphones with the Piston Pro and the Piston Pro 2 Hybrid In-Ears, but there is also more room for corresponding loudspeakers.

In a direct comparison to the Piston Pro 2, you can clearly hear that the Hybrid In-Ear resolves even more precisely in the high frequencies and that some details are audible that the dynamic driver of the AirDots simply can’t realize. Surprisingly, the sub-bass of the Piston Pro 2 is also stronger than that of the AirDots. But since these headphones aren’t wireless either, they are only comparable to the AirDots to a limited extent.

With the rather low weight of 4.5 g per listener, the Xiaomi AirDots Youth Edition are a good earpiece for me, which the AirPods can’t claim to be ? . In the test I got along best with the middle ear pads. During the sport, on the treadmill, the wireless in-ear stays where I placed it – I rarely have to readjust it. 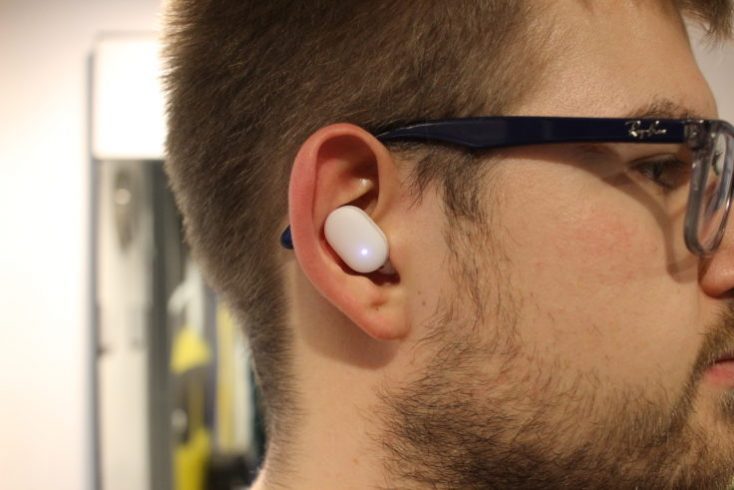 The insertion of the AirDots is somewhat annoying, as the touch panels extend over the entire rear side. This way you can pass any command to the headphones that you don’t want to execute. With a little fingertip sensitivity the insertion or readjustment works even without touching the touch panel.

Furthermore, I noticed a small blemish. Due to the slight overpressure in the receiver that occurs during insertion, the membrane is pressed against the loudspeaker. This is expressed by a crackling in the receiver. However, the pressure can easily be normalized by slightly wiggling the receiver and the membrane oscillates normally again. I would be interested to know whether our Xiaomi AirDots Youth Edition is an isolated case, do you also have this “problem”?

Functions of the Touchpad

As already mentioned, a touch panel is integrated on the back of each handset, so that only a light touch is necessary for operation. Unfortunately, neither the volume nor the title can be changed via the handset. Almost every other wireless in-ear can do more – a little dissapointing. At least the commands work under both Android and iOS.

Like the Anker Soundcore Liberty Air, the Xiaomi AirDots Youth Edition are also equipped with Bluetooth 5. If you take the handsets out of the charging box, they switch on automatically and pair each other first. As soon as the process is completed, this is signaled by a tone.

Xiaomi indicates the Bluetooth range with 10 meters, in practice I could confirm this value in the free approximately. However, if massive obstacles are added, the range decreases. In closed rooms you get about 5-6 meters, after that there are more and more missed connections.

If both handsets are connected, the Xiaomi AirDots Youth Edition can be used as a stereo headset. During the test calls, the audio quality was fortunately better than with the Xiaomi Mini Bluetooth Headsets. My conversation partners said that my voice sometimes sounds tinny, but is basically understandable.

Thus, the wireless in-ear headset is also suitable as a headset. For longer conversations, especially for those taking place outdoors, I wouldn’t use the AirDots.

Xiaomi doesn’t shine more with the battery life than other manufacturers. Each handset contains a 40 mAh battery and the charging cradle contains an additional 300 mAh battery.

In the test I could hear about 3.5 hours of music at a music volume of 50%-70%. Not a little, but with the Anker Soundcore Liberty Air, for example, I was able to achieve a runtime of about 4.5 hours. The recharging process in the charging cradle took about 40 minutes. Altogether three complete charges of the headphones are possible with the battery box. 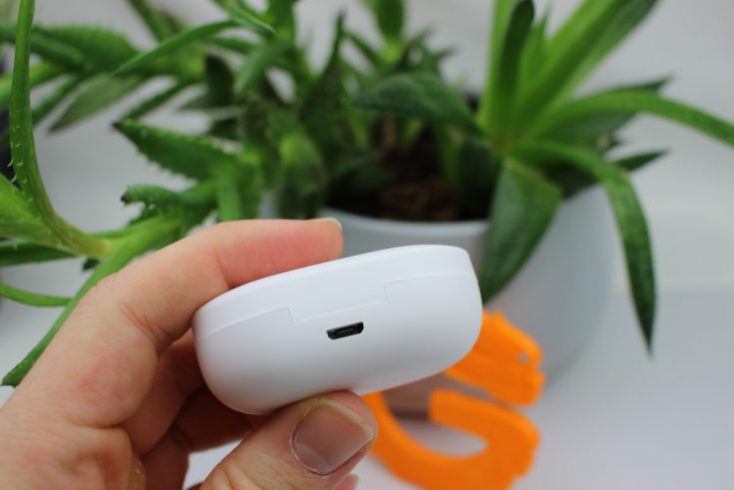 Although Xiaomi now almost completely uses USB-C for its own smartphones, the AirDots again have a Micro-USB charging port. A pity here I would have wished for the current USB standard.

I liked the Xiaomi AirDots Youth Edition altogether in the test. The headphones are, as usual from Xiaomi, well made and I also like the design very much! As expected, the wireless in-ears can’t quite keep up with the wired hybrid in-ears like the Piston Pro 2. But overall the sound has a nice balance and it’s fun to listen to music.

However, I would have liked to have had several control options with the built-in touch panel. Only two gestures are a bit less in comparison. At least the possibility to select the next title would have made me happier. Micro-USB isn’t the real thing either, but you can overlook that.

The price of the Xiaomi AirDots Youth Edition is significantly lower than that of Anker, Mobvoi or Crazybaby. They offer a similarly good sound, which in my opinion is their biggest advantage over other true wireless in-ears. So the demand is quite high at the moment. Therefore you have to be patient, depending on the shop, but in the end you get a solid wireless in-ear for your money!