7 Kommentare June 23, 2019 by Maike
Hey, guys! Just a heads up: The linked offer is already a bit older and the price of the gadget might have changed or it might not be available anymore. 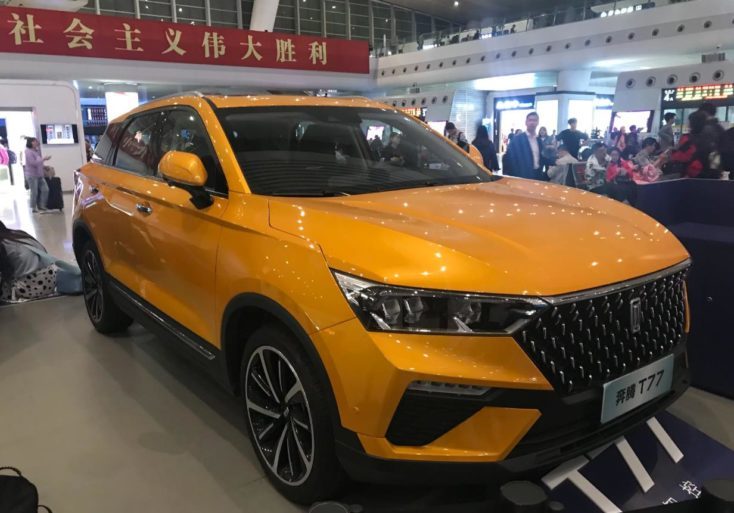 Xiaomi already cooperates with a large number of companies, including Western companies such as IKEA, Philips and Segway. German companies such as Wiha and Kärcher have also collaborated with the Chinese tech giant. Now Xiaomi has teamed up with Bestune (formerly Besturn) to launch an SUV on the market. The cooperation was announced via a Weibo-Post (Twitter China).

The car is currently being sold on the Internet under the name “Redmi SUV“, but there are many indications that “Bestune” will also be found in the name. The product name is according to own sources and photos probably “T77 SUV”. Xiaomi will list the car under the Redmi brand, from where probably the designation “Redmi SUV” comes.

Bestune belongs to the Chinese FAW Group, one of the four major automobile manufacturers in China. Apparently the SUV is equipped with the Xiao AI. The responsible persons say that they want to develop a system together with the FAW Group that offers “a great deal of privacy between user and car”. In the coming weeks you will be able to see exactly what this means.

Would you drive a Xiaomi car?

Lei Jun, managing director of Xiaomi, denies rumors about a possible Xiaomi car so far. However, he has also denied the general entry into the automotive industry so far. The very large development team around Xiaomi’s AI, which consists of 1,000 people, is currently working on using and offering the intelligent assistant outside China. It is conceivable that Xiaomi’s car will still come, but not likely in the near future. The cooperation with Faw Car is a first big step in the right direction.

Lei Jun, Managing Director of Xiaomi, still denied rumors about a possible Xiaomi car at the end of 2018, but he has also denied the general entry into the automotive industry so far.

Now, of course, the question arises: What can the Xiaomi car do? A lot of noise about nothing or also an exciting new release for this country? Let’s take a look at the technical data known so far.

The known specs around the Xiaomi car briefly listed:

As a special feature, the manufacturer offers the vehicle with a holographic assistant. This assistant offers three characters, one of which is shown in a prism on the dashboard. The characters are addressed by voice control and are intended to support the driver in essential functions of the vehicle. Initially, 43 functions will be available, including switching on the windscreen wiper or changing the volume of the radio.

A real exciting innovation that can prove to be very practical thanks to voice control. Whether you like the manga characters that much is another story. In this video you get a first overview of the Bestune T77.

Outlook: Is the Xiaomi car also coming to the West?

The Bestune T77, alias Redmi SUV, will be released in four different versions and will go on sale in the near future. The cheapest version will cost about $12,900, the most expensive $19,000. Due to the great dominance of German and American car manufacturers, we don’t expect the Xiaomi car to be available here as well. Especially because the Chinese market is the main target due to the strong competition in the West.

We at China-Gadgets are not the true car experts, we leave one evaluation of the SUV to others. Among you there are surely some who have more car questions on the pan. What do you expect from the Redmi SUV?