Tested: New Xiaomi Half In-Ear headphones with ceramic driver for $15.99

2 Kommentare June 1, 2018 by Maike
Hey, guys! Just a heads up: The linked offer is already a bit older and the price of the gadget might have changed or it might not be available anymore.

The new Xiaomi Half In-Ear headphone with hybrid drivers was only introduced in China on 23.03 and only three weeks later we hold it in our hands! Of course we took the opportunity to test Xiaomi’s latest headphones with jack connection immediately. How does it compare to Apple’s EarPods? You can find out here! 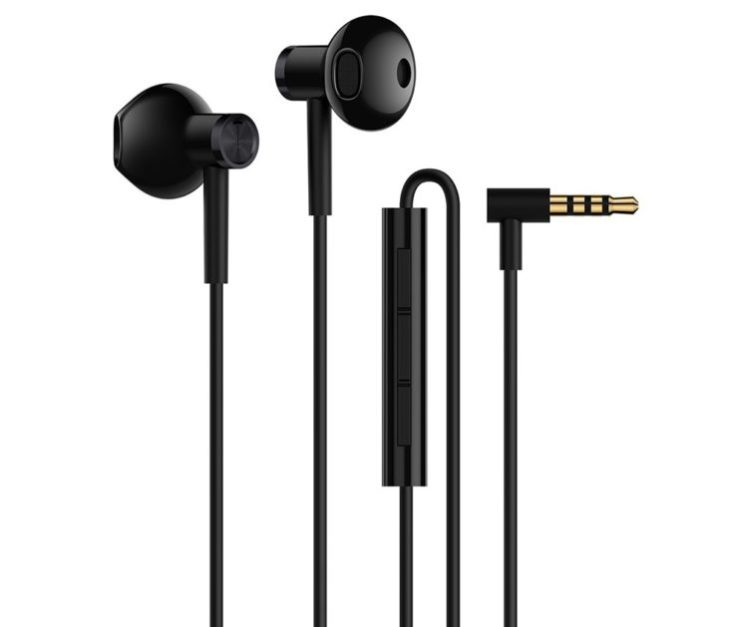 The Xiaomi Half In-Ears, have arrived in a simple plastic package. In contrast to the packaging of the Piston series, this looks a little cheaper.

Most people should already be able to imagine the spirit from which at least the basic idea of design originated. The Xiaomi Half In-Ears are reminiscent of Apple’s EarPods, which are included with every iPhone, iPod Touch and iPod Nano and are also available separately. Unlike Apple’s EarPods, Xiaomi’s half in-ear headphones are available in both white and black, and there are other small differences in design.

In addition, Xiaomi has provided the half in-ears with a, in our case, silver cover on the back of the handset. At this point, the headphones are also labeled “L”, “R”, the Apple EarPods are labeled on the inside. 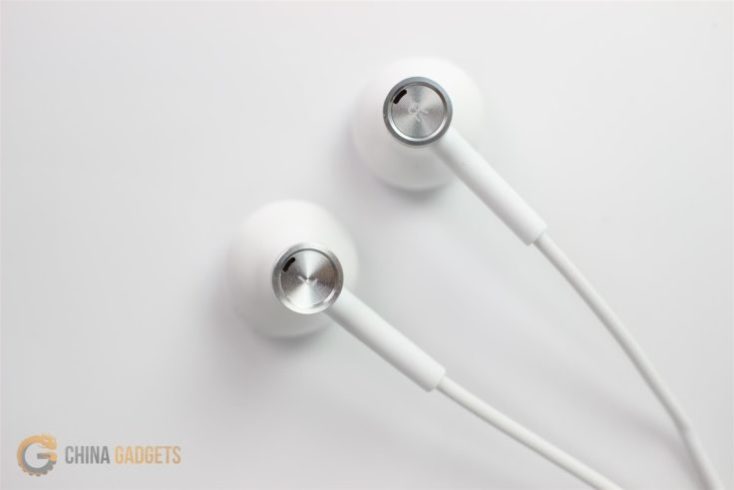 Straight or angled? It’s a divisive issue. Some prefer a straight jack plug, others see the advantages of the jack plug at a 90° angle to the headphone cable. Be that as it may, the Apple jack plug is straight and so Xiaomi decided to use an angled plug.

The last difference worth mentioning is that the headphone cable of the Xiaomi Half In-Ears is flexible directly on the receiver, while the EarPods are made of rigid plastic.

The headphones, which are made of plastic and rubber, have a total weight of 14.1 g according to our fine scale, which corresponds to the factory specifications. The 1.25m headphone cable is also long enough.

In terms of manufacturing quality I could not notice much difference to the headphones from Apple, the Xiaomi half in-ear headphones are solidly manufactured and have no material or processing errors – well done! 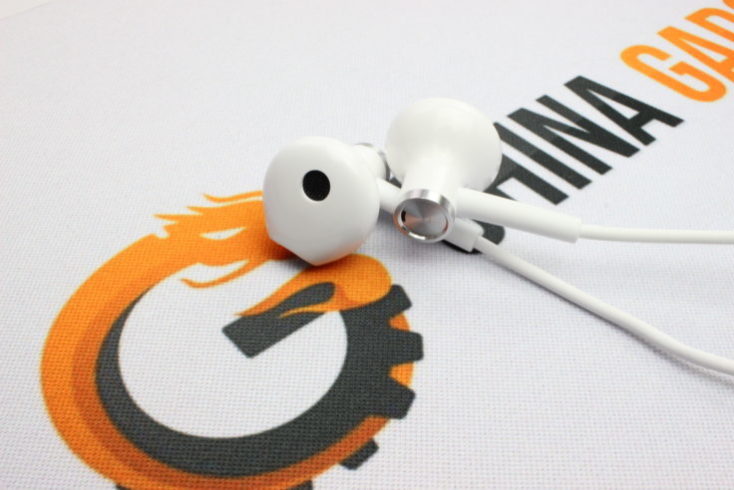 However, the colour white has the disadvantage that it is relatively susceptible to dirt, which is especially noticeable compared to my older EarPods, a general problem of headphones with white cable.

Unlike previous hybrid headphones from Xiaomi, these headphones do not come with a dynamic and a BA driver. Instead of a BA driver, a ceramic driver is used here. Ceramic is known as a material for loudspeakers because it reproduces frequencies very unadulterated and clear. 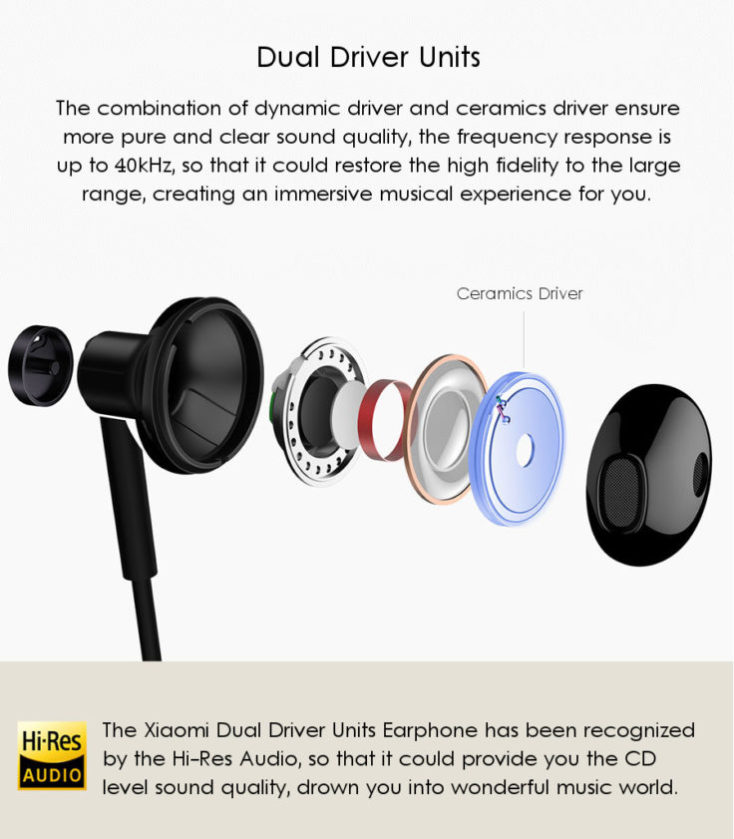 The Xiaomi Half In-Ear is less adaptable to different ear shapes and sizes due to the lack of customization options using ear cushions of different sizes. In the test the fit was personally okay, but I wasn’t a friend of Apple’s EarPods, I prefer a normal in-ear.

In the comparison test with the Earpods the sound is approximately equivalent, the big WOW effect, as already caused by one or the other Xiaomi gadget, was missing. The strengths of the Xiaomi Half In-Ear lie in the high and midrange. How strong the bass is actually depends a bit on how well the listeners fit into your ear. It was okay for me, but still not comparable to a “real” in-ear.

The Control Element – Limitations under iOS

As with the Xiaomi ANC in-ear with jack connection, only the middle control knob works under iOS; the functions “louder” and “quieter” cannot be performed. 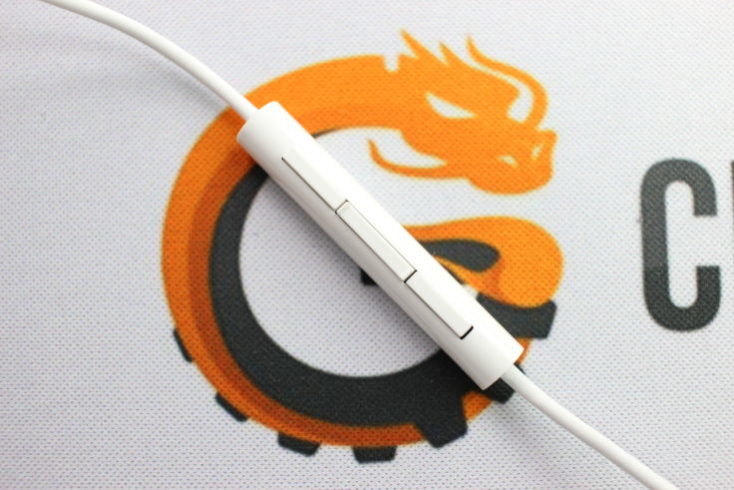 On Android, however, all buttons are functional, just as on Xiaomi’s MIUI operating system, which is based on Android. The weight of the headset is infinitesimal and does not pull the right earpiece out of the ear.

The headset is mounted on the back of the control and dangles at a good height to the mouth. In the test the microphone worked well, my opponent could understand me well and there was hardly any noise.

Overall, the Xiaomi half in-ear headphones are a solid option for all who are fans of Apple’s EarPods. However, I didn’t notice any special difference in sound compared to other hybrid headphones or the EarPods.

First and foremost Xiaomi creates here an EarPod alternative for all Android users who are fans of the EarPods. Here the compatibility is simply reversed, all buttons work under Android, but there are limitations under iOS. Buying these headphones is a bit of a lottery for everyone. In general you cannot say in advance how good or bad the headphones hold in your own ear, this can only be found out by trying them out. But if they fit, then you get a solid headphone that convinces in sound, as long as you can live with a little less bass.