Xiaomi and COWAROBOT present a suitcase that follows its owner

1 Kommentare November 1, 2019by Tim
Hey, guys! Just a heads up: The linked offer is already a bit older and the price of the gadget might have changed or it might not be available anymore.

Most of you probably won’t be able to do anything with the manufacturer name COWAROBOT. But: The Chinese company is the inventor of the “COWAROBOT R1”, the first suitcase that automatically follows its owner. So you don’t have to pull the suitcase behind you anymore. The tech giant Xiaomi probably became aware of this and is now launching a travel suitcase on the market in joint cooperation that is capable of just this – and even more. 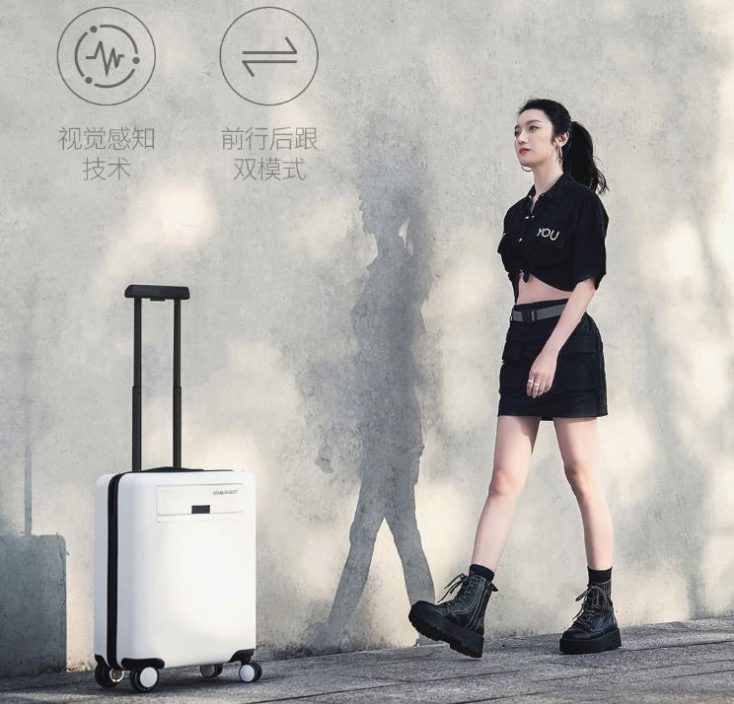 Technical data of the COWAROBOT suitcase

A lot of technology for a suitcase

Obstacle detection, app control, laser detection … no, we are not talking about Xiaomi’s latest vacuum robot. On Xiaomi’s crowdfunding and sales platform “Xiaomiyoupin”, COWAROBOT’s latest travel gimmik has been financed within a short time and is now ready to be available in the China shops as well. For the tech giant Xiaomi, this is not the first excursion into travel accessories: Together with the company 90Fun, Xiaomi has already launched several models on the market, including a metal suitcase, a transparent suitcase and a rolling suitcase, and a hard-shell rolling suitcase under its own flag. We weren’t able to test all suitcases, but in general it can be said: Xiaomi is also among the front-runners of suitcases.

The most important information in advance: With the dimensions 55.5 x 38.4 x 22.5 cm, the robot case is permitted as hand luggage on many flights (depending on the regulations of the airline). The 6400 mAh battery (should last for 20 km) can be removed from the case and taken on board. Wait a minute, a battery in a suitcase? “You can integrate a Powerbank, HA HA”. Yes, it is also included. So you can recharge the battery of the smartphone or the headphones before the flight or on the way to the hotel. The charging time for the battery itself is 5 hours.

With an integrated laser and built-in camera, the suitcase analyzes its owner based on his body shape and type of movement. It is difficult to judge at a distance whether this always works so well. Above all, it is questionable whether a robot can really distinguish many people at an airport on the basis of this data alone. In case of doubt, the suitcase can be pulled directly like a “non-smart” suitcase on the pull-out handle without any adjustments. The mentioned camera is located on the side of the handle.

Important to know: If the connection between the Xiaomi suitcase and its owner is lost (or there is a distance of three meters), the latter receives a push notification on his smartphone. It has to be said, however, that a supposed thief can no longer be stopped the time you look at your smartphone. But who knows.

Design: Modern, but not new

Visually, the 4.5 kg suitcase is based on many other modern suitcases that can be found at the airport. A hard plastic shell, telescopic aluminium handle, the wheels of the case can rotate 360°. And you already have a suitcase. The driving style is supposed to be able to adapt to the ground automatically. This is also a point that has to be confirmed in various tests. The same applies to the specified water and shock resistance.

To protect the contents of the case, it is equipped with an electric safety lock. This can only be opened by entering a pin code or using a smartphone app. LED lights indicate whether the lock is currently open or closed and whether a connection to the app exists. A promotional video for further information:

The launch price for the smart Xiaomi case is 1999 yuan, or $283.26. For a smart case with many functions, that’s not much money – especially if the workmanship is right. Of course you have to ask yourself if you really need the functions and if it’s worth the money. Finally you get a hard-shell rolling case from Xiaomi without smart functions for at least $100 less. In addition, the price in the China shops for us will probably be over $300, after all, the launch price is primarily relevant for Chinese.

But if you own one or the other Xiaomi gadget, you can expect a lot here again. Even if Xiaomi probably didn’t lift too many fingers in the production, but rather acted on a monetary basis behind COWAROBOT. It is not yet clear when a sale outside China can be expected. We will keep you up to date.

But how do you see it: Do you need an autonomously driving suitcase or would you rather keep control of your luggage yourself?

Oh and a cool protective case cover could make the autonomous driving of the suitcase even more fun.