No comments August 24, 2020by Tim
Hey, guys! Just a heads up: The linked offer is already a bit older and the price of the gadget might have changed or it might not be available anymore.

Who doesn’t know these problems? The next meeting’s not for 15 minutes. You could actually take another walk around the block. Unfortunately the elevator ride from your penthouse with panoramic view takes 3 minutes. Thus, it’s probably not worth the effort to travel downstairs. Or: You want to walk in the city park on Saturdays but your son Justus took the Audi Q7 to university? Darn it, guess we’ll take it easy again today. But what is that under the designer couch? Is it the WalkingPad A1 Pro, which you can also walk on in the corner office? Dear China-Gadgets fans, it happened: We have finally tested the supposedly most decadent gadget. 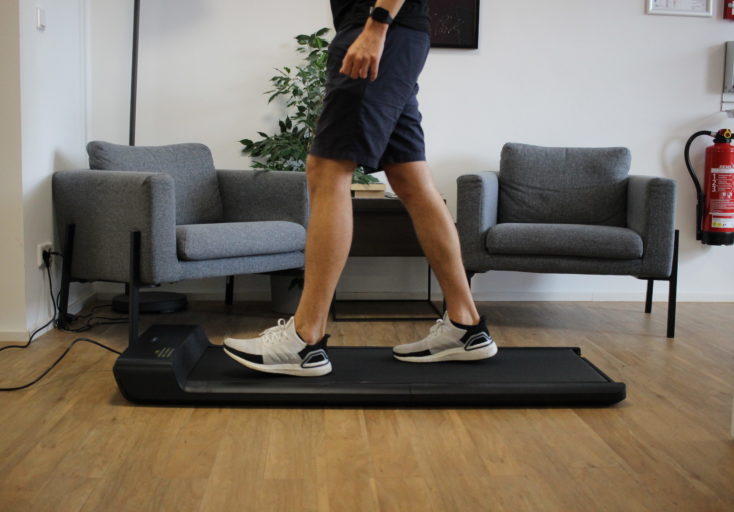 The Walking Pad: a look at the specs

Well, it’s not actually too decadent. There are certainly uses for us everyday Joes for this “sports equipment”, but at first glance, the WalkingPad gives the impression of a gadget that you buy when you already have everything else. This is partially due to the fact that the top speed of 6 km/h is more than just limited and makes it uninteresting for most people. It is simply not a running but a walking belt.

The WalkingPad A1 Pro arrived extremely well packed. The pad was not only packed in one, but in two big boxes. In addition to the treadmill (out of laziness, I’ll just call it by that name) came the remote control, battery, an Allen wrench, the Chinese power adapter, silicone oil, an English manual and a Chinese Quick Guide. Banggood fortunately also included the power supply with the regional plug.

The A1 Pro uses the same basic frame as the C1. In the front there’s a display module in a new look, with a charging socket and 2 orange rollers (orange is always well received by CG anyway). 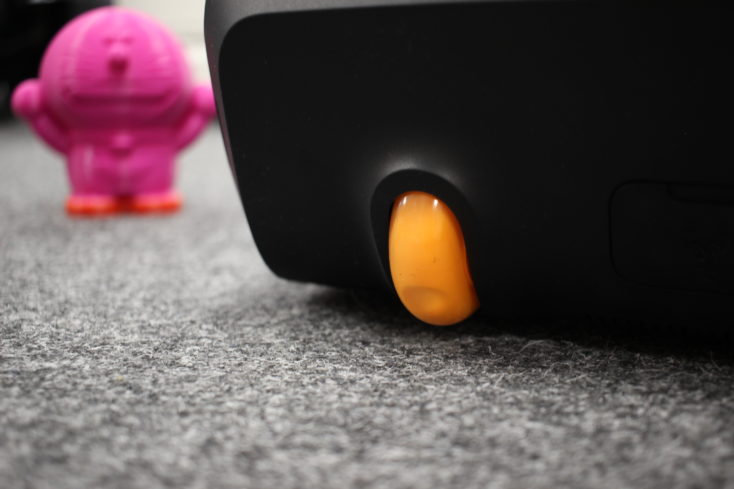 Inside, a brushless DC motor ensures comparatively quiet operation. It has an output of 1.25 HP and, apart from the pad’s color, is the only difference to the “normal” WalkingPad A1, which relies on a brushed motor and is therefore not as efficient. 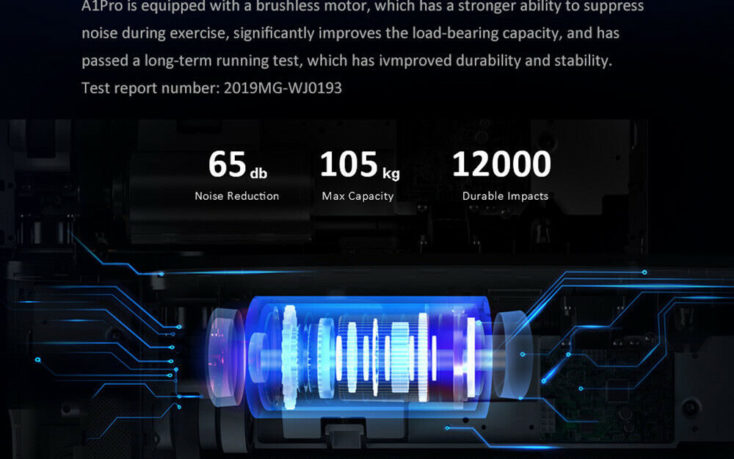 The running surface consists of a wide black plastic strip and has two narrow edge strips on the right and left. What doesn’t bother us, but has irritated us a bit at the beginning, is a dark cross stripe that runs diagonally over the silicone band. 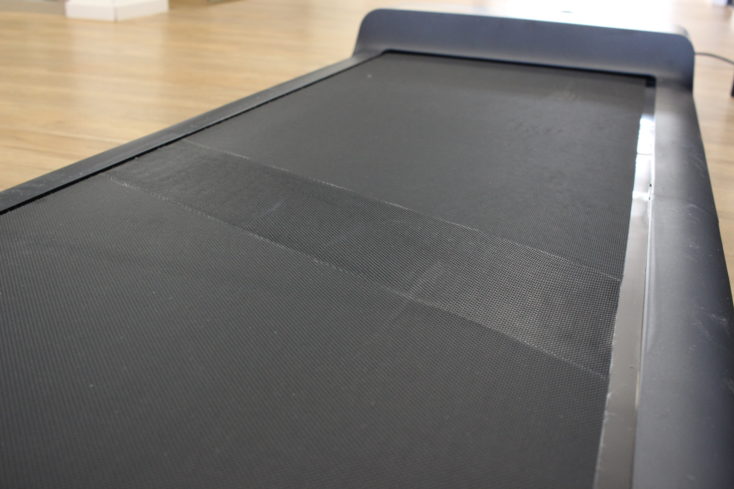 When folded out, the entire unit is 143 cm long and 55 cm wide. The running surface is basically already sufficient (the “but” comes further down). With a height of only 6 cm the running surface appears extremely flat and the elevation to the ground is not difficult to notice when climbing on and off the pad. 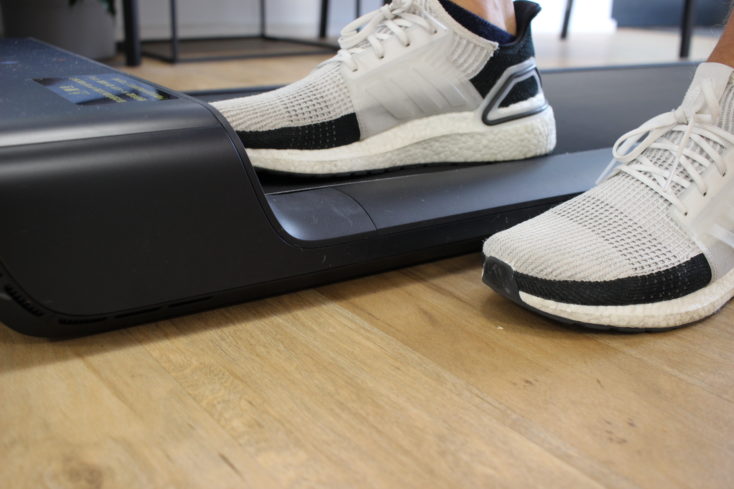 An LED display panel keeps you informed about speed, control mode, time, steps & distance run  even in bright light. There is also a display for various error messages. I find the display module more nicely integrated into the overall picture than with the C1. Between the two rolls is the power switch and the power supply socket. This can be closed with a plastic flap when the unit is not in use. The power cable is 2 meters long. On the right side of the display module is the on/off button. 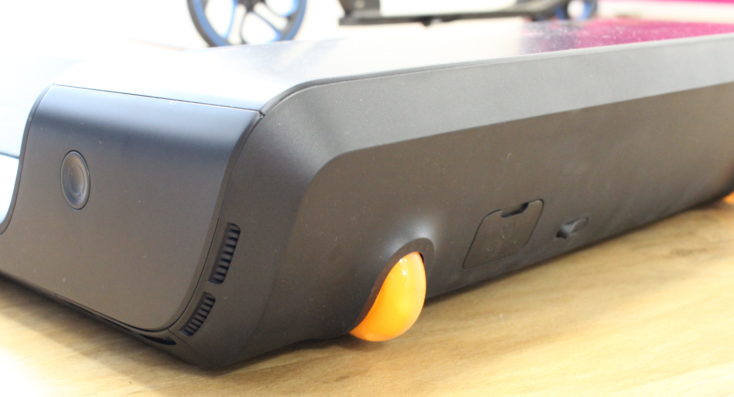 As is already familiar from the rest of the WalkingPad product range, the A1 Pro can also be folded up crossways in the middle of the running surface and is then only a good 82 cm long. Folded in, there is a square window at the bottom with a view to the bottom of the running surface. The pad can then be slid under the sofa to save space. Unfortunately, unlike the R1 Pro, it cannot be leaned upright against a wall. 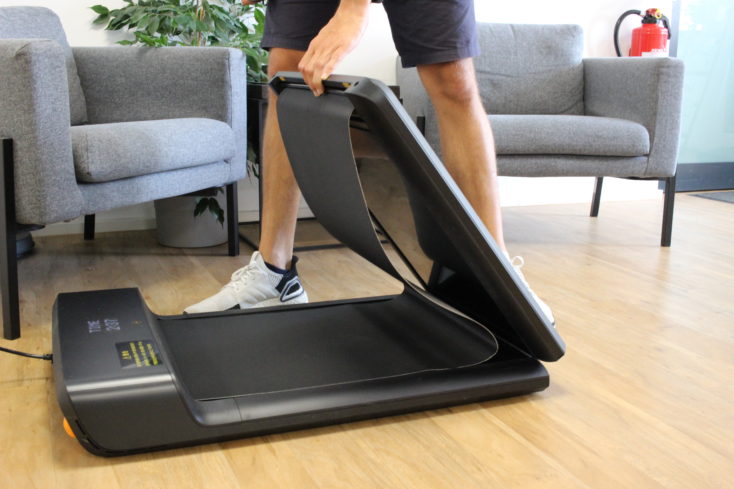 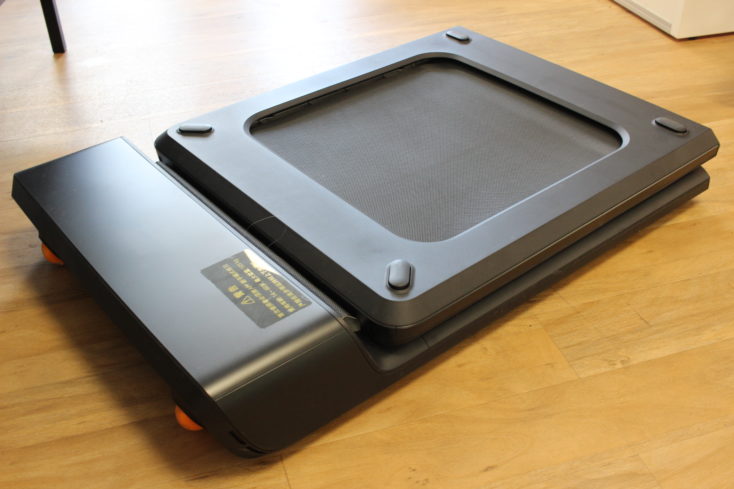 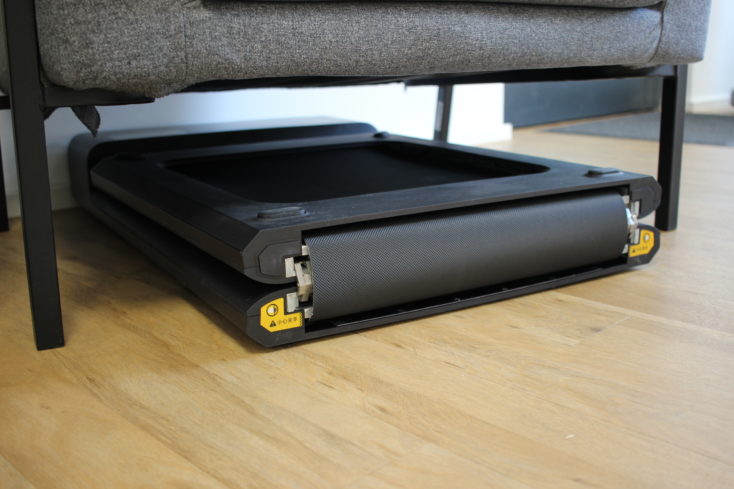 There is no branding on the pad itself. The only reference to Xiaomi is on the remote control’s security loop. It is dark grey and has 4 buttons: start/stop, accelerate, decelerate and change mode. On the back there is a rotating flap for a CR2032 3V battery, which is included. 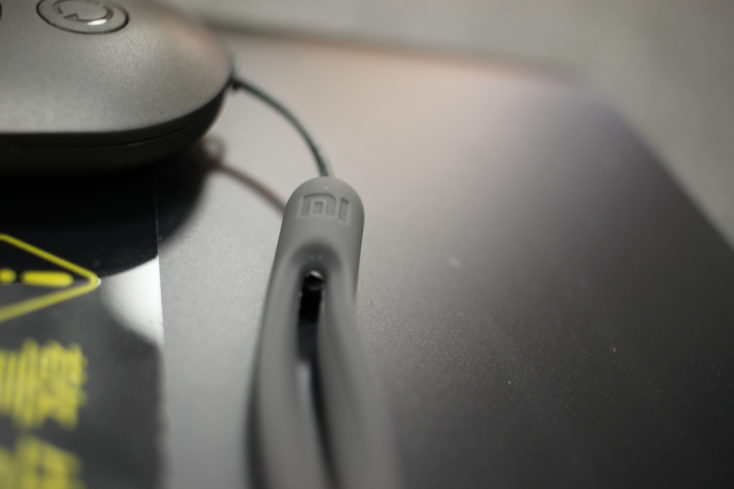 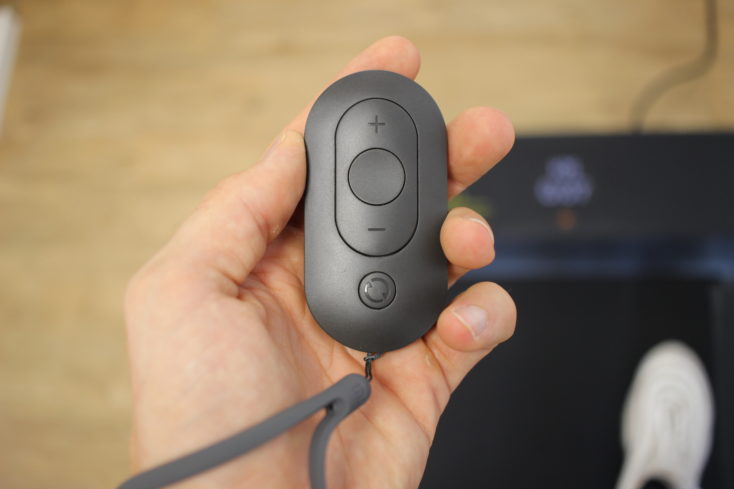 The entire pad is built on a framework of an aluminium alloy. Under the tread you have a “high-density fiberboard” (made of whatever fibers – it is stable!). The black housing is said to have been manufactured using the injection moulding IML process, but we have no complaints about the processing. There are also no visible screws. The rubber feet serve their purpose on our office carpet and nothing slips on the laminate floor. But for tiles I would recommend an anti-slip mat.

As I painfully had to learn that the WalkingPad- and the Kingsmith APP is completely useless, I followed the instructions of the Chinese Quick-Guide as good as I could. It leads you to the Mi Home app. For all those who already own some SmartHome devices from China this makes sense anyway, but also all others will have to go through the registration process there, because the pad is in a safety mode with a maximum speed of 3 km/h when delivered. Regrettable: The WalkingPad A1 cannot be registered via the locations such as Germany. Therefore you have to enter Mainland China as location. To be able to follow the instructions, you should change your language to English of course. 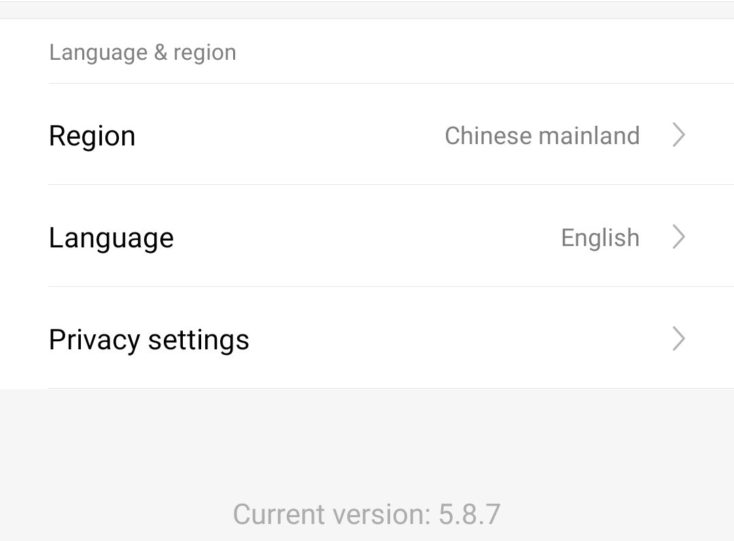 As usual with other devices, the scanning and finding of the WalkingPad runs smoothly. After naming and allocation to a room, you can start directly and after a short introduction, the maximum speed of 6 km/h is also unlocked. The app enables the start, mode change, software updates, parental control and password protection. You can also personalize what you want to be shown on the LED display. You can also view your history, including distance run, steps, activity time and kilocalories burned, and set personal goals. 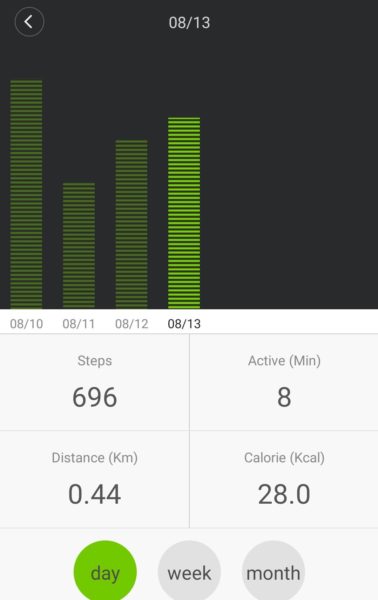 A calibration of the running surface can also be done thanks to the app. When you start the calibration, the treadmill accelerates to 4 km/h. At the foot of the walking pad there is an inlet for the hexagon key on both sides. This allows you to “steer” the alignment of the treadmill and control that it stays centered. In the test I did not have to readjust once after the calibration at the beginning. 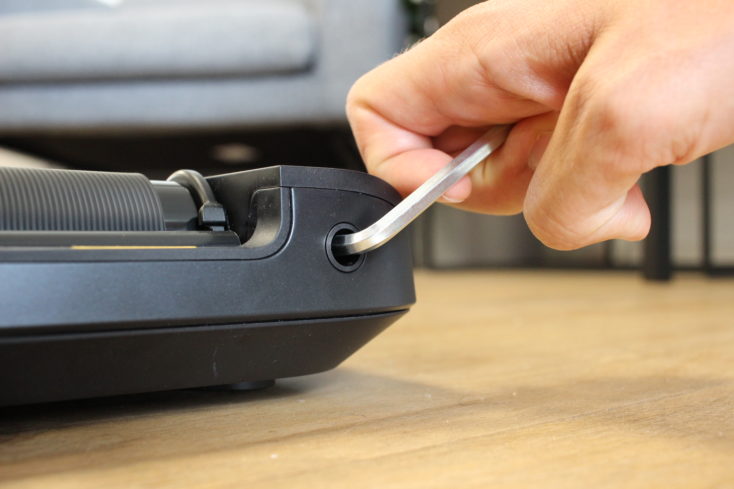 It’s okay: What is the WalkingPad A1 Pro good for?

The LED indicator on the display shows the current mode. There are three of them: Standby, Manual and Automatic. From standby you can (in theory) start the pad at any time via smartphone or remote control. In 80% of the cases this works, but sometimes you had to go and press the button on the side of the display module. 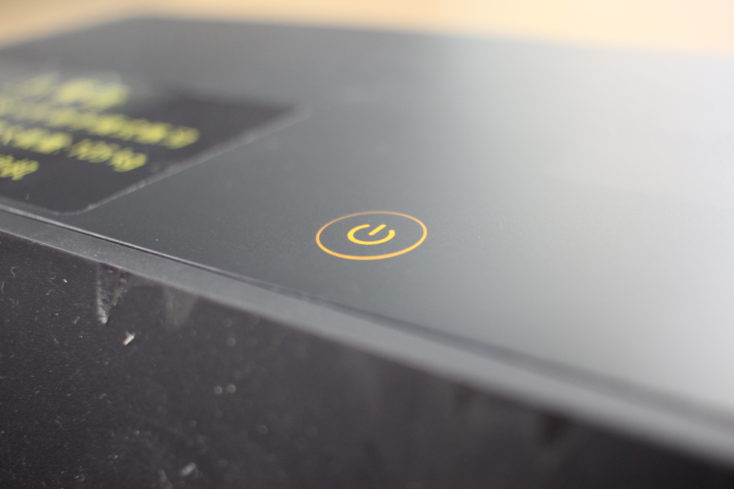 The Manual Mode delivers exactly what you expect from it: You control start/stop and speed in 0.5 km/h increments at the touch of a button. Maximum speed is 6 km/h, the starting speed can be set individually in the Mi Home app. There you can also activate the start by automatic recognition of the position. Then you only have to step far forward on the treadmill and after a 3 seconds timer the belt starts running. The most comfortable way to control the treadmill is with the remote control. Via the app, commands often arrive very delayed.

If you leave or fall of the WalkingPad, the WalkingPad A1 Pro will simply stop after a short time. It’s a great pity that even in manual mode you don’t have the freedom you would like to have with such a device. If you are not standing on the treadmill, the WalkingPad notices this after a few seconds and stops. Flying starts and pranks are thus prevented. Jens also had the idea to get on the treadmill with the Mi Scooter, which we are currently testing, but the WalkingPad didn’t want to play along. But with my non-motorized scooter I had no problems.

Besides the manual mode there is also the automatic mode. The so-called Feet-Control allows you to control the speed by the position on the WalkingPad. If you are far in front, the pad accelerates. If you can’t keep up with the pace and “wander” further into the middle, the speed will be reduced if necessary. If you are too far back in the critical zone, the pad will eventually come to a standstill. Unfortunately the sensors do not work ideally. Sometimes the WalkingPad stops working shortly after the start, apparently without reason. But once you have managed to start walking, the problem no longer occurs. Once you understand how strongly the pad reacts (the sensitivity can be adjusted in the app in 3 levels), the automatic mode is also very pleasant to use.

In general, the WalkingPad works at a comfortable volume. The sound level meter measures a maximum of 60 dB. In the more relaxed stages between 2 and 4 km/h, however, it is only 50 dB. This is quiet enough to watch videos on the TV or mobile phone. Unfortunately the confirmation beep after each (!) command is totally annoying. We haven’t been able to find an option to turn it off. Of course, you can break open the case on your own and take out the speaker – but the warranty would then expire. We hope for improvement of the software.

The verdict: Should I buy a WalkingPad A1 Pro??

We had our fun with the device, no question there. Maybe the boys and girls here are just too sporty to see any added value in the WalkingPad in terms of training. But for older people, workaholics and outdoor enthusiasts, the A1 Pro can definitely be an added value. 6 km/h is of course a maximum slow trot, but the pace is faster than expected. There’s absolutely nothing to complain about on the hardware – mega workmanship and chic design. Moreover, thanks to its small dimensions, the pad will find some room in most homes and is easy to transport as long as you don’t have to lift it. But towing it upstairs is only possible for two people.
The price for just under $400 is okay for the WalkingPad A1. It is thus a bit higher than the price of the C1, but considerably lower than the newer S1, both of which have similar specifications. Usable home treadmills are not available for less than $500, if you want to make a comparison. For us, however, it is a completely separate category that focuses on something else. The reason for purchase stands and falls with your demands on such a WalkingPad.