Happy Xiaomi-Day you could say. We were sitting in front of the livestream of the launch event of the new Xiaomi Mi 10 and Xiaomi Mi 10 Pro flagship, which were presented in China today. Much of the information was already known before, but there were still surprises. The Xiaomi Mi 10 Pro is, according to DXOMARK benchmark, currently the best camera smartphone on the market and can even be quickly charged with 50W.

The normal Xiaomi Mi 10 is a bit lighter equipped, but starts “only” for a price of about $580 in China; we expect a RRP of $600. All further information can be found in the article. What do you think of the Xiaomi Mi 10 and Xiaomi Mi 10 Pro?

Even though Xiaomi has many top models in its ranks, strictly speaking there is only one flagship: the Mi Smartphone. The Xiaomi Mi 9 was introduced in February 2019 and has received many modified versions over the year, such as the Mi 9T or Xiaomi Mi 9 Lite. Now the new flagship smartphone has finally been introduced. The Xiaomi Mi 10 and Xiaomi Mi 10 Pro should finally bring the manufacturer into the high-end segment, even if the more price-conscious customers are slowly being put off. 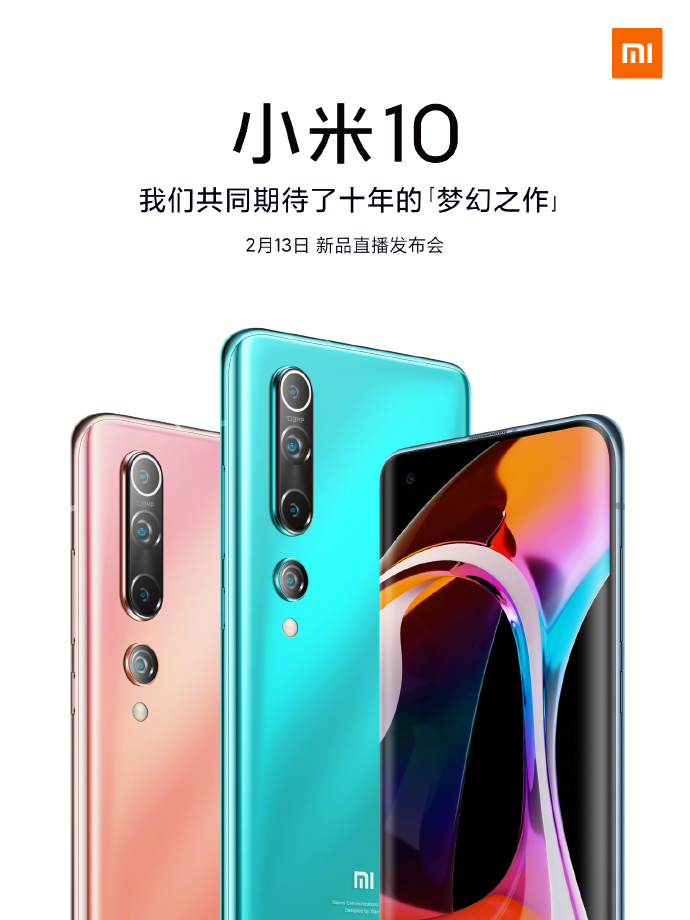 The Flagship series is traditionally conservative, leaving the experiments like pop-up cam or front camera at the bottom of the screen to other series. With the new Mi 10, however, Xiaomi presents itself from a relatively new side. The Xiaomi Mi 10 works with a hole punch design, which means that the front camera sits in the display, but not under the display. For this purpose, there is a hole in the display, like for example in the Samsung Galaxy S20, in which the front camera sits. This makes it the second smartphone with a hole-punch design under the Xiaomi flag. In contrast to the first one, the Redmi K30, the Mi 10 and Mi 10 Pro only uses a front camera in the hole-punch hole in the upper left corner. 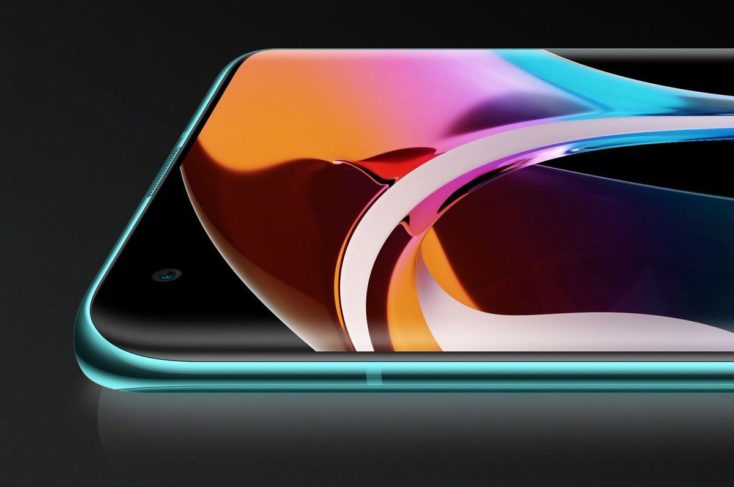 Already the first leaked photos of the front confirmed the curved design of the Mi 10, just like the hole-punch camera in the upper left corner. The curved design seems to be a bit different than for example the Xiaomi Mi Note 10, the curved sides of the specially made panel are not quite as “buckled”.

The Mi Note 10 model also had to be used for the back, the arrangement of the cameras strongly reminds of the 108 MP smartphone. One difference between the two versions is the number of rear cameras: the Mi 10 is equipped with four cameras, the Mi 10 Pro even with five. One sensor is located individually under the remaining module. For protection, Xiaomi Gorilla uses glass for the back, while the Mi 10’s color options are limited to a blue, green and pink/red version. 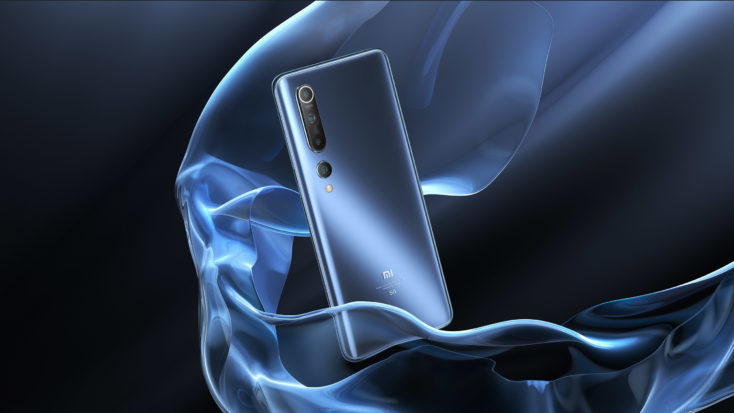 The Xiaomi Mi 10 Pro is available in two colors: dark blue and a rose-white, which we haven’t seen before.

Since the Xiaomi Mi 8, the manufacturer has been consistently relying on AMOLED panels for its flagships, so of course the Xiaomi Mi 10 is also equipped with an AMOLED display – the most powerful to date. The display offers a screen diagonal of 6.67″, which means it is the same size as the Redmi K30/Pocophone X2. The AMOLED panel offers a high contrast ratio of 5000000:1. Since AMOLED displays, unlike LC displays, can illuminate each pixel individually, you have a “real” black, which is what makes this high contrast ratio possible. The maximum brightness is with 1120 nit but extremely high. For comparison, the iPhone 11 Pro Max offers a maximum brightness of 1200 nit. The average brightness here is 800 nit.

The comparison to the new iPhone is also provided by Xiaomi itself, however, with regard to the JNCD value. This stands for just noticeable color difference and indicates that with a value of <1 there is no difference in color reproduction. In this concern, the OnePlus 8 offers a value of 0,8, but the Xiaomi Mi 10 is currently the industry leader with a value of 0,55. 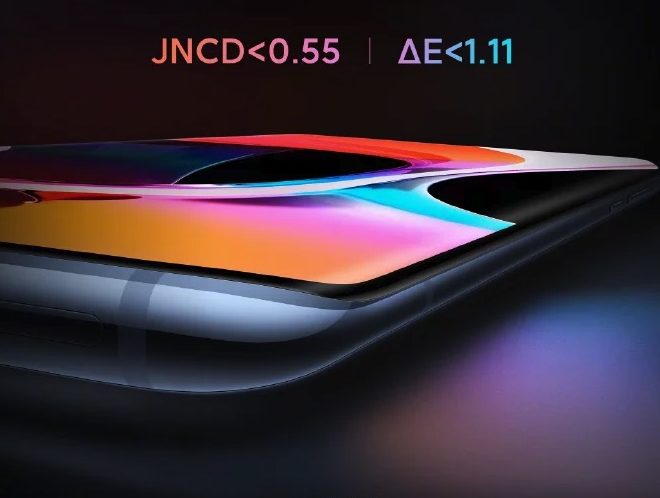 In practice, however, one might notice much more of the 90 Hz refresh rate. This is the first time that a top smartphone from Xiaomi is equipped with a higher refresh rate. However, the current Samsung Galaxy S20(+) already uses a 120 Hz refresh rate. This also offers a touch sample rate of 240 Hz, whereas the Xiaomi Mi 10 Pro “only” offers 180 Hz – still a high value. The refresh rate indicates how often the image is updated per second. The current standard is still at 60 Hz, but the higher rate makes animations and mobile phone operation look more fluid.

The Xiaomi Mi 10 smartphone works with the brand new Qualcomm Snapdragon 865 processor, which Xiaomi has already officially confirmed in advance. This was to be expected, but it’s nice to see that Qualcomm is one of the first companies to offer this CPU to the still quite young company. The Octa-Core processor consists of a “Prime Core” with a clock frequency of 2.84 GHz, three more clocks with 2.42 GHz. The other Cortex A55 Quad-Core Cluster clocks “only” with 1.8 GHz. 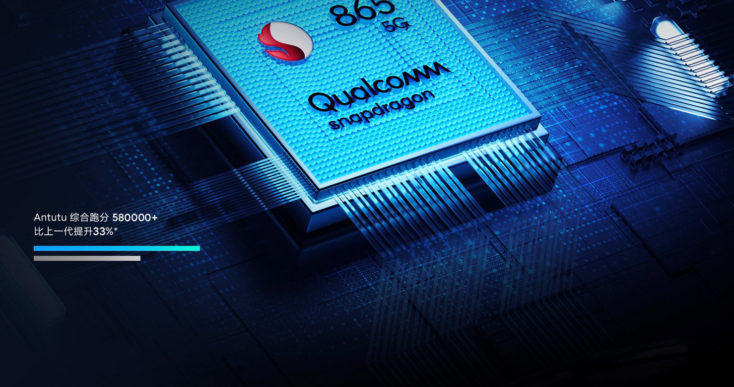 But more interesting is that the Xiaomi Mi 10 (Pro) together with the Samsung Galaxy S20+ is one of the first smartphones with the new LPDDR5 memory. This RAM is faster and more efficient than the LPRR4X memory, which has been established as standard for quite some time. In addition, there is also fast UFS 3.0 mass storage, which is also used in the OnePlus 7T, for example. The memory configurations are once again diverse: 8/128 GB, 8/256 GB and 12/256 GB were expected. The only question is which configuration is possible with the Global version. 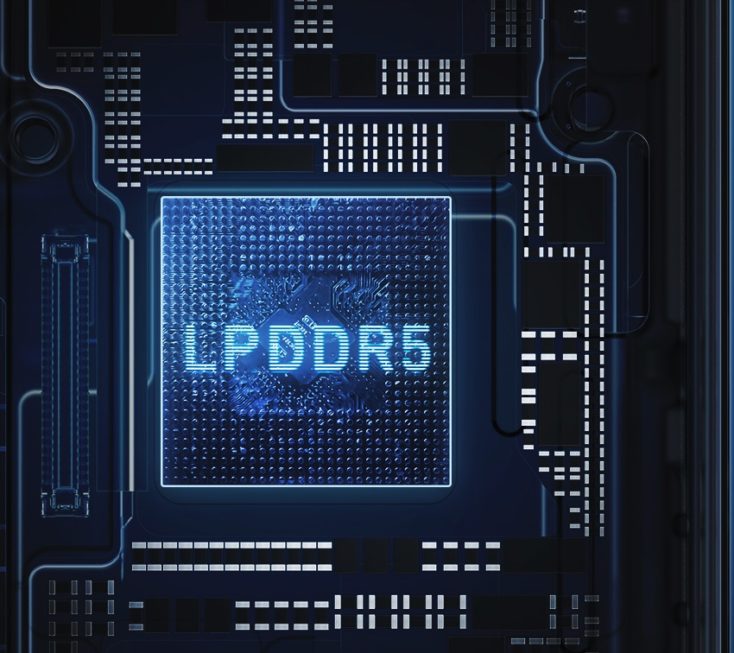 The choice of processor also makes it clear that the new flagship with 5G support is coming onto the market. That’s not a big surprise either, Xiaomi itself has confirmed that they plan to release more than 10 new 5G smartphones in 2020. The aforementioned Redmi K30 will also be equipped with 5G. Although the new mobile phone standard hasn’t really arrived everywhere yet, China is already completely banking on it. For example, the manufacturer Realme has confirmed that it will only release 5G smartphones in the future. 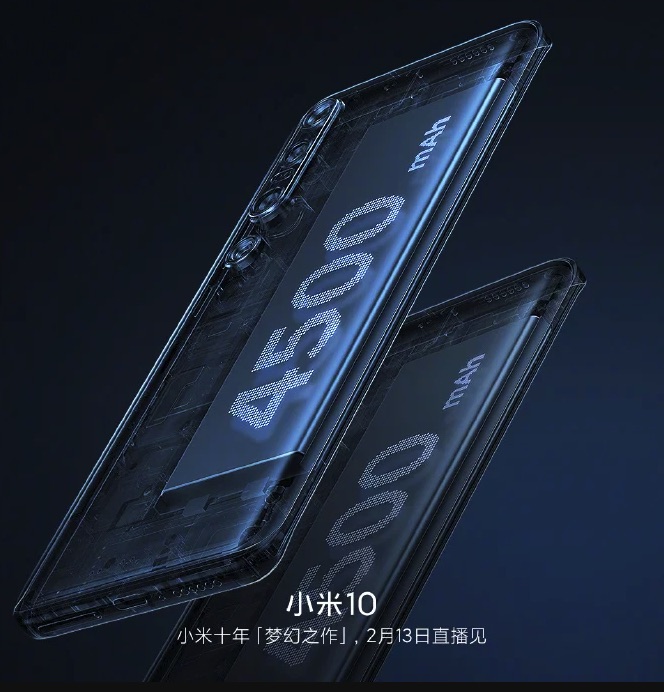 With a glance at the Xiaomi Mi Note 10 and the Mi Watch, you know that the manufacturer likes to “get inspiration” from other manufacturers. Not so with the charging technology, where they do pioneering work. The Xiaomi Mi 9 set a record with 20W cordless charging, recently Xiaomi even introduced 100W Super Charge Turbo. The Xiaomi Mi 10 Pro even supports 50W fast charging. That’s where you catch up with the Oppo Realme X2 Pro. With the Mi 10 Pro a full charge should take 45 minutes. There is even a faster 65W USB charger included.

Wireless charging is also possible again. This time you can charge the phone wirelessly with 30W, this charging technique also falls under Xiaomi’s Mi Charge Turbo and can already be found in the Xiaomi Mi 9 Pro. It’s also interesting that the phone can charge other Qi capable devices wirelessly.

The third smartphone with 108 megapixel camera

The Mi 8 came with two, the Mi 9 with three and the Xiaomi Mi 10 with four cameras. This was no big surprise, already cheap smartphones like the Redmi Note 8 appeared with a quad camera. The Xiaomi Mi 10 Pro now uses the new 108 megapixel Samsung ISOCELL Bright HMX, which already made headlines in the Xiaomi Mi Note 10. After the Mi Note 10 and the Samsung Galaxy S20 Ultra, it is now the third smartphone with this sensor. It’s interesting to see how the actual competitors Xiaomi and Samsung work closely together. 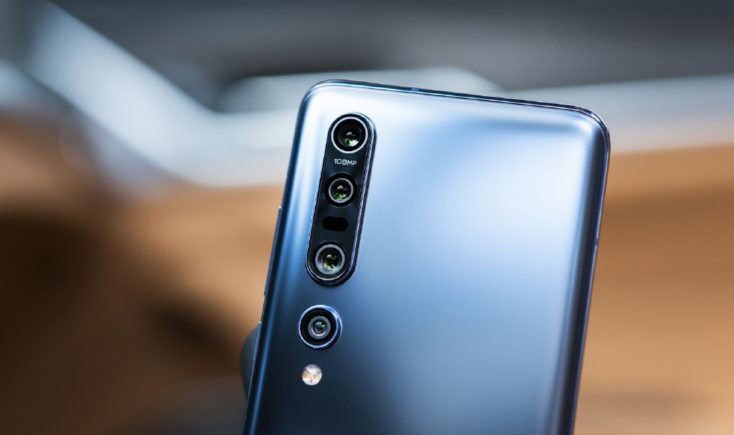 In addition to the main sensor, the Pro version has a 20 megapixel ultra-wide-angle camera with ƒ/2.2 aperture, a 12 MP telephoto camera with ƒ/2 aperture and 2x optical zoom, and an 8 MP ultra-telephoto camera with ƒ/2.0 aperture and optical image stabilization (OIS) on the back. This setup ensures first place on the popular DXOMARK camera benchmark, ahead of the Huawei Mate 30 Pro with a total of 124 points. The camera also has the ability to record 8K video. The front camera of the Mi 10 Pro offers a 20 megapixel resolution. 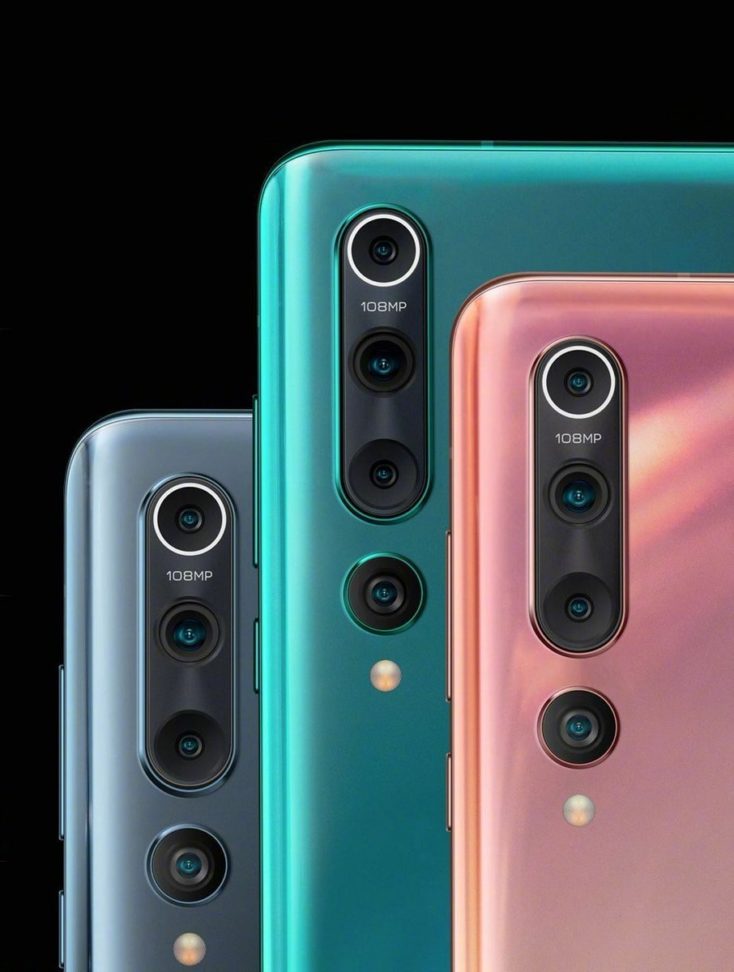 The equipment of the normal Mi 10 looks a bit more simple. The same 108 MP sensor functions as the main camera, with a 13 megapixel ultra-wide angle camera at the very bottom. There’s also a 2 megapixel macro sensor with a close-up limit of 2 cm and a 2 MP portrait sensor for additional image information. In contrast to its direct predecessor, there is no telephoto camera here. 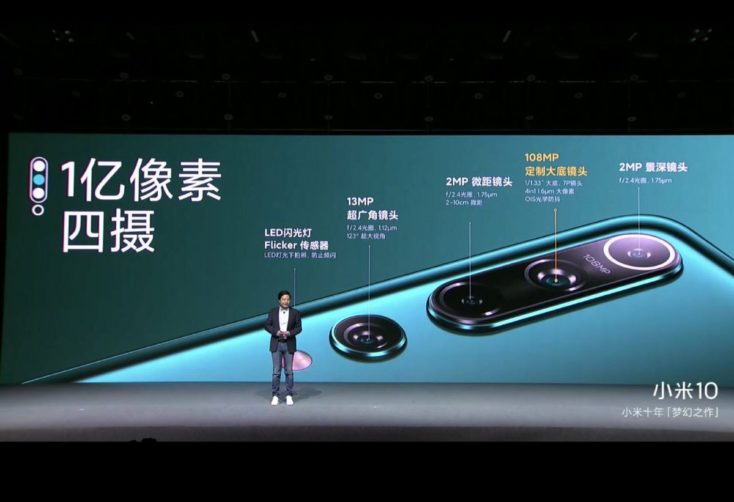 In the Mi Note 10 the sensor couldn’t convince us completely, which is also due to the worse processor, which apparently couldn’t process these large amounts of data as well.

The operating system on the Xiaomi Mi 10 is crystal clear: The Xiaomi Mi Note 10 has already been released with MIUI 11, and so will the new flagship with Xiaomi’s new system interface. After all, this is already available for older models like the Mi 9T Pro. Xiaomi has reworked the look a bit, the interface looks lighter and more modern, an app-drawer is also planned. The system will be based on Android 10.

The Xiaomi Mi 10 is also 5G compatible due to the Snapdragon 865 processor from Qualcomm. Both 5G standalone and 5G nonstandalone is possible. 5G is not yet so common here, but in China it is accordingly. Nevertheless it is nice to be on the road with the Mi 10 in a future-oriented way. It is also exciting that the Mi 10 uses WiFi 6, the new standard for local area networks. However, the now presented China version is not equipped with all LTE bands, the Global version, which will be presented on 23.02., will be equipped with it. 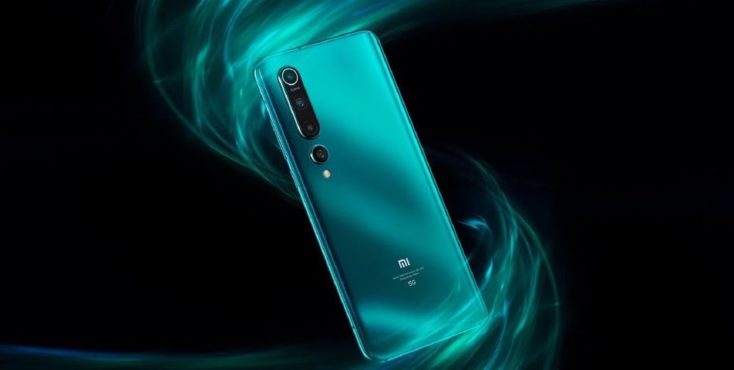 In addition, there is of course NFC, an infrared blaster for remote control, a dual SIM slot, but unfortunately this does not leave any room for memory expansion. Also Dual GPS is on board again, this was already integrated for the first time with the Xiaomi Mi 8.

Xiaomi has always been known for its enormously good price-performance ratio and that’s exactly why it’s so popular. Even the Xiaomi Mi 9 was available for a “bargain price” of about $350 from China relatively soon after its release. Especially after the Mi Note 10 and the news that one cannot keep these cheap prices forever, many feared a price increase. This is also given, but not as high as many feared in the run-up.

As we liked the Xiaomi Mi 8 and the Xiaomi Mi 9 so much in the review and hardly left any room for criticism, we are optimistic after the presentation also about the Xiaomi Mi 10. Especially the display sounds more than promising, although not everyone is a fan of the curved design. There won’t be anything to complain about in terms of speed, the combination of the new top processor and fast memory will convince. The big mystery is certainly the camera. The benchmark drives up the anticipation, but the Mi Note 10 Pro already scored relatively well there.

Yes, Xiaomi’s flagship has become more expensive. But, if you compare it with the Samsung Galaxy S20 with quite comparable equipment, Xiaomi is still comparatively very affordable. Xiaomi would like to reach the top with the Mi series in the long run, but the price has to rise accordingly. After all, Xiaomi also has enough other models under the Redmi and Poco brands that offer similarly good performance for less money.