0 Kommentare January 29, 2021by Thorben
Hey, guys! Just a heads up: The linked offer is already a bit older and the price of the gadget might have changed or it might not be available anymore. 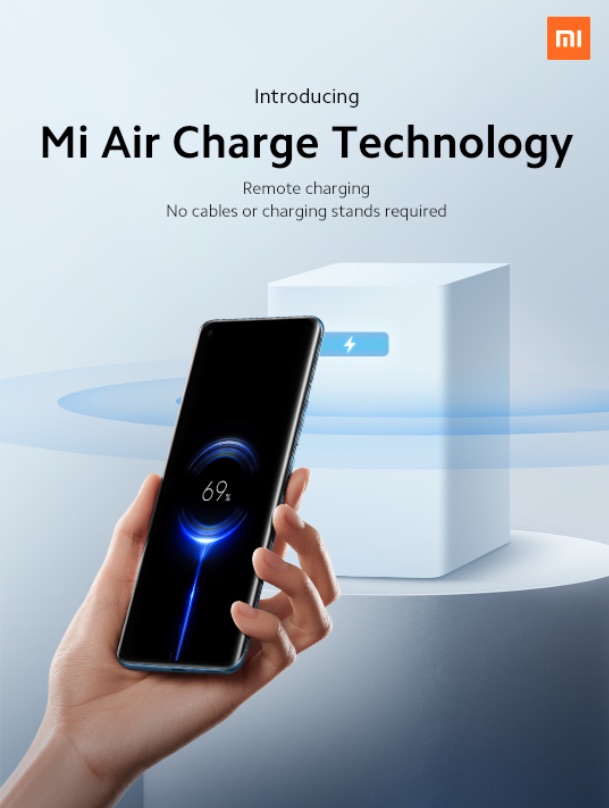 What is Mi Air Charge?

The new technology from Xiaomi offers the first “true wireless charging“, Mi Air Charge has little to do with the Qi charging standard. The wireless charging system seems to be much more a part of the living room, because this first generation is a relatively large, white box that enables true wireless charging. It takes up a similar amount of space as one of Xiaomi’s air purifiers. In the first videos, you can also see a display that shows how many watts it is currently charging at.

The wireless charging even takes place when you are in motion with your smartphone, i.e. walking through the room and objects like a sofa should be “in the way”. In this first generation, however, Mi Air Charge “only” offers a charging power of 5W, similar to the first Qi-enabled smartphones. That sounds like little, after all, Xiaomi even already installs 50W Qi charging in the Xiaomi Mi 11. However, the Xiaomi Mi Air Charge Technology can charge several compatible devices at the same time with 5W! The technology is also not limited to smartphones, but is equally compatible with smartwatches, headphones or Bluetooth speakers. However, no compatible hardware has been presented yet. However, knowing Xiaomi, that should not take too long.

How does Mi Air Charge work?

According to Xiaomi, the core technology of Mi Air Charge is energy transfer and room localization, which is why the new wireless charging also works through objects, in motion and at a distance. For this purpose, Xiaomi has not only installed 5 phase interference antennas in the Mi Air Charge (we assume that is the name of the charging station), but also a phase control arrangement of 144 antennas. They are responsible for the energy transmission part and send millimeter-wide waves to the receiver via beamforming.

But the receiver, in this case the smartphone, must also have the corresponding components. The cell phone also needs such an antenna array, but it only consists of 14 antennas. One of them is a so-called beacon antenna, which is responsible for determining the position. The remaining antennas can convert the signal from the charging station into electrical energy via rectifier circuitry.

Wow – finally another innovation on the smartphone market! The Xiaomi Mi Air Charge Technology almost sounds like science fiction! We can hardly wait to try out the technology. Of course, 5W is now very little, especially for a smartphone, but this is the first generation and perhaps charging habits will change as a result. Smartphones might not be the main target of Mi Air Charge, but many small smart home devices that are distributed in the apartment/house. You then have a central “charger” in the house that charges all other compatible devices wirelessly.

What do you think of Mi Air Charge? Is it the future for you or do you have any (health) concerns? Let us know in the comments!