8 Kommentare August 13, 2021by Alex
Hey, guys! Just a heads up: The linked offer is already a bit older and the price of the gadget might have changed or it might not be available anymore.

You can get the global version of the Xiaomi Mi Band 4 at GShopper for only $7.99. Just use the gift code 05FEEB95D6 in the shopping cart to get this price.

The Xiaomi Mi Band 2 was a milestone for Xiaomi. It convinced with a lot of power for a small price and could pave the way for the also very successful Xiaomi Mi Band 3. Now the successor awaits us: the Xiaomi Mi Band 4 offers an even sharper color display, music control and swim tracking. 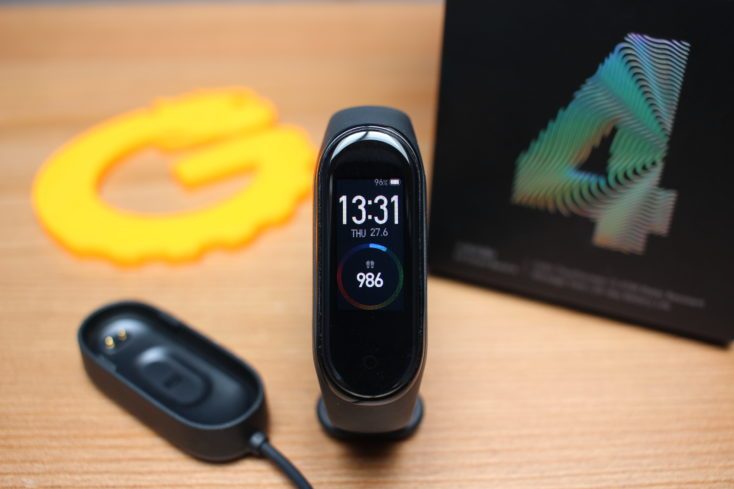 The Mi Band 4 hasn’t changed too much in design and is reminiscent of a combination of Mi Band 2 and Mi Band 3. The shape of the tracker has also remained true to the familiar capsule design. So the bracelets can be changed easily again and even the bracelet of the Mi Band 3 fits to the tracker of the Mi Band 4 and vice versa. So you can continue to use your old bracelets, at least the official ones. We still have to test third-party wristbands for compatibility.

The original bracelet seems to be exactly the same, as it is also made of TPU and the official Xiaomi website offers a universal bracelet for Mi Band 3 and 4. On the underside of the tracker is again the heart rate monitor and this time also the two charging contacts that connect the Mi Band 4 with the new charging cradle. So it’s clear that the last generation charging cable is not compatible and you still have to take the tracker out of the wristband to charge it. 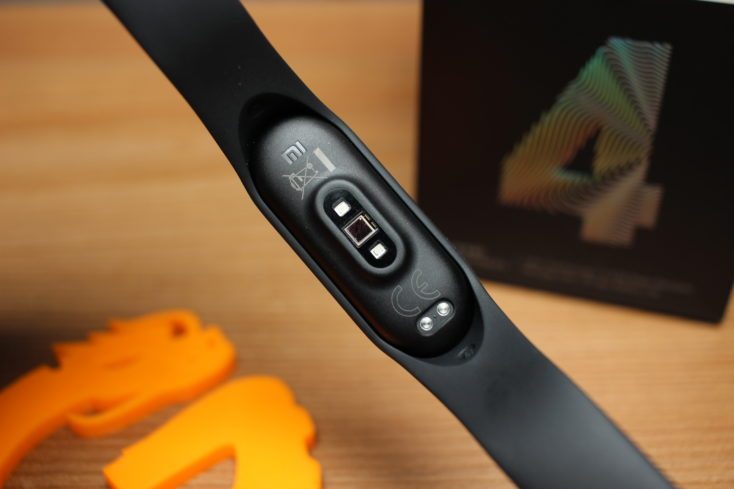 Once again, the quality leaves nothing to be desired. The tracker sits bomb-proof in the bracelet and the closure of the bracelet still works as easy and good as with the Mi Band 3. Even if the latest Mi Band with 22.1 g weighs a little more than its predecessors, the wearing comfort is right. Already after a short time you forget that you are wearing the Fitness Tracker.

Where the Mi Band 3 still had a not quite so sharp black-and-white display, the Mi Band 4 now brings a color display for the first time! The OLED technology of the predecessor is still used, but the resolution of the display is significantly increased by ~180%. With 240 x 120 pixels you get a sharpness of 282 pixels per inch and thus equal the Honor Band 4.

The new display is not only much sharper, but also much brighter than the Mi Band 3. Already the third of the five brightness levels of the Mi Band 4 is on the level of the Mi Band 3. Level 4 is the perfect setting for me, level 5 is only needed in direct and strong sunlight.

Of course the display, enlarged to 0.95 inch (+40%), is a touch screen again and the glass is not quite as rounded this time as it was on the Mi Band 3. This was one of the biggest criticisms of the Mi Band 3 as the strongly rounded glass caused a lot of reflections and therefore the display was harder to read. It was also more susceptible to scratches as the glass protruded further than the bracelet (3.7mm). The 4 is not quite as flat as the Mi Band 2, but 1 mm flatter than the 3. Also the button below the display is no longer marked by a depression, but only by a small circle symbol. 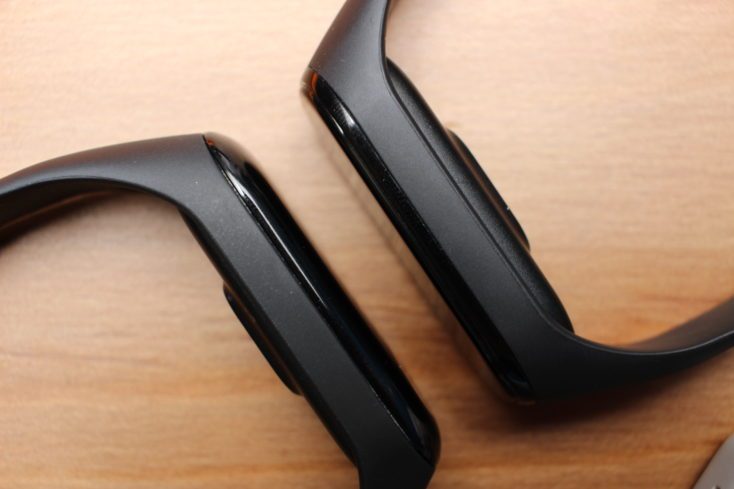 Even though the Mi Band 4 in the official Mi Fit app already offers very strong 53 Watchfaces (vs. only 3 in the Mi Band 3), many of you and we would like to have more ads to choose from. Fortunately the Mi Band 4 has a big community with many good developers like the generations before it. So you can already find the app “MiBand4 – WatchFace for Xiaomi Mi Band 4” in the Play Store with which you can currently get 51 more Watchfaces. Although the app is still in its beta stages, it is free and works quite well. 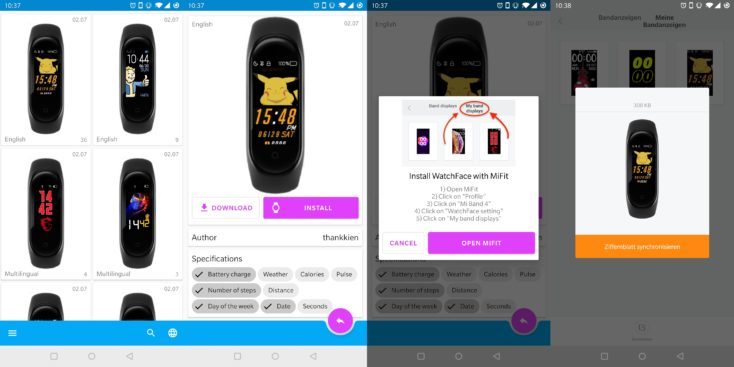 To add a new watchface simply select one from the overview and click on “INSTALL”. Then switch to Mi Fit and go to Mi Band 4 Settings and “Band Display Settings”. There switch to “My Band Displays” and just synchronize the new Watchface – done! If you still have questions, write them in the comments!

The new Fitness Tracker now supports six sports directly on the belt (with belt 3 there are only two). The sports are as follows: Running (jogging), treadmill, cycling, walking, free training and swimming. In addition, you can now officially control your music from the band and the band can lock itself as soon as it is released from the wrist. Furthermore, you can talk to the Xiao Ai assistant with the NFC version and use the Mi Band 4 as a bus card again. These two functions will most likely only be interesting for China.

The battery has also been increased to 135 mAh in order to achieve a runtime of 20 days despite the larger display. If Xiaomi will be able to do that, we’ll tell you (hopefully only) in about two weeks. But the loading time is very good. In 75 minutes the Fitness Band is fully charged and should last for at least two weeks, depending on brightness and usage. 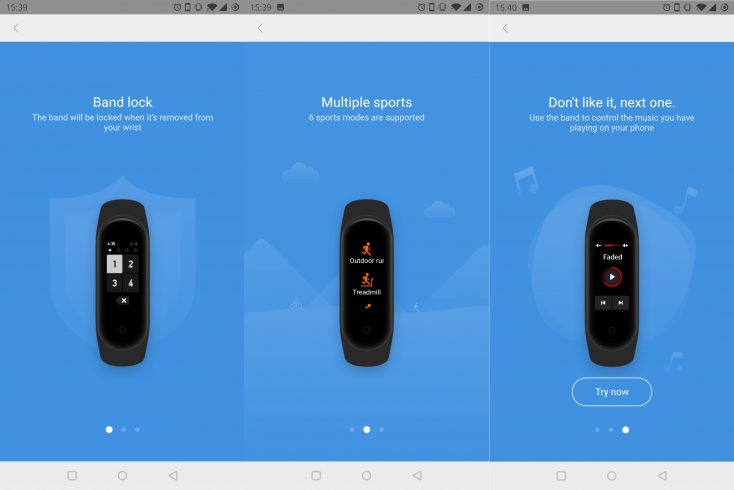 The new colour display of course also opens up completely new possibilities in the design of the software. All icons have been revised and now shine in all possible colors. On the band itself you have access to the status (steps, distance, calories), the notifications, weather (Weather), the sports modes (Workout), the heart rate and more. Behind “More” the following functions are hidden:

Also the music control works great overall. But you have to plan a latency of about one second, both at the first start (synchronization) and the display after pressing a function key. But even with Spotify you get the title displayed, have the possibility to play the next or previous title, and can even change the volume. You can’t even do that with the more expensive Huami Amazfit Cor 2 Fitness bracelet.

You can track almost all your sporting activities, even without a connection to your mobile phone. This is then synchronized as soon as both devices are connected to each other again. GPS is of course only possible in conjunction with the smartphone and is only used for tracking jogging, cycling and walking. This is definitely justifiable with a cheap gadget like the Mi Band; if you need an integrated GPS module, take a look at the Huami Amazfit Bip. 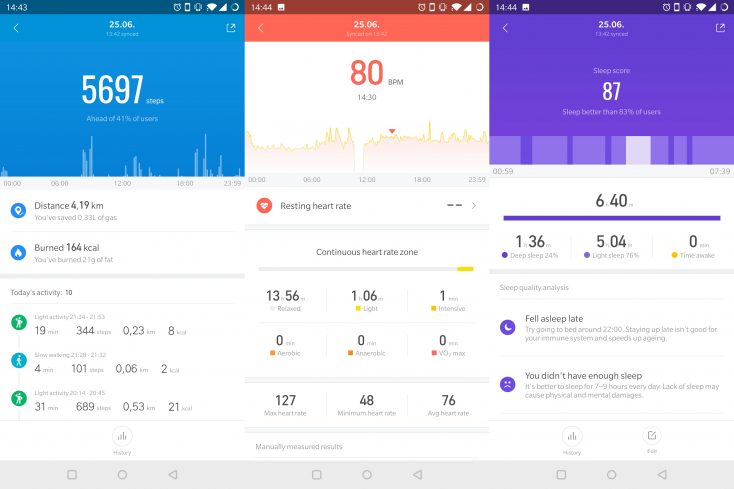 As mentioned above, there’s also a treadmill mode and a free workout mode, both of which work well without GPS. Interesting is the swim mode. This automatically locks the screen and you can set the lanes to 25 meters, 50 meters or any other. The Mi Band 4 shows time, distance, calories, moves and moves per minute while tracking, and after training the SWOLF value, speed (time per 100 meters), swimming style, and number of strokes per minute. But we have to test this a little bit more extensively.

In comparison with my privately used Honor Watch Magic (right screenshot) you can see small differences in the measured data. These can possibly be traced back to the missing GPS of the Mi Band. The difference can be seen in a 40 m shorter distance and in 17 steps less. We still have to measure this on longer distances, the current heat wave has put us through our paces so far, but this will be done later. 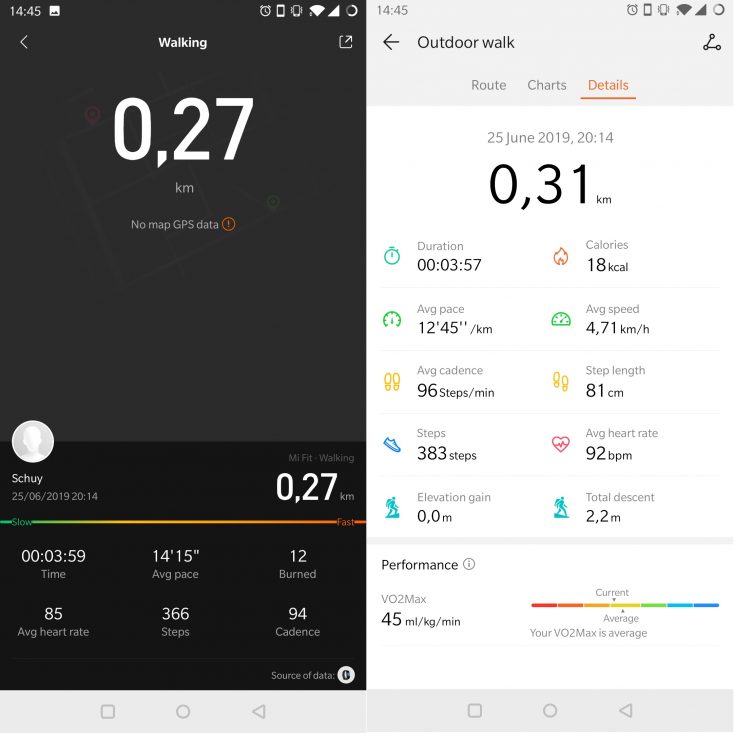 If you already own a Mi Band, you know it: the Mi Fit app (Download: Android | iOS). Some love it, some prefer third-party apps. The fact is, however, that the app is indispensable for setup and many settings. The app has recently been redesigned and welcomes us in a new design, which seems relatively clear to us. It looks the same on both Android and iOS devices and offers basically the same functionality. 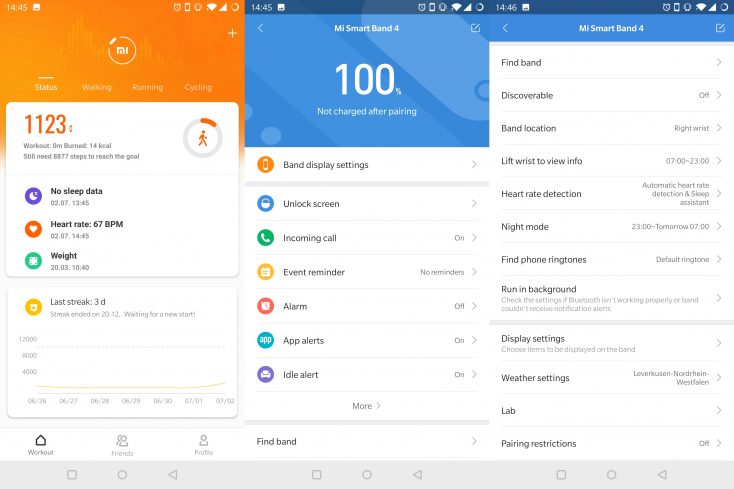 The Mi Fit app offers many watchfaces (over 50), but also many settings such as Smart Lock, calls, appointments, alarm, night mode, carry page, inactivity warning, lift to activate and more. There are also different detection methods for heart rate measurement, each of which of course uses a different amount of battery. 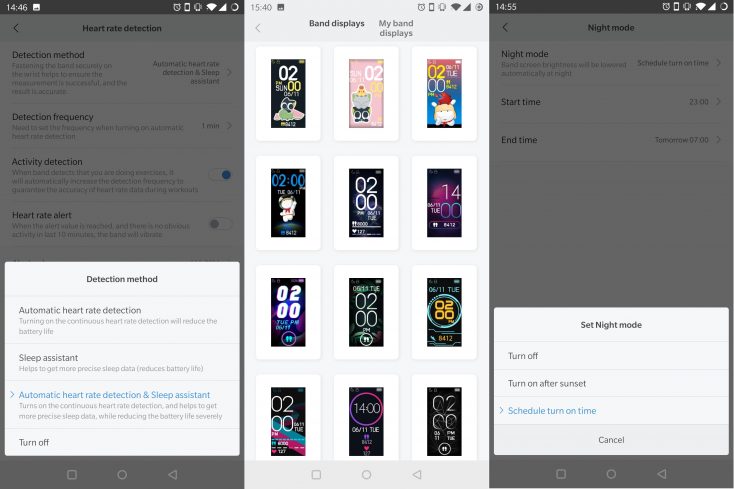 Of course, you can also set app notifications here, which are now displayed better than with the predecessors. This is due to the color display of the icon, e.g. green in WhatsApp, but also to the fact that even longer messages are well displayed. Due to the English language you have to do without umlauts and emojis.

Another new feature is that you can now create your own vibration pattern. The app also offers a “record” function: a touch on the screen is like vibrating, so you can record vibration melodies and use them for your notifications – very cool! Also new is the ability to protect the band with a PIN as soon as it is taken off the wrist. But this doesn’t work in practice yet – maybe it will be updated soon. 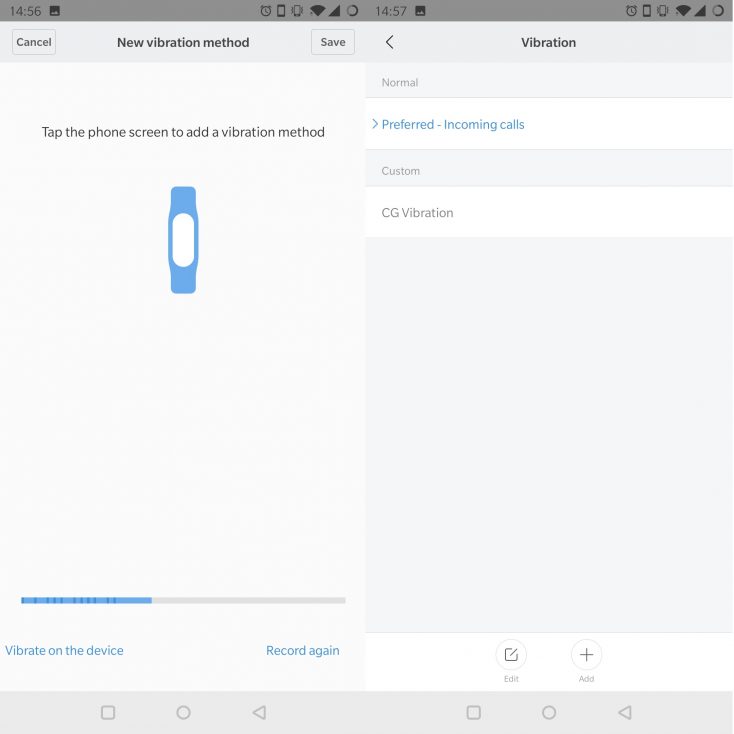 We still owe you some long-term experience regarding battery life and measurement data for running & swimming, but one thing we can already say: The Xiaomi Mi Band 4 makes it again and is probably the best fitness tracker in the affordable price segment! Our first impressions are really good, because especially the display is a highlight: bright and with color – finally! In addition there is the music control as a cool feature and a long awaited swim mode, which we only know from Honor Band 4.

Also the battery life seems to be able to follow up the glorious Xiaomi Mi Band 2, which lasted 3 weeks without any problems. But here we will update you in about one to two weeks – including running and swimming data. So far we are optimistic and can already recommend the Mi Band 4. However, we strongly recommend the Global Version, which also runs in English with a German mobile phone.

What do you think of Mi Band 4? Useful improvements or did you expect more?