2 Kommentare June 24, 2019by Thorben
Hey, guys! Just a heads up: The linked offer is already a bit older and the price of the gadget might have changed or it might not be available anymore.

So far it is only about leaks and unconfirmed information, but you can get an idea of the Mi CC9. Optically it will be very similar to the Xiaomi Mi 9, after all it’s an AMOLED display with a waterdrop notch. How many inches this should measure in the diagonal is not yet known, but about 6.4 inches would be conceivable. The fingerprint sensor should also be located under the panel in the display.

The Snapdragon 730 processor, which we know from the aforementioned Xiaomi Mi 9T, also sits inside. This is a new Octa-Core CPU with a lot of power, which is well equipped for all applications thanks to the 2.2 GHz clock frequency. The memory configurations may vary between 6/64 GB, 6/128 GB and 8/256 GB, but this has not yet been confirmed. Just like the 9T, the Mi CC9 should be equipped with a 4,000 mAh battery that can be charged with 27W.

The new Xiaomi smartphone should appeal especially to Selfie fans. With a 32 megapixel sensor, the resolution is improved and the Xiaomi Mi Mix 3 is likely to outperform the front camera quality. But wait and see. On the back there will probably be a 48 megapixel sensor; whether it will only be a dual camera or even a triple camera is not known.

Apparently there is also a slightly slimmed down version of the Xiaomi Mi CC9: the Xiaomi Mi CC9e. Similar to the Samsung Galaxy S10e, the aim is to appeal to the more price-conscious target group. According to unofficially published information, this should be equipped with a 6.3 inch LC display and thus do without the AMOLED technology. The fingerprint sensor moves from the display to the back. 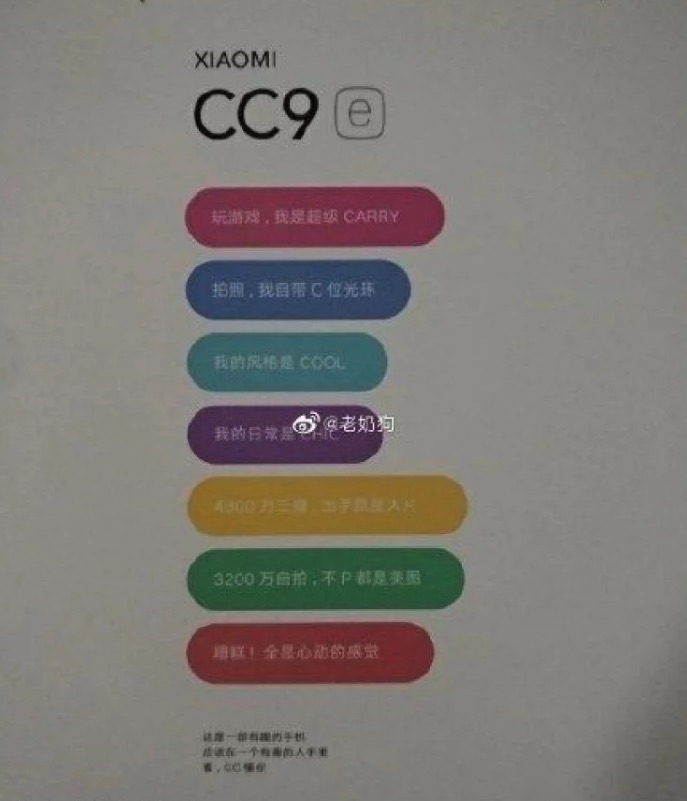 The CPU has to be cut back a bit: instead of the Snapdragon 730 the Snapdragon 710 or Snapdragon 712 is used, which also sits in the Xiaomi Mi 9 SE. Apparently, the camera configuration of the big brother is kept, only the charging power of the battery shrinks from 27W to 18W. However, both devices should be equipped with NFC, which would definitely be desirable.

However, this is pure speculation, but it would be conceivable of course. At the latest with the Xiaomi Mi 9T/Redmi K20, the company has shown that one does not necessarily act logically. We’ll see. What do you expect from the Xiaomi Mi CC9 and what do you think of the name?