0 Kommentare March 29, 2018 by Maike
Hey, guys! Just a heads up: The linked offer is already a bit older and the price of the gadget might have changed or it might not be available anymore.

The Xiaomi Mi Notebook Air 2018, in a new design and with the latest hardware, has just been released. Now, at the launch of the Xiaomi Mi MIX 2S, there was another surprising laptop innovation to marvel at. With the introduction of the Xiaomi Mi Gaming Notebook the manufacturer expands its laptop portfolio, we have summarized all details for you. 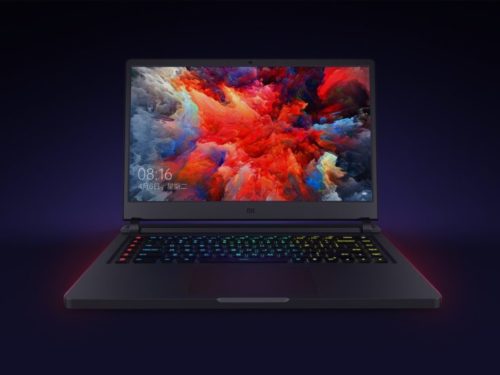 The design: Simple as always, but only at first glance

While gaming laptops from other manufacturers are very eye-catching in almost every case, Xiaomi takes a different approach. Xiaomi boss Lei Jun justified this, while introducing that, with the business unfitness of a gaming notebook, a businessman with such a notebook is (in China) not welcome and seems dubious. He’s not wrong, I also find the idea of a person in a suit who wants to sell me something and has his Razer or Alienware “spaceship” with him somehow strange.

But to transform the business notebook into the Xiaomi Mi Gaming notebook after work, the keyboard is divided into four areas, which are illuminated in different colours. In addition, there are case atomsphere LEDs, this underbody lighting illuminates the short side edges of the laptop and the table on which it stands – reminiscent a little of the cars from The Fast and the Furious: Tokyo Drift ?

The QWERTY keyboard features a total of six special keys, five of which can be individually programmed. The already defined special button is the tornado button, as Xiaomi Boss Lei Jun calls it, with which the maximum fan speed can be activated at the push of a button, thus lowering the temperature of CPU and GPU between 3°-5° within minutes.

The reason for the Tornado button quickly becomes clear when you look at the technical data of the laptop. As with the Xiaomi Mi Notebook Air 2018, there will be two versions of the Xiaomi Mi Gaming Notebook, we thought at least. Meanwhile four versions are available on the official Mi-site. At the heart of the strongest version beats an Intel i7 7700 HQ, which clocks at 2.8 to 3.7 GHz. It belongs to the 7th generation (Kaby-Lake-H architecture), has been on the market since 2017 and was manufactured with the improved 14nm+ process, whereby it clocks 200 MHz higher than its predecessor.

During the presentation of the Xiaomi Gaming notebook a comparison video to other laptops was recorded. Xiaomi’s model in the current blockbuster PUBG always scored ~100 FPS in different game sequences.

The smallest version comes with an NVIDIA GeForce GTX1050Ti with only 4GB DDR5 VRAM, 8GB RAM, 128GB SSD and a 1TB HDD drive. The processor of the smaller version was not addressed during the performance. However, we assume that it will be an Intel Core i5-7300 HQ (2.5 to 3.5 GHz).

With the introduction of the new gaming laptop it can be assumed that the Xiaomi Mi Notebook Air 2018 probably got improved ventilation only due to its development. During the performance it became clear that the Xiaomi Mi Gaming notebook paid special attention to these, because too hot components always mean a loss of performance, which Xiaomi absolutely wants to avoid.

So that the gaming laptop can breathe freely, a large mesh of stainless steel has been installed on the underside. This offers a 233.6cm² large influencing surface through which air can enter the interior.

Unlike the Xiaomi Mi Notebook Air 2018, warm air is not output between the screen and keyboard, but through both the back and the short sides. The fins of the two high-quality fans are made of metal and are connected to a total of five heatpipes, which mainly keep the processor and graphics card at a reasonable temperature level.

All in all, the ventilation system looks well thought-out, whereby many openings in the housing always mean that sooner or later dust will deposit. A shortcoming that you have to live with and which should not pose any problems by regularly cleaning the system.

The Xiaomi Mi Gaming Notebook offers the largest number of connection options ever available on a laptop from the Chinese manufacturer.

On the back there are

on the left-hand side

and on the right side

Especially the latter underlines once again the label gaming notebook, such connections are rarely found on other laptops. Besides the LAN socket, WLAN 802.11 a/b/g/n/ac is of course also on board, whether there is also a Bluetooth chip has not been mentioned so far, but is considered probable. Unlike the other Xiaomi laptop, the gaming notebook is not charged via USB-C cable, but via another power plug, which is also located on the back.

With the Xiaomi Mi Gaming notebook, the manufacturer lands a surprise that hardly anyone had expected, since rumors mostly revolved around the new Xiaomi Mi Mix 2S. But when you think about it, it only makes sense, here at China-Gadgets, too, there were always questions like: “can I render videos with it?”, “Can you play current games with it?” Now Xiaomi presents the solution with which this is certainly possible. As the other Xiaomi notebooks are simply designed, you won’t find a Mi logo on the back. Thus, it is quite suitable as a work notebook in industries where mobile, high-performance computers are needed. Thanks to the LED lighting, however, it becomes a real gaming notebook at the push of a button. In my opinion, Xiaomi has found a good compromise.