8 Kommentare February 2, 2019by Thorben
Hey, guys! Just a heads up: The linked offer is already a bit older and the price of the gadget might have changed or it might not be available anymore.

In 2019, there is one smartphone after the other from Xiaomi. Having just launched the subsidiary’s Redmi Note 7, the next highly anticipated successor is now coming. The new Xiaomi Mi Max 4 will be even bigger and get the same hardware upgrade as the Note 7.

The current Xiaomi Mi Max 3 is one of the largest smartphones on the market with a screen diagonal of 6.9 inches. With the Mi Max 4, Xiaomi would like to add one more and equips the new Phablet with a 7.2 inch display! This will be accordingly equipped with a Full HD+ resolution. However, for the first time a Notch display will be used, which is a novelty for the Max series. The fourth generation, however, probably uses a waterdrop notch like the Redmi Note 7, quite simply to save some case size.

In order to protect the huge display from a possible fall, Gorilla Glass 5 is also used, which is also used on the back, as it will probably be a glass back. The predecessor has an aluminium unibody.

Not only the design gets an upgrade, also the performance is raised to the next level. Like the Redmi Note 7, the Xiaomi Mi Max 4 is probably equipped with the Snapdragon 660 processor, an Octa-Core processor consisting of eight Kryo 260 cores, which clocks with up to 2.2 GHz. We already know it from the Mi 8 Lite or Mi Pad 4 and still like it very much. It plays in the upper middle class and supports current standards such as Bluetooth 5.0, Quick Charge 4 and AI functions. 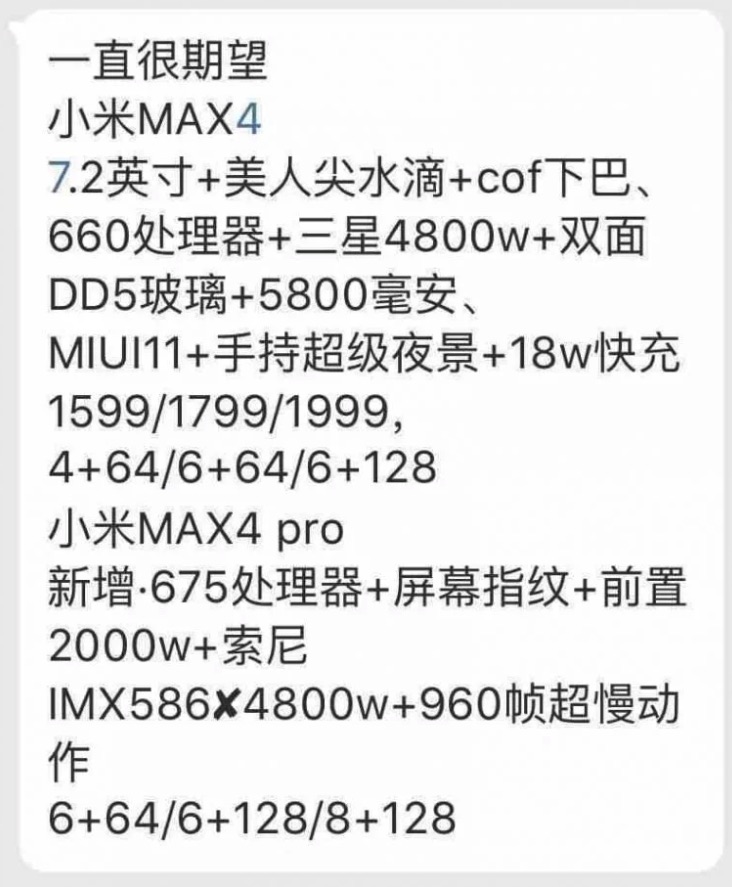 Depending on how much money you want to spend, you get either 4 GB RAM and 64 GB internal memory, or 6/64 GB or even 6/128 GB memory. The battery is relatively generous according to the large display. A battery capacity of 5,800 milliampere-hours should also provide a good two days of battery life for this device. It can be recharged relatively quickly with 18W Quick Charge 3.0, even if it should take a good three hours with such a large battery.

We’ve also recently got to know the camera sensor. The Mi Max 4 also has the Samsung ISOCELL GM1 with 48 megapixels, which takes good photos overall. First test photos can be found in our review of the Redmi Note 7. In addition there is probably a 5 megapixel sensor and a 13 megapixel sensor on the front.

Of course Xiaomi relies again on MIUI as operating system, which is probably already in its eleventh generation when the Mi Max 4 is released. This in turn is based on Android 9 Pie. Nice that the manufacturer goes here so with the time!

Mi Max 4 Pro: Is it coming this time?

Already with the Xiaomi Mi Max 3 a Pro version was announced, but never released. Apparently a Pro version of the Phablet could come this year. The improvements are mostly related to CPU and camera. Instead of the already good Snapdragon 660 the Snapdragon 675 will be used, which is still quite new and even faster than the Snapdragon 710 from the Mi 8 SE. The camera sensor is again based on 48 megapixels, but on the Sony IMX586, which we already know from Honor View 20. A second 20 megapixel sensor is also to be added.

Rumour has it that the Pro version even manages with a fingerprint scanner in the display, but we still dare to doubt that.

The leaked prices predict a starting price of about $240 for the smallest version, which should be reflected in an import shop of about $290. The Mi Max 3 is usually that expensive. For the bigger version, one is probably allowed to add approximately 30 to $40, so that for the biggest version, we probably have to add $360. Price leaks for the pro version are not yet available.

There is also no release date yet. The Max 3 was released at the end of July 2018. If Xiaomi sets to the six-month release rhythm again, the Max 4 could be introduced soon. At the end of the first quarter at the latest we should get more detailed information.

Let’s make it short: When the Xiaomi Mi Max 4 comes out like this, it’s basically just a big version of the Redmi Note 7. Same processor, same camera, same features, big battery and a similar design. Although these aren’t official features yet, these specs are more than realistic when you consider that the Mi Max 3 was basically just a big Redmi Note 5.

Would you buy such a big smartphone or would it be much too big for your pocket?