6 Kommentare August 10, 2021by Thorben
Hey, guys! Just a heads up: The linked offer is already a bit older and the price of the gadget might have changed or it might not be available anymore.

Hardly any phone has caused more speculation in the past years (!) than the Xiaomi Mi Mix 4. The Mix series was first temporarily ended, then resumed with the Mi Mix Fold, but we have been expecting a direct successor of the Xiaomi Mi Mix 3, which was released in 2018, for years. There were many rumors, but now the time has finally come: Xiaomi officially unveiled the Mi Mix 4 in China today! Have they created a unique smartphone once again? 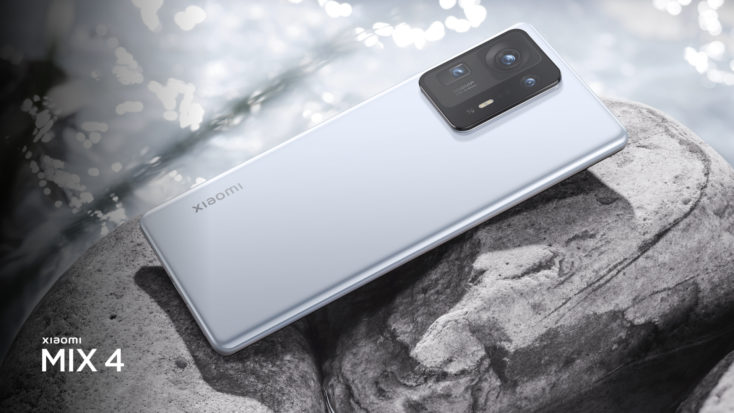 An important step towards bezel-less

Contrary to leaks that have surfaced in the meantime, the camera module is not located in the center of the back, but in the upper left corner. The camera bump is definitely big, even though the module cannot compete with the Mi 11 Ultra. The latter protrudes slightly from the casing, but even apart from that, the Mi Mix 4 is not quite as slim as hoped. At 8.22 mm in thickness, it has to concede defeat to a Vivo X60 Pro. The Xiaomi Mi Mix 4 seems to be available in three colors: black, white and dark silver. 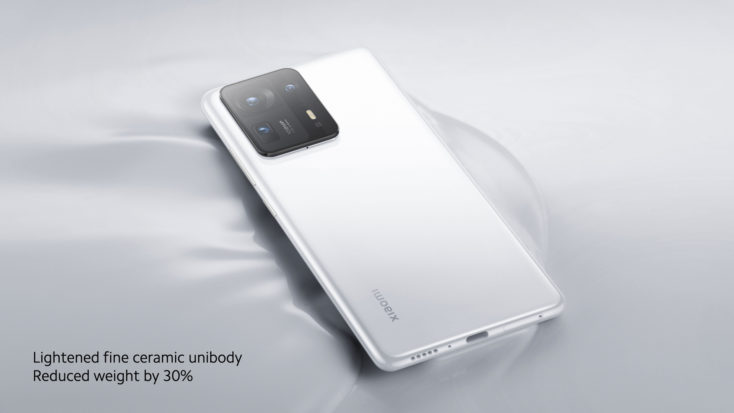 In return, Xiaomi puts a lot of emphasis on the design on the front. Especially on the screen edges that surround the display. Since a front-facing camera is placed below the display, the upper screen edge does not have to be larger. Thus, all four bezels on the front should be the same size, which definitely reminds us of the Xiaomi Mi Mix 3 with slider design. 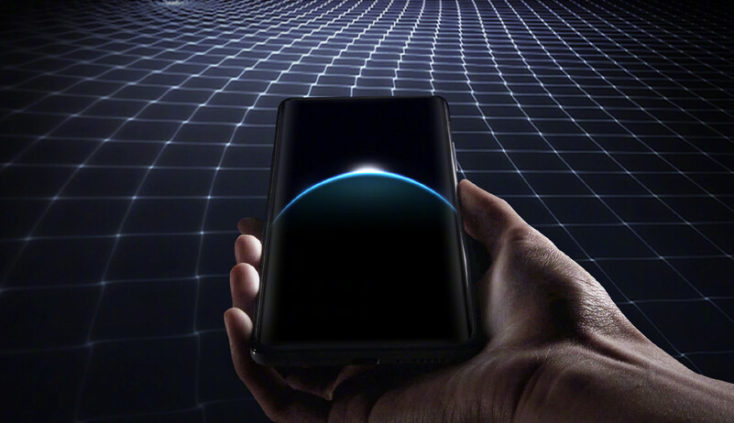 As per tradition in the Mix series, Xiaomi also uses ceramic instead of glass as the material for the unibody, which is rounded towards the sides. This is tradition, as ceramic backs have been an integral part of the series since the first Mi Mix in 2016. Nevertheless, there is still room for the power button and volume rocker on the right side. Even though Xiaomi calls it a “Lightweight” material, the weight is a hefty 225 g. That fits the Mi Mix series, because the Mi Mix 3 5G also weighed 225 g. 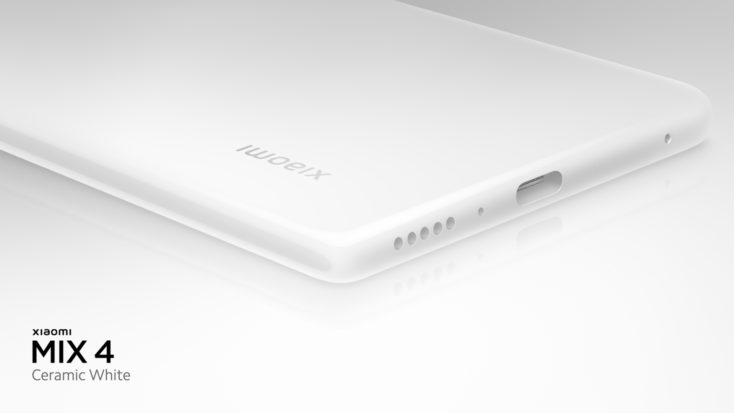 Xiaomi Mi Mix 4 with a front camera below the display!

The display is a 6.67-inch Full HD+ screen. The fact that a higher-resolution 1440P display like in the Mi 11 and Mi 11 Ultra is not installed is due to the fact that the Mi Mix 4 is Xiaomi’s first smartphone with an under-display camera! Similar to the now common in-display fingerprint sensor, a camera sits more or less invisibly under the display. 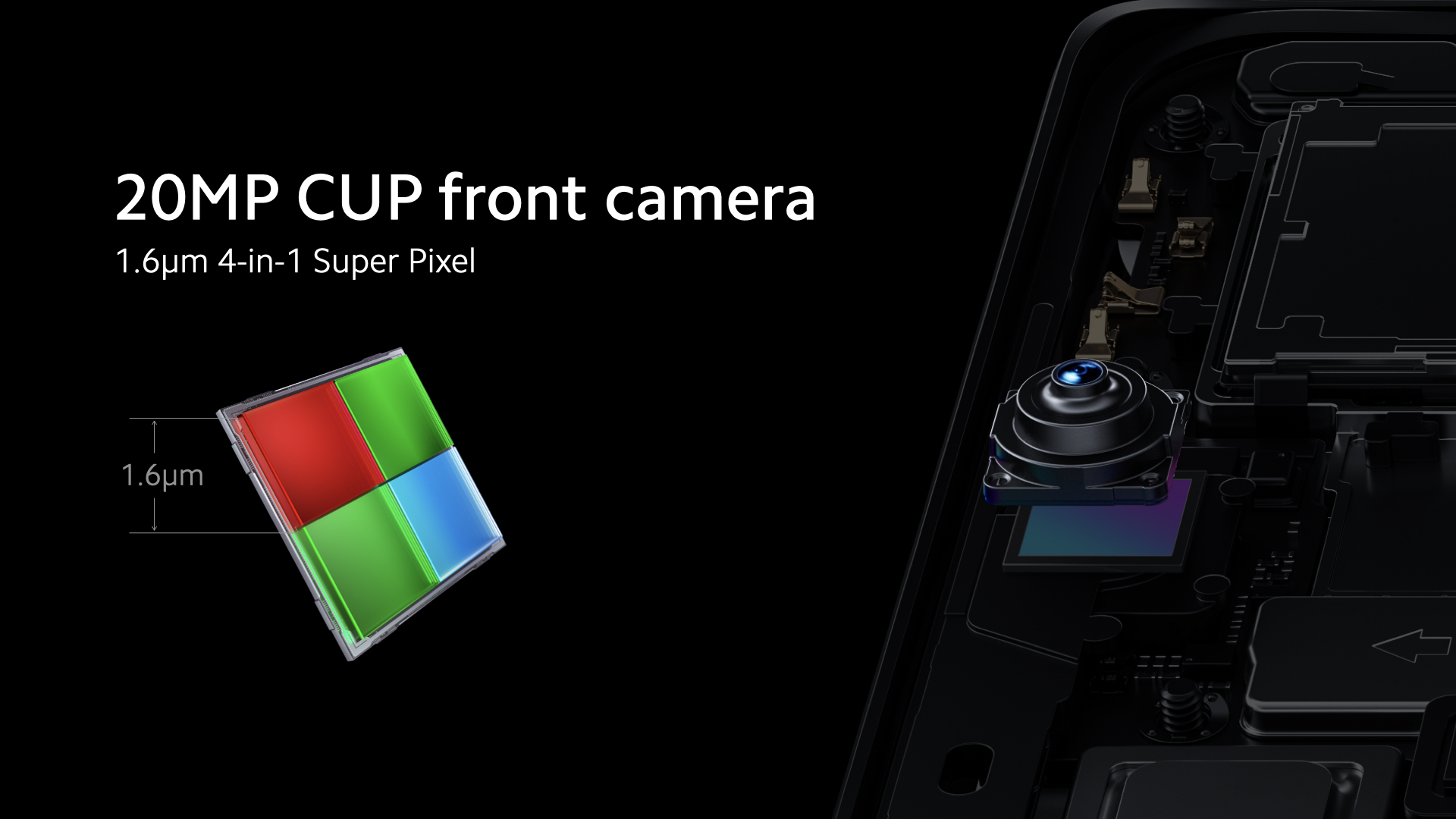 Since the camera has to take photos through the display and the pixels are “in the way” to a certain extent, a FullHD+ display with fewer pixels simply causes fewer problems here. We saw that an under-display camera is not easy to implement well last year in the ZTE Axon 20 5G, which was the first smartphone with the still very new technology.

Xiaomi itself  calls this technology in the Xiaomi Mi Mix 4 “CUP” display, which they have been working on since the first Xiaomi Mi Mix. “CUP” stands for Camera Under Panel and started with 200 ppi, in the current, third generation, Xiaomi increased the density to 400 ppi. According to the leaker Ice Universe, this is currently the best implemented technology of a front camera under the display (UDC). Xiaomi relies on a panel from China Star. The front camera offers a resolution of 20 megapixels. 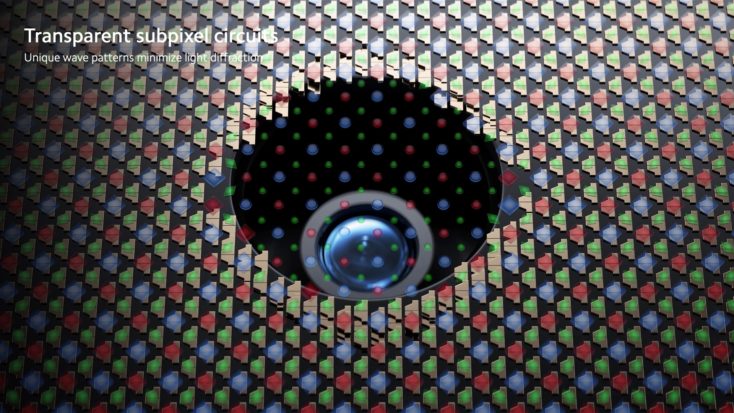 But the Mi Mix 4’s display also wants to convince apart from that. The 120 Hz AMOLED panel offers a 10-bit color depth, which allows it to display over one billion colors. The pixel density only results in an average 394 ppi, but there is a 480 Hz touch sampling rate, HDR10+ and Dolby Vision. The panel is slightly rounded towards the sides, but it is protected by Gorilla Glass Victus like the Xiaomi Mi 11. 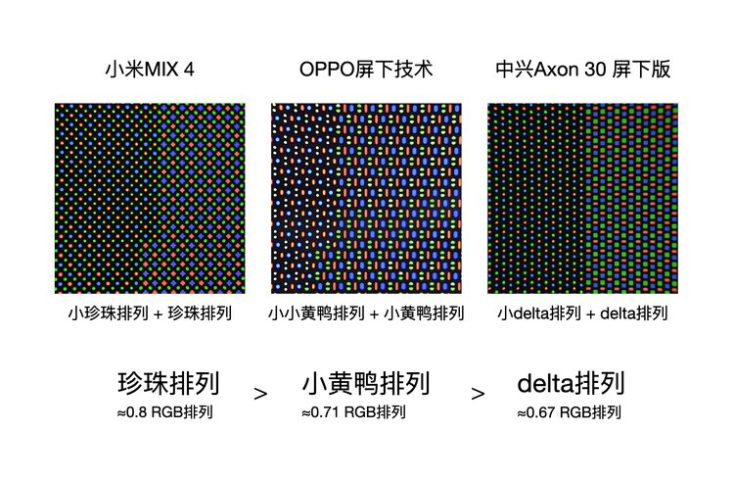 A slight spec bump in form of the new Qualcomm chip was already expected in advance. The Snapdragon 888+ processor is the latest flagship system on a chip (SoC) and offers a slightly higher clock rate than the Snapdragon 888 from the Mi 11. With a clock rate of 3 GHz, you are well-equipped for all tasks. After all, the Mi Mix always represents the maximum that Xiaomi can pack into a smartphone in terms of innovations. It is therefore only fitting that the currently strongest Qualcomm chip is installed. 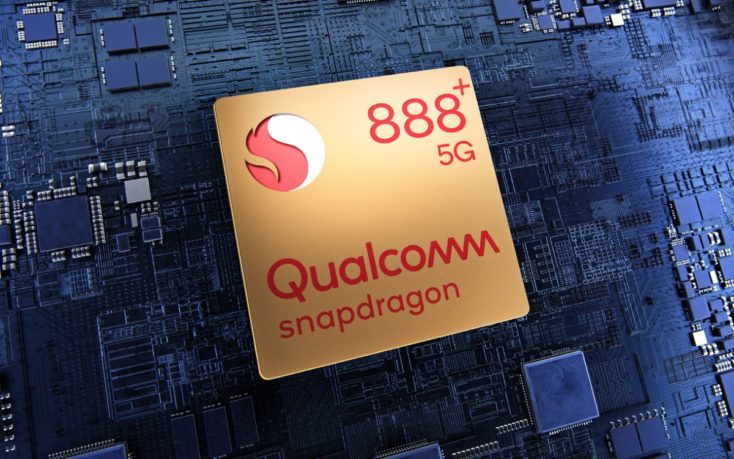 The performance is almost identical to the normal SD 888 despite the “+” in the name, as we already have discussed in our German podcast “China-Chat”. In addition, there is LPPDR5 working memory with 6400 Mbps speed and UFS 3.1 memory. The capacities have a minimum of 8 GB of RAM and 128 GB of mass storage. 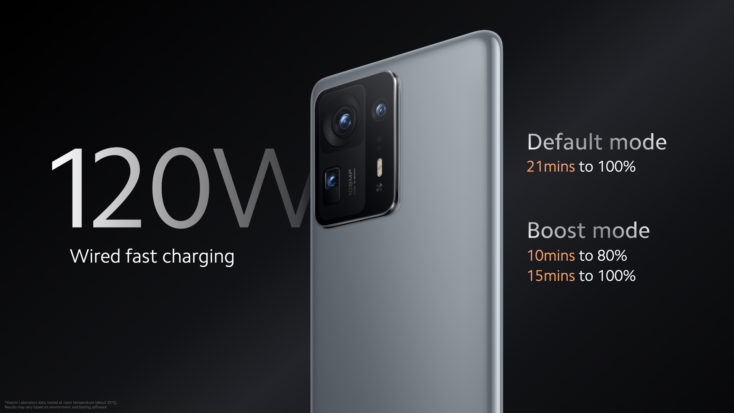 The battery is rather average with 4,5000 mAh, which is probably a compromise due to design decisions. In return, the new flagship smartphone can be charged with up to 120W! Thus, it charges as fast as the Xiaomi Mi 10 Ultra, a complete charge is supposed to take 21 minutes! Those who want to charge without a cable can still charge the Mi Mix 4 wirelessly with 50W. That is a bit surprising, since the Xiaomi Mi 11 Ultra could already be charged wirelessly with 67W. However, if a global version of the Mix 4 is released, it is questionable whether the 120W will also be possible. This feature had to be dropped on the Red Magic 6 Pro, for example. 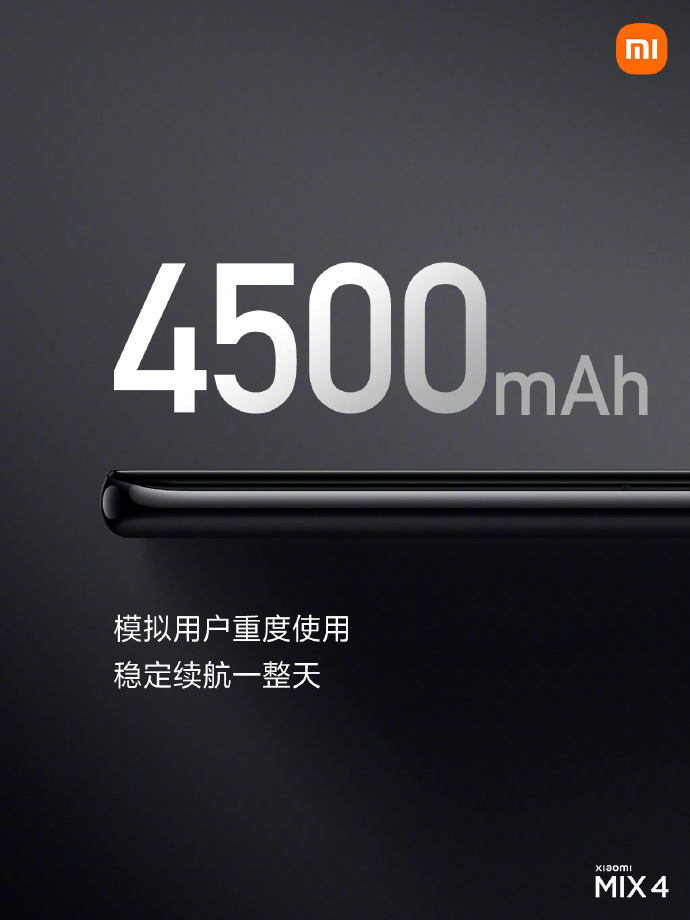 Surprisingly, the Xiaomi Mi Mix 4, like the Mi Mix Fold, uses the familiar 108-megapixel Samsung ISOCELL HMX1 sensor with a focal length equivalent of 24 mm. The sensor is not only found in the Fold, but also in the Xiaomi Mi 11. Some leakers in advance and also we would have rather expected the Samsung GN2 sensor, which was developed in close cooperation with Samsung and can also be found in the Xiaomi Mi 11 Pro. However, the large 108 MP sensor offers optical image stabilization, which is especially useful for low-light shots. 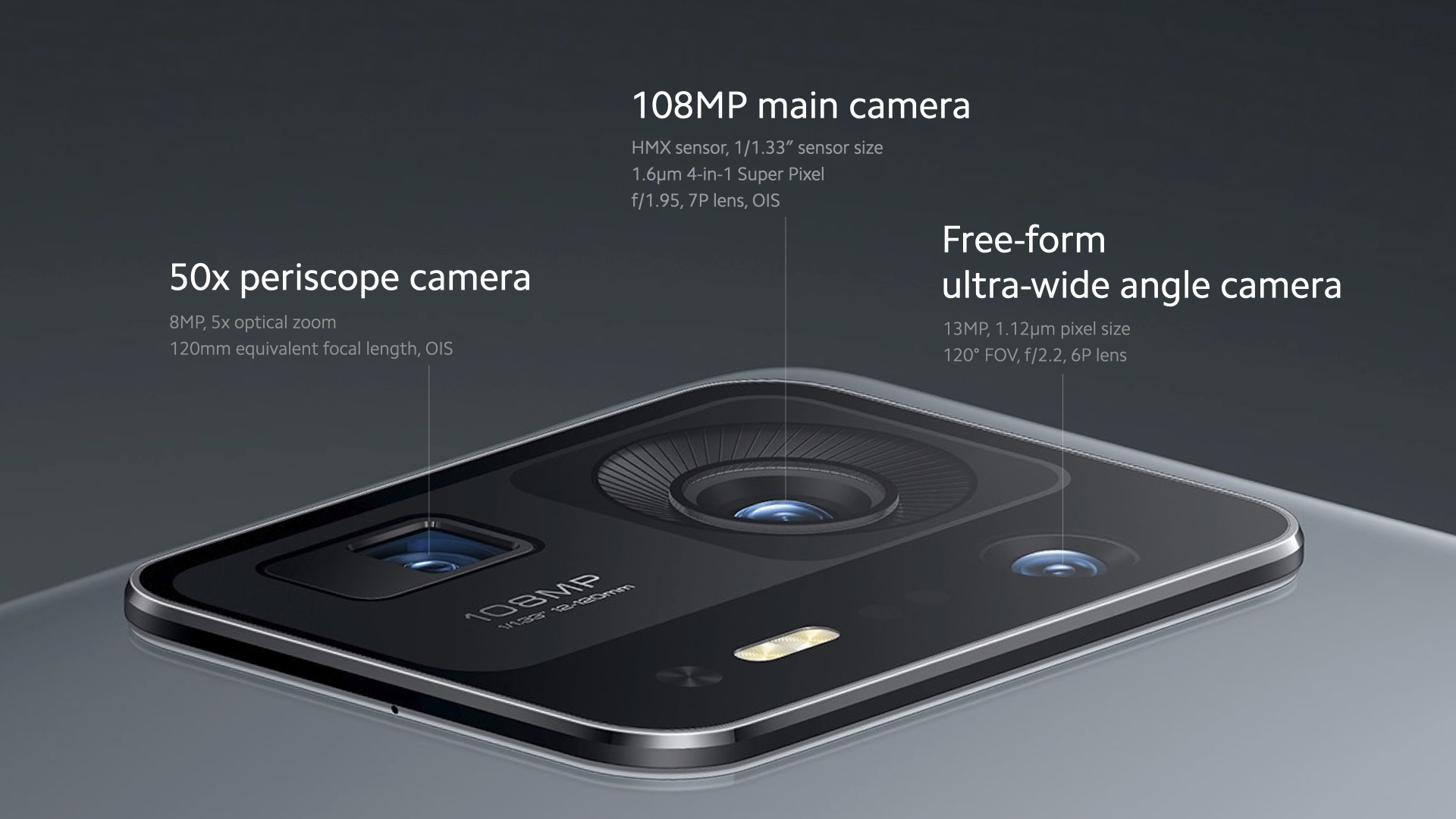 In addition, there are “only” two more sensors to complete the triple camera. The 13-megapixel ultra-wide-angle camera offers a 120° shooting angle and a 6P lens. The focal length is 12 meters. However, there is also a zoom thanks to the periscope camera. The 8 megapixel sensor allows a 5x optical magnification, thus coming to 120 mm and is also equipped with optical image stabilization. Thus, we have similar equipment as in the Xiaomi Mi Mix Fold. 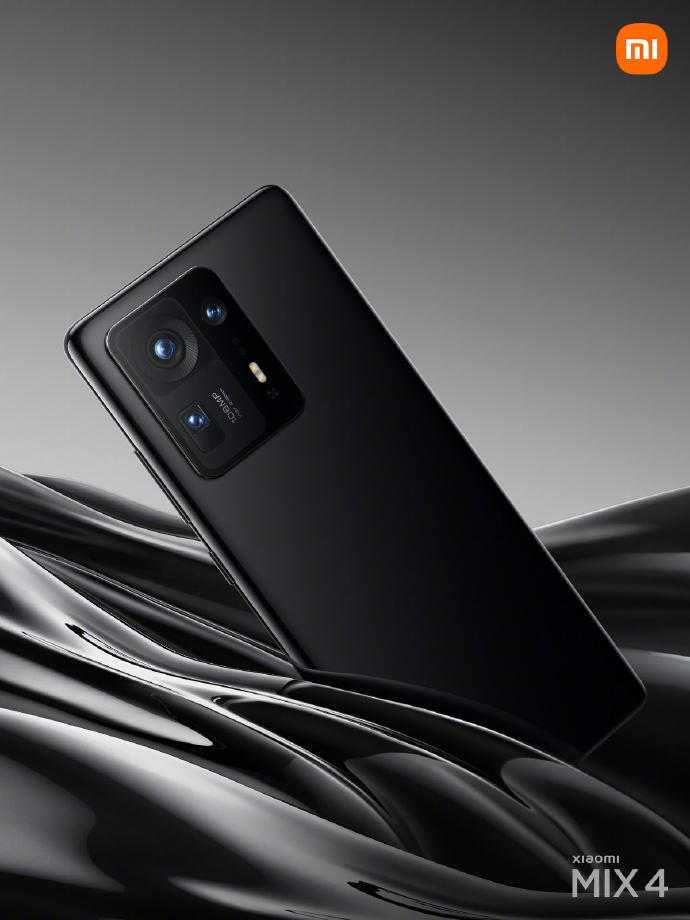 The front camera under the display on the front offers a resolution of 20 megapixels. However, the sensor interestingly also works with 4-in-1 pixel binning, so four pixels are combined into one and you effectively get 5 MP photos. It will mainly depend on how Xiaomi optimizes the software and what kind of algorithm is at work to get the photos sharp “through” the pixels of the display. This worked only mediocre on the ZTE Axon 20 5G, as photos were a bit blurry and milky. We have yet to test how good the selfies will be aside from Xiaomi’s marketing promises.

The Xiaomi Mi Mix 4 comes preloaded with the latest MIUI 12.5 operating system, which is based on Android 11. Since it is only launched in China so far, the OS can only be used in English or Chinese. A multilingual interface would only follow with a global release, which has not been announced yet. Also, nothing about LTE and 5G is known at the moment.

In contrast, stereo speakers from Harman Kardon, an X-axis vibration motor, NFC, the latest Bluetooth, WiFi and dual GPS are standard. UWB, on the other hand, is new. The Xiaomi Mi Mix 4 is the first Xiaomi smartphone that supports ultra-wideband (UWB). The iPhone 11 or the S21 Ultra are already ahead of Xiaomi in this respect. This technology is supposed to complement NFC, WiFi 6 & Bluetooth and, for example, ensures that you can unlock your car with your phone.

How expensive is the Xiaomi Mi Mix 4 and when will it be released?

The Xiaomi Mi Mix 4 has only been launched in China so far and is not quite as expensive as initially assumed. The cheapest 8/128 GB version costs 4999 yuan, which is equivalent to about $771. For twice as much mass storage you pay the equivalent of just under $820 and the maximum configuration with 12 GB RAM and 512 GB storage is the equivalent of just under $975. The Xiaomi Mi Mix 4 will be released in China on August 16, 2021. 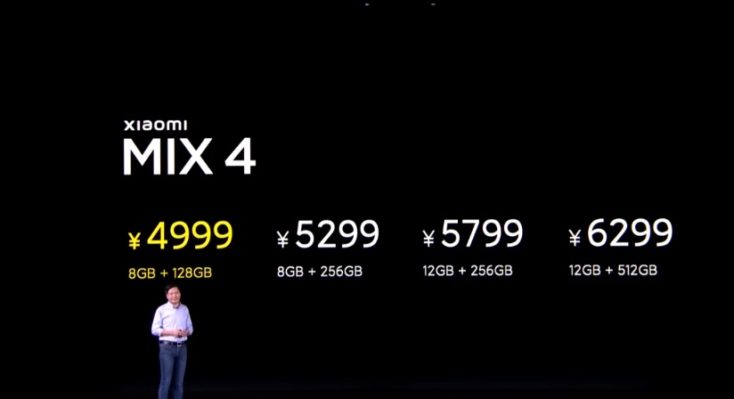 Since a global version for the Western market has not been unveiled yet, we can only speculate about possible prices. Since it is cheaper than the Xiaomi Mi 11 Ultra in China, we also expect it to settle between the Mi 11 and Ultra and end up at around $1170. However, these are only speculations so far.

So here it is at last! We’ve been waiting a long time for the Xiaomi Mi Mix 4, however, we also expected Xiaomi to wait this long until they could really take the next big step. And that is of course the front-facing camera under the display, which we expect a lot from, as it could be the benchmark for this technology. But aside from that, you also get interesting specs. Snapdragon 888+, 120W charging, UWB and a 120 Hz AMOLED display. Only with the camera, we honestly hoped for something more than the main sensor that we already know.

What do you think about the Mi Mix 4 and the under-display camera? We are definitely curious to see how well Xiaomi could develop the technology.