7 Kommentare September 24, 2019by Thorben
Hey, guys! Just a heads up: The linked offer is already a bit older and the price of the gadget might have changed or it might not be available anymore.
We’ve waited a long time for this, now Xiaomi has finally introduced the new Xiaomi Mi Mix Alpha smartphone. It’s equipped with a surround display that goes once completely around the smartphone, achieving a screen-to-body ratio of 180.6% – wow! This is the first smartphone of its kind! As proud as the Chinese are of this concept, so proud is the price. The concept smartphone costs over $2749! 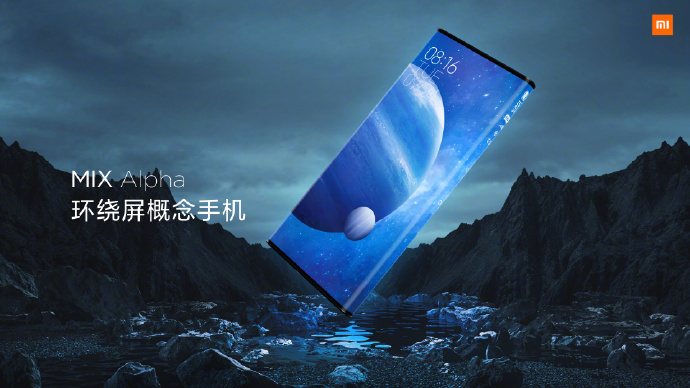 The Xiaomi Mi Mix series has been attracting media attention since its first generation. This was the first time that a “rimless” smartphone was mentioned and the Xiaomi Mi Mix 3 brought the slider back. After our fact check we finally introduced the Xiaomi Mi Mix Alpha, which is based on a completely new design! 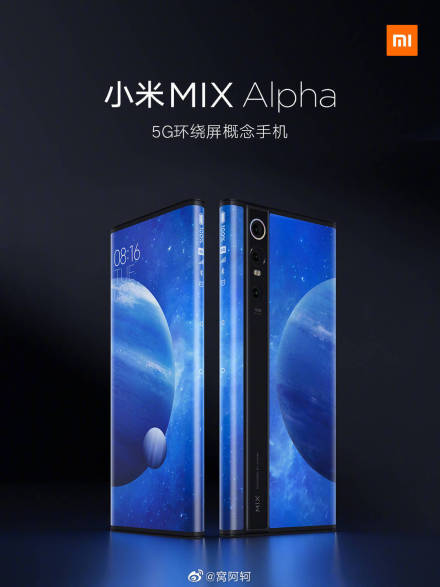 While we thought that the Vivo NEX 3 would achieve a high screen-to-body ratio with the Waterfall screen, the Xiaomi Mi Mix Alpha sets new standards. The Mi Mix Alpha’s new surround display goes completely around the smartphone and achieves a 180.6 % screen-to-body ratio. The screen occupies almost the entire front, then goes around both sides and is only interrupted by a relatively thin “strip” on which the camera is placed. There’s no such thing yet, because unlike a dual-display smartphone like the Nubia Z20, it’s only a screen. The display diagonal is 7.92″ and offers a resolution of 2088 x 2250 pixels. This results in a pixel density of 388 ppi. Of course, the manufacturer uses a flexible OLED panel, which is bent in two places. We remember the foldable smartphone that Xiaomi introduced to the social media at the beginning of 2019. In the meantime it has been assumed that the Mi Mix Alpha is the foldable smartphone. The panel is of course protected by glass. The lower edge of the screen is only 2.15 mm thick, which is probably the top value among Android smartphones. 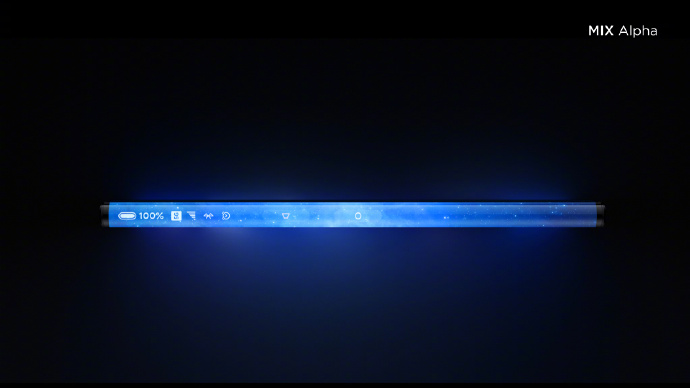 Since Xiaomi doesn’t use a traditional case frame here, the keys like the power button are integrated into the two “side displays” via software. For example, if you want to adjust the volume, you can simply slide up on the side. There are also the status symobles and notifications like the reception quality or the battery level. Two problems are the position of the antennas in the frame and the arbitrary pressing of buttons. However, Xiaomi probably came up with solutions for this that were not discussed in detail. Only on the upper side there is a physical button that probably serves as an emergency power button. 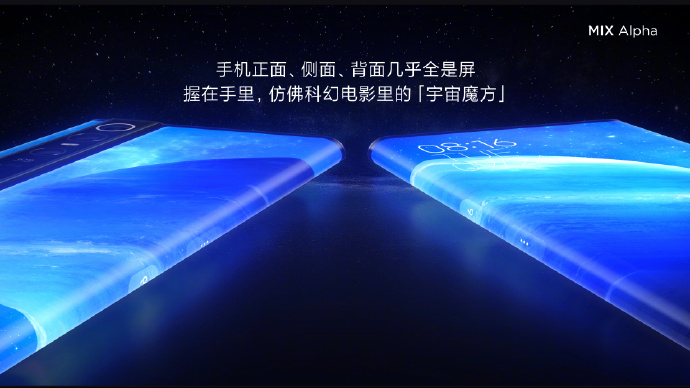 How stable the whole smartphone is, of course, is more than questionable. It’s not for nothing that Xiaomi describes the Mi Mix Alpha as a concept smartphone. Nevertheless, Xiaomi relies on high-quality materials, Xiaomi titanium alloy is used for the top and bottom of the frame and the triple camera is protected with Sapphire glass.

It was quite clear in advance that the Xiaomi Mi Mix Alpha would be equipped with the new Qualcomm Snapdragon 855+ processor. This CPU is basically only a slightly higher clocked version of the Snapdragon 855, which already sits in the Xiaomi Mi 9. The Plus version is supposed to deliver up to 15% more performance, especially in the graphics area, so gamers get their money’s worth here.

In addition there is a lot of memory like in the Xiaomi Mi 9 Pro. But Xiaomi uses 12 GB LPPDR4X RAM and actually even 512 GB internal memory. Fortunately, the new UFS 3.0 standard, which for example is also used in the OnePlus 7 Pro, is used.

The Mi Mix series is known for its chic design, but definitely not for its battery life. Even though there was talk of a larger battery in advance, the new Xiaomi Mi Mix Alpha has a 4,050 mAh battery in the end. For such a large display, this actually seems somewhat undersized. At least you can rely on the good energy management of the MIUI operating system.

As in the Xiaomi Mi 9 Pro, the battery can be charged with a fast 40 watts. Especially the charging animation is a little highlight, because of the surround display the Mix Alpha imitates a battery that is charged. Due to the 3D effect it looks really futuristic. Due to the special design of the Mi Mix Alpha you have to do without wireless charging and reverse charging.

Apropos MIUI: The new MIUI 11 operating system was introduced at the same time as the two new smartphones. For the Mi Alpha there is a special form of it, namely MIUI Alpha. Due to the special hardware, functions for the back display were integrated as well as the software button, which we mentioned above. The back can also function as a kind of widget area.

The Xiaomi Mi Mix 2S finally lifted Xiaomi’s camera qualities to a new level at the end of 2017, the Mi Mix 3 has consistently continued this development. After the Redmi Note 8 Pro with a 64 megapixel main sensor, Xiaomi is now even more powerful. The Xiaomi Mi Mix Alpha is equipped with a 108 Megapixel camera! The resolution is 12032 x 9024 pixels – that’s the maximum number of pixels in a smartphone at the moment. 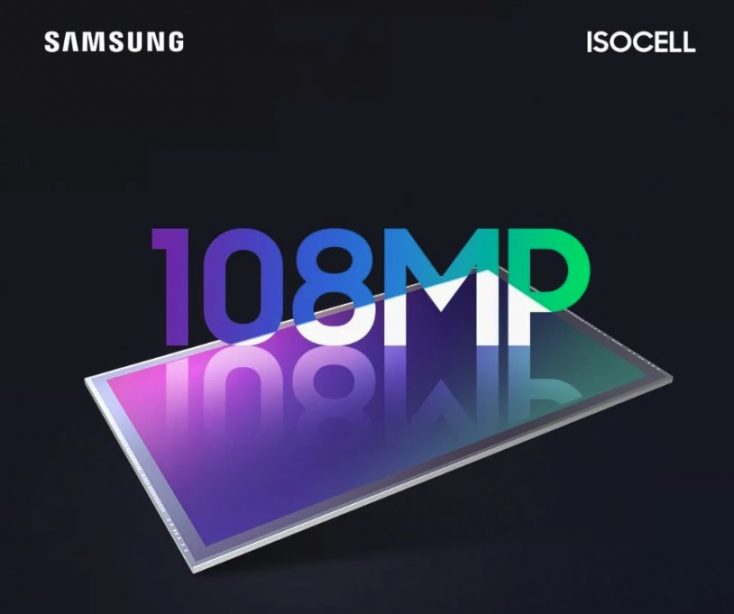 At the “Xiaomi Future Image Technology Communication Meeting” the new 64 MP sensor for the RN8 Pro was presented, but a 108 MP sensor was already teased on. The sensor was actually introduced in mid-August and comes from Samsung. The Samsung ISOCELL Bright HMX is designed to produce extremely sharp photos and capture more light, allowing it to shine in low-light situations. Four pixels are then combined with each other using pixel binning technology, so that the final photos have 27 megapixels. 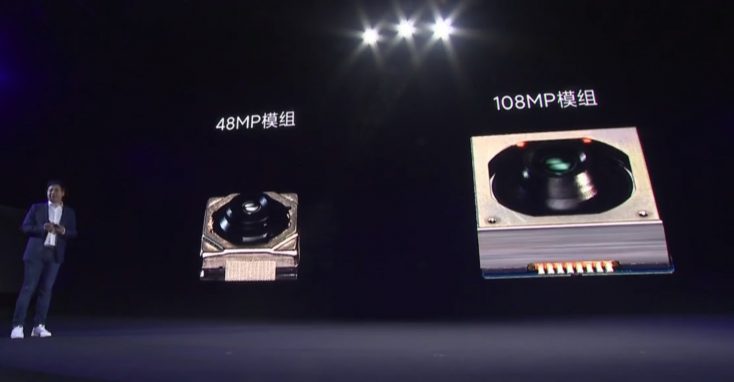 All in all, Xiaomi uses “only” three cameras, i.e. two additional sensors in addition to the 108 MP sensor. In addition, there is a 20 megapixel ultra-wide angle camera on the back with a shooting angle of 117°, which can probably also be used as a macro camera. For more distant objects there is also another 12 megapixel sensor with a ƒ/2.0 aperture and 2x optical zoom. 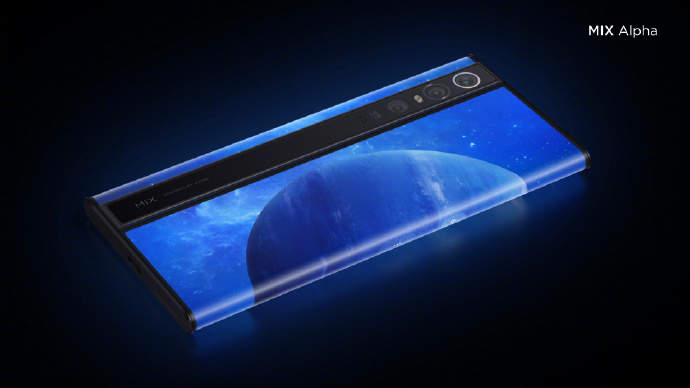 5G is the future, Xiaomi knows that too. After the Xiaomi Mi Mix 3 5G they also introduced the Xiaomi Mi 9 Pro (5G), a 5G version of their current flagship. So it wouldn’t be surprising if the Xiaomi Mi Mix Alpha is also equipped with 5G. For local internet 802.11 a/b/g/n/ac Dual Band WiFi is available, besides 5G there is also LTE. In addition there is Bluetooth 5.0. 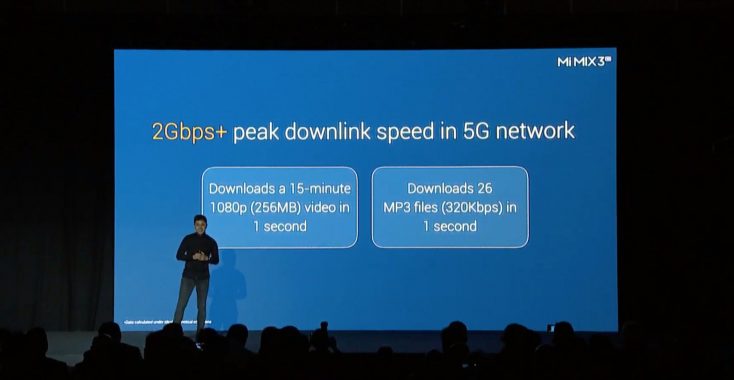 Wow – the Xiaomi Mi Mix Alpha is actually a concept smartphone. Xiaomi proves that you can play at the top and that you can easily keep up with Apple and Samsung. But the Mi Mix Alpha is not suitable for the masses, so it costs 19.999 Yuan, which is more than $2749! Is this what the future looks like? Possibly, but mass production is probably not yet feasible. Anyway, it is a completely new and independent design and a mixture of a foldable display and a dual display.

Apart from the price – what do you think of this concept? Is it future-proof?