0 Kommentare May 6, 2020by Thorben
Hey, guys! Just a heads up: The linked offer is already a bit older and the price of the gadget might have changed or it might not be available anymore.

In addition to the Redmi Note 9 and the Redmi Note 9 Pro, the Xiaomi Mi Note 10 Lite was officially introduced on April 30th. The Global Version will be released in May and starts at a price of $379. Do you like the new Colorway? 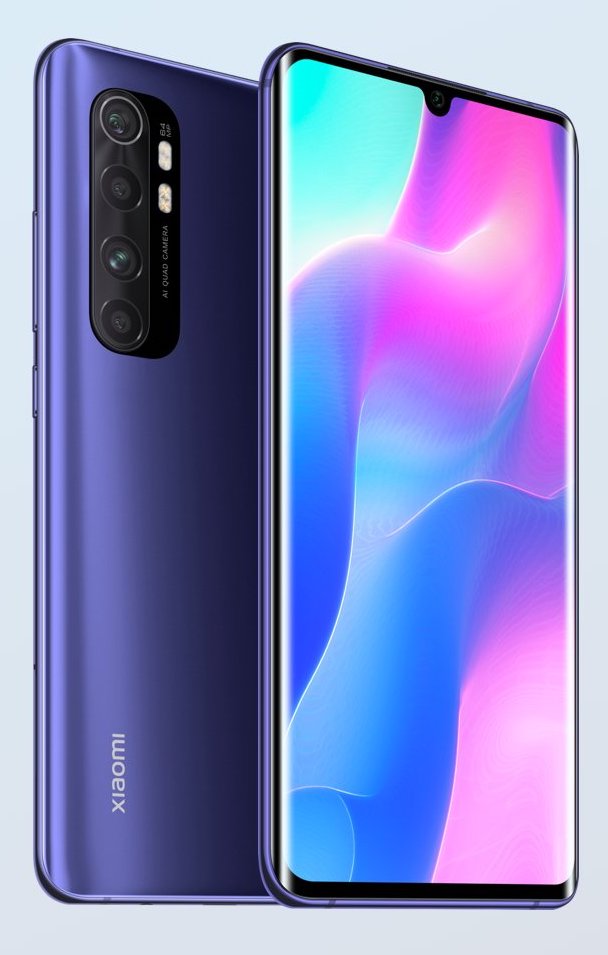 Same design as the Mi Note 10

The Mi Note 10 Lite is the same size as the normal Mi Note 10 thanks to a 6.47″ display diagonal. The panel has a FullHD+ resolution and is blessed with a fingerprint sensor in the display, so it’s also an AMOLED display. As in the normal Mi Note 10, the manufacturer has chosen a curved display, which offers a brightness of up to 600 nit. 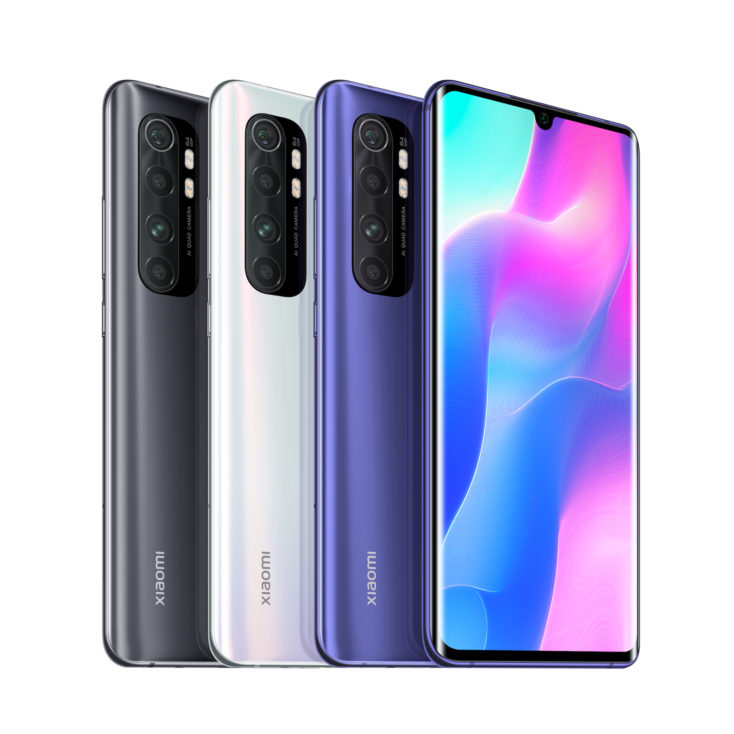 There are differences on the back. The number of cameras shrinks from five to four, but all sensors are arranged vertically one below the other. Xiaomi also dedicates an entirely new Colorway to the Mi Note series: Nebula Purple. That looks pretty good because of the slightly matt look. There’s also Midnight Black and Interstellar White. Both the front and back are equipped with Gorilla Glass 5.

We also get the familiar fare inside: The Qualcomm Snapdragon 730G is also the engine in the Mi Note 10, which thus offers a good performance especially for a Lite variant. In addition, there is a choice of 6 GB LPDDR4X RAM and 64 or 128 GB UFS 2.1 mass storage, which can’t be expanded via microSD card, though. Here one must therefore decide before the purchase. 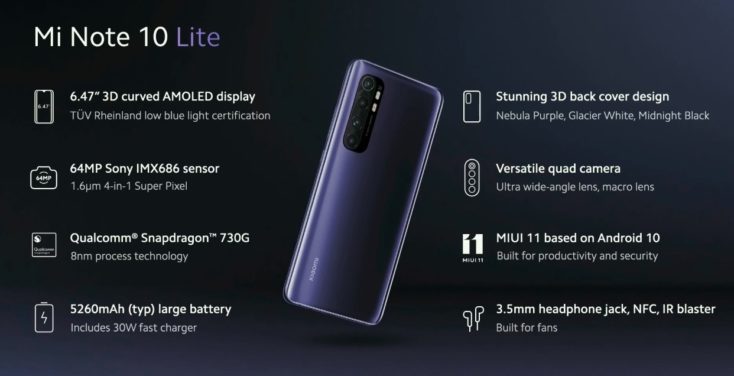 But the new camera is especially interesting. Instead of the 108 megapixel sensor, which was a bit too much for the Snapdragon 730G, the Sony IMX686 was chosen. In our opinion, this is a very good choice. The 64 MP sensor has already produced sharp photos in the Redmi K30 and should work well here, too. You have to make concessions with the other sensors for this. An 8 MP ultra wide angle camera, a 5 MP depth sensor and a 2 MP macro camera are now standard. On the front there is a 16 megapixel camera.

With 5,260 mAh, the battery turns out to be just as big as the normal Mi Note 10 and Mi Note 10 Pro. In addition, the Mi Note 10 Lite 10 supports 30W fast charging, the corresponding charger is included. Wireless charging is still not possible.

The pre-installed MIUI 11 operating system is based on Android 10, and the Mi Note 10 Lite fulfills almost all the additional features of an upper class device: Dual-SIM, Dual Band ac-WiFi, NFC, Bluetooth 5, USB Type-C and a jack plug. As this is a global release, the most important LTE bands are of course also pre-installed.

As you may have noticed, I wasn’t a big fan of the Xiaomi Mi Note 10. The camera variety was decent, but the 108 MP main sensor isn’t suitable for a mid-range device and didn’t convince all along the line. Xiaomi now erases this “mistake”, integrates the good Sony sensor, doesn’t do much else and can lower the price.

What do you think of the Mi Note 10 Lite?