2 Kommentare August 11, 2021by Thorben
Hey, guys! Just a heads up: The linked offer is already a bit older and the price of the gadget might have changed or it might not be available anymore.

Ever since Xiaomi CEO Lei Jun announced at the beginning of the year that a new Xiaomi tablet would be released this year, the rumor mill has been bubbling. Now, Lei Jun has finally unveiled the Xiaomi Mi Pad 5. Next to the Mi Mix 4, it is probably one of the most anticipated Xiaomi gadgets. But will it also come to Amerika? 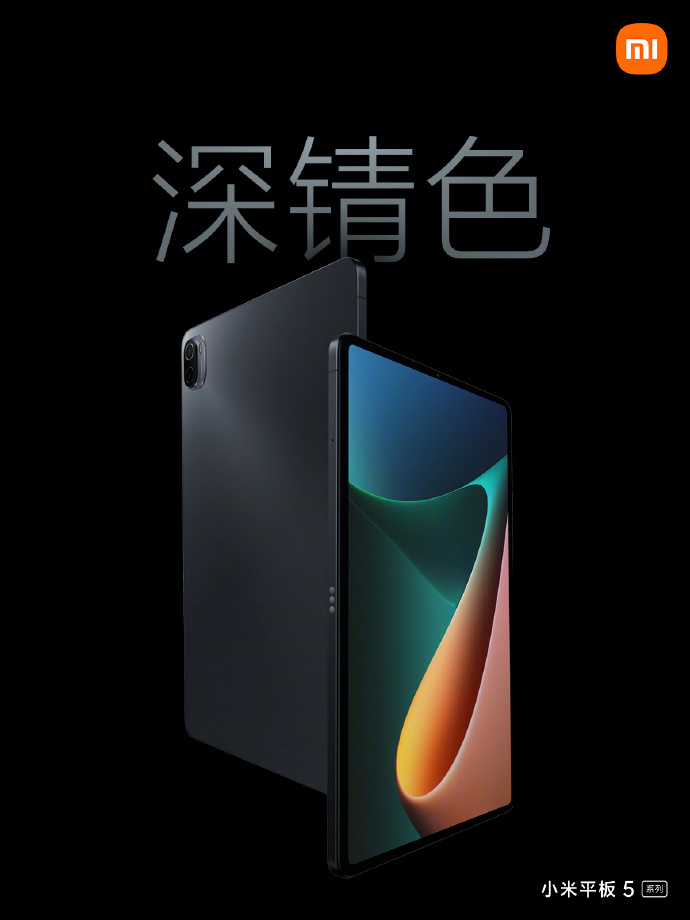 Just like the last Xiaomi Mi Pad 4, there are two different versions of the new Xiaomi tablet. Instead of a Plus version, they are now releasing another Xiaomi Mi Pad 5 Pro. The Pro version uses the Qualcomm Snapdragon 870 processor, while the Mi Pad 5 is powered by the Snapdragon 860. In addition, only the Xiaomi Mi Pad 5 Pro is equipped with the fast 67W charging, while 33W charging is supposed to be sufficient in the cheaper Mi Pad 5. In addition, only the Pro version has eight integrated speakers instead of the usual four in the Mi Pad 5. The Mi Pad 5 Pro is also available in a 5G version and a Wi-Fi version. 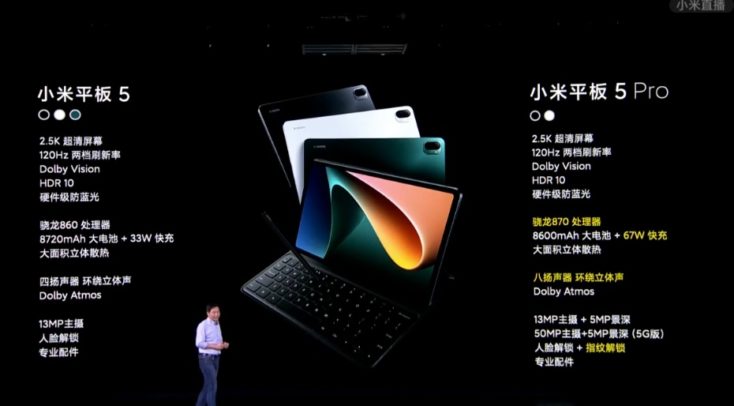 Apparently, Apple has succeeded in creating a blueprint for tablets, because the similarity to the iPad cannot be denied in the Mi Pad – apart from the name. The Xiaomi Mi Pad 5 also relies on an angular design with rounded corners, just like the new Honor V7 Pro. Only the back and front are slightly curved. The camera module can be seen on the top left of the back, which matches the design language of the current Xiaomi devices. The Xiaomi logo can also be found at the bottom left. 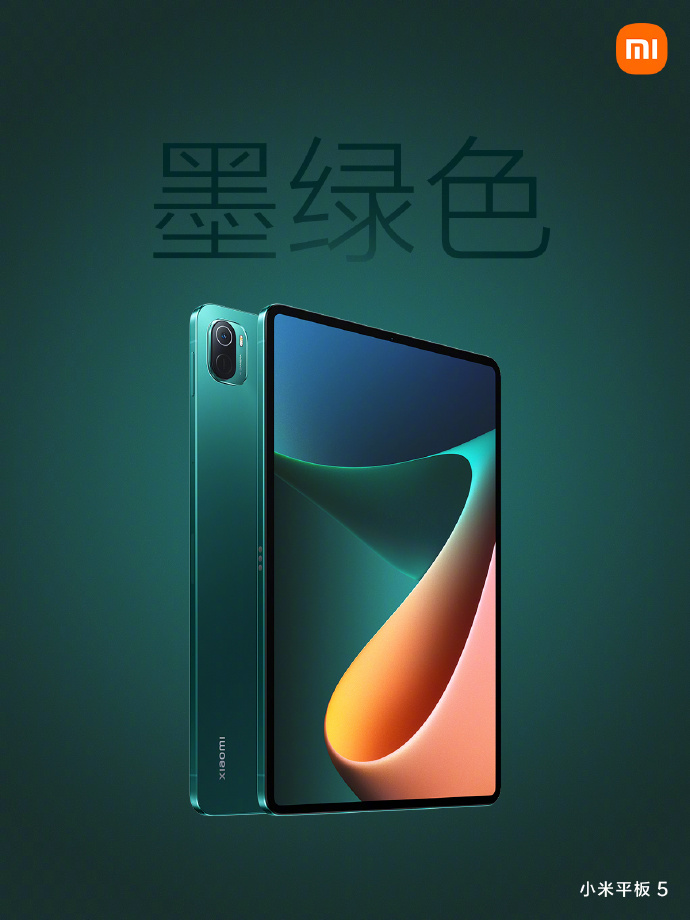 However, the main focus is on the display. The 10.95-inch IPS LC display is unfortunately not an AMOLED display. This is also on par with Apple. The resolution is 2560 x 1600 pixels, which results in a pixel density of 275 ppi. Xiaomi presents several versions of the Mi Pad 5, but the display panel is the same in all three versions. The display offers a brightness of 500 nit and TrueTone, but the contrast ratio is only 1500:1. 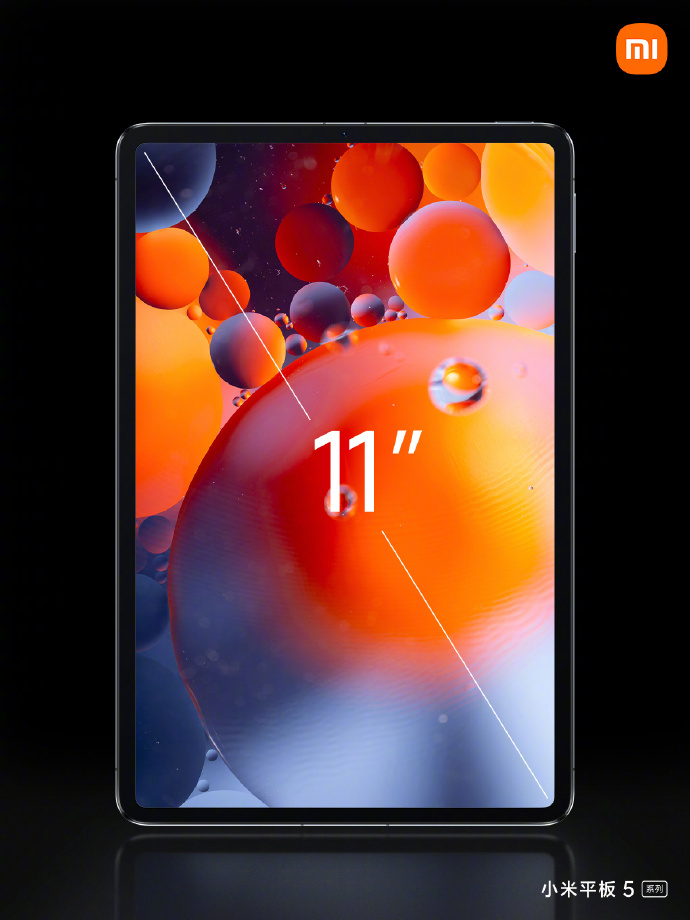 The first teasers also showed antenna stripes on the side, which indicates that Xiaomi relies on a metal build. Xiaomi has also installed the fingerprint sensor in the metal frame, but it cannot be placed under the display due to the LCD panel. Both Mi Pad 5 tablets break the 500g barrier and end up at 511 and 515 g, respectively. The thickness is considerably small at 6.86 mm. The Mi Pad 5 is available in black, white and green, while the Mi Pad 5 Pro is only available in black and white. 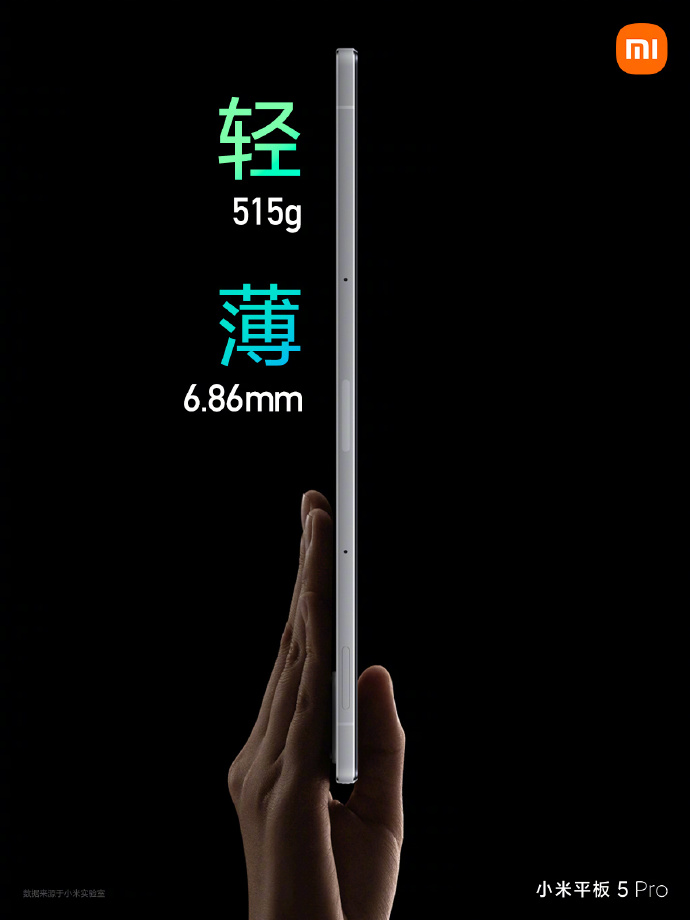 Depending on the version, Xiaomi installs a different processor. Only the Xiaomi Mi Pad 5 Pro uses the Qualcomm Snapdragon 870 processor, which is also found in the POCO F3, for example. Since it is the new edition of the Snapdragon 865, a former flagship processor, we get a very good performance here. The performance of the budget model is a bit lower due to the Qualcomm Snapdragon 860. However, the chip that we already tested in the POCO X3 Pro is also still very strong and should also be sufficient for all office tasks and gaming. 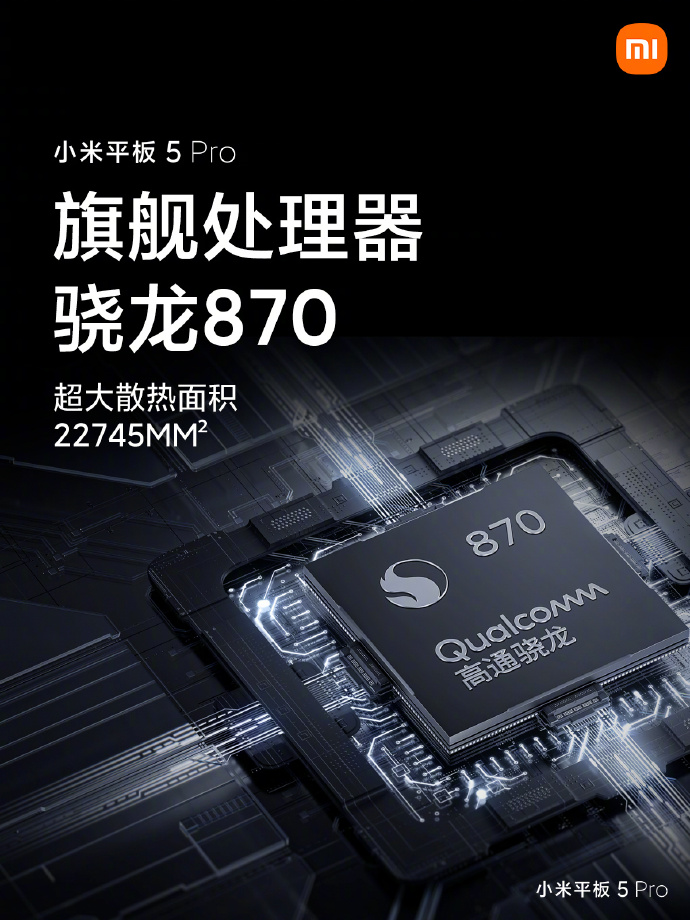 As you would expect from Xiaomi, the battery capacity is above average, but slightly different. Xiaomi’s Mi Pad 5 is equipped with an 8720 mAh battery, but only 33 W fast charging. The more expensive Xiaomi Mi Pad 5 Pro gets an 8600 mAh battery and even supports 67W charging like the Xiaomi Mi 11 Ultra. A corresponding charger is included in the scope of delivery. 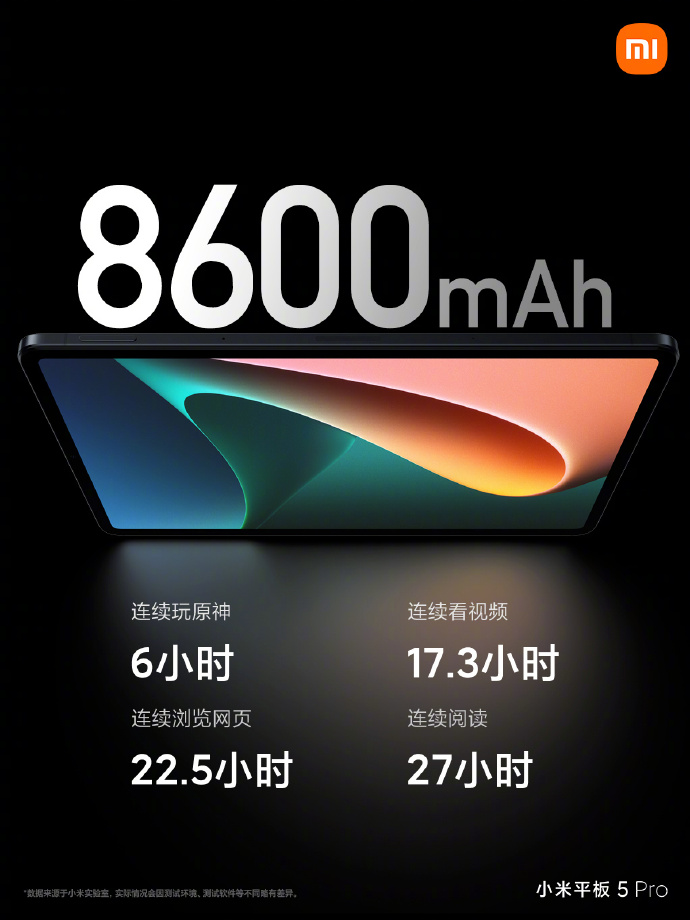 The first photos already showed a glimpse of the revised MIUI operating system for the Mi Pad, called MIUI for Pad. A dock similar to the iPad OS can be seen at the bottom. Finally, the smartphone operating system has been adapted to the larger aspect ratio, with multitasking in particular playing an important role. Since the Mi Pad 5 has only been released in China so far, MIUI for Pad can only be used in English and Chinese and only supports Google services via post-installation. 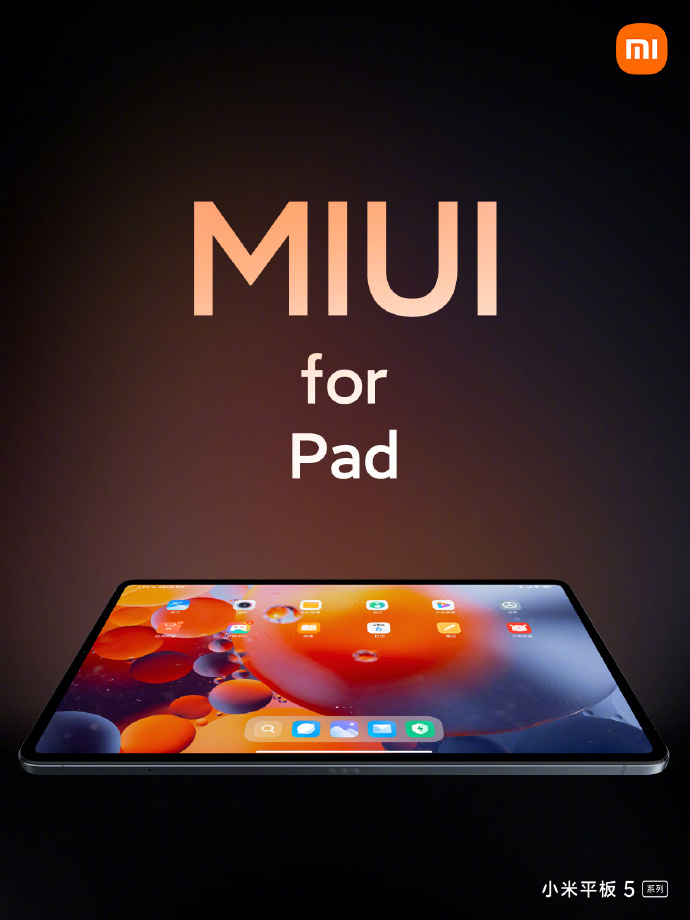 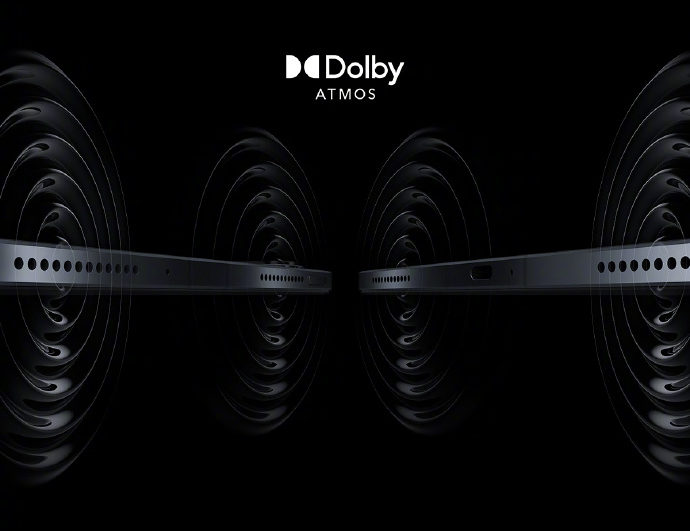 The manufacturer has also presented the right accessories for the Xiaomi Mi Pad 5, so that the tablet can also be used as a notebook replacement in case of need. This is a magnetic keyboard case, similar to Apple’s Magic Keyboard, which is available in different colors. The keyboard case also offers space for a stylus underneath the tablet. The stylus is even attached magnetically. The stylus connects magnetically to the Mi Pad 5 and charges wirelessly. There is also a protective case, which is also available in different colors. 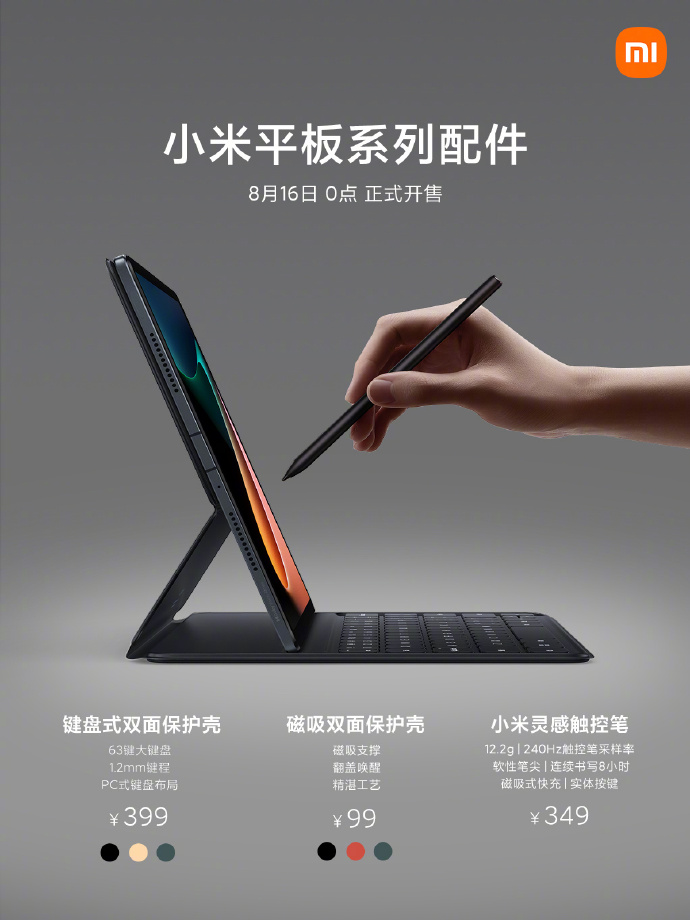 How much does the Xiaomi Mi Pad 5 Pro cost and when will it be released?

The accessories for the Xiaomi Mi Pad 5 and Mi Pad 5 Pro are of course cheaper. The keyboard cover costs the equivalent of just under 52€, only the case without the keyboard costs only 13€. The stylus, on the other hand, costs 349 yuan, which is just under 47€.

The Xiaomi Mi Pad 5 was hotly anticipated and now that it’s been unveiled, we can’t wait for it even less. After all, with a 120 Hz display, a strong Qualcomm processor, up to eight speakers, matching accessories and up to 67W charging, both versions sound very exciting. The big question remains: Will it also come to America? The predecessor could not be released globally, and the signs are not particularly good for the successor either. Unlike the Xiaomi Mi Mix 4, Xiaomi Global has not tweeted about it, for example. Nevertheless, it could also be interesting as an import for this price, similar to the Lenovo XiaoXin Pad Pro.

Have your wishes for the new Xiaomi Mi Pad 5 and Mi Pad 5 Pro been fulfilled?