0 Kommentare March 30, 2021by Tim
Hey, guys! Just a heads up: The linked offer is already a bit older and the price of the gadget might have changed or it might not be available anymore.

Xiaomi’s mega launch event clearly focuses on smartphones like the Mi 11 Ultra, but smart home products are also presented. In addition to a washing machine, the Chinese tech giant Xiaomi also teased a new robot vacuum cleaner in advance. Here you can read what the new 3D model is all about. 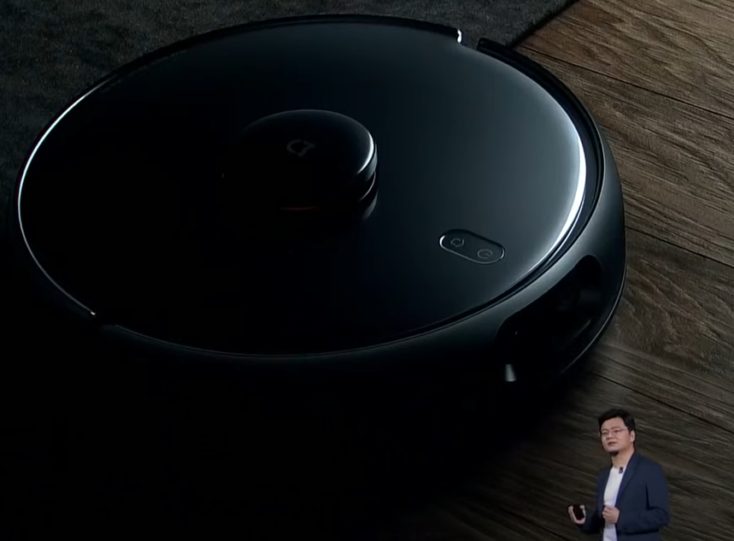 Why did Xiaomi advertise with this picture, where you could hardly see anything yet?

Because what you could already see reveals the most exciting factors. The typical Xiaomi laser turret on the top includes a laser distance sensor (LDS), which is what the new robot will mainly use to navigate. This is combined with the novel 3D obstacle detection, as shown by the two lenses below.

3D obstacle detection is currently the most technically exciting technology in vacuum robotics since the Deebot Ozmo T8. Qihoo 360 will soon follow suit with the S10, and Xiaomi already has a robot with 3D detection on the market with the Mi Robot Vacuum Mop 2 Pro+. However, this did not convince us in the test, especially not compared to the state of the art at Ecovacs. Now Xiaomi attacks again in this sector.

LDS-3D combination allows the Mi Robot to navigate optimally in theory. The LDS scans the space around it, and the camera lenses (which don’t take photos or videos) take care of everything the LDS can’t detect. As there are cables, socks, shoes, chair legs, the bathroom scale, etc.

Through its camera lenses, the new Xiaomi flagship model is said to be able to dodge carpets if you have attached the wipe function on the bottom.

But that’s not all: unlike all previous models, the robot can not only independently divide rooms and draw them on the virtual map, but even distinguish between the different types of rooms! For example, it can recognize a bed as a bed and then knows that it is in the bedroom. He marks this accordingly by means of an icon on the map.

It is still unclear when the round household helper will be available for purchase in this country. However, it will most likely be released here as well. In China, the robot will cost 2999 yuan at launch, which is ~390€/$456. We can expect more here. It depends on how well the 3D recognition works now. First field reports will have to show this. If it is very sophisticated, the price is absolutely justified. However, if it is rather poor, as already the case with the Mop 2 Pro+, no one will be overjoyed.

The potential is definitely there, now it depends on the implementation. What is your first impression? We will keep you updated here as soon as there is news.