3 Kommentare August 30, 2019 by Maike
Hey, guys! Just a heads up: The linked offer is already a bit older and the price of the gadget might have changed or it might not be available anymore.
Even though the Xiaomi Mi Robot 1S has already been released and tested by us, the first generation of the Xiaomi Mi Robot vacuum robot is still an extremely good vacuum robot.

The Xiaomi Mi Vacuum Robot has been on the market since August 2016 and our expectations are, as always at Xiaomi, correspondingly high. (Almost) everything was done right – this is shown in our test over a very long period of time. 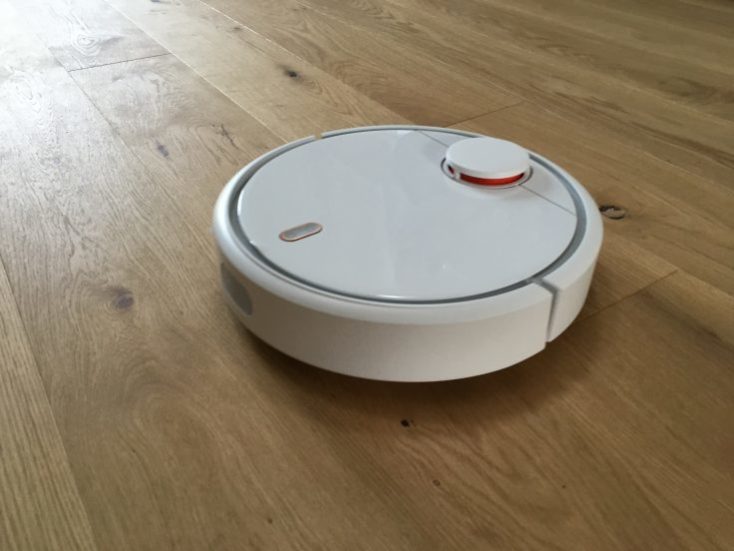 The RoboRock S50 is the stronger, but more expensive successor of the Mi Robot. If you can’t decide between the two models, this table gives you an overview:

The processing actually already includes the packaging. A dented, simple grey package is certainly no fun to unpack and Xiaomi knows that too. The “Apple from China” also places great value on a completely harmonious product with the robot vacuum cleaner – including packaging. GearBest was so kind and sent us a test copy once.

Safe, beautiful and simply packaged, the gadget comes to you. Included are:

Everything is kept in a simple white and looks very valuable. Also with a closer look and pleased touching: Nothing wobbles, solid workmanship, a light LED glow – once again top processed.

The cable can also be exchanged for an EU version, so you don’t need a bulky adapter. Maybe a spare rotor brush and a virtual wall would have been nice, but the future must show that. By the way: You don’t need a virtual wall (including battery), but rather a discreet adhesive strip on the floor. Nice thinking, Xiaomi. I especially like that you can roll up the cable in the base station and lead it out on both sides.

Don’t get me wrong, that’s no killer advantage, but if you spend a lot of money on a vacuum robot, which also costs more because of its design, I don’t want to have an ugly docking station and cables flying around (over which the robot might drive).

The Xiaomi Mi Vacuum Robot does not boast about various suction modes – it starts and stops them automatically. If you start the vacuum robot manually by app or on the vacuum cleaner robot or by time programming, the robot proceeds as follows:

This makes it fun to watch the vacuum cleaner at work. Of course, you can also make some settings:

Of course, the Chinese voice output is a bit confusing at the start, usually you don’t understand anything. Similar to my former Italian-speaking LG HomBot, one has to hope for resourceful inventors who can feed the robot other language files.

What immediately stands out: The robot drives through the apartment much more purposefully, not as you know it from the low-cost models of ILIFE, but rather e.g. from the HomBot series of LG or the Roombas – both series we could already test and had a lot of fun with the reprogramming of the HomBots (C3PO-Sounds – yay! :D).

But wait… isn’t there another Xiaomi app? Doesn’t Xiaomi want to network everything smart? Weren’t there cruel, partially translated menus in the past? So first off to the AppStore and download the Mi Home App!

The App Mi Home is available for Android at Google Play, as well as for iOS (Apple) at iTunes. Now comes the big BUT: the iOS app gets 2 stars in 206 reviews across all versions, the Android app doesn’t get away much better with 3.1 of 5 stars in 2759 reviews either. Why? We’ll show that now. By the way: Windows, Blackberry and other Stone Age operating systems are not supported. Here we go:

I made you some screenshots: 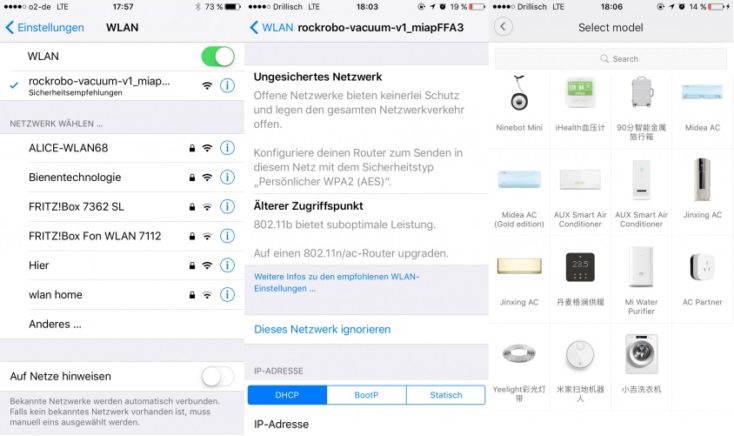 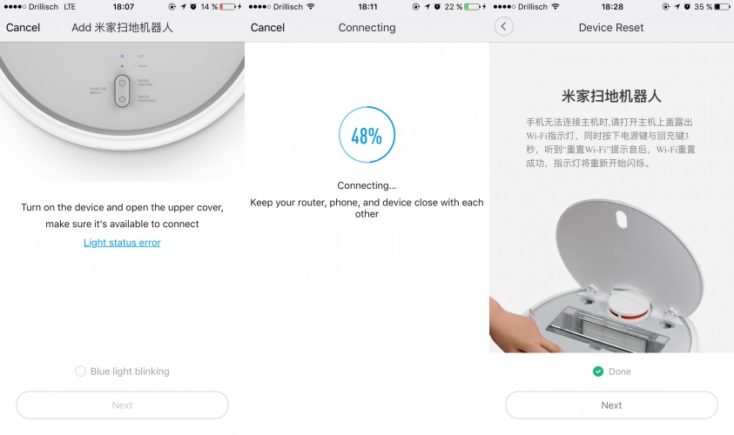 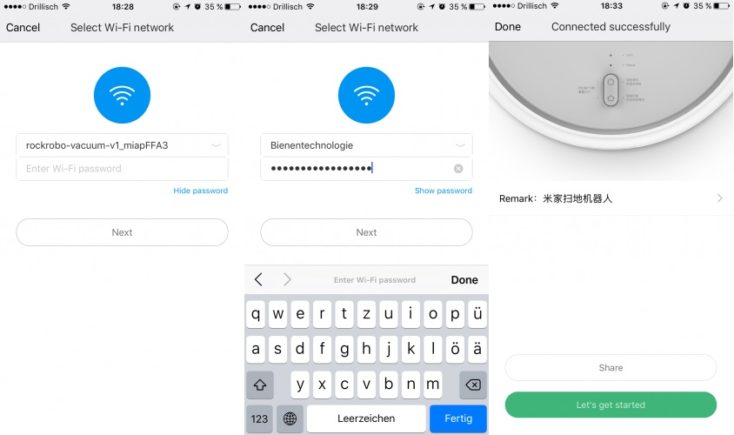 Really critical here is only the faulty or only partial translation.

Firmware updates are conveniently downloaded from the vacuum robot’s app. This means that we should expect some updates in the future – this is not planned for other robotic vacuum cleaners. Meanwhile I’m on Update 3 or 4.

The update message appears immediately after connecting to the vacuum robot and is usually completed after about 5 minutes. To do this, the vacuum robot must be in the charging station, otherwise it breaks off with (a Chinese) error message.

Like the successor to the Xiaomi Mi Vacuum Robot, the Xiaomi RoboRock, the first generation of the vacuum robot now also has room layout, the “Zoned Cleanup”. To do this, you simply have to update the firmware using the app (so far only for Android). As owners of the Mi Robot already know, the vacuum robot must be at the charging station during the update so that the battery does not become empty during the update download.

This can be a stage rollout on the part of Xiaomi that each device gradually gets the function. Otherwise the following steps can help:

First of all, the vacuum robot has to internalize the floor plans of the area to be cleaned and save them as a map. Individual quadrants can then be drawn into the map with the fingers. After pressing “Zoned Cleanup” and then “Go”, the vacuum robot moves off. And only these areas. It is also possible to set how often the vacuum robot is to drive off the drawn-in areas (e.g. kitchen or living room). Here you can choose between one and three times.

The room layout is exactly the same as with the Xiaomi RoboRock – and also here completely uncomplicated and problem-free. We really didn’t expect this update, as it will eliminate an important sales factor for the successor model. Xiaomi will have thought to keep the focus on the popular Mi Robot and will deliver an update with the room layout, which will give current and future owners of the robot a lot of pleasure.

With the newly released English app, the problems with Chinese are largely obsolete. If you still use the chinese app, we have made you a picture here with the translation of the menu items of the Mi Home App.

As gadget fans we know this: unpack, play around and then put away. However, the Xiaomi Mi Vacuum Robot is still doing its rounds. The app is seldom used anymore, as the little one travels in programmed shifts. The play instinct has decreased, but the robot is still moving and… has replaced the ILIFE robot.

Usually the robot needs 36 minutes for 38 square meters. With an operating volume of 68 dB, it is also so quiet that we sometimes let it drive during dinner, after the guests are chased out. The Xiaomi Vacuum Robot can also be used without an app, of course no map of the premises can then be viewed. 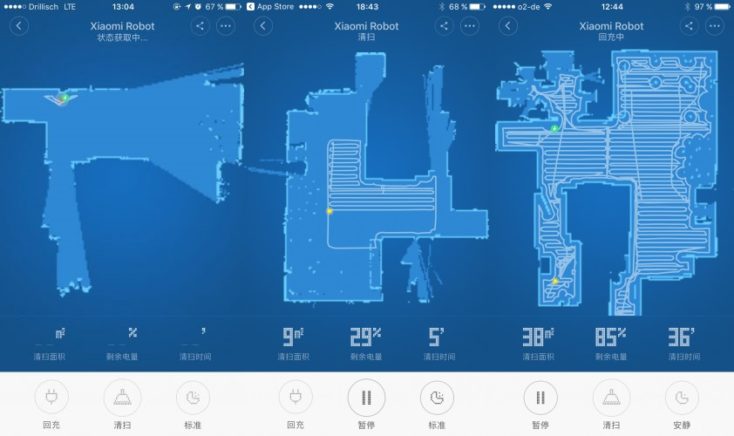 The Xiaomi vacuum robot reliably overcomes door thresholds and edges more than 1 cm high every time, as the wheels are flexibly suspended. Then it has a hard time with obstacles from a height of almost 2 cm. What seems strange at first glance is that the robot measures the apartment anew with every start. I am used to Roomba and LG models saving the card and using it for future journeys.

But: Due to the many sensors, the robot quickly formed another picture, so that next time locked doors, forgotten shopping bags on the floor, etc. are no problem. The algorithm and detection are definitely a lot smarter than with previously tested models.

Another advantage: It doesn’t matter where you start it. So we take the little helper with us to the other floor and he works reliably there too. Even taking it with you and repositioning it in the middle of a suction cycle is no problem.

The short carpet is still no problem. Even the fluffy carpet in front of the shower we don’t put up any more, because it is also sucked along – comfortably. Another little thing you’re thankful for.

As the questions in the comments about pets became more and more numerous, we also want to deal with this point in the article. The Xiaomi vacuum cleaner is definitely also suitable for apartments with pets. In our company alone, several dog owners are supplied with the vacuum robot. Also the sucking in of longer animal hair works perfectly in the test. Most vacuum robots have problems with animal hair and the cleaning brush is surrounded by a broad mass of hair. With the Xiaomi vacuum cleaner, it is sufficient to remove the brush once a month by hand without the cleaning tool supplied. It’s a little annoying, but not very time consuming.

One problem with animal hair (depending on the animal) is simply finding it (if you have a dog with a light coat at home, for example) when cleaning your home. Of course, this is spared by a vacuum robot. It is particularly exciting how much dirt, dust and hair is still found by the vacuum cleaner, although the apartment looked absolutely clean in the run-up.

Every animal reacts differently to the little helper in the household. Cats are there still clearly more accessible than dogs, not for nothing one sees frequently cats in videos on a vacuum robot. Less courageous dogs need a little more time to get used to the new, round roommate. However, this is only a matter of a few days. Except for some barking at the beginning and skeptical looks on the part of the four-legged friend, there are usually no more fierce arguments between vacuum robot and dog.

Initially there were no accessories for the official release. Even if the brushes are doing a good job so far – supplies must come sometime. Now there are the most important wearing parts:

Here are all spare parts >>

Here is a complete package >>

This means that all moving parts that lie on the outside and simply wear out over time can be re-ordered. Unfortunately, the price is about ~20-30% higher than for spare parts for the ILIFE models, but – as already mentioned – our robot still looks like new.

Conclusion of the Xiaomi vacuum cleaner

The app is (still) slightly weak and it is annoying to try the menu items for the first time. Once you have understood the functions, they are very easy to use and you won’t want to change anything so quickly anyway. The word automation is no accident. I’m telling you: To show the colleagues here at work in the app how to start the vacuum cleaner at home and how he is just measuring the room and driving around, that’s cool. The apartment is definitely clean thanks to the good suction power and finding the way after a suction run – that’s what counts.