0 Kommentare October 5, 2021by Jens
Hey, guys! Just a heads up: The linked offer is already a bit older and the price of the gadget might have changed or it might not be available anymore.

The electric air pump for on the go from Xiaomi pumps up bicycle and car tires and is rightly a very popular product from the manufacturer. The successor model was released in the summer of 2021 and has even more power. We also tested the Mijia Air Pump 1S. 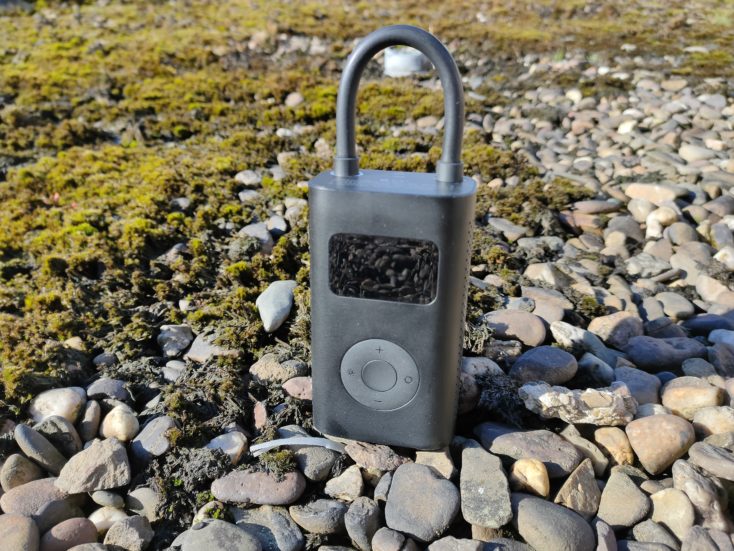 The first model appeared in 2019 and became a bestseller for Xiaomi after a short time. Xiaomi launched a few electronic tools at the time, so the cordless screwdriver also appeared a few months later.

Electric air pumps for bikes (and cars) were not new, but usually either much larger than the Xiaomi model or only usable with a cable – or both. The Mijia air pump, however, combined its own built-in battery with a compact size, making it easy to carry around in a backpack or glove compartment. On top of that, the price was low, as the gadget was always available for well under 40€ or even 30€.

If you are a cyclist and want to use the air pump only for this, then the first version is also enough, so much is said now. As long as the still significantly cheaper to get, there is no real reason to have to buy the new model.

How does the air pump work?

In case you don’t know the previous version or haven’t seen such compressors yet, we’ll explain the exact functionality and operation again here. You can also take a look at our review of the first Mijia air pump. 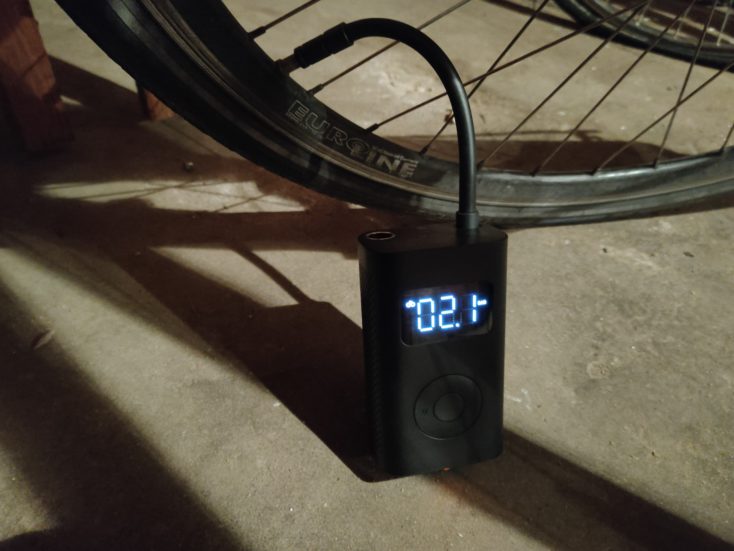 This air pump is an electronic compressor. The regulates the air pressure – in this case in the bicycle or car tire that you connect. So you save the pumping by hand.

How this works, you can see here in the video – back then still with the first model. (By the way, the flickering of the display is only due to the camera).

The device is operated entirely via the buttons on the front. You can regulate the desired pressure via the top and bottom buttons. You can switch between four preset profiles for bikes, mopeds, cars and balls via the right buttons. Here, too, you can adjust all values again (but the changes are not saved). Values between 0.2 and 10.3 bar can be set. 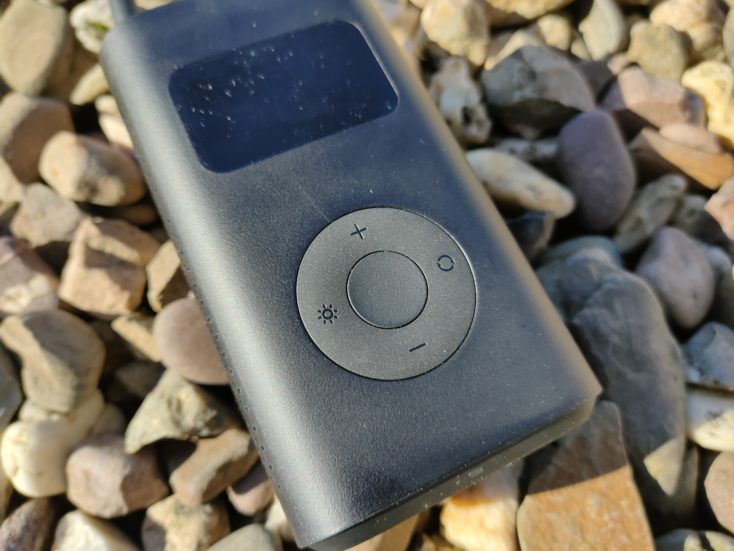 If you hold down the right button, the display switches between bar and psi. The large button in the middle turns the pump on and off.

The left button turns on the LED on the top of the unit, which acts as a flashlight to help you find the valve in the dark. It is not so bright that you can illuminate a room with it, but it is completely sufficient for the intended purpose. In a second setting, the LED does not shine continuously, but flashes SOS in Morse code (3x short, 3x long, 3x short). This might be helpful in very rare emergencies, but you probably won’t need it.

Which tire pressure is the right one?

The question of how much tire pressure is optimal cannot be answered with a single number. The answer depends on various factors, and there are different values for both cars and bicycle tires. For the car, the tire pressure is in the vehicle documents, usually it is about 2.5 bar, which is also the set value in the air pump.

For bicycles, the pressure varies more and depends heavily on the tires used. Thin tires on city bikes require a higher pressure of 3-4 bar (44-58psi), road bikes even up to 7 bar depending on the tire size. Mountain bikes with particularly wide tires also get by with 2-3 bar. The preset value of the Xiaomi air pump in the bike profile is 45 psi (3.1 bar). The correct value is usually written on the tire.

Differences from the first version

More power than before

Is the Mijia air pump 1S now worth it in contrast to the first version? The data sheet does not read so much different. Again, a battery with 2,000 mAh capacity is installed, again, the pump manages 150 psi possible. 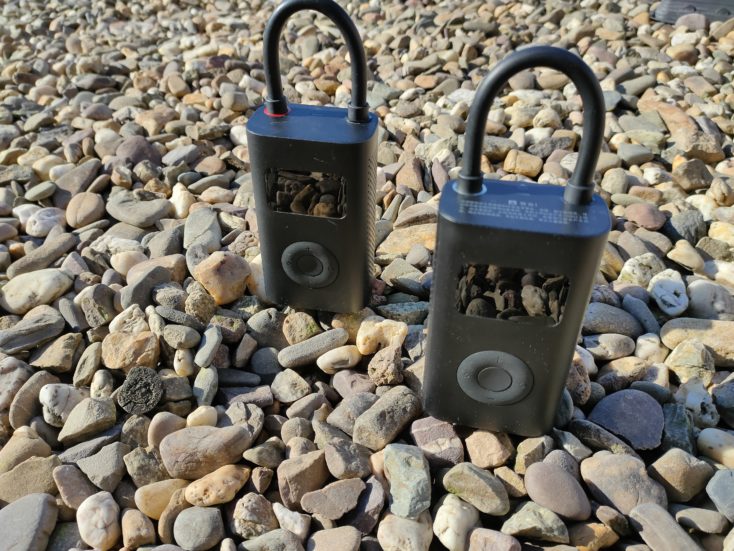 According to the manufacturer, the new version should get more out of the given. The performance had been increased by 45.4%. It is now possible to completely inflate two almost completely deflated car tires in around 11 minutes. This was not possible before and is thanks to an improved pressure sensor. If just a little air is missing, it should be possible to bring up to 8 tires back to the optimum pressure. The first model managed 5.5 tires.

We have compared both devices with each other (and will continue to do so). For example, we left the air out of Tim’s spare tire and filled it from 0 to 2.1 bar. The old air pump took 4:40 minutes to do this; the new 1S only 2:52 minutes. So the new model is definitely more powerful and can actually fill up quasi-empty tires. The differences are not so relevant when it comes to bicycle tires, where it only takes a few seconds to adjust the pressure with both models.

Not much new on the outside

The display has been slightly improved and is now somewhat easier to read and brighter. Only in very strong direct sunlight is it not always easy to see. The housing is identical and measures 124 x 71 x 45.3 mm. At the same time, the new pump is a good 50 grams heavier, weighing 484 g.

The external differences are minimal, such as the color of the ring around the valve on the top. However, there is a USB-C port for charging this time, which is a nice upgrade (but a cable is not included). The included manual is so far only in Chinese and therefore not usable. However, the first pump was later released as an international version with English instructions; it is not unlikely that this will also be released here.

We can absolutely recommend the new compressor as well; like its predecessor, it reliably does exactly what it is supposed to. Overall, the Mijia Pump 1S is more of an upgrade than a completely new model. If you only need it for your bike, you can definitely go for the first model, which costs less and has already been released as an international version.

However, the new pump is not that much more expensive. Those who can live with only getting a Chinese manual will get more performance and small upgrades like the slightly better display and the USB-C port here. In the long run, the new model should replace the old one if it comes a bit closer in price.