1 Kommentare April 19, 2019by Thorben
Hey, guys! Just a heads up: The linked offer is already a bit older and the price of the gadget might have changed or it might not be available anymore.

Xiaomi and Yeelight respectively remain true to their line and now release the second and third generation respectively of the popular Xiaomi Mijia bedside lamp. An obvious change is the new design, and it can now be integrated into the Apple Homekit. But is that all? 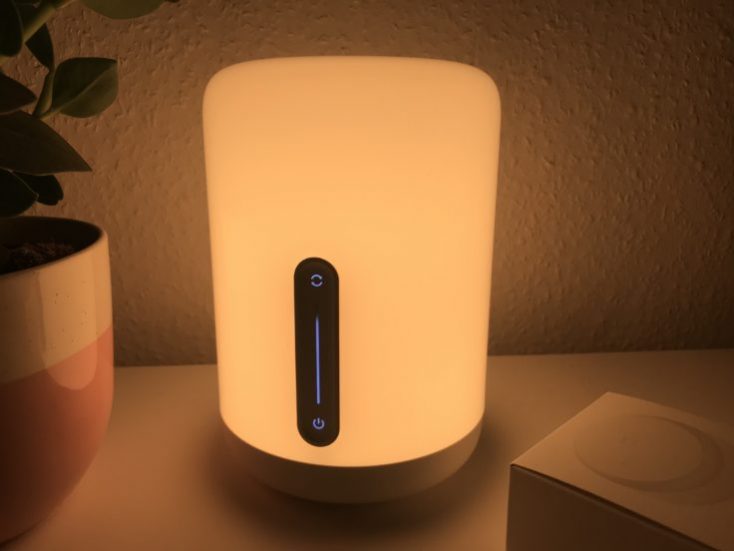 Brief classification: This is the third version of the Xiaomi Mijia bedside lamp, but it is advertised as bedside lamp 2. This is due to the fact that the first generation came onto the market without an integrated WiFi module and a revised version with integrated WiFi was launched shortly afterwards. Otherwise they were almost identical.

Basically, the new Xiaomi Mijia bedside lamp has the same design as its two predecessors (with and without WiFi). The base is again made of plastic, which moves color-wise between silver and white. But the base is much smaller, so that the rest, the actual lamp, surrounded by a semi-transparent plastic screen, has a much larger share. Overall, the bedside lamp has a size of 20 x 14 cm, which makes it somewhat shorter but also wider than its predecessor. 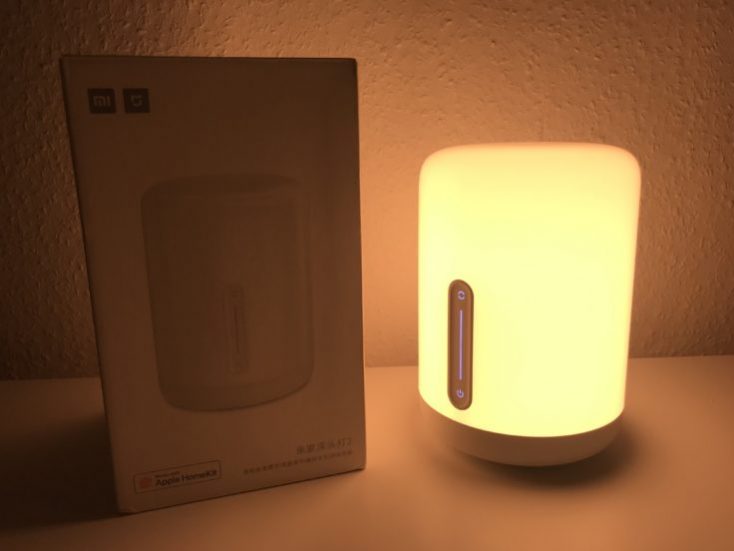 In addition, the new generation, the Xiaomi Mijia MJCTD02Y, is very well rounded overall. You can deviate slightly from the classic cylindrical shape by designing the surface without clear edges. This creates a more modern look for my taste. Whether you like it better or worse than its predecessors is up to you.

While with both predecessors nothing has changed except for the integrated WiFi module, the new generation has a little more power. On the one hand, the number of installed LEDs has been increased from 14 to 18. These are divided into 12 LEDs of 0.6W and 6 LEDs of 0.3W. In addition there is the slightly increased luminous flux of 400 lumen, 100 lm more than with the predecessor. The minimum lumen number is just 2 lumen, which is about as much as the Xiaomi Mijia night light.

In addition, there are some technical subtleties for the connection with the smartphone. These include Bluetooth 4.2 and 802.11 b/g/n 2.4GHz WiFi. Both are used to connect the lamp to the smartphone and integrate it into your own local network. 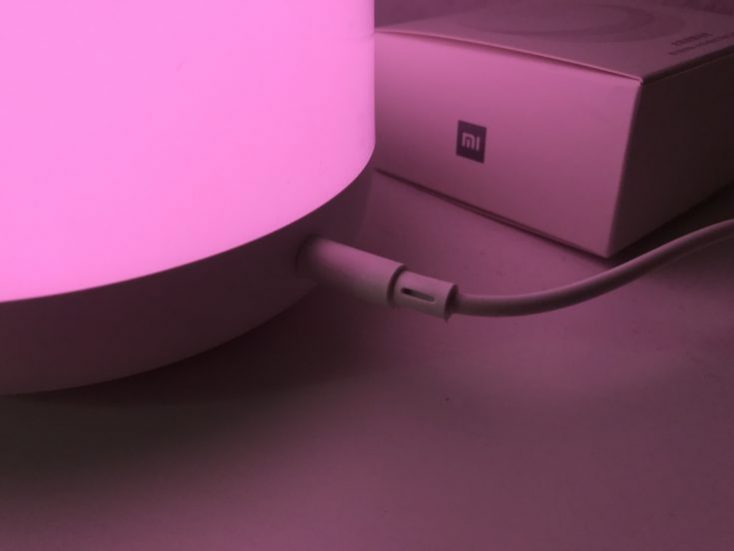 In order to supply the lamp with power, a typical hollow plug connection is provided on the base. The power supply is of course included and the cable length of 1.5 meters is long enough for my needs. Since it is a China version, there was only one China plug. But there are offers with an US Plug included. Otherwise an adapter is accordingly necessary. There is no integrated battery. However, I noticed positively that the lamp does not reset when it is disconnected from the power supply. With the Yeelight E27 Smart LED light bulb, you have to integrate it into the WLAN if it loses its power connection.

Integration of the Yeelight app

Anyone who already owns a Yeelight product knows this procedure. The Xiaomi Mijia and Yeelight products include the Yeelight App, which connects the lamp and smartphone. The setup is now playfully easy and the app performs a step-by-step procedure. Just remember to select the server “Mainland China” in the settings. Otherwise not all gadgets will be displayed and the connection may not work.

The Yeelight App (Download: Android | iOS) is required. In this app you simply click on the plus symbol in the upper right corner under the “Device” tab, select the Mi bedside lamp II and enter the WLAN password of your network. The lamp is then integrated into the network, which takes about a minute. We would recommend setting up a guest network in your WLAN for smart home gadgets from China, including Yeelight and Xiaomi, and integrating these devices into it.

Features of the Yeelight app

Even though this is the next generation of the bedside lamp, Xiaomi has unfortunately not extended the functionality of the app for this gadget. That means, we have again some standard scenes that Xiaomi has created for us (Sunrise, Party, Movie, Dating Night etc.), can freely choose the color temperature (warm white to cold white), brightness and color (16 million colors) and have some “smart” functions. These include the timer, a night mode and schedules with which you can automatically control the on and off of the lamp.

Of course you can also create your own scenes and rooms. These only make sense as soon as the in-house Yeelight/Xiaomi portfolio is larger and consists of several elements. So several lamps can be combined to a room and one can remote control this and provide with different schedules. So far, so well known.

The really new feature of the Xiaomi Mijia bedside lamp might not really interest you. The Mijia MJCTD02Y supports the Apple HomeKit and can be integrated into it. Apple’s HomeKit is Apple’s own Smart Home service, which is pre-installed as an app on every iPhone, iPad and meanwhile every Mac. And here I have to honestly say that this is or was completely new territory for me.

For integration into the Home App, both the lamp itself and the operating instructions are provided with a QR code and an eight-digit Home Kit configuration code. Just scan it and the lamp is added – easy! This can then be added to a room and/or your own favourites, just like in the Yeelight app. The Home App also offers the possibility to adjust the brightness, colour temperature and colour of the lamp. All in all, however, it is of course not quite as extensive as your own Yeelight app. 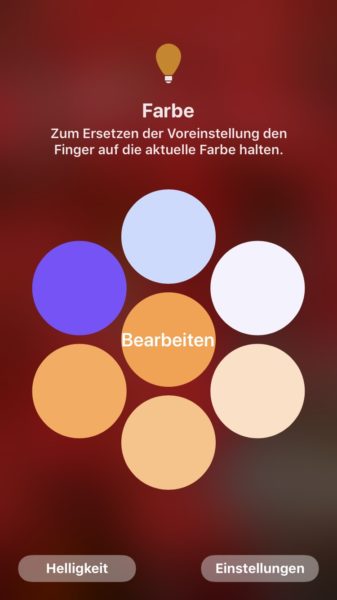 Similar to the Mi Home app, you can also set up automations for the Xiaomi Mijia bedside lamp 2 in the Home app of your Apple device. Here you have the choice between time automation (e.g. at sunrise the light goes on), local automation (e.g. person A leaves the house) or action-related automation (coupling with sensor required). However, this is only possible if a control centre is set up. Only an Apple TV, the HomePod or an iPad, which is located in your home, serves this purpose. 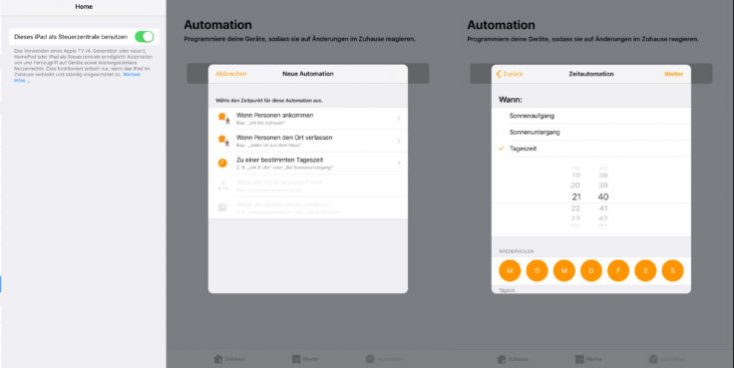 This, of course, also results in relatively uncomplicated control via the Siri language assistant. To the best of my knowledge, however, this was already done using the Yeelight app, so it’s not news.

In my opinion, the second or third generation of the Xiaomi Mijia bedside lamp is also an all-round good addition to your Smart Home. But only if you are not already in possession of your predecessor with WiFi. The fact that the version tested here has a little more “power” is not noticeable in everyday life. There are also no basic new functions in the app. An “upgrade” is not necessary for these reasons.

In my opinion the Xiaomi Mijia bedside lamp 2 is especially worthwhile if you don’t have one yet or want to have an additional one. Even if you generally control everything at home via Apple Home, the HomeKit support is probably the best feature. The same or even more functions are also available in the Yeelight and Mi Home app. And quite subjectively, the somewhat more “modern” design may also speak for the new generation, although I like both models optically.

What do you think of the new version? How important is HomeKit support to you? Probably not, is it?