3 Kommentare January 27, 2022by Henning
Hey, guys! Just a heads up: The linked offer is already a bit older and the price of the gadget might have changed or it might not be available anymore.

When I think back to the writing tablets of yesteryear, I remember the magic tablets that you could erase with a slide. Well, the displays have improved in the meantime and the pen is not only magnetic, but also much more accurate. Now, with the Xiaomi Blackboard Storage Edition, you are supposed to get an internal memory and Bluetooth, but do you even need that? 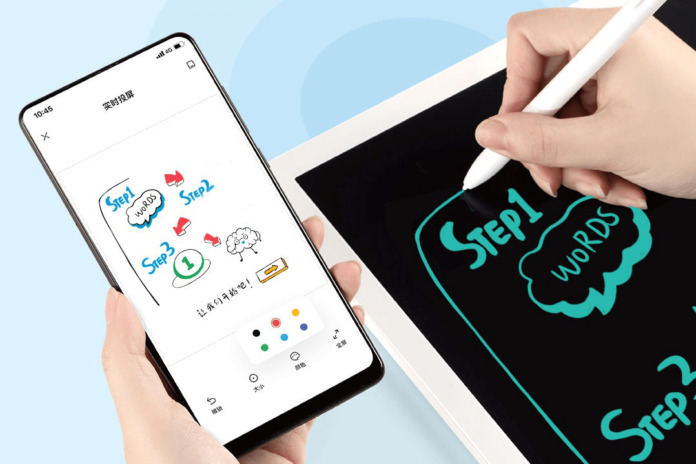 A writing tablet with a battery?

The Xiaomi Mijia Blackboard is a tablet with a screen on which you can draw important notes, sketches or pictures. The display is a 13.5-inch LCD panel. The case is made of plastic, just like its predecessor.

As with other tablets, writing is done with the included pen. Unlike the touchscreen, this avoids drawing or unnecessary marks. The pen has a tip of 0.7 mm and can register up to 2048 pressure sensitivity levels, which changes the line thickness on the tablet. 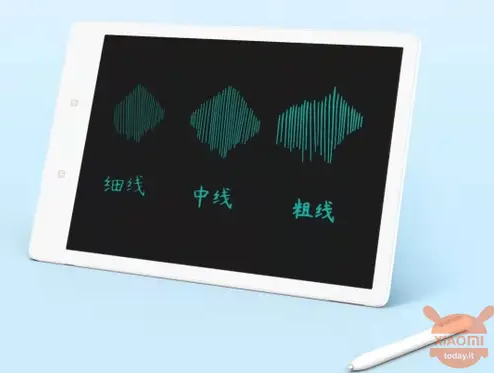 The built-in battery with a capacity of 1000 mAh should provide a runtime of almost a week, and it is charged via the USB-C port. A full charge takes 90 minutes, which I do not find very little for a battery size of just 1000 mAh.

The design of the Blackboard Edition has not changed much compared to its predecessor and reminds me a bit of an aging tablet. You can delete or save content with the “home buttons” on the bottom.

The writing tablet is great to use for notes, to-do lists like shopping plans, the weekly cleaning schedule, or just for drawing. Admittedly, I’m not the best drawer, with me the figures look more like bald stick figures. However, it’s still worth writing down various thoughts now and then before you forget them again.

Thus, the tablet is not only something for children, but can also be used at university, school or at work. Especially writing by hand could be a purchase aspect for many.

Xiaomi has already launched several writing tablets, one of which we could test. Compared with the predecessor, we get two nice additions in this model, an internal memory and Bluetooth. 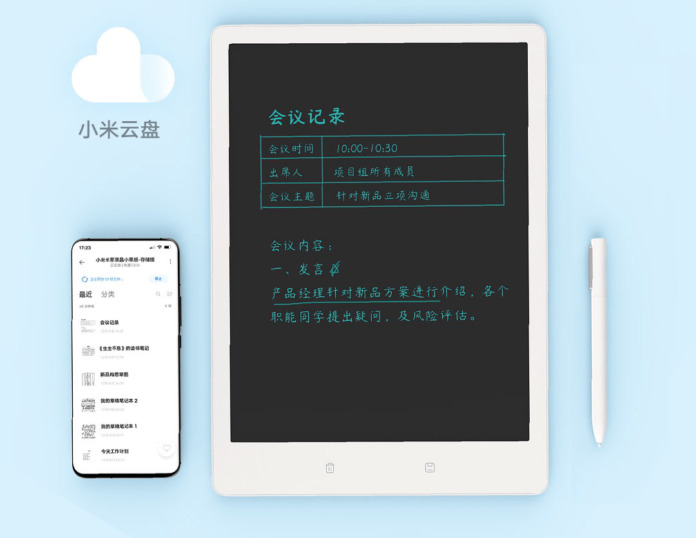 The memory is 121 MB, which may not seem very large in this day and age, but it is enough for up to 400 different “sheets”. With Bluetooth, you also get the option to send your pictures and notes to your cell phone and can make room for new stuff.

I think the Xiaomi Mijia Blackboard Edition is not bad at all. Xiaomi uses Bluetooth and a small memory to send notes, pictures or to-do lists, such as a shopping plan, to the cell phone. The battery has a size of 1000 mAh and is supposed to last a week. Charging via USB-C is up-to-date, but a bit too long with 90 minutes.

Unfortunately, the design of the writing tablet relies on plastic, just like the predecessor, which quickly makes the casing susceptible to scratches and is not durable. I would find an aluminum finish for the writing tablet much higher quality and better. The latest version is already available in China for the equivalent of just under $55. A release outside of the home market China is not yet known.