5 Kommentare October 15, 2019by Jens
Hey, guys! Just a heads up: The linked offer is already a bit older and the price of the gadget might have changed or it might not be available anymore.

The Xiaomi Mijia air pump is one of the most useful gadgets for owners of bikes, cars or motorbikes. Easy to use and easy to handle. Now available for $44.39 from AliExpress.

Last year we had already introduced a similar device: A compressor that is nothing more than an air pump. Only that it works electrically. Xiaomi now also has such a device in its portfolio, except that it’s supposed to be more compact, more beautiful and cheaper. Will that work? 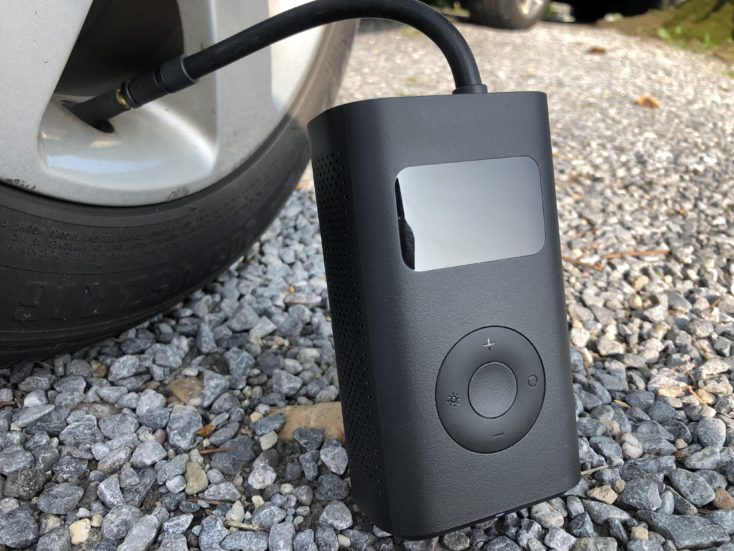 What is this gadget? “Electric air pump” is actually self-explanatory, you often find the term compressor. Compression generates compressed air in the compressor and you can inflate a bicycle tire, for example. According to the description, the pump produces between 0.2 and 10.3 bar or 3-150 PSI, which would be enough for bicycle tyres. Xiaomi states that one inflation takes three minutes. With a battery charge of the compressor (2,000 mAh) this should be possible up to eight times. We have tried this out, you can read our result below.

The idea is not new. The search for an “electric air pump” has produced hundreds of results at Amazon alone. But what makes Xiaomi better? Of course you want to convince with “style”. Where other devices look like cordless screwdrivers or other tools, the Mijia model looks like an iPod. The buttons sit in a ring, a display above serves as a display. There are no more details to be found on the matt black air pump, and in fact it can’t be recognized as such from the outside.

The only exception is the hose of the pump, which is normally plugged into the device in a u-shape with both ends. This looks a bit like a padlock. If you seriously want to award points for the design of an air pump: This pump would get the full score.

But more important is the size of the device. If you are travelling by bike and want to have the air pump in your backpack, it should take up very little space. Many electric pumps are bulky and have many additional small parts or can even only be operated with cables. However, there are also versions that are similarly compact and also run on battery power. But none of the models is as small as the Xiaomi device; without the hose, the dimensions are 124 x 71 x 45.3 mm.

The hose also serves as a mounting bracket for the pump. But this doesn’t really hold tight; in case of jerky movements, the plug-in connection of the hose loosens, which is why it’s better to transport the pump in the bag than to hang it on it. Enclosed are two attachments for different valves, a micro-USB charging cable and a cloth bag. 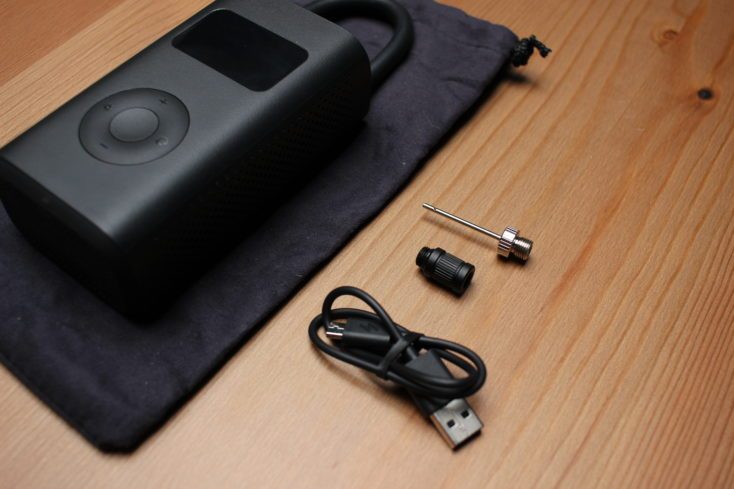 And the cost? Also the pump should be affordable again. At least in China this is still possible: 199 RMB, equivalent to about $30, costs it on xiaomiyoupin.com. We pay a little more again, from about $50. And there we are already in a price range, in which we get a comparable device elsewhere. Just the price doesn’t speak for Xiaomi.

The air pump in use

The operation of the pump is very simple. The hose is screwed on the right side (black ring), the left side (red ring) only plugged in. If the hose is pulled out, the display of the pump switches on automatically. Here you can either set the desired pressure directly with the plus and minus keys, or select preset values for bicycle, scooter, car and basketball with the right mode key. A long press on the mode button changes between BAR and PSI as the selected unit for the pressure. Pressing the large central button starts the compressor, which stops automatically when the set pressure is reached.

The LED on the top serves as a flashlight and provides enough light if you inflate the tire at night or in the basement.

At first we thought of a bicycle tire for this gadget – after all, Xiaomi advertises most strongly with it. So we tried it first. The normal connection of the pump fits on a car valve, which some bicycle tires have, but there is also an adapter for a bicycle valve. The right valve is selected, the pressure is set to the right value (here: 2.4 bar) and off we go. The pump can get a bicycle tyre empty of air to the desired value in about three minutes. If you just want to refill and you have an inflated tire, you can do it much faster. 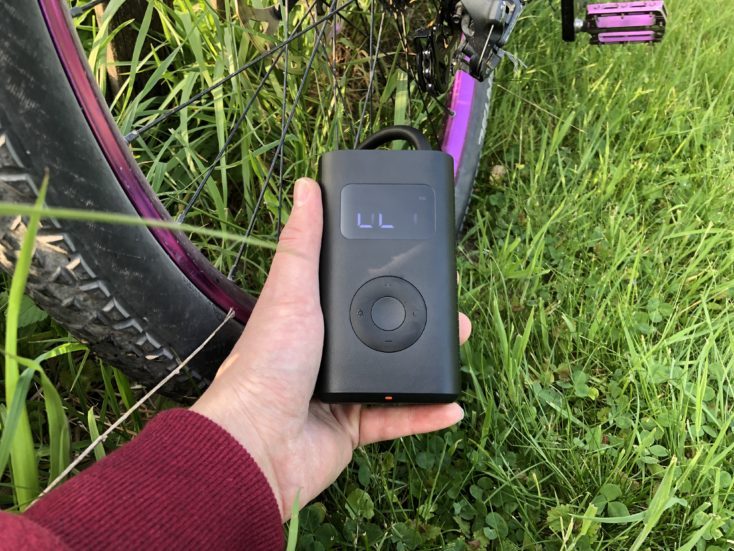 It also depends on how often you can use the pump with one battery charge. Xiaomi speaks of eight full charges, but this probably refers to empty tyres. Checking and recharging the air pressure is also possible quite often. This pump in the backpack saves the manual pumping during the bicycle tour; in addition, the compressor is a little more space-saving than a classical bicycle air pump.

(The “flickering” of the display in the video and in some photos is due to the camera and does not occur in reality.)

Speaking of checking: This is also very easy with the device, and you should do it regularly, especially with cars. If you simply plug the connection into the valve, the display shows the current pressure. If the pressure is too low, simply set the desired value directly and start the compressor. 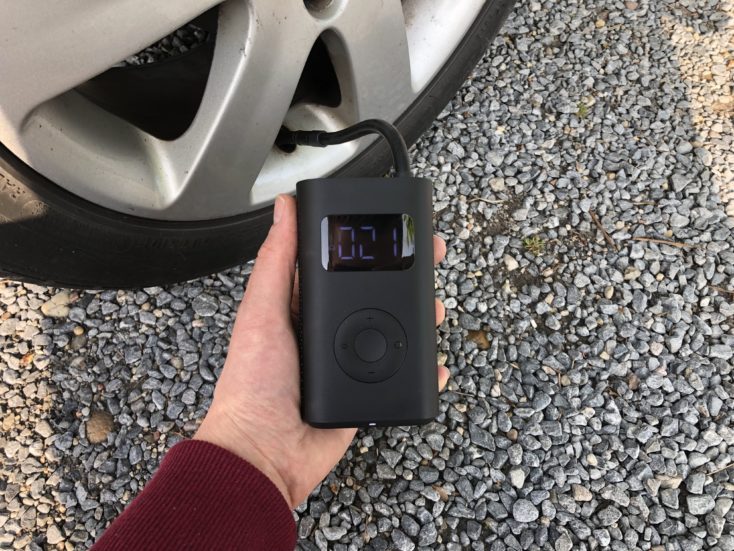 Not surprisingly, this takes a little more time than with a bicycle. Two to three minutes per tire should be planned. Fortunately, the case where you have to inflate a completely empty tire is rather rare with a car.

Measuring the air pressure on the car and filling it up if necessary is not necessarily a huge effort, but should be done regularly. With the compressor you save the way to the gas station. Of course, the gadget is also an advantage when travelling and you can check the air pressure anytime and anywhere.

Last but not least, footballs or basketballs can also be filled with the pump. Of course, this also works according to the same principle. An appropriate attachment for the hose of the pump is enclosed. Even a flat football can be completely inflated in less than half a minute. 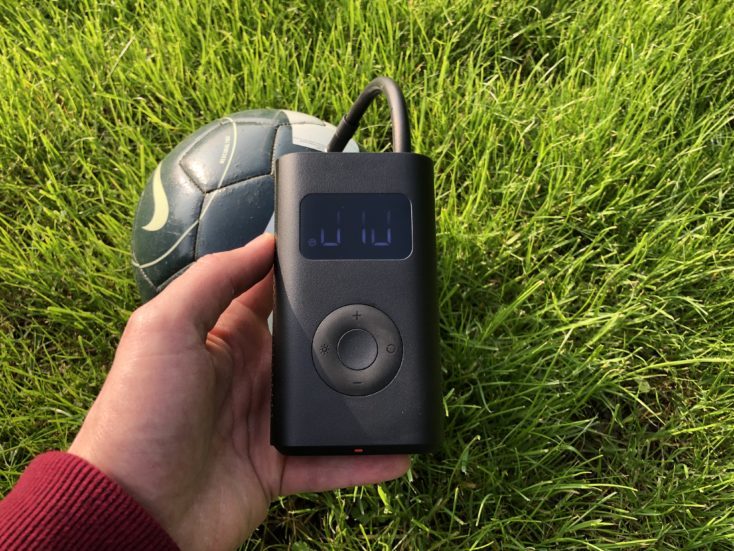 Typical Xiaomi: A tool with which most people should not have a closer relationship becomes a designer product. But who really wants to show off his beautiful electric air pump? What counts here is functionality. One advantage is rather the size, because at least the device is space-saving. The battery and the performance also convinced us in the test. The pump works reliably and relatively quickly with all types of tyres. Drivers and cyclists alike can use the gadget; the fact that you can also inflate balls is a nice bonus.

Only the price is not yet ideal. Although the compressor is not too expensive, it is not cheaper than similar models found on Amazon.

Would you use a pocket compressor, or do you just pump by hand? Or would you rather take the stop at the gas station on you? And what would the device be worth to you?