3 Kommentare February 19, 2022by Thorben
Hey, guys! Just a heads up: The linked offer is already a bit older and the price of the gadget might have changed or it might not be available anymore. 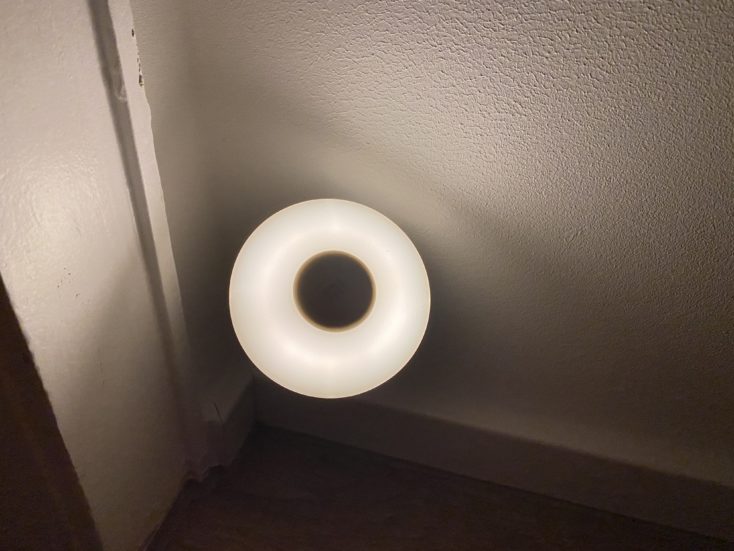 It gets, as with smartphones or Vaccum Cleaners, even with the nightlights a bit confusing. We have already tested the first generation, this is the second generation. However, since Xiaomi’s friends from Yeelight have already released a suspendable nightlight and a plug-in nightlight, and Xiaomi itself has launched a nightlight with Bluetooth in cooperation with Philips, it is easy to lose track.

In the heat of the moment, I tore open the small, white packaging of the Xiaomi Night Light 2 and quickly disposed of the box. However, there is nothing particularly exciting in it, except for the Xiaomi Night Light 2. The AA batteries required for operation are unfortunately not included in the scope of delivery, but this is not to be expected for the low price. The package also includes an instruction manual, but you can actually do without it. 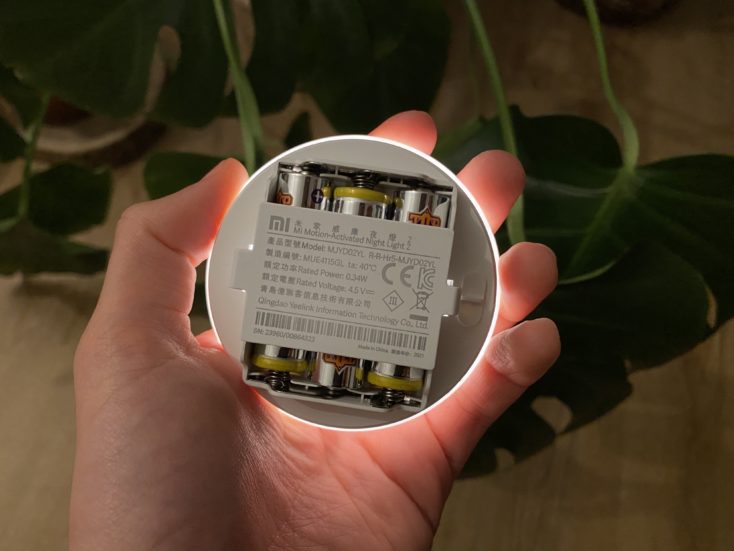 Simply unscrew the “lid” and insert the batteries. Once that is done, there is a brightness setting next to it. You can decide between the two brightness levels via a slider. Then screw the lid back on. Adhesive tape is attached to the back, so it’s better to place the well-made base directly in the right place. From experience with the first generation, I can report that the wallpaper may well suffer through removal.

The base is a magnetic base and perhaps the biggest difference from the first generation. You use it to attach the nightlight to the wall, the back side sticks to the wall via adhesive tape. The other side is concave, so that the rounded night light fits into it magnetically. Thus, you have more flexibility because you can individually adjust the illumination angle of the light. Although Xiaomi talks about 360° adjustability here, it’s a bit limited because of this design. But it is very practical. I put the light at the bottom above the footer and pointed it upwards so that the whole hallway section is illuminated. 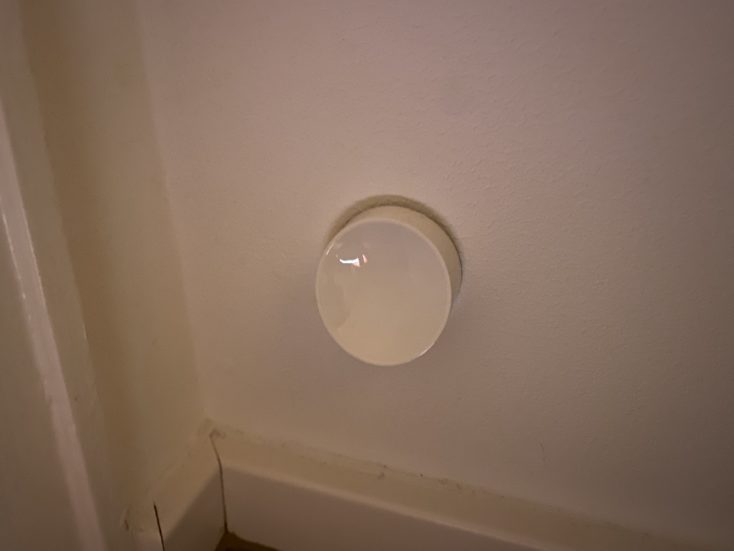 In the second generation with the model number MJYD02YL, the manufacturer increases the translucent surface. While the MJYD01YL (1st gen) virtually only shines through an outer ring, the new Xiaomi Mijia Night Light shines more to the front and thus becomes brighter. The Mijia logo (Mi Home) is located in the center, which makes it easy to distinguish between the Xiaomi and Yeelight nightlights.

Like the first generation of the Xiaomi Mijia night light, this one is powered by three AA batteries; unfortunately, they are not included. The battery compartment is located in the actual light, while the base serves the purpose of attachment. A small slider gives you the two brightness levels as an option: 3 lumens or 25 lumens. This is a clear difference from the predecessor, which only managed a maximum of 3.8 lumens. So the low level of the second generation is as bright as the strong level of the first generation.

Xiaomi Mi Night Light 2 in use

And you can tell. Since the hallway is now much larger in my house, I had to get the bigger nightlight. I generously put it on the high setting to illuminate the nearly 7 square meters of hallway well, and it really makes a difference in the evening and at night. So you don’t have to turn on the “big” light to go to the bathroom. What I find a bit unfortunate, however, is the slightly cooler light. The color temperature of 2800K tends a bit more towards neutral white than its predecessor.

The night light works with two sensors, an infrared sensor and a light sensor. With the infrared sensor, the night light detects movement and turns on. However, this only happens when there is no or hardly any light, i.e. at night or when the lights in the home are switched off. The sensor covers an angle of 120° in which it registers the movements. If the device does not detect any movement for 15 seconds, it switches off automatically.

In contrast to the first generation, the Xiaomi Mijia Night Light 2 offers a bit more brightness with 0.34 W of power, but the runtime will be a bit shorter as a result. The first generation easily lasted longer than a year on the lower setting for me. The runtime of the new night light on low setting is stated to be 15 months, on the high setting it is “only” 8 months. I could not yet understand that after a week of use, but feel even that as “enough”.

Theoretically, what’s also new is that the night light is portable. You can easily take it off at any time if you need a small secondary light, for example on the nightstand. The problem: Due to the motion detection, it theoretically has to detect movement at any time in order to light up.

We are all a fan of the first generation, but it is no longer available by now. The new generation of the Xiaomi Mijia night light offers the magnetic base, which is a clear advantage because you can adjust the lighting radius even more individually. The brightness is also several times higher, so it is an important criterion depending on the room size. Although this shortens the runtime, it can still be classified as good with over 6 months. My only criticism is the colder light, I simply prefer warmer light, but the difference is not that significant.

The Xiaomi Mi Night Light 2, or Xiaomi Mi Motion Activated Night Light 2 as it is “officially” called, is one of the few non-smart devices from Xiaomi and still gets a clear recommendation. There are also cheaper night lights with motion detectors (in multipacks) on Amazon, but they usually occupy a power socket directly and do not offer flexible settings. Do you also use the night light?