1 Kommentare May 3, 2021by Jens
Hey, guys! Just a heads up: The linked offer is already a bit older and the price of the gadget might have changed or it might not be available anymore.

The Smart Projector 2 Pro is the latest model from Xiaomi. The projector has been available in China since the middle of last year, and now the rest of the world will get an adapted version. It comes with Android TV 9.0 and a brightness of 1300 ANSI lumens. We were able to test the projector ourselves.

Full HD and a specified brightness of 1300 ANSI lumens. Thus, the projector is suitable as a home theater device if you are already willing to forgo 4K (which is still a bit more expensive, though).

The projector also relies on long-lasting LEDs as a light source, but that is hardly surprising for Xiaomi. All of the brand’s beamers have been equipped with LEDs so far. An exact statement about the durability was not made, but it is usually assumed to be 25,000 hours and more.

Besides that, Xiaomi mainly advertises the speakers, which are supposed to be above average. In fact, they even turn out to be the beamer’s biggest highlight.

Anyone who has ever bought a product from Xiaomi knows what the beamer’s box looks like. White, plain – just Xiaomi. The projector itself is wrapped in styrofoam and thus protected against slight shocks. Our model as well as the carton were also intact. 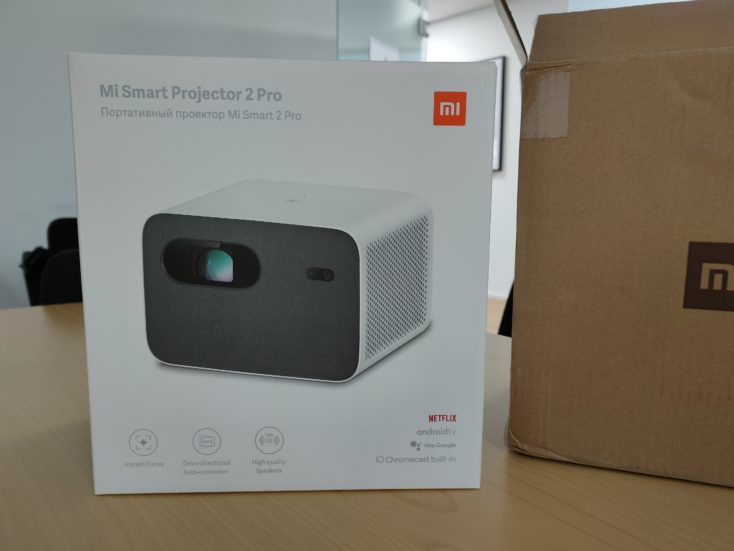 The accessories are limited to the most necessary. There is a manual (in several languages), a power cord and a remote control. The cable has a power plug that also fits us, it is the global version for Europe after all. So everything is as it should be.

The remote control has the familiar Xiaomi design, which we also know from their other beamers and TVs. The remote control is connected via Bluetooth and has to be paired with the projector when it is turned on for the first time, but this is done in a few seconds. By the way, two AAA batteries are required. 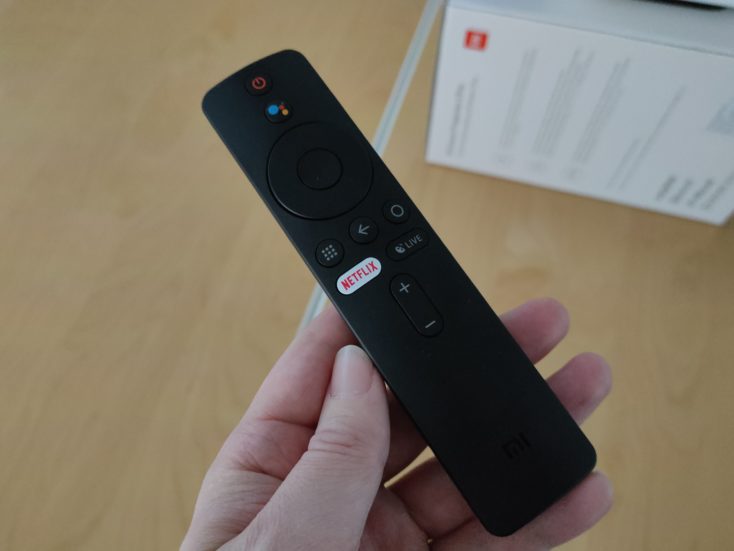 Design – beautiful all around

Talking about the design, I have to say a few words of praise for Xiaomi. The projector simply looks good. Of course, there is always a fair amount of personal opinion involved. But hardly anyone will deny that the device looks nice. 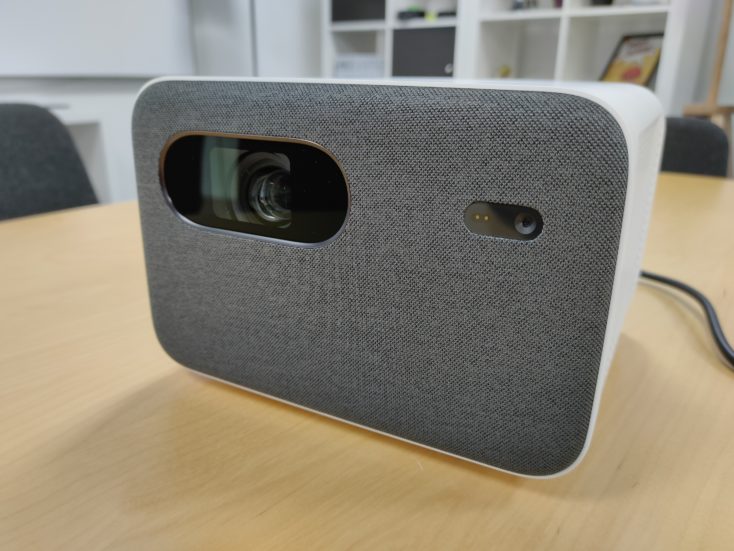 Overall, Xiaomi stays true to the usual look of its projectors here. The whole device is completely white, the only exception to my knowledge was the Mijia Projector from 2018 (which I also have at home since then). The only non-white surface here is the front. This is covered in a gray fabric, which gives the projector a bit of a speaker look. It also makes it look not quite as “sterile” and looks nicer, especially in the home. 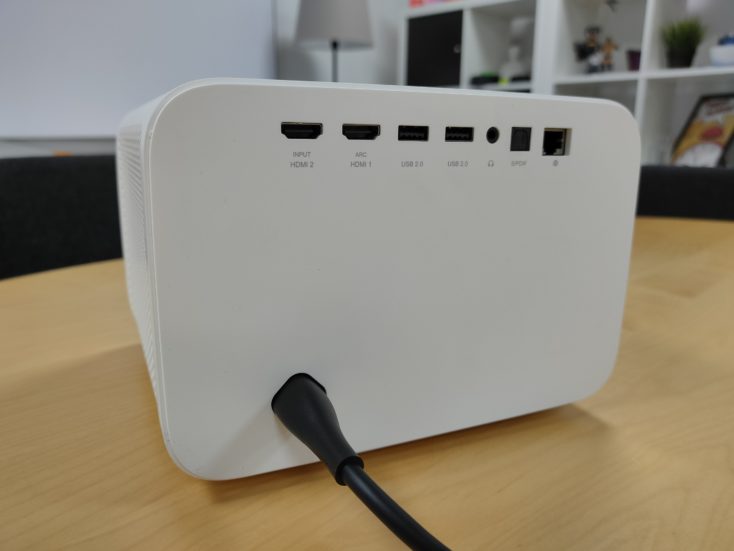 I also have nothing to criticize about the workmanship. However, I do not expect anything else for a device of this brand and price. The beamer appears to be manufactured to a high standard through and through. One exception is perhaps the back; simply cut out openings for the ports always look kind of cheap to me. I find a solution like the one in the picture below – used discreetly – nicer.

However, it is a pity that there are no adjustable feet. There are four rubber or silicone nubs on the bottom, which guarantee a non-slip stand, but only horizontally. If you want to project the image up or down, you have to tilt the projector somehow. Of course, it has a keystone correction, but you only really want to adjust the image in exceptions because of the loss of resolution.

There are options in the settings to flip the image horizontally. There are four threads on the bottom for this, which are hidden under the rubber studs. With the appropriate screws, it is also possible to mount the projector upside down.

No surprises here. We find two HDMI 2.0 ports on the back, one of them with ARC. The two USB 2.0 ports will probably be used primarily for connecting peripherals like a mouse and keyboard.

Besides that, we have a headphone jack, an S/PDIF port, and an Ethernet port.

The resolution of the projector is 1920 x 1080 p, commonly called Full HD. However, 4K content can be rendered just as easily. The throw ratio is about 1:1, i.e. the image is as big diagonally as the projector is away from the screen. A distance of 2.40 m from the screen corresponds (approximately) to a 2.40 m image (or 100 inches). Theoretically, more should also be possible; examples up to 120 inches are mentioned in the manual. 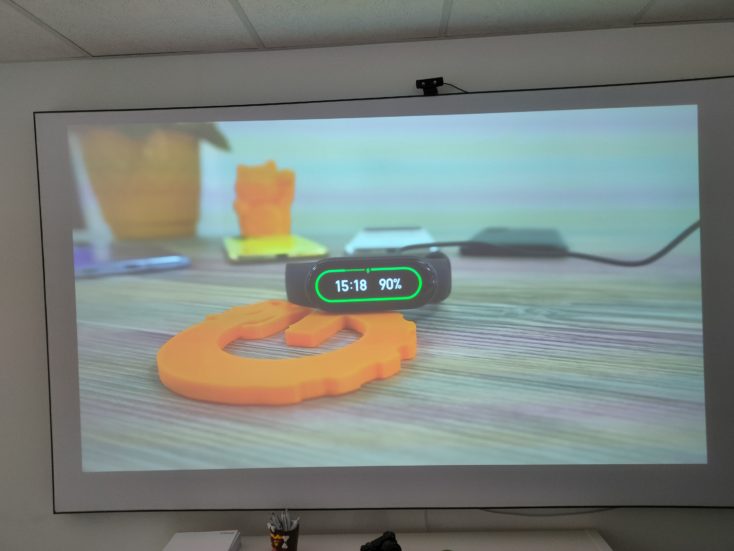 I consider 80-100 inches to be ideal here, and the image looks both bright and sharp enough. Both of these diminish at some point with even larger projections, but we unfortunately don’t have enough space here to try out 120 inches and more.

The image can still be edited manually and values like contrast, saturation and sharpness can be set individually. Alternatively, you can choose one of five preset profiles.

Auto-correction as a special feature?

On the front of the device, a small sensor stands out next to the lens. This is responsible for automatically adjusting the focus and keystone correction. If you move the projector further away from the screen or even turn it a bit, the image is automatically adjusted. 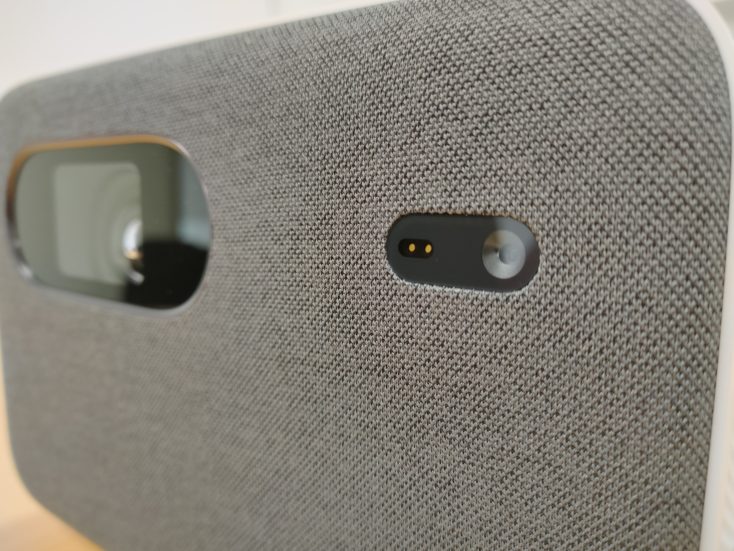 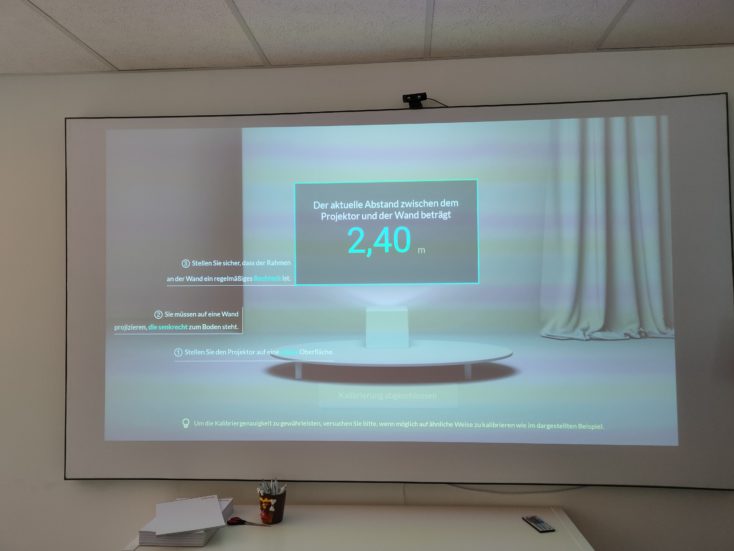 While I am consistently satisfied with the adjusted sharpness, the keystone correction does not quite do what it is supposed to. The image is often slightly distorted at the upper corners and the upper edge of the projection is not horizontal. However, both settings can also be adjusted manually.

This is a point that is often criticized, especially in inexpensive devices. Even if resolution and brightness are “not that important” and you make do with a cheap model – a loud fan still ruins the movie experience. I’m admittedly not that demanding myself when it comes to that, and can definitely live with an audible fan. In many cases, the sound becomes a “background noise” that is not really noticed in action-packed movies.

Nevertheless, I have to say: The Mi Smart Projector 2 Pro simply stands out positively here. Xiaomi talks about less than 28 dB; everything below 30 dB is generally considered “quiet”. I can only speak of my perception here, but I have never experienced a projector that is as quiet as this one. For me, this is one of the biggest plus points of this device.

Let’s get straight to the sound you want to hear: the built-in speakers. Two single speakers with 10 watts each are installed here, which also sound really good. I would even go so far as to say that additional external speakers are not necessary, even for an extended home cinema evening. Could the bass be more voluminous? Sure. Do the trebles not sound quite as pleasant, especially at maximum Operating Volume? Also true. Of course, you can want better, more spacious sound, which is exactly why there are corresponding sound systems. Overall, however, you can hardly demand a better sound from a beamer than the Mijia Beamer offers here.

Tim also listened to it and is not completely of my opinion. For him, it could still be an additional system. He especially notices the not so strong bass – but he also tests headphones and speakers on a daily basis and perhaps considers it more in terms of music playback. Overall, he felt reminded of the Xiaomi Mi Bluetooth speaker.

Where we agree, though: No beamer we’ve tested has had better speakers.

Gone are the days when we had to unlock the English language in the developer options with additionally installed .apks and YouTube could only be played via external devices. Xiaomi has long since gone further with its devices sold in Europe and delivers Android TV 9.0 here with everything that comes with it.

German can easily be selected as the language during the setup. You can already log in with your Google account via smartphone during the installation and thus have all linked accounts and settings directly available. Netflix is preinstalled and even gets its own button on the remote.

The supported Google Assistant is not new for Xiaomi either; we could already use it in the Mi TV 4S. Once again, you can simply speak into the remote and jump directly to your favorite series on Netflix or a certain YouTube video. Chromecast is also supported.

Other devices that are integrated into the smart home can also be controlled via Google Assistant. Xiaomi mentions the in-house vacuum robots or lamps that can be controlled via the projector using voice control. Of course, this is only interesting if you already use several smart home devices from Xiaomi.

By the way, a 12nm Amlogic T972 processor with 2GB RAM works inside the beamer. 16GB of storage is available on the beamer itself.

It’s nice that Xiaomi continues to launch global versions of their beamers as well. From experience, these are always quite well received. Since the launch of the first short-throw beamer, many fans have been eagerly waiting for more beamers and TVs to officially appear in this country.

After my first impression was rather restrained (“Another Xiaomi beamer? All right.”), some points could convince me very much in the meantime. First and foremost, the really quiet fans and the excellent speakers should be mentioned here.

The picture is good, no question, but not the deciding factor for me here. The brightness is absolutely sufficient, but also not special; color space and contrast are also not much better than on other devices. If you only look at the resolution, you can get Full HD LED projectors much cheaper. Minor flaws are the (in our model) not always flawless automatic keystone correction – which is a bonus anyway – and the non-adjustable feet. These are all minor issues.

All in all, the Mi Smart Projector 2 Pro is worth the money. If you are looking for a nice and, above all, quiet projector with good speakers, you will be happy that Xiaomi now also serves the European market with such devices – even if the best price is reserved for imports from China.