0 Kommentare August 3, 2018 by Maike
Hey, guys! Just a heads up: The linked offer is already a bit older and the price of the gadget might have changed or it might not be available anymore.

With the Laser Projector, Xiaomi has launched a short-distance beamer that has amazed us. Now the $1600 beamer gets company. A further beamer was presented now, which costs with approx. $700 clearly less. 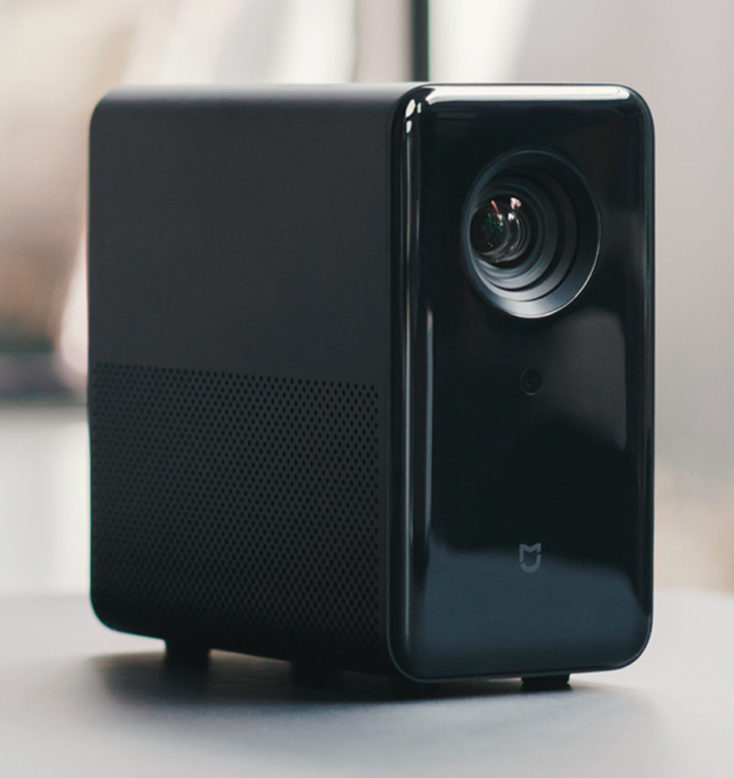 The little brother of the Xiaomi Laser Projector?

Xiaomi originally announced the projector via Weibo and then listed it on Youpin. It is now also available in online shops. Like the laser short-distance beamer, which was launched at the beginning of 2018, it will appear under the Mijia or Mi Home brand, which is responsible for many of Xiaomi’s smart home products. The Mijia logo is clearly visible on the beamer.

Unlike the beamer just mentioned, this is not a short-distance beamer, but a “classic” model. This is smaller, lighter and thanks to the generous Keystone correction not tied to a fixed place in front of the screen. And: The beamer automatically adjusts the sharpness and keystone correction. How well this works, we will see below.

In direct comparison with the Laser Projector, the Mijia beamer naturally takes the short straw, which is already expressed by the less than half as high price. No laser technology is used here, the brightness is significantly lower at 800 compared to 5000 ANSI lumens. However, they do not differ in resolution and operating system. The new beamer also supports 4K videos, which are scaled down to 1080p accordingly.

Design of the Mijia beamer

The beamer is beautifully compact and – typically Xiaomi – also really beautifully designed. Unlike other models, it is high rather than wide. Due to its slim, high design, it does not require much space and can be easily accommodated. 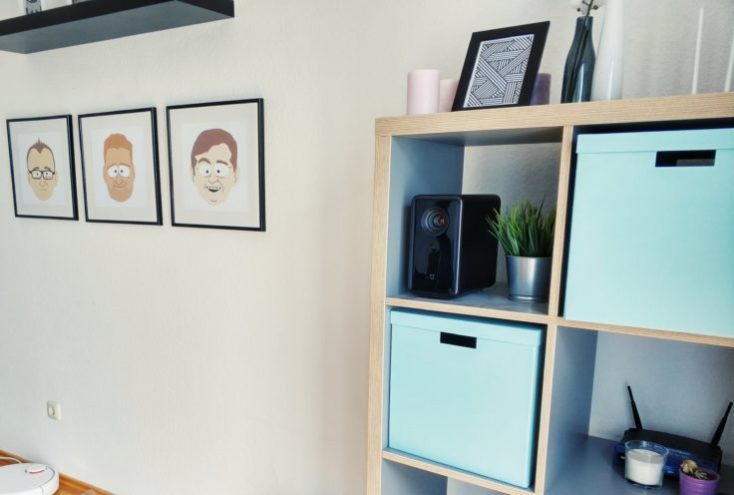 In the lower half are the speakers, accordingly the sides are perforated here. On the back we find the connections, which were accommodated at the right edge. One audio output, one HDMI and one USB port. The power cable, which is plugged in underneath, only has a Chinese power plug, so it needs an adapter. It is easier to buy a new power cable with a suitable plug.

Four small feet made of non-slip rubber are located under the device. They are not adjustable in height, which is one of the few points of criticism. To display the projection higher or lower you have to make your own support or underlay a book. On the top is the power button (which you won’t use much with the remote control).

The projector is operated with the included Bluetooth remote control. This fits naturally to the projector and is completely in matt black. Use the ring-shaped buttons to navigate through the menu, below it there is a home button and buttons for “back” and the menu. Plus and minus control the volume. The only key you probably don’t need is the microphone directly below the on/off button: This activates the Chinese voice control.

The remote control must be connected to the beamer after it is switched on for the first time. This is largely automatic; simply follow the instructions on the projection. The text is Chinese, but pictures tell you which keys to press.

The most important data

We are talking about 800 ANSI lumen brightness, the built-in LED is an OSRAM P1W/A. The size of the projection is between 40 and 120 inches, i.e. a maximum of about three meters in the diagonal. The resolution is Full HD, whereby as already with the Mi Laser Projector 4K videos can be processed and played back as Full HD.

The ratio of distance (to wall) to projection size, the so-called Throw Ratio, is 1.1:1, which means that the beamer can be positioned relatively close to the wall. When placed 98 cm from the screen, it creates a 40-inch projection. A table with the image sizes and distances can be found in the manual, we have also inserted a corresponding table for you here. For the maximum projection size of 120 inches, the beamer must be placed 294 cm from the wall. For this, however, a correspondingly large free area is required. 120 inch diagonal means a 265.7 cm wide and 149.4 cm high picture. This is true home theater format.

In the run-up it had already been asked whether 800 lumens were sufficient. (Spoiler: they are) First, these are ANSI lumens, i.e. brightness measured in a standardized method. The value is always lower than the other lumen values, which can vary considerably depending on the measurement. In addition – as has been mentioned more and more in the comments – the brightness of a home cinema beamer is not quite as important anyway. The home cinema (your living room, garage,… whatever you use) should be darkened anyway.

The Mijia Projector also provides a very good picture in dark rooms with sufficient brightness and good contrast. Especially when the 120 inch is not fully used and the light is distributed over a smaller area, it is sufficiently bright. Despite the different specifications, it is not noticeably darker than the Laser Projector. 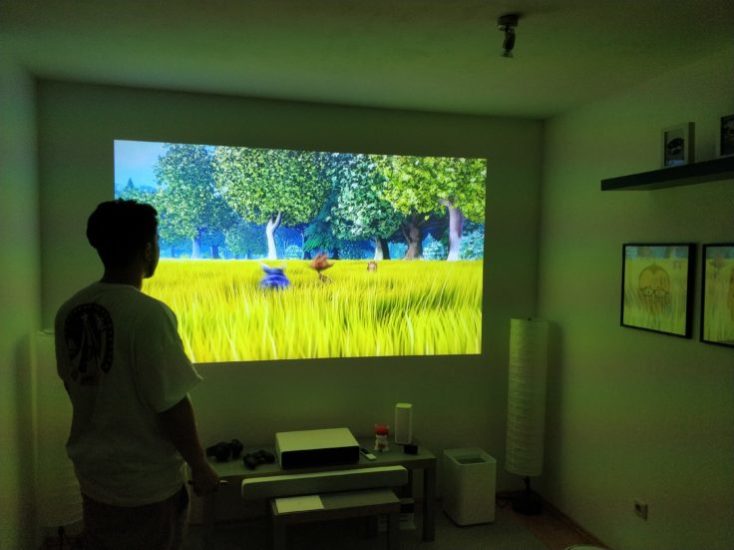 But it should not remain unmentioned that it really weakens in sunlight. In broad daylight you have to cover the windows well. Of course, outdoor use is out of the question as long as the sun is still shining.

Playback is in Full HD, i.e. 1080p. This already looks very good, but 4K recordings can also be played back. These are scaled down to 1080p, but still produce a noticeably (if only slightly) better image due to the higher bit rate.

The colours already look very good in the factory settings, but can be readjusted if necessary. By the way, there is no visible rainbow effect.

The beamer is equipped with an Amlogic T968-H CPU and 2 GB DDR3 RAM. This is enough to ensure that the menu can be operated smoothly. 16 GB memory is also integrated, so you can store videos and photos to a certain extent.

This beamer is also equipped with Xiaomis operating system MIUI TV, which is based on Android 6. Anyone who has read our test for the Xiaomi Laser Projector already knows this. For everyone else, however, we will summarize everything once again.

Changing the language to English

Only the Chinese language is supported by default. However, there is an easy way to switch most of the menu to English. Install an app like “Dev Settings” to access the developer options. This may sound complicated, but it is extremely simple. Simply download the.apk and put it on a USB stick, connect it to the beamer and run the application. As with the Laser Projector, here too I will briefly explain the individual steps you have to take:

The individual steps necessary to change the language:

A small media center – but only in China

The Mijia Projector could be a small media center. There are again many selectable services, streaming platforms, children’s channels and games. Unfortunately they are all a) in Chinese and need b) a corresponding Chinese Mi Account. And even if you were to go around all that: The offer is almost exclusively limited to the Chinese program.

But you could (mostly) install your own applications without problems. For example, download the Netflix or Amazon video.apk and install it in the same way as described above. However, they are not supported by the remote control, so you will need to connect a mouse to navigate to the aps. YouTube, on the other hand, does not work as a Google application, as does the Playstore. The easiest way to do it is simply by connecting a TV box or laptop.

A keystone correction of up to 45° vertical and horizontal allows a very free placement of the beamer. This does not quite reach the comfort of the short-distance beamer, but gives you some freedom when setting up your home cinema. If you like, you can also mount the beamer under the ceiling (upside down); the picture can be mirrored and “flipped” as you like. However, there are no threads to screw on, and because of its shape alone, the beamer is better placed in the room.

Use the menu button on the remote control to go directly to the other settings. Here you can adjust brightness, contrast, saturation, sharpness and hue individually, or choose from some preset profiles. Even if the default settings are already very good, the picture can be adjusted to individual preferences.

For the sound provide two 10W speakers inside. The volume of the beamer itself or the fan is quite quiet at 26 dB. In fact, you don’t hear anything about it as soon as sound comes out of the speakers. That’s the way it should be.

The sound is above average for a beamer, even if it is not as good as a real sound system. Nevertheless, you can enjoy movies and video games with the sound of the beamer. If that’s not enough, you can also connect your own box/equipment via the audio output.

What is the right screen?

The question of the right screen has already been discussed extensively. There is no best option for every situation, but the screen is almost as important as the beamer itself. If you have a white, smooth plastered wall, that can be enough. If you want an even better picture, you can’t avoid a canvas.

The subtle differences due to different whites and shades of grey, however, are either hardly noticeable or negligible for most people. But since you can still buy a new canvas, our recommendation is: Just try it out. If the quality on your wall (or canvas made from sheets you made yourself) is enough, you don’t need a canvas.

Conclusion, price and availability of the Mijia Projector

In China or at youpin.mi.com the beamer costs 3999 RMB, the equivalent of about $580. we had assumed a price of about $700 for the import at the announcement, and see there, the price is between $650 and $700, depending on the shop: You normally don’t get an LED beamer with 1080p resolution and comparable features for this price. It only looks different if you do without LED technology. Beamer with lamp are even more numerous; Full-HD-beamer are available from about $500, but besides LED-lighting you don’t need the other functions like the installed OS and the autofocus. A comparable device is otherwise only available for well over $1000.

Xiaomi again delivers a very good product that convinces and is fun. The reason why it doesn’t cause so much euphoria is simply the short-distance beamer, which simply puts it a bit in the shade. We will of course continue to use and test the Mijia beamer and add long-term experience to the article.

If this is really extravagant and you want an even better beamer, you should also have a look at the Xiaomi Laser Projector.