Xiaomi Ninebot Gokart Pro & Lamborghini Kart 💨 Because why not?

After the Lamborghini Kart, Xiaomi also brings the Ninebot Go-kart Pro into crowdfunding. The price of $1,499 (Launch Day Offer) is of course very high.

The Ninebot GoKart Pro is the Pro version of the already existing Ninebot GoKart. Of course there is also an action-packed trailer from the Chinese tech giant:

The financial goal of the campaign has already been achieved, but you can still select different perks to have a go-kart delivered to your home. Obviously the driving behaviour has been improved compared to the previous model, and you should also be able to drift better. Up to 23 mph (37 km/h) can be driven with the go-kart. In the professional area, the karting, go-karts reach top speeds of 60-75 km/h.

Compared to the previous model, the Pro version has also become considerably more expensive. Ninebot are now pioneers in the field of e-mobility. After buying Segway with the help of a cash injection from Xiaomi 2015, they regularly launch new models – and apparently continue to do so. But these are more entertainment than everyday objects.

Lamborghini Kart: Why not?

Xiaomi also unveiled a new go-kart at the event on August 11 to mark the tenth anniversary. The Xiaomi Ninebot Lamborghini Kart is yellow and produced in cooperation with Lamborghini and is based on the existing Ninebot GoKart. 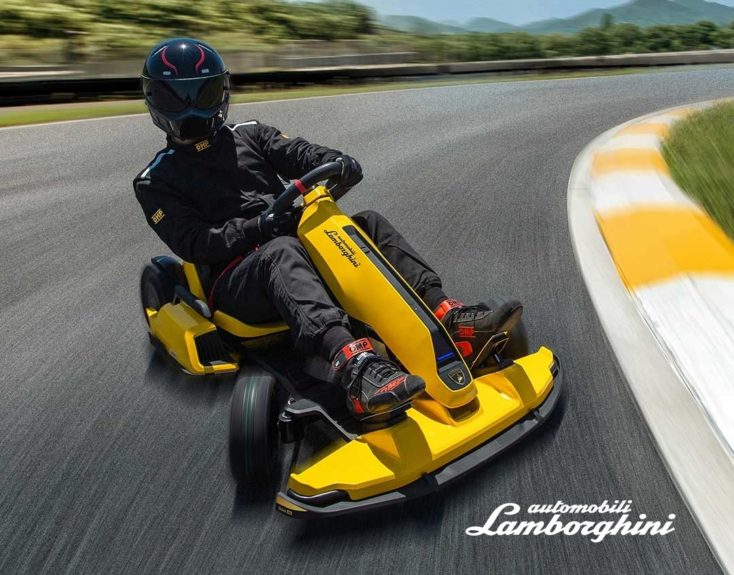 What do you do when you want to celebrate the tenth anniversary of your tech company? Join forces with a luxury car manufacturer and launch an electronic go-kart, of course. Two years ago, Xiaomi first presented a go-kart, which at the time was intended to complement the Segway Mini Pro. The Lamborghini Edition is now an upgrade to it, the very end of the presentation following the Mi 10 Ultra and the Mi TV Lux Transparent Edition.

That’s why the speed has been increased and the kart can reach up to 40 km/h (25  mph). The acceleration that the kart achieves should be 1.02 G. That sounds a lot, nevertheless I googled briefly, and in fact this corresponds to an acceleration from 0 to 100 km/h in 2.83 seconds. So the kart really presses you into the seat when accelerating. Specially made tyres are supposed to invite you to drift, and there is also a nice rear spoiler. 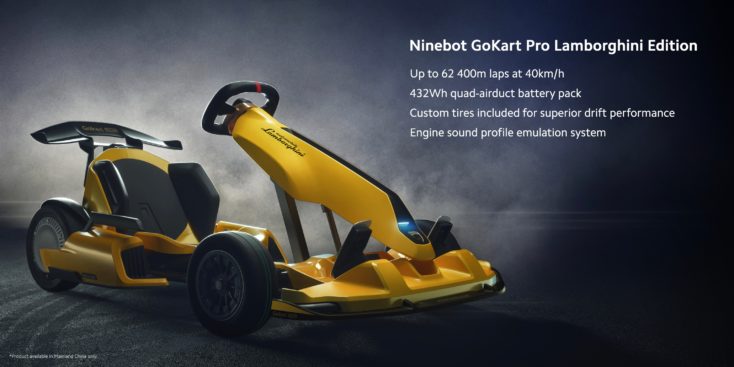 But let’s be honest: Who is interested in all the technical data? When you see the kart, you just want to get in and push the accelerator all the way. So that you can do a few laps on an appropriate race track or simply in a large warehouse – you wouldn’t have to ask me twice.

The kart is now on sale in China, but it is only produced in limited quantities and is therefore difficult to get outside China. The price in China is 9.999 RMB, about $1445.

Would be nice to have it, right?