The “kitchen Porsche” is often ridiculed, but if you exclude the price, the Thermomix from Vorwerk is certainly a good product. I already wished for a “Xiaomi Thermomix” in the 2018 Year in Review and apparently Xiaomi was looking in the direction of Wuppertal (Vorwerk headquarters). After all, the Xiaomi Ocooker food processor is now crowdfunding in China! Is the “Thermo Mi Mix” also coming to us? 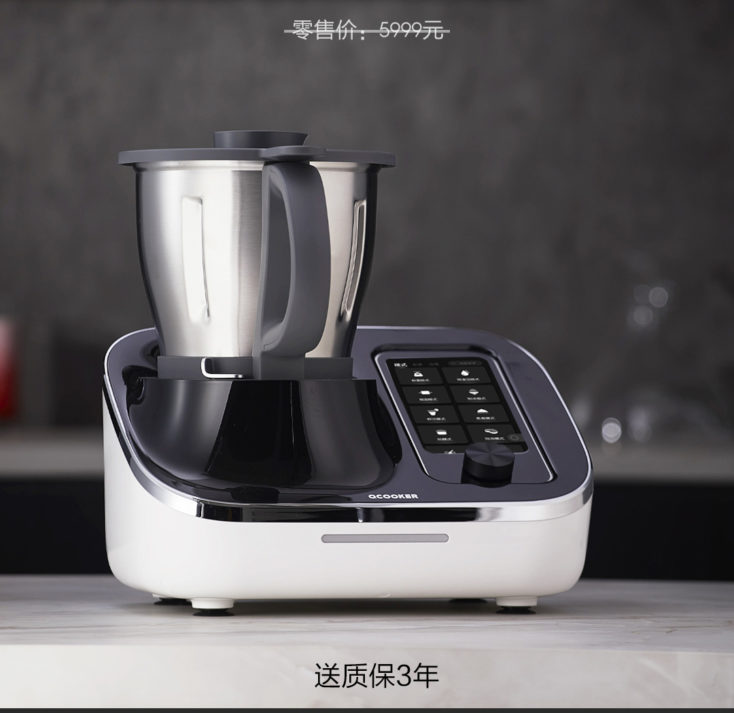 The Thermomix from Vorwerk is a very popular german kitchen gadget. There might not be an american equivalent but it is also available for the US. It is comparable to a luxurious slow cooker with a lot more functions.

More than just a Thermomix copy?

Xiaomi is not the first to “copy” the food processor from Vorwerk. Silvercrest (LIDL) has also made several attempts in this area and was recently able to adapt the successful recipe. Bosch also offers an alternative to the Thermomix with its Cookit food processor, but sets slightly different priorities. The Circle Kitchen Intelligent Multi-Purpose Cooking Robot White (thanks, Google Translator) from Xiaomi uses the same idea, but relies on an independent design. As is so often the case, Xiaomi does not appear as a producer itself, but leaves that to the manufacturer “Ocooker“. 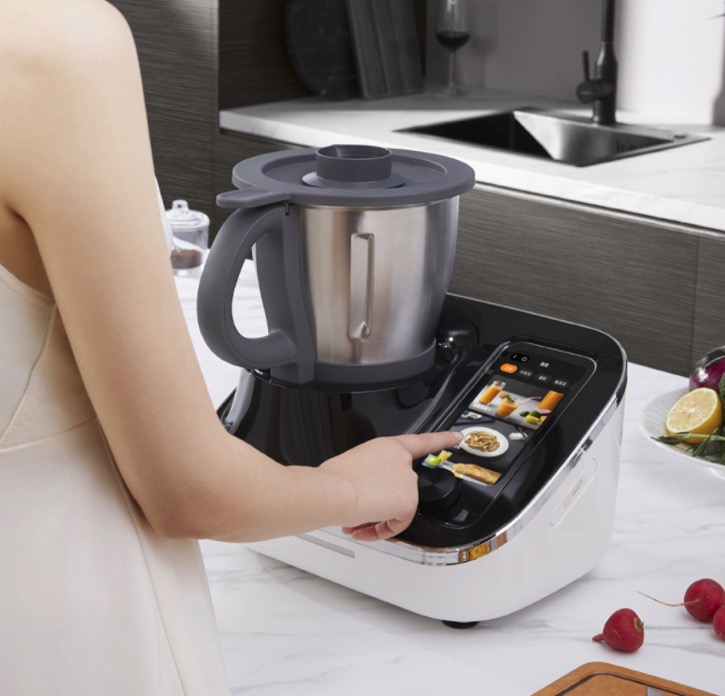 Unlike the Vorwerk models, the mixing bowl is not centered, but sits on the left, while the touchscreen display is on the right. This offers a display diagonal of 7 inches, so it is even slightly larger than a Redmi Note 9 Pro, for example. There is also a rotary knob underneath, which is also essential for operating the food processor, just like in the original. In addition, the Xiaomi Ocooker is equipped with a speaker that provides spoken instructions for the selected recipe or lets you know when the dish is ready. 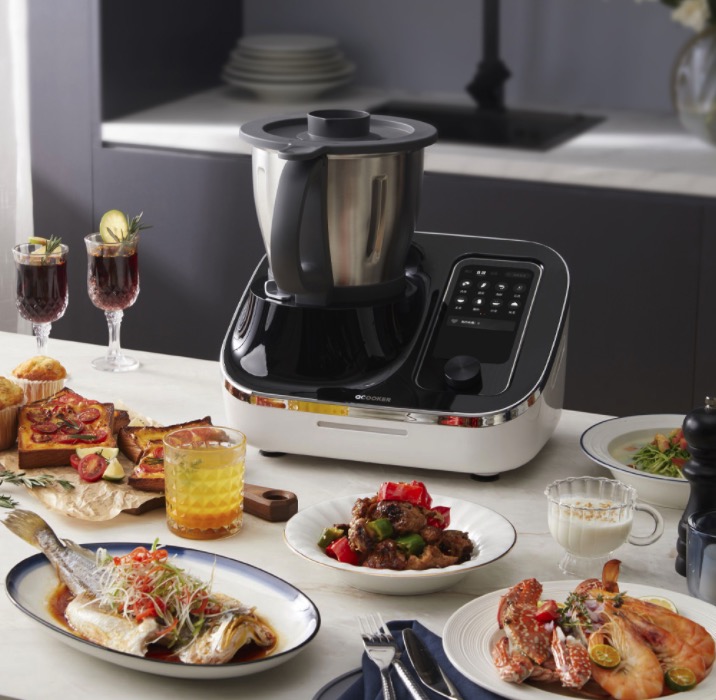 But why do you need a touchscreen display on a food processor anyway? Vorwerk has been doing it since the TM5 and Xiaomi has been inspired by it. Recipes are already “pre-installed” on the Ocooker, including instructions and ingredient list that you can easily read off. In addition, the food processor is an IoT product, so it is equipped with WiFi and can download new recipes via the in-house CookingIoT. Android serves as the basis here, which can also play videos on the touchscreen display.

Performance of the “Xiaomi Thermomix”

However, the integration to the Internet and the smart aspect are only one facet of the “Xiaomi Thermomix”. Xiaomi itself pitches it as a “21-in-1” device. Like the new TM6, Xiaomi’s version can probably sauté, but of course it can also cook, knead, stir, chop meat or even ice, grind, ferment, boil rice, steam, and so on. In terms of performance, this should put it on a par with the “twice as expensive” TM6. Of course, a scale is also integrated, which, in contrast to the original, hopefully won’t be ruined immediately if you move the device. 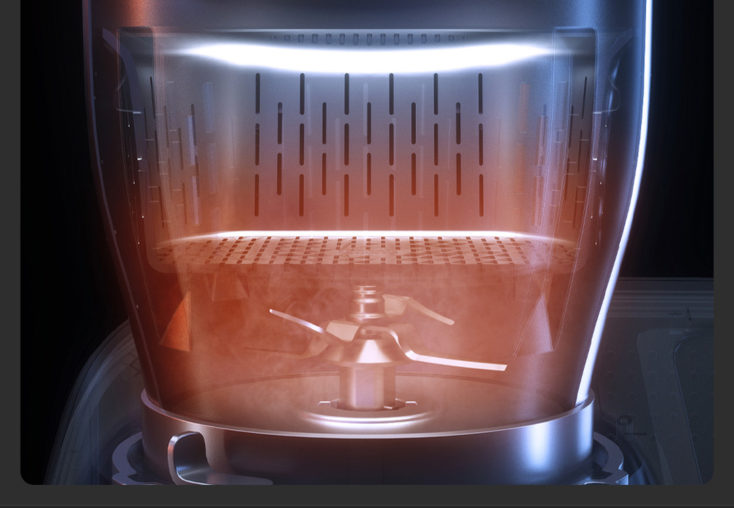 Inside the 7.4 kg device is a 1,500W motor that drives the stainless steel mixing blade. Like the original, this also consists of four blades that are slightly offset. The mixing bowl has a capacity of 2.2 liters, just like the Thermomix TM5 or TM6, and should be enough for about 3 servings, according to Xiaomi, although that certainly depends on the dish. The Xiaomi Ocooker food processor can reach a temperature of up to 120°C/248°F.

As someone who has often disassembled a TM31 or TM5, the details remind me very much the original. Especially the mixing knife, but also the four pins on the bottom of the mixing bowl, as well as the steaming attachment and the butterfly attachment for kneading dough. Xiaomi has been much more “inspired” by the original than by the design of the food processor itself.

As much as we’ve been waiting to write about the “Xiaomi Thermomix” aka Xiaomi Thermo Mi Mix (lol), I’m also convinced that the Ocooker food processor won’t be coming to Europe/USA. First, the competition with Thermomix and the LIDL device is huge and second, it should fail because of the language and community. The XiaoAI voice assistant has been around since the Mi Mix 3 and cannot be used in languages other than Chinese, the feature is always simply dropped for global versions. And similar to the 3D printers, the community (for example, for the Ender-3) is already huge for the Thermomix, so recipes would have to be implemented 1:1 to benefit from it.

If Xiaomi could do that, I would attribute a similar relevance to the Xiaomi Ocooker kitchen machine as to the first Mi Robot vacuum robot. It could establish a whole new clientele for the brand and contribute even more to its popularity. But then the price has to be right. This is just under $600 in the crowdfunding, after which it will probably be the equivalent of $916.63 (5999 yuan). With the typical surcharge for a global version, a price of around $1000 would not be unrealistic; we remember the Xiaomi Mi 10 (Pro).

Do you find the “Xiaomi Thermomix” just as interesting? How much would you spend for a possible global version?