Facebooks “Oculus Go” VR-Glasses were made by Xiaomi

5 Kommentare May 7, 2018 by Maike
Hey, guys! Just a heads up: The linked offer is already a bit older and the price of the gadget might have changed or it might not be available anymore.

An important cooperation: At CES, Facebook announced new details about the VR glasses “Oculus Go“, revealing that Xiaomi and Oculus have probably worked together more often in the past. For example, the PR glasses are manufactured by the Chinese technology giant Xiaomi, and the Chinese are also launching their own variant for China. The VR glasses now released by Facebook do not need a cable, a computer or a smartphone. 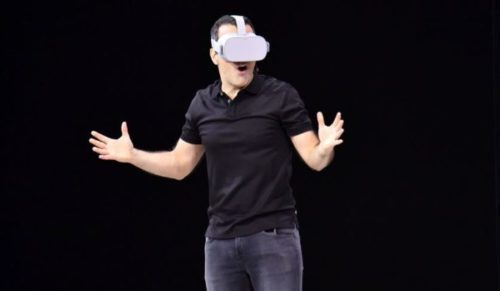 Affordable (and wireless) VR glasses have so far only worked with a few, but usually expensive smartphones. With its independence from PCs and cables, Facebook wants to overcome the obstacles it has encountered so far. As one of the few stand-alone headsets (no smartphone required), the glasses only cost about 200 dollar, which is very affordable compared to other stand-alone models such as Lenovo’s “Mirage Solo” and HTC’s “Vive Focus”. Competing models from HTC and Lenovo cost twice as much.

According to Facebook, setting up the device should not take longer than five minutes. Various settings are made on the smartphone in the Oculus app, which is available for all current Android and iOS devices. This means that the headset is not completely self-contained after all. The VR games, 360° videos and apps can also be selected in the glasses themselves. The contents are stored on the memory card of the headset. This offers space for up to 32 GB in the cheaper version, and 64 GB in the somewhat more expensive version.

The battery should last about three hours, which also applies to the subsequent charging. The sound is provided by spatial audio drivers that are integrated directly into the headset. But if you prefer headphones, you will be happy about the 3.5 mm jack. The “breathable fabric and soft, adjustable straps” used (at least according to the advertising) should ensure good wearing comfort.

The Chinese VR glasses will appear under the name “Mi VR Standalone” and come along like the Oculus Go with a built-in Qualcomm Snapdragon 821 processor. This processor is in the first Google Pixel and other powerful smartphones. An old acquaintance is responsible for the cooperation, Facebook’s Vice-VR-President Hugo Barra was previously employed at Xiaomi.

The Mi VR Standalone and the Oculus Go share the same design and also the functions are identical. The Mi VR apparently does not have access to the Oculus ecosystem and gets its own SDK (Software Development Kit). But Oculus can easily transfer content to the Mi-Glasses. With the new system it is also possible to load films directly onto the glasses, which can be obtained from Xiaomi via the Mi-Appstore (Mi Market).

The VR glasses are designed to make it easier for those interested to immerse themselves in the world of virtual reality. This means that cables, sensors or the smartphone are not included in the operation and scope of delivery. Both glasses have a 2K display. A new generation of lenses and a high-quality audio system are also to be installed in the Mi-glasses. A 3.5 mm jack output allows the use of headphones as with the Oculus Go.

When looking at the technical data, there are few differences between the glasses from Xiaomi and facebooks of new VR glasses. In fact, the Mi VR is only designed for the Chinese market, Facebooks glasses for the whole world. If there are more news from Xiaomi’s virtual world of technology, we’ll tell you more about it.