5 Kommentare May 10, 2019by Jens
Hey, guys! Just a heads up: The linked offer is already a bit older and the price of the gadget might have changed or it might not be available anymore.

The Xiaomi Photo Printer was announced in December 2018 and is now available in several China shops. It is the first printer to be sold under the “Xiaomi” brand. It is also easy to use outside China. 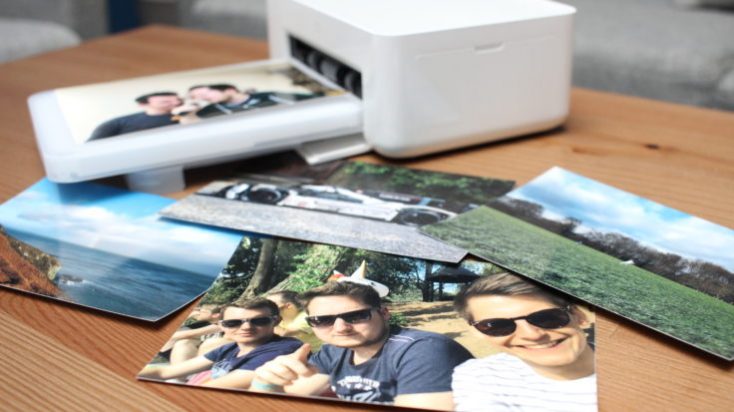 Last year, a small XPRINT printer was launched on the Chinese market, which was also sold by Xiaomi. The very small device was intended as an accessory for smartphones and could print small photos in a maximum size of 5.4 x 8.6 cm. The fact that the app required your Chinese phone number made the otherwise cool device uninteresting for the Western market unfortunately. But with the new printer it’s different.

It is now somewhat larger and with the dimensions 194 x 124.6 x 83.6 mm no longer intended for on the road. Externally it corresponds to the typical Xiaomi design in plain white. At first glance, it could be mistaken for a Bluetooth loudspeaker if you look at the ventilation on the back. On the upper side there is a single button for switching on the device. 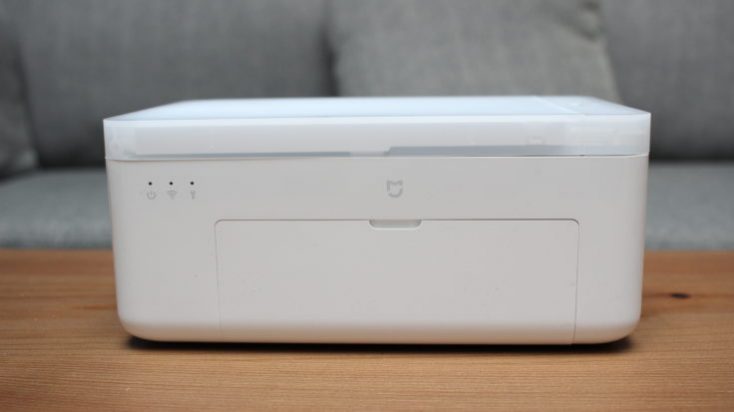 However, the printer does not take up much space. When not in use, the paper tray can be removed and placed on the printer, which is magnetic and holds it securely. Thus, the printer is also easy to transport and theoretically mobile; it just always needs a power connection, because a battery is not installed. A small point of criticism at the end: The corresponding power supply has only a Chinese plug, so you have to use an adapter.

The preparation before the first print is very easy, but I would like to explain it step by step. First of all, you need a printer cartridge and a set of photo paper. A set consisting of a cartridge and 40 sheets is available for about $20. So you should take care to order at least one of these sets when ordering. If you have this, it is quite fast.

The manual is only in Chinese, but explains everything in pictures. Summarized there are actually three steps: 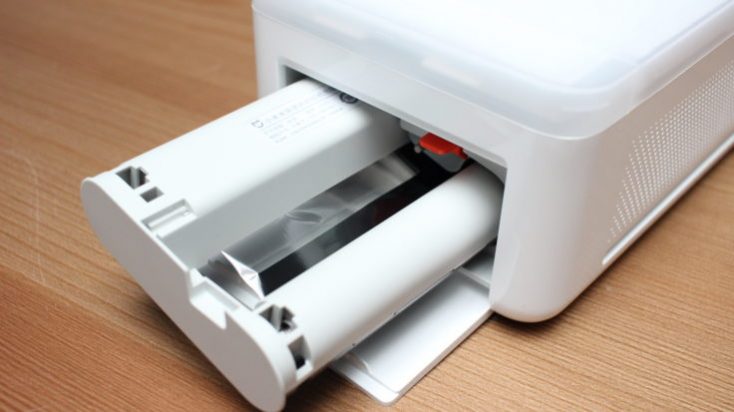 The printer is now ready for use and can be switched on with a simple push of a button.

It is not an ink printer and no liquid ink is used. Instead, thermosublimation printing is used, in which ink is applied to the photo paper under great heat. The paper is fed through the printer three times and then applied to each of the colour levels of yellow, red (or magenta) and blue (or cyan) one after the other (the fourth pass applies a protective film). This is also the reason for the supposedly low resolution of 300 dpi, because unlike ink printers, colours are not produced by juxtaposing different colours, but are printed directly with the matching colour.

The advantages of the printing process are the high print quality even at low resolution. In principle, thermal sublimation printers outperform other models in terms of colour depth and saturation. A disadvantage is the higher price, which we will also notice with the Xiaomi model. In addition, there is always an edge left over which can fortunately be cut off on a perforated line with the corresponding photo paper.

Setting up the app

Like almost all devices from the Xiaomi cosmos, the printer also runs via the Mi Home App. Here, one should again put the region on mainland China in order to find the printer in the app at all. But then the connection works without any problems, but at the beginning it takes a few minutes to synchronize and download the latest firmware. 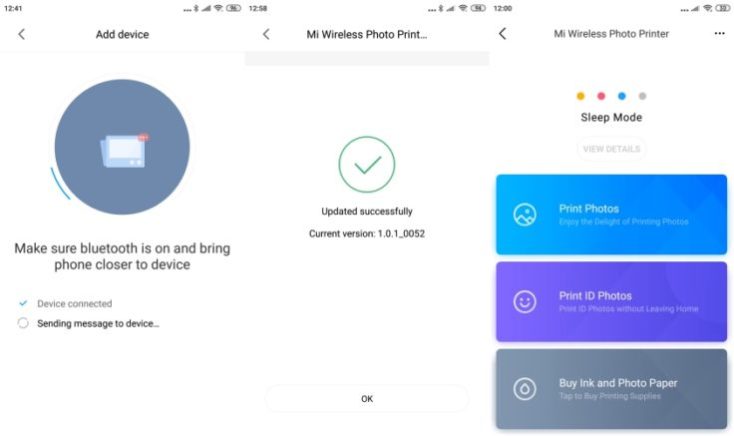 With the Mi Home App you can select any pictures and print them, ideally directly from the photos taken with your smartphone. Inside the app there are a few options to edit pictures afterwards. So you can crop the photos, edit them with different filters or adjust saturation, contrast and more.

A selected photo is then sent to the Xiaomi Photo Printer, or uploaded via the app and downloaded from the printer again, which sometimes takes some time (over a minute per picture). Nevertheless, this also works without any problems, you can even follow the individual printing steps live in the app. In theory, you can operate the Xiaomi Photo Printer at home in the WLAN while on the move.

Each individual print takes about one minute, since each photo is pulled through the printer four times and the different colours are applied one after the other. The fourth step applies a protective film that protects the photo from scratches.

iOS devices have it much easier. Since the printer supports AirPrint, images can be sent directly from the iPhone to the printer, which works a bit faster.

You can also print photos directly from your PC. All you need is a printer and computer in the same network, then you can select the printer as usual under Windows.

The printed photos have the standard size of 15 x 20 cm. Using the corresponding option in the MI Home App, passport photos can also be printed in various sizes. The quality of the pictures is convincing and there is no need to hide them. Sometimes there are not completely clean colour transitions in larger areas, especially in less than ideal lighting conditions. However, these are problems that occur with the printing process used and none that are limited to the Xiaomi printer. For almost all applications in private use, the quality of the images is more than sufficient. 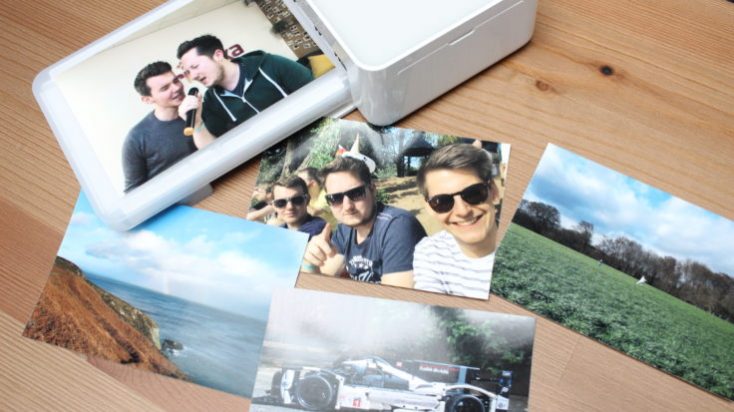 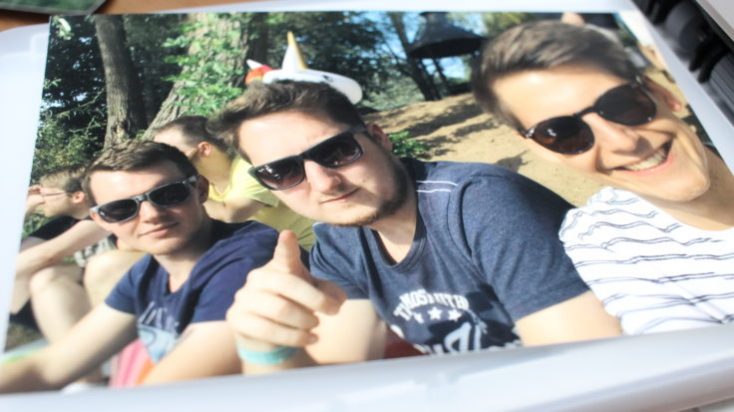 This device is a very good photo printer – also for this price. Other thermosublimation printers also cost about $100 and more. Then there are the regular acquisition costs for new cartridges and the photo paper. In addition, one has to resign oneself to getting a Chinese manual and a Chinese power plug, even if both do not really limit the use.

(A comparative model, for example, is the Canon Selphy, which works according to the same principle. Here, the purchase price is also about $100, the cartridges and the paper are even cheaper.)

The clear advantage of the Xiaomi Photo Printer is that if you occasionally want to print photos, this is a practical solution for your home. The printer looks stylish and doesn’t take up much space, and fits in almost every apartment. Setup and operation are quickly understood and the quality of the prints is very good. And if required, the printer can also be quickly packed and set up in another apartment. The possibility of taking photos together and printing them out together is probably one of the printer’s strengths anyway. In theory, you can use the Xiaomi Photo Printer for a photo box at a party.