2 Kommentare March 10, 2018by Thorben
Hey, guys! Just a heads up: The linked offer is already a bit older and the price of the gadget might have changed or it might not be available anymore.

In the second half of the year, Xiaomi tended to serve the high-priced smartphone market by introducing the Mi Mix 2 and Mi Note 3 on the same day. However, the manufacturer publishes budget smartphones under the name Redmi. New representatives for this category are the Xiaomi Redmi 5 & Xiaomi Redmi 5 Plus. We have now tested the latter and show you how it competes against the company’s own competitors and for whom purchasing the smartphone is worthwhile. 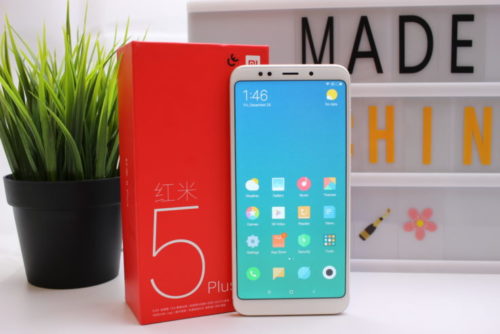 If you look at the published images of the new Redmi derivation, the smartphones look like a coherent successor. Particularly striking is the omission of the touch-sensitive keys, which have been replaced by on-screen keys. Generally speaking, the changes are not too major, but quite large enough to give the device a 2017 look. The upper and lower screen edges are smaller and the corners of the case are rounded. Xiaomi is rumoured to treat the Redmi 5 Plus like the successor of the very popular Redmi Note 4, and the common features cannot be denied. 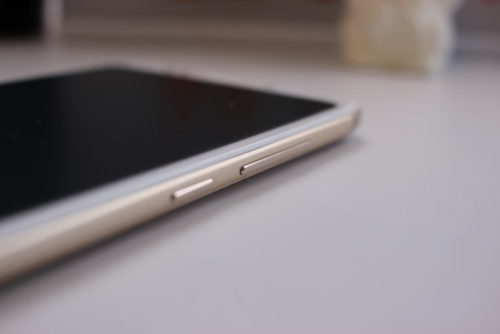 The biggest difference is probably the size. With a length of 15.7 cm it is about 5 mm longer than the Xiaomi Mi Mix 2, but with 7.44 cm it is slightly narrower and with 0.8 cm nice and slender. The total weight of 179.5 g gives the device a pleasant lightness. To my surprise, the 5 Plus fits well in the hand, the slightly smaller width is noticeable. Many of you voiced your displeasure of the size after the announcement. If I want to open an app in the upper left corner of the screen as a right-handed user, it doesn’t work. Nevertheless, the handling is very pleasant for me personally. 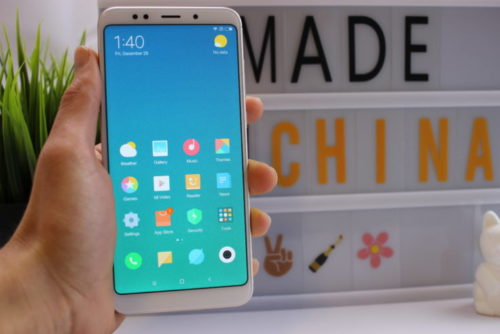 This is also due to the rounded design of the phone, which is particularly noticeable on the back. Even the housing frame is bent and accommodates the Nano-SIM slot on the left, as well as the power button and volume rocker on the right. While you have a Micro-USB port on the bottom, the Xiaomi Redmi 5 Plus has a 3.5 mm jack socket and an infrared transmitter on the top. The back of our test model is champagne gold and reminds us of the note 4, the camera lens is mounted at the top, which is surrounded by a gold edge like the Mix 2. Underneath is the flash and the fingerprint sensor. Below you will find the Mi logo. 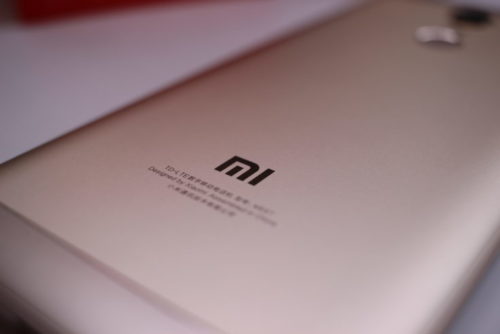 The workmanship is, as you are used to from Xiaomi, first-class. Nothing wobbles, there are no unwanted gap dimensions. It looks simply very high quality and impresses with very good build-quality.

That the Xiaomi Redmi 5 Plus is so large is of course due to the 5.99 inch display that Xiaomi uses here. The elongated design is due to the 18:9 aspect ratio, which was established in 2017. Xiaomi relies on an IPS LCD display, which occupies approximately 77% of the front side. The resolution is 2160 x 1080 pixels, which is more than adequate for such a display size. This results in a pixel density of 403 ppi, i. e. pixels per inch – an average, but not a bad value.

When it comes to brightness, the phone from the Redmi range doesn’t convince me that much. It is bright enough, but that’s all. A matt display foil has been applied by the manufacturer to enhance this effect. It might be better to invest in an alternative foil. 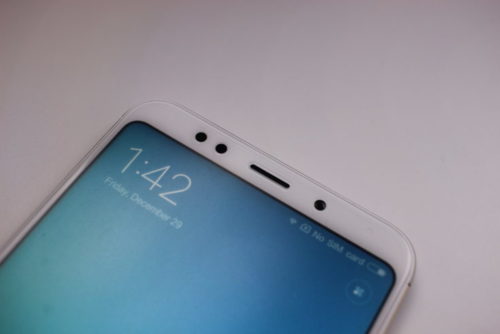 The capacitive touch screen is very touch-sensitive and reacts promptly to input. Of course, Multi-Touch is no problem at all. One positive feature is that the panel is protected with gorilla glass from the Corning company.

Hardware: Stagnation instead of innovation

I find it a bit difficult to classify the installed hardware components. The Snapdragon 625 is by no means a bad processor. In contrast to the direct predecessor a step forward, but not as an unofficial successor of the Redmi Note 4. Since the Mi A1 is already equipped with the same CPU, you might expect something as fresh as the Snapdragon 636. 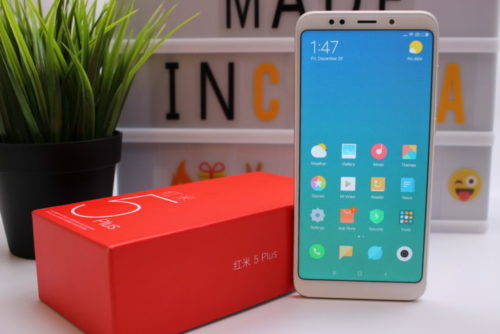 The eight Cortex A53 cores clock up to 2 GHz each and are supported by the Adreno 506 GPU as a graphical computing unit. Due to the 14 nm architecture it is particularly energy efficient, as many owners of a Redmi Note 4 can confirm. The Redmi 5 Plus is equipped for 3D applications and, thanks to the choice of 3 or 4 GB RAM, is also perfectly suited for multitasking tasks. The mobile phone appears with either 32 or 64 GB, but both capacities can be expanded with a microSD card.

Because of the same CPU and the same memory combination, we get very similar benchmark results as with the already mentioned Xiaomi devices. These values are quite solid and confirm that we are holding a mid-range smartphone in our hands. 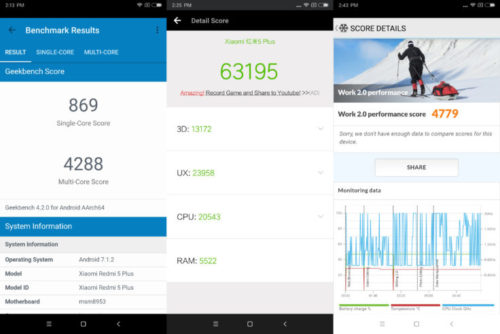 Camera: Nothing to complain about

In contrast to many smartphones from 2017, Xiaomi does not integrate a dual lens camera in the Redmi 5 Plus. As with the Mi Mix 2, a single lens should suffice, which also resolves with 12 megapixels. In addition, there is an aperture of ƒ/2.2, which should allow a little more light on the sensor in poorer light conditions. There is also a dual LED flash for night shots. 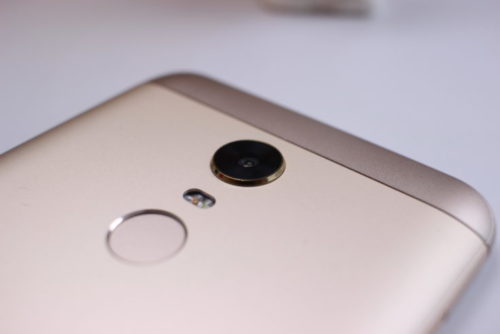 The camera does not produce bad pictures, the results are definitely impressive. It’s nice that it triggers quite quickly, so that you can also catch the moment you want to photograph. The colours are rich and the autofocus also works reliably. The Redmi 5 is not a replacement for a digital SLR camera, but it doesn’t have to be. It makes good photos for everyday use. 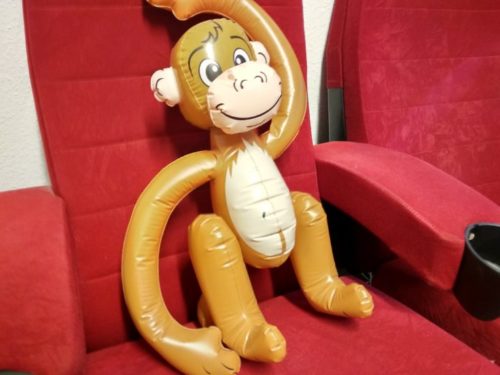 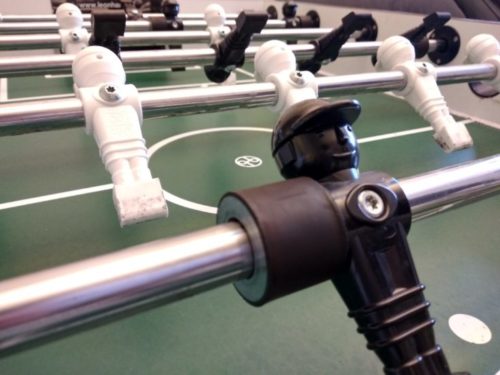 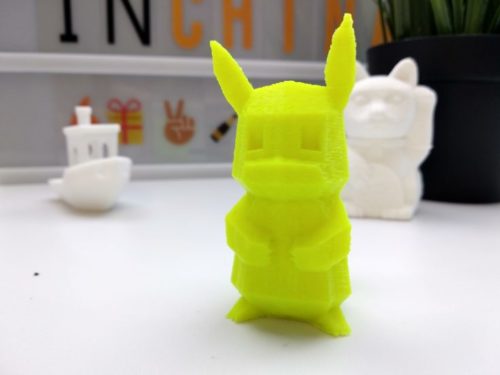 The front camera offers a resolution of 5 megapixels, which is still acceptable in this medium price segment. The results are on a good level: colours are accurately reproduced, even if a slight gray tint is not absent. However, this is still limited and does not attract attention. A positive feature is that a front LED is built in, which switches on automatically when the light is low and illuminates the picture properly. 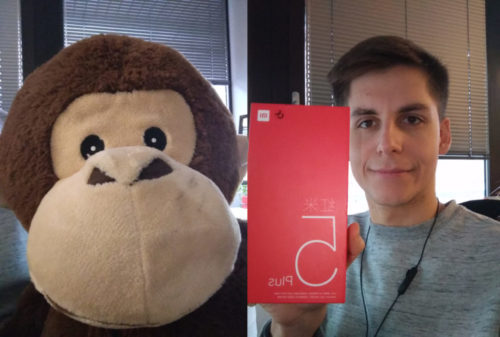 While manufacturers such as Doogee are giving away ever-increasing battery capacity for some of their models, Xiaomi always manages to achieve very solid battery life through software optimization and the use of energy-efficient processors. In this case, the capacity of 4,000 mAh turns out to be relatively large again. With MIUI 9 you can expect a good battery life that doesn’t require daily charging.

In the benchmark, the Redmi 5 Plus really has a very strong value. It reached a remarkable 11 h 30 min runtime, with medium brightness, switched WLAN and switched on mobile data. The runtime is therefore definitely a plus point of the smartphone.

Since the Redmi 5 and Redmi 5 Plus are based on the current generation of Xiaomi smartphones, the smartphone is equipped with MIUI 9. After the installation the update to MIUI 9.0.4.0 was already available. We are in the stable version here, not in the beta anymore. However, the new Redmi devices are so far only equipped with the Chinese ROM and not with the Global ROM. That means: English system language, no Google services by default and some Chinese bloatware. A Global ROM is not yet available, but you can easily download the Google Play Store.

Just follow these simple steps: Settings -> Additional Settings -> Privacy -> Activate “Unknown Sources”. This step requires that you have inserted a SIM card, but the system also alerts you if this is not the case. Then go to the Mi App Store and search for Google. When you start the Google Installer, it will guide you through various installations of the Google Framework and finally to the Google Play Store. Afterwards you should restart your device and can use the Google Play Store as usual. This process takes about 5 minutes and is easy to accomplish. 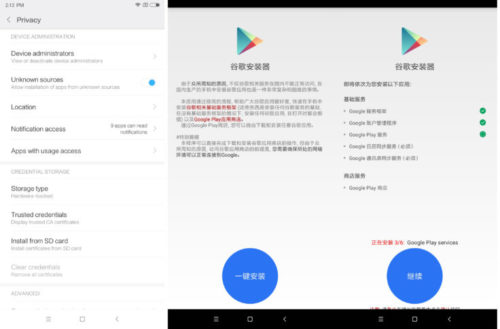 A smartphone is a phone plus Internet. Therefore the manufacturer has implemented the LTE Band 04, which is important for Northern America. Furthermore there is 802.11 b/g/n Wi-Fi for home use. Even tough the current ac standard would have been desirable. 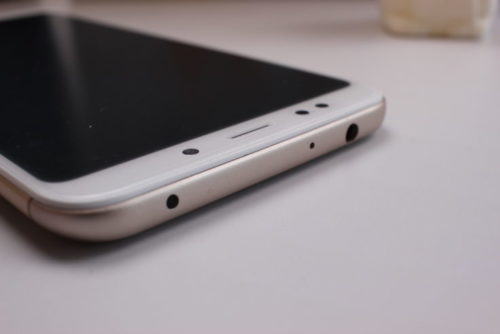 There is also Bluetooth 4.2, GPS, A-GPS, GLONASS and an integrated FM radio. However, the Redmi 5 Plus is charged via a Micro-USB port. That’s not wrong, but in my opinion a USB type C connection would have been possible in this price range.

In return, many users will be pleased with the 3.5 mm jack plug that has been maintained. The infrared sensor on the top of the phone is another thing to hold onto. This is known from some Xiaomi devices and can prove to be quite practical in everyday life. Another practical feature is the fingerprint sensor, which finds its place on the back of the Xiaomi Redmi 5 Plus and reacts very quickly and reliably. 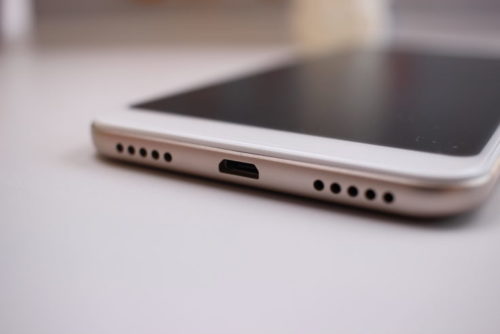 For the packaging design Xiaomi seems to have copied something from the OnePlus colleagues. The box comes in a bright red and puts the “5” clearly in the foreground. If you open the packaging, Xiaomis also reveals typical white. Inside there is a charger, micro-USB cable, SIM needle, instruction manual and silicone case. 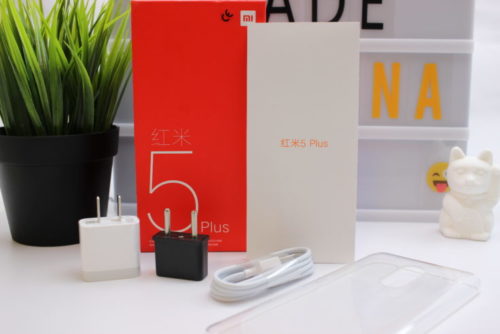 Conclusion for the Xiaomi Redmi 5 Plus

To make it short: The Xiaomi Redmi 5 Plus is self-confident for me and is a good smartphone. The design and the high-quality workmanship, the sufficient performance, the long battery life and the fingerprint sensor should definitely be emphasized positively. The camera and the display also make a good, but not a phenomenal impression. There are definitively some issues concerning connectivity: no ac-WLAN and no USB-C.

However, I find it quite difficult for the Redmi 5 Plus in its own Xiaomi ecosystem. The niche for the device is quite small. Many people don’t want such a large display, the performance has not improved compared to the Redmi Note 4 or Mi A1. Those who already own one of these devices will probably not upgrade. However, if you need a new smartphone you can pick the Redmi 5 Plus without hesitation.