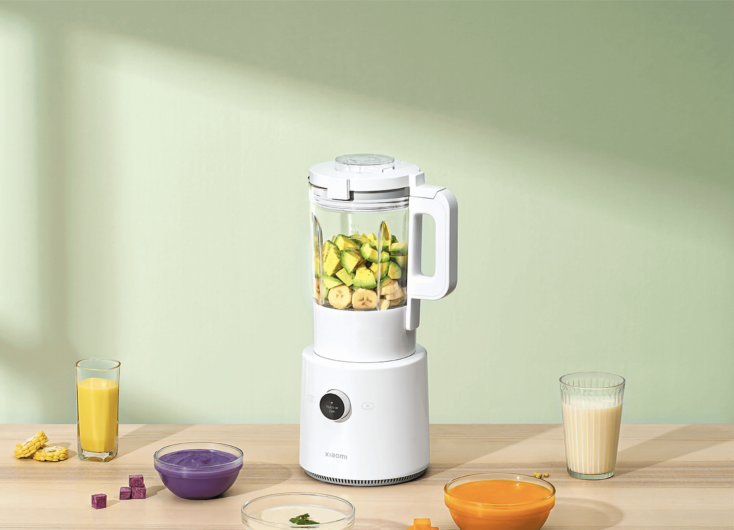 The Xiaomi Smart Blender apparently comes from the same design forge as the smart rice cooker or the popular Air Fryer. The 43 cm high blender is mainly made of white plastic, the base is equipped with two buttons and an OLED display. On the left is a “schedule” button, on the right is the “cancel” button. As with the Air Fryer, the OLED display is not only a display, but also a rotary switch for the different modes. In manual mode, for example, you can use it to set the speed of the blender. 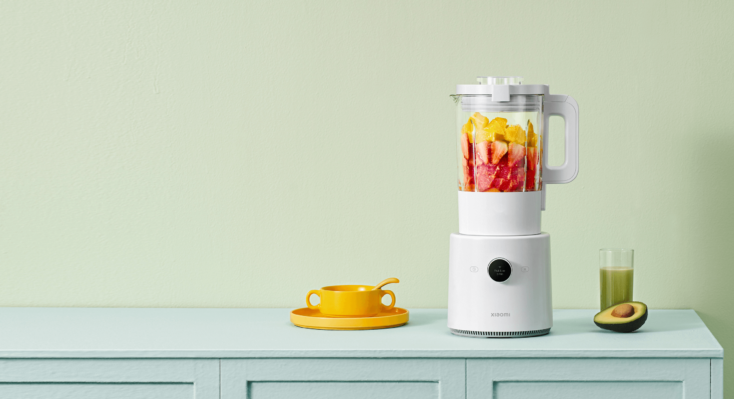 The mixing bowl is mostly made of borosilicate glass, which makes it very temperature-resistant. The capacity is up to 1.6 L, but for hot drinks this is stated as up to 1200 Ml. It is also equipped with four inlets, which should ensure that the ingredients are mixed evenly. The glass and base are magnetically connected so that the blender notices if the mixing bowl is not inserted correctly. Even if the lid is opened, the Xiaomi Smart Blender automatically stops the blending process.

However, this magnetic induction not only ensures safety, but also heat. Like a Tokit OmniCook, the contents of the mixing bowl can be heated, a unique feature for a blender. With up to 950W of power, the integrated induction plate can heat drinks like hot chocolate, for example. The important difference to a Tokit OmniCook or Thermomix, however, is the temperature; the Xiaomi Smart Blender is only suitable for cooking to a limited extent. At least heating soups is supposed to be possible.

Inside is a 1000W motor, a healthy average for such a stand mixer. However, the power in watts alone is not enough to determine the blender’s effectiveness. The blade is just as important. The Xiaomi Smart Blender even has eight stainless steel blades! That is an above-average number, especially since it is arranged in three layers. The upper layer, for example, is supposed to chop large pieces directly, while two blades underneath the middle layer chop the remaining pieces – very well thought out. The blender is equipped with a Hall sensor that can automatically adjust the blending power. The power is divided into nine speed levels, and crushed ice is also possible.

And it wouldn’t be a Xiaomi product if it wasn’t also smart. You can integrate the Xiaomi Smart Blender into the Xiaomi Home app and use it to create a schedule, start the blending process on the go or get inspired in the recipe world. Unfortunately, this still requires preparation and follow-up. In theory, however, you can prepare all the ingredients for a smoothie in the evening, put them in the blender and then have the blending process start automatically in the morning. To rinse the blender jug, Xiaomi recommends simply blending water at high speed. Unfortunately, there is no information on whether the blender jug is also dishwasher-safe.

We had the pleasure of drinking a freshly prepared smoothie from the Xiaomi Smart Blender at the Xiaomi event in Paris. It tasted good – probably less because of the blender than because of the ingredients. No wonder, the Smart Blender also has enough power and a well-designed blade. The heating function is also interesting. Smart is once again a gimmick, do you really need that with such an appliance? We doubt it. It is not yet available in the global version and the import prices for the Chinese version are partly unrealistic. For under 100€/$100, it would simply be a good all-rounder like the Air Fryer, provided we like it in the test.