3 Kommentare June 17, 2021by Thorben
Hey, guys! Just a heads up: The linked offer is already a bit older and the price of the gadget might have changed or it might not be available anymore.

Summer is coming! Get the cooling effect at home with the Xiaomi Smartmi Standing Fan 2 for $79.99 from Amazon.com or at Amazon.co.uk for £59. You can also get the Xiaomi SMARTMI standing fan 2S for 96,99€ from Amazon.de.

Although the Xiaomi fans are certainly not new, I only really got to grips with them during the first heat wave this year. Without further ado, I ordered the Xiaomi Smartmi Standing Fan 2 in order to fight the temperatures. And even though for around $100 is a lot for a fan, I don’t regret a single cent of it. 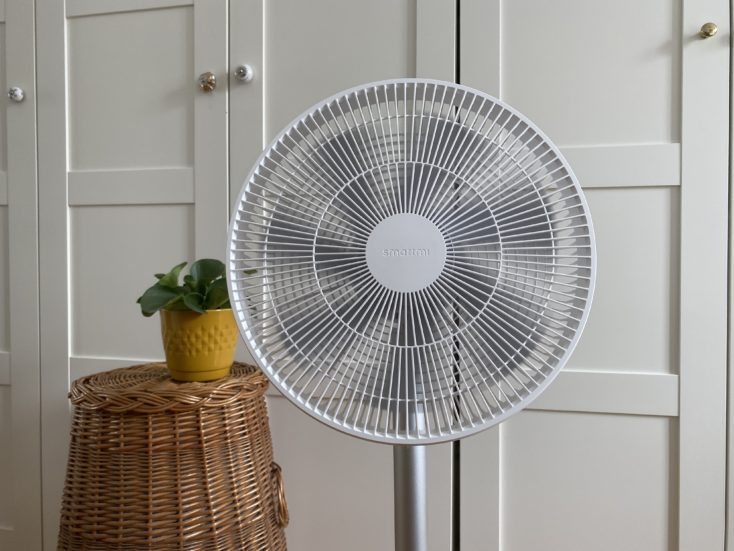 The smart fan from the second generation comes unassembled in a brown box, which is similar in size to my Dreame V9 box. The assembly of the fan does not have to scare you off, the assembly is done in a few minutes. Besides the components there is a manual, which in this case was also in English and therefore helpful. But even without instructions the assembly is very logical. 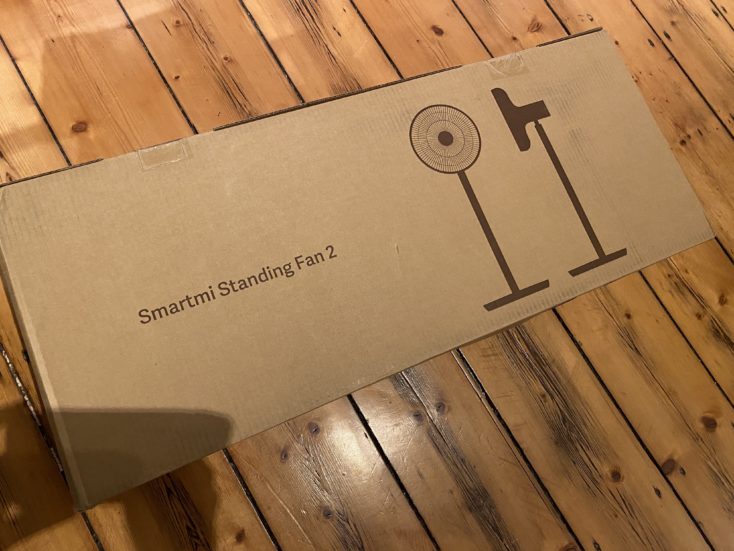 You start at the bottom, i.e. with the round stand, which also provides the power supply for the fan. On top of that is the fan pole, where you can orientate yourself by the contacts on the bottom. Here there is only one correct way to mount the rod. This is then fastened with a screw in the scope of delivery using a hexagon key. 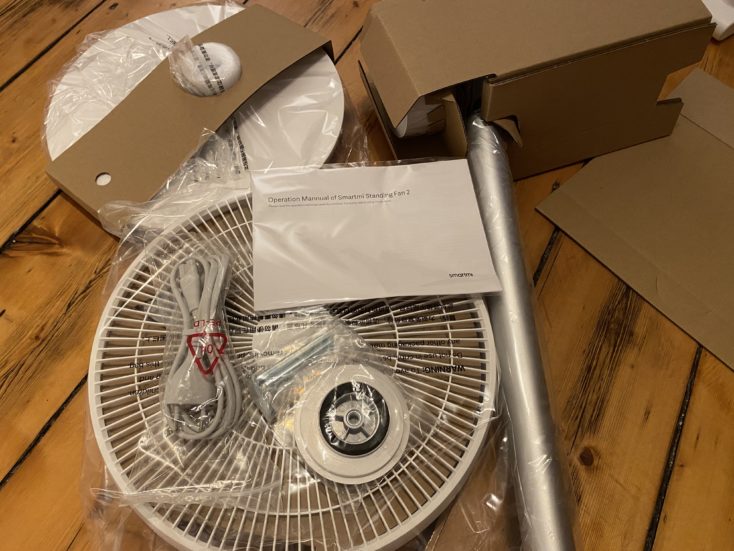 Then you have to mount the protection cage including the rotor blades. For this purpose, the back of the grille is placed on the fan head and the nut is fixed on it. The rotor can then be attached to this and then the front of the protective hood can be screwed on. This must be fastened with a small screw at the bottom. You need a screwdriver, which is not included in the delivery. Alternatively you can use a small knife or something similar.

The Xiaomi Mi Standing Fan 2 and the Mi Standing Fan 2S are almost completely identical, they only differ in the built-in battery. The Mi Standing Fan 2S is equipped with a 2,800 mAh battery, the 2S (here in the review) is not. The battery allows an operation without the power cable of up to 20 hours on low setting. Unfortunately, app control is not possible during battery operation.

I personally chose the Standing Fan 2 because I knew that the fan would be used 95% of the time in the same place anyway and I could therefore do without the battery. Even if I want to position it somewhere else, I have a power socket nearby.

Simple and modern – that’ s Xiaomi

Basically, all Xiaomi fans released so far look quite similar and so it might be difficult to distinguish the Smartmi Standing Fan 2 from for example the Xiaomi Mi Fan 1C. The Smartmi Standing Fan 2 is 96 cm high and cannot be adjusted in height. This is even different with the cheaper model, the 1C is said to be height-adjustable. In my living room and my furnishing style the fan looks really good and this probably applies to most apartments. The white plastic and the metal fan rod are simple, but modern and strikingly unobtrusive. 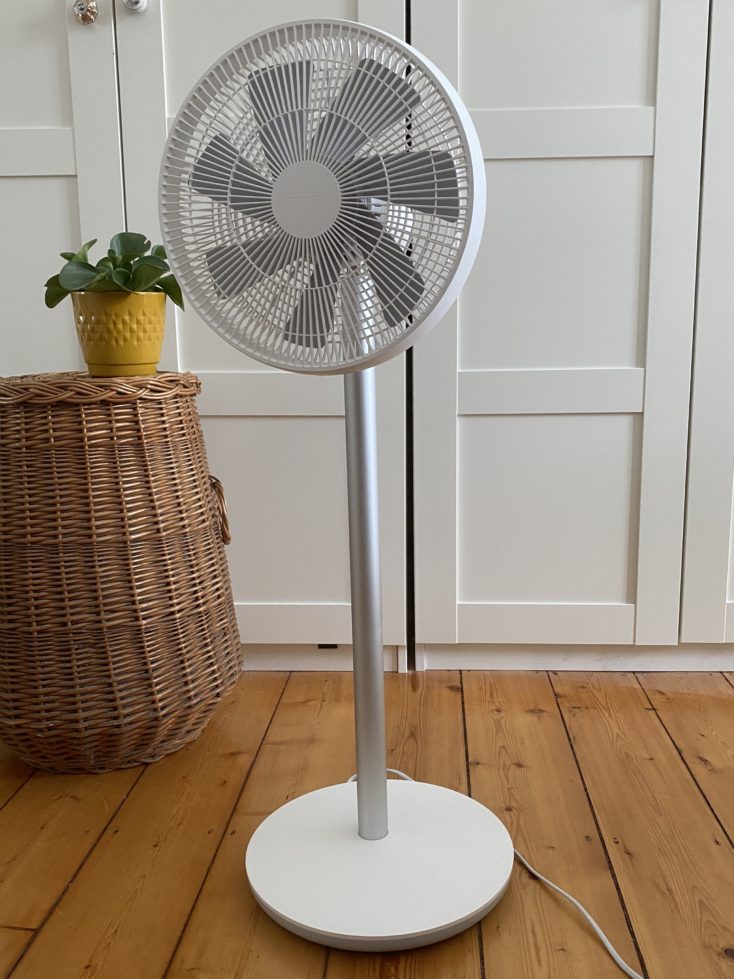 The workmanship is commensurate with the price, although the standing fan does not appear particularly robust. Especially the protection basket is “only” made of plastic, so it could theoretically break if it should fall over. But this shouldn’t happen, thanks to the large base the fan has a good stand. Nevertheless, it is not so heavy that you could not easily carry it to another position. The fan only wobbles slightly when the function keys are pressed, but since you probably use the app control anyway, this is negligible. 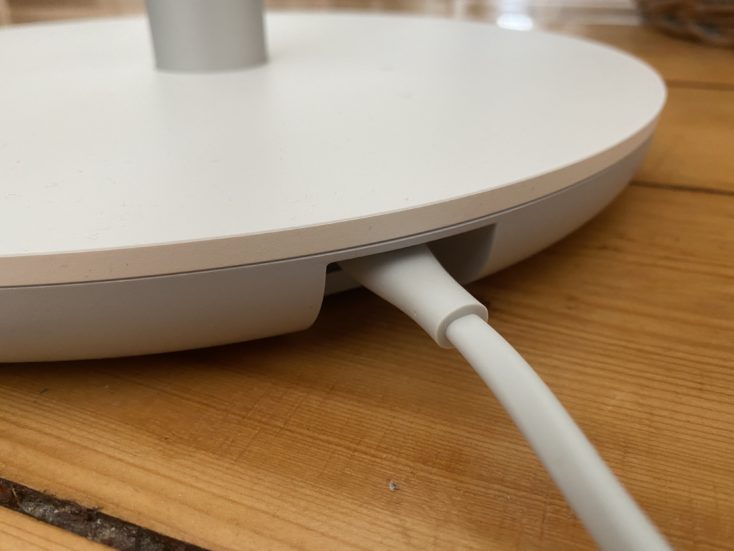 The fan can’t be adjusted in height, but in inclination. Here you have an angle of about 30°, in which the rotor blades can be directed a little bit upwards or even a little bit downwards. In practice I have not used this so far, but if you want to cool your feet explicitly or lie on a loft bed, this can be practical. 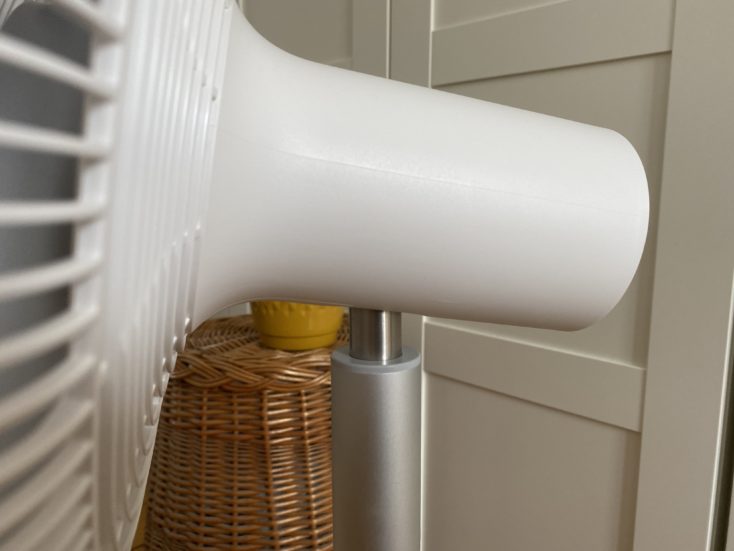 Operation on the fan

Xiaomi’s Smartmi Standing Fan 2 can either be used on the fan itself or via the Mi Home app, which many of you may already know from a Xiaomi vacuum robot. There are two buttons and five status LEDs on the fan. With the button on the top you can switch the fan on (hold it down for a long time) and switch between the four speeds. On the back of the fan head there is also a button for changing direction. 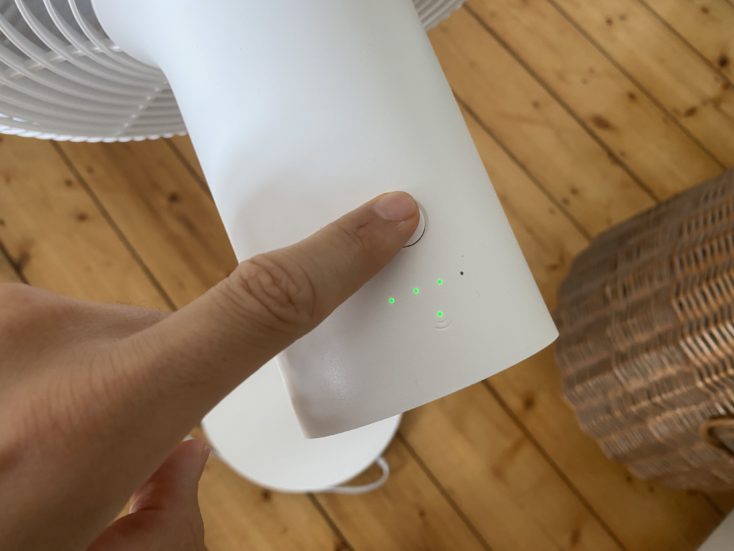 The four status LEDs indicate the speed setting of the fan. There is also an additional LED for WiFi connection.

However, the stand fan only unfolds its full potential via the app control, after all it is a smart gadget. With the Xiaomi Home App (download for Android and iOS) you can remote control the Smartmi Standing Fan 2. To be fair, this works with all Xiaomi fans, even with the cheaper 1C. I have set up China as server, since my Xiaomi LDS vacuum robot also only runs on the China server.

The app gives you a lot more options than the fan control directly. In addition, you have the possibility to control the fan via the Google Assistant, which is especially helpful for switching the fan on and off and is very fast.

The difference in the speed levels is particularly noticeable. Instead of only four levels, the app gives you 100 levels directly, which you can choose between using a slider, making the setting almost “stepless”. Until about 25 you are in level 1, until about 50 in level 2 and so on.

You can also choose between a standard mode and a nature mode. In the standard mode the fan blows the air evenly with the same constant “speed”. In nature mode the Smartmi Standing Fan 2 imitates natural wind and varies the intensity. In any case, a slightly different algorithm always seems to be used here, I haven’t been able to determine a regularity so far.

Furthermore, there is a timer that you can also adjust with a slider. The maximum setting is 8h, probably as average length for a sleep. So you can fall asleep with the fan, but it doesn’t have to run all the time – very handy.

You also have the possibility to switch off the status LEDs on the fan and to activate a parental lock, so that the operation is only possible via the app. A bit annoying is the beep sound that the fan emits every time you change the settings. This can be deactivated via volume in the app.

What distinguishes the Xiaomi Smartmi floor fan 2 from the other models, especially from the cheaper Mijia Fan 1C? The motor. The second generation of floor fans works with a DC motor, while the Mi Fan 1C works with an AC motor. Thanks to the DC motor, the fan with 25W consumes less than the 1C (45W). This is of course nice when the fan runs a little longer at night. But you can set a limit for the fan with the timer.

However, because of the use at night, the volume was also an important purchase criterion for me. Xiaomi promises an operating volume of 29 dB for the Standing Fan 2, which is comparable to whispering. The cheaper Xiaomi fan 1C is 37.2 dB. Since we don’t have the 1C yet, we can’t make a comparison here at the moment. 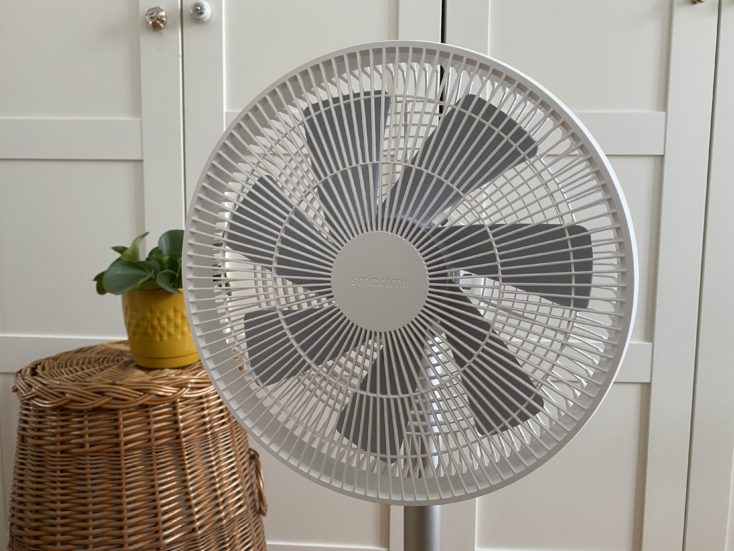 However, the Xiaomi Smartmi Standing Fan 2 at level 2, i.e. up to about 50 on the slider, is really whisper quiet and can hardly be heard. But you notice it more than you really hear it, which makes it easy to fade it out, especially at night. Only from the third speed on you hear the fan active, but I still find it pleasant in relation to the air circulation. Only at the highest level, which I have never needed before, is the Smartmi loud. Not so loud that it would massively disturb a conversation, but also not to be ignored anymore.

If someone had told me three years ago that I would buy a smart fan for around $100, I would have laughed. After just over a week with the fan it looks different, I am actually quite enthusiastic. No question, a $15 fan from the discount store does the same and provides a similar cooling effect. On the other hand, they are usually not of such high quality, don’t look so good and don’t have smart functions.

So you need the fan? No. Is it still worth its money? In my opinion, definitely. Especially for me as a smart home beginner, this is one of those gadgets that bring a certain technical luxury into everyday life and so far have worked perfectly. I hope that it will help me out a lot this summer and in the summers to come.

For whom the more than $100 is too much, I think, however, the Mi Fan 1C will give a very similar experience. Since the release will be delayed a bit I can only recommend the Smartmi Standing Fan 2.