1 Kommentare February 20, 2019by Thorben
Hey, guys! Just a heads up: The linked offer is already a bit older and the price of the gadget might have changed or it might not be available anymore.

One after the other. Xiaomi is engaged in active multitasking when it comes to smartphone production. After actively communicating that they are developing a double-fold smartphone, the next coup is about to begin. Xiaomi is probably working on a smartphone with a quad-edge display, i.e. an infinity display on all sides. The next smartphone trend in 2019? 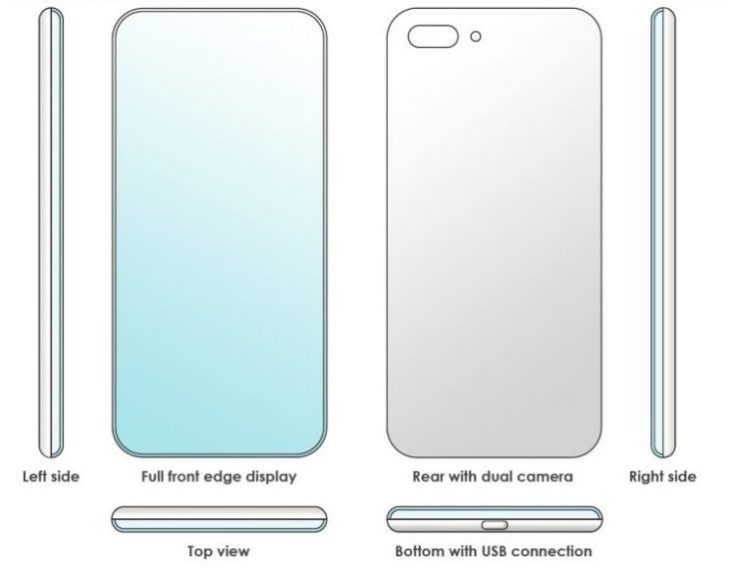 Where are the edges?

You probably know it best from the last Samsung smartphones of the Galaxy series. An infinity display goes over the edge, giving the smartphone a rimless look. Xiaomi is now adapting this style and presenting the first drafts of the design concept, which makes it clear that screen edges are a thing of the past. And that on all four sides! In fact, the concept also reminds us of the new Meizu Zero and Vivo Apex 2019.

They completely abstain from buttons, slots or other openings and are therefore completely waterproof. The new Xiaomi also seems to do without keys, but the patent application shows a USB type C port on the underside. A recess for the 3.5 mm jack connector is not visible. The front is also interesting. Although there is still no information about the display size, we also don’t find any indication of a front camera. Does Xiaomi manage to position it completely underneath the display or is it simply omitted?

On the back side, however, there is a dual camera including LED flash. The Xiaomi smartphone with quad-edge display doesn’t rely on a triple camera like the new Xiaomi Mi 9. A cutout for the fingerprint sensor on the back is not visible. So it’s quite realistic that it sits under the display as it does on the Mi 8 Pro.

There is still no official confirmation that this Xiaomi smartphone is really being produced. Since we find the approach quite interesting, we wanted to know what you would think of such a smartphone. Is such a rimless smartphone the goal manufacturers should work towards?